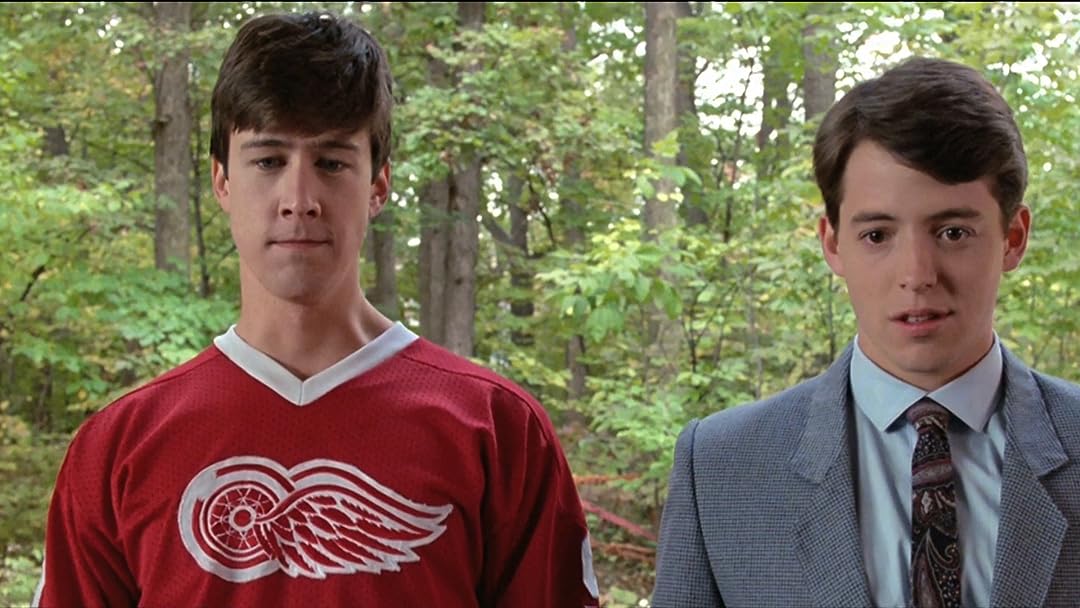 (4,796)
7.81 h 42 min1986X-RayPG-13
High school senior, Ferris Bueller, decides to cut school and is determined to experience a day of pure freedom with his girlfriend and best friend in downtown Chicago before graduating.

Leaves Paramount+ in 5 daysRentals include 30 days to start watching this video and 48 hours to finish once started.

amazon customerReviewed in the United States on November 12, 2019
5.0 out of 5 stars
Who doesn't love Ferris? Anyone?
Verified purchase
Saw this at the theater 3 times when it came out. Still love it. Recently watched with the family through Amazon connected to vid angel where you can choose filter preferences such as language. Fun to watch my teens laugh like I did when I first saw it.
20 people found this helpful

SAVOReviewed in the United States on September 5, 2019
3.0 out of 5 stars
Funny movie, with some rough language.
Verified purchase
Funny movie, but language is crude and inappropriate for anyone who prefers to use intelligent words to describe. Anyone sensitive to four letter words, such as ourselves, will not appreciate the vulgarity of speech.
19 people found this helpful

joel wingReviewed in the United States on January 7, 2021
4.0 out of 5 stars
John Hughes classic with teen rebellion angst comedy & lost white kid syndrome
Verified purchase
Ferris Bueller’s Day Off was another smash hit by John Hughes. Matthew Broderick played Bueller who was the most popular kid at his high school and liked to manipulate the system, specifically to cut school and goof off with his friends. As the title suggests the story is all about Bueller skipping school to run around Chicago with his girlfriend Sloane (Mia Sara) and his best friend Cameron (Alan Ruck). It’s full of teenage angst, rebellion, irreverence, comedy, along with some lost white middle class kid syndrome.

The first thing that stands out is the first person commentary by Bueller as he talks straight into the camera at the audience about what he plans to do. He fools his parents into thinking that he’s sick, then does the same thing to the school administration, and gets Sloane and Cameron and they have a down on the town. They go to a Cubs game, they go see some art, Bueller sings during a parade in downtown, etc. This is every kids dream of being able to skip school and hang out without their parents knowing. Along the way they throw in the teenage angst and lost white kids message such as in one scene where Cameron and Sloane say they don’t know what they want to do with their lives while they are growing up basically in a life of luxury as middle class Americans. Of course there’s plenty of jokes as well such as when principle Ed Rooney (Jeffrey Jones) tries to sneak into Bueller’s house and runs into all kinds of problems like a dog and Bueller’s sister. It’s a great mix.
C

Richard BrookesReviewed in the United States on June 10, 2015
4.0 out of 5 stars
Pure Fun
Verified purchase
A very entertaining movie that doesn't allow one to get bored. If you live in the Chicago area, this movie is a must to see. I particularly enjoyed the visit to the Art Institute, which is my favorite museum of all I have visited. Lovingly portrayed by the director, John Hughes, who obviously was as much enamored of the museum as I am. There are echoes of earlier Hughes films (The Blues Brothers) in the musical numbers The Polish Pride Parade sequence is hilarious. The one sobering incident in the film is the wanton destruction of a Ferrari 250 GT which any car buff will tell you is the HolyGrail of sports cars. I was reasonably sure that Hughes would never destroy such an iconic automobile but I had to resort to surfing the Net to be sure. Yes, it was a mock-up. Highly recommended film for when you need some light-hearted fun in your life. By the way, Jeffrey Jones does a marvelous job as the high-school principal who seeks to exact vengeance on Ferris for all times he has been made a fool of by the crafty student.
18 people found this helpful

MReviewed in the United States on July 10, 2021
1.0 out of 5 stars
different as an adult
Verified purchase
I remembered watching this movie as a child and love it. Now as an adult, I realized Ferris Bueller was just using his friend, never sorry for anything, and blame others for his misdeeds. The dean was hilarious then and continued to be now. Cameron needs a new friend who is less narcissistic and selfish.
2 people found this helpful

Barnard RollitReviewed in the United States on August 1, 2014
5.0 out of 5 stars
Worth Many Viewings…
Verified purchase
When it comes to getting his way, Ferris Bueller is not far short of a force of nature. Smug, self-centered and thoroughly full of himself, he has his parents, his best friend and most of the student body of his high school wrapped around his little finger. One of the few things that frustrates him is that he doesn't have a car—for reasons unexplained his parents gave one to his younger sister, one of two people who don't buy his act for a second. The other is Mr. Rooney, the high school principal determined to catch Ferris out on his latest caper and yet seems not at all equipped to manage it.

Make no mistake though, this film is not actually about Ferris but about his best friend Cameron, a repressed teen so sunk in hypochondriacal ennui you wonder why he doesn't just wink out of existence. But Ferris, though his main reason for stirring Cameron out of his slough of despond is in order to secure transportation for the day, is not wholly devoid of altruistic feeling. He puts a fair amount of effort into trying to get Cameron to respond to life, first by running a scam on Mr. Rooney and then…well, that's where the adventure begins.

ASZReviewed in the United States on September 3, 2018
1.0 out of 5 stars
dvd was damaged
Verified purchase
the movie was correct.

The dvd was skipping and stopping right from the start.
We switched dvd players and still having same issue.
The volume was very low, even having the tv on 60!

I submitted for a refund and got it the same night, but kinda sucked since we waited to watch this and it wasn't great.

6 people found this helpful
See all reviews
Back to top
Get to Know Us
Make Money with Us
Amazon Payment Products
Let Us Help You
EnglishChoose a language for shopping. United StatesChoose a country/region for shopping.
© 1996-2022, Amazon.com, Inc. or its affiliates