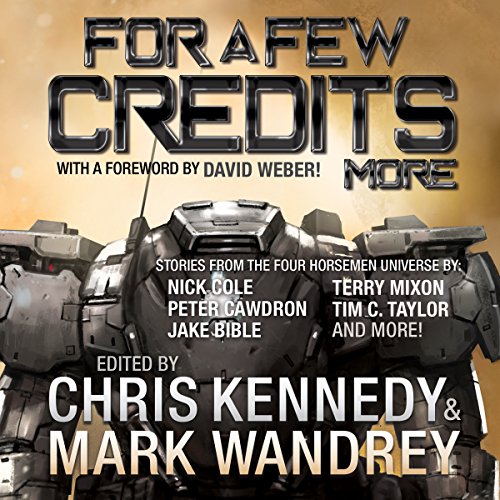 More authors. More stories. The same best-selling universe. It's the 22nd century. Humanity has taken its first steps into the galaxy, and we've found ourselves in a vast playground of alien races, environments, and cultures. As the newest players on the universal stage, though, our position is readily apparent - we're at the bottom of the food chain.

Welcome back to the Four Horsemen universe, where only a willingness to fight and die for money separates humans from the majority of the other races. While some of the stories in this audiobook deal with mercenaries, others introduce listeners to the other guilds, organizations, and races that make up the landscape of the Four Horsemen universe, and many of them provide background information to the mainline novels. There's even a new form of life to get acquainted with and a look at alien interaction at its youngest level!

Edited by best-selling authors and universe creators Mark Wandrey and Chris Kennedy, For a Few Credits More includes 16 all-new stories in the Four Horsemen universe by a variety of best-selling authors - some you may not have heard of...yet. It's a world where you can get anything you want. Some things, though, are only available for a few credits more!

Ray
5.0 out of 5 stars Fabulously Sized Mecha?
Reviewed in the United States on September 15, 2017
Verified Purchase
What sets the Four Horseman Series apart from other books that have Mecha, Aliens, Mercenaries, AI, Dog eat Dog universe, and Might makes Right is realism. How many books have you read about the heroic Humans go against the galactic hordes in their super duper Mecha and defeat them, and never talk about the little things. Such as what happens if your a bit overweight, OK obese, and you need to fit into a Mecha? In real life, Fight Pilots in the Navy have height and weight requirements. If you are not within them, and need to use the ejector seat for example, you might break your neck. Same thing with roller coast limits. It's refreshing to have a book address real world issues for Mecha, such as being over weight. In this universe, some mercenaries use the Series 7, vs. the newer 8, because of the size issue. Famously Sized is the term one retailer just started using for Plus Sized Clothes.

One of my favorite scenes from a previous book, Winged Hussars, is when the hero enters a Mecha that has not been customized for his size due to an emergency, and gets pinched on his private parts. I have never read another series that is realistic with Mecha, in a way that adds to the story. It's not an infodump, which Mr. Weber who did the forward and is an amazing author is famous for, but rather adds in a positive way to the story.

The Tech Manual for the series is A+. I have read all the books, and its refreshing how the universe stays pretty consistent and authors are not allowed to do crazy stuff that ruins the universe. There are limitations and rules in the universe, which makes it realistic. There is no FTL, Anti Matter bombs, transporters that work between star systems, moon sized spaceships, etc.

Do you need to read any of the other 6 books first? No. This one is a good stand alone read. The stories in a Few Credit More flesh out more of the 4 Horseman Universe, so if you have read the other books this is a great addition.

Is there anything I would improve? Glossary of Aliens at the back, I get confused beyond on the characteristics beyond the Tortantulas (think 1950 era sized spider monsters, with armor and weapons), Flatars (coolest aliens in the series), and Minsha (had issues with Iran).
Read more
7 people found this helpful
Helpful
Report abuse

JPS
4.0 out of 5 stars Short stories about (mostly) Mechanised Mercs
Reviewed in the United States on February 4, 2018
Verified Purchase
This is another collection of seventeen short stories about (mostly) mechanised mercenaries that take place in the Four Horsemen Universe, when Earth’s main role and export in a semi-anarchical and very unruly galaxy is the provision of mercenary military services through dozens of companies.

As usual in such anthologies, each reader will tend to have her or his favourite stories. Several stories are about inventions that could have military applications – such as Forbidden Science - or breakthroughs which could give one side a crucial advantage in a conflict as in Tinkerman. The later also happens to be one of my favourites as the hero, an ageing and retired CASPers mercenary is tracked down to his refuge in the North West of the United States on fake charges by those who want to get hold of his secret.

As usual also with this collection, you can expect appearances from Peacemakers – a sort of inter-galactic Police Force that sometimes seem akin to US Marshalls during the Far West. Some of them are honest and devoted to their job. Others are much less so and may go rogue.

Also, you will find the usual mix of alien species, including the vulpine and ferocious Besquith or Cochkalas, a mean badger-like species, among many others. Once again, my favourite story – and the shortest of all - is about a young of one of these alien species (the Tortantulas which resemble tarantula spiders) and its struggle to survive with the help of its little partner.

For strong stars for the whole lot and I am looking very much forward to the next anthology or full-blown novel.
Read more
One person found this helpful
Helpful
Report abuse

Christopher W
5.0 out of 5 stars Really good collection
Reviewed in the United States on February 12, 2019
Verified Purchase
Very pleased with this anthology. A wide range of stories set within this growing and massive universe. It has something for practically everyone. It's fun to see tie ins to other novels in the series and tales to fill in background and backstories to groups and events. Even the shortest story is exciting to read. It's a must have for a fan of the 4HU. Buy it and read it, you won't be disappointed.
Read more
Helpful
Report abuse

BrianBAlbany
5.0 out of 5 stars Filled with stories you'll want more of!
Reviewed in the United States on September 19, 2017
Verified Purchase
I received an advanced copy for free in exchange for an honest review. Then I bought it because it was everything I enjoy about reading. Just like all of the preceding books set in this universe, humanity is clutching desperately to the short straw, while a multitude of alien species seek our destruction. There are some really great reads, and I hope that many of them are followed up in future anthologies, or separate novellas, or even full length companion titles.
Read more
Helpful
Report abuse

Fantasy Addict 1030
5.0 out of 5 stars A fun collection of action packed stories
Reviewed in the United States on July 26, 2018
Verified Purchase
I like that this book had something for everyone. While most of the stories center around action, there are still stories that either focus on or include solid character development.
A full, review for each story will appear on my blog in time.
Read more
Helpful
Report abuse

donald thibodeau
5.0 out of 5 stars Great Anthology
Reviewed in the United States on October 1, 2017
Verified Purchase
I cannot tell a lie I love this universe. That the co creators have opened it up to not one but two anthologies is wonderful. These stories add to the existing universe in a well rounded fashion with a few looking like they could lead to full length novels. if your a fan of the 4HU please do not deny yourself the pleasure of reading this one also
Read more
Helpful
Report abuse
See all reviews

JD (Baen Fan)
3.0 out of 5 stars It's alright, but not enough GREAT stories, just ok ones.
Reviewed in Australia on December 11, 2017
Verified Purchase
Ok, I'm gonna be honest here. I didn't like this book. I'll admit, I don't generally like anthologies at the best of times, but I like this Universe and the other books in the series, so I really hope that this one is simply an aberation to the whole.

Out of the 17 stories, I only LOVED one of them. Five more were good, 6 were ok, and 5 were meh..
Most, if not all of them involved Peacemakers in some way, and I'm not sure if that is influencing my opinion. It's like all the authors looked at Peacemakers, and went "Oh, Shiny! Must include them!"

The standout story for me was Tinkerman. I was hoping that the bounty hunter at the start of the story was going to become part of the story, so it was a surprise when she gets killed. It then became a mystery to be solved as to why Tee is wanted, and why they keep trying to bring him in. Very Western in feel, the show down in the Main street at the end was excellent.

I've yet to buy the next anthology, but I'll get it in Jan 2018 (possibly when the next book gets released as well.

Side note for Chris and Mark: Until you get the Wiki set up and the Compendium/Encyclopedia/Manual done, could you include an appendix of all the different races with a description. Too many of them sound so similar and it gets confusing as to what they look like.
Read more
Report abuse

Scott Osmond
4.0 out of 5 stars Good Collection
Reviewed in Australia on November 24, 2018
Verified Purchase
This was a good collection. I like that the author's look at things from the alien pov. Means that we learn more about different species and how the Unity works without infodumps. Some were stronger than others. My favourite was Tinkerman. Verry western and shows a weakness in the mecha. Another strength of this series is the realism. From the day to day problems working in mecha to the cost of being a merc.
Read more
Report abuse

Marcel
4.0 out of 5 stars Four Stars
Reviewed in Canada on February 25, 2018
Verified Purchase
Liked the linkage in the short stories. Recommened read for sure.
Read more
Report abuse

Hedge Hog
1.0 out of 5 stars One Star
Reviewed in the United Kingdom on October 3, 2017
Verified Purchase
I only buy short stories by accident .
Read more
Report abuse
See all reviews