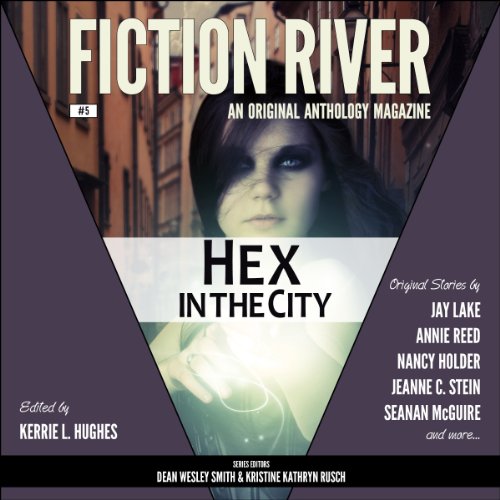 Urban fantasy offers a diverse playground for some extremely powerful stories. Professional writer and editor Kerrie L. Hughes pulled some fantastic tales out of 14 top writers for this fifth installment of Fiction River. Set in urban lands from modern Portland, to a future Detroit, to a wild Washington, D.C., and ending the tour in London, these top writers take the idea of "Hex" and stretch and twist it into stories with a magickal grip on the imagination.

LA in Dallas
4.0 out of 5 stars Meet the family
Reviewed in the United States 🇺🇸 on July 5, 2021
Verified Purchase
I will begin by explaining what I'm reviewing here. Seanan McGuire has written a lot of short stories in The Incryptid Series. You can find a couple dozen of the older ones listed on the Incryptid Short Stories page on her web site. (Note, she has also published many stories through her Patreon site. They are not listed on the the Incryptid Short Stories page on her website, although many of them are listed in her bibliography.)

The Verity and Dominic stories all take place after Half-Off Ragnarok and reflect the state of things as they were left at the end of that book. Half-Off Ragnarok had two main consequences for the future of the Incryptid world: Dominic De Luca is now irrevocably committed to Verity and severed from the Covenant. In fact, the Covenant believes he is dead, thanks to the extraordinary efforts of Sarah, who damaged herself modifying the memories of the participants in Half-Off Ragnarok. So, there are the promised spoilers: Verity and Dominic are now a couple (this will come as a surprise to precisely no one), and Sarah has hurt herself badly.

Verity and Dominic are driving from New York to Portland in a rented U-Haul truck so that Dominic can be introduced to Verity's family. They are driving because Verity has a colony of Aeslin mice to transport -- not easily accomplished by air. Also, Verity is taking the scenic route, to introduce Dominic to various folks. The first story in this series, The Ghosts of Bourbon Street, is a crossover, in that it also belongs to McGuire's Ghost Road series -- you meet Rose Marshall, the main character of those books. Some other old friends show up: the Carmichael hotel in Chicago, and the Swamp Bromeliad in Buckley Township, Michigan. This series of stories ends as intended, with Verity introducing Dominic to her family in Portland.

Most of the Antimony stories have no obvious relation to the events of Half-Off Ragnarok. One may suppose they occur before that. If you have read the first three Incryptid novels you have sort-of been introduced to Antimony, because she features heavily in Verity's recollections of growing up, as the annoying little sister who excelled in such Price family staple skills as extreme survival, setting traps, and demolition. Now, introduced to Antimony in person, we see that she has complementary memories of Verity and Alex as the older siblings who her parents (in Antimony's view) always seemed to value more than her. Antimony becomes a roller-derby skater in these stories. A word about the anthologies: I read only one non-McGuire story. Several reviewers of Glitter & Mayhem, mentioned the story about the dancing princesses, so I read that on, too. It was OK. Jammed appeared in Games Creatures Play, which appears to be out of print. I couldn't easily get a copy, so I listened to the audiobook version. Survival Horror is in the Anthology Press Start to Play -- I read none of the other stories. The Antimony stores were a fun intro to Antimony, whom I now look forward to encountering in the novels. They also introduce her cousin Elsinor Harrington, whose father is an incubus, making Elsie a succubus.

That brings us to Antimony's other cousin, Elsie's brother Arthur (Artie). We have actually heard quite a bit about Artie in the novels because he and Sarah are hopelessly in love, and Verity also tends to phone Artie when she needs geek skills. IM is really all about whether Sarah is going to recover.

Istas is a kind of fun character. We met her in the Verity Price novels, where she works as a cocktail waitress at the place where Verity works, and fights at Verity's side. She's a sort of werewolf/werebear (as is her main squeeze Ryan). But what's fun about her is her very direct, uncomplicated way of thinking and speaking.

The final story, Balance, is about a cuckoo who, as far as I know, appears nowhere else in the Incryptid world. I didn't enjoy this story as much as the rest.

In summary, these stories are a good way to meet the Price/Harrington families. I give them four stars, except for Balance, which rates only three.
Read more
Helpful
Report abuse

sylvester
5.0 out of 5 stars Outstanding
Reviewed in the United States 🇺🇸 on January 10, 2019
Verified Purchase
This is a series of short stories of the urban fantasy type. I had never heard of any of these authors. All the stories were quite good, and I will now be looking for other stories by these writers. I am not going to discuss the plots as I think "spoilers" are about as deplorable as it can get. I will say if you like stories by C.E Murphy, Patricia Briggs, Jennifer Estep, Jim Butcher, John Hartness, or others of their style and subject matter, you will like these stories. One of my favorite things is to read these anthologies to see new authors and new ideas.
Read more
Helpful
Report abuse

Lonnie-The GreatNorthernTroll-Moore
VINE VOICE
5.0 out of 5 stars Topnotch collection...
Reviewed in the United States 🇺🇸 on January 4, 2018
Verified Purchase
I got this collection because Seanan McGuire had a story in it, and it was great. I actually read Seanan's story several times before I actually ventured into the rest of the book. I found this to be book is topnotch. Of note was a story by Jay Lake which takes place right here in my hometown and a wonderful story by Annie Bellet... Seriously you don't want to miss out on this collection...
Read more
One person found this helpful
Helpful
Report abuse

yaratr
5.0 out of 5 stars For Seanan McGuire's and Jeanne C. Stein's short stories
Reviewed in the United States 🇺🇸 on April 2, 2014
Verified Purchase
Only read Seanan McGuire's and Jeanne C Stein's short stories- they were both awesome! One of my fave series was the vampire bounty hunter Anna Strong series and was so bummed when it came to an end. It was great to see her and Frey again :-) As for Seanan's story, it was my first time reading anything from the InCyptic series and it was great! I'll definitely be looking for the books to this series now, it was really entertaining.
Read more
One person found this helpful
Helpful
Report abuse

Mike
5.0 out of 5 stars An Excellent Collection!
Reviewed in the United States 🇺🇸 on July 8, 2015
Verified Purchase
The book arrived in excellent, readable condition. It's been fantastic to read as I'm an Urban Fantasy fan and also took a few workshops at a writing conference from Kristine Kathryn Rusch and Dean Wesley Smith. If you're so inclined and have the opportunity, take a workshop from them, you'll be glad you did.
Read more
Helpful
Report abuse

Kindle Customer
5.0 out of 5 stars Urban Fantasy at its Best
Reviewed in the United States 🇺🇸 on July 28, 2014
Verified Purchase
An excellent collection of stories once again from Fiction River. Some captivating ideas and characters that leave you wanting to continue their stores. Stories range from poignant to leaving you entranced and smiling. Very enjoyable read!
Read more
Helpful
Report abuse

A. D. Hale
5.0 out of 5 stars Great reading
Reviewed in the United States 🇺🇸 on December 16, 2016
Verified Purchase
I liked this anthology because it gave me a sampling of many different authors and some great tales for a cold winter's night.
Read more
Helpful
Report abuse

Sadie Röckins
3.0 out of 5 stars Meh.
Reviewed in the United States 🇺🇸 on February 10, 2016
Verified Purchase
I read about half of it. The stories are ok but I found at least a couple typos. I can't stand that. Probably won't finish it.
Read more
Helpful
Report abuse
See all reviews