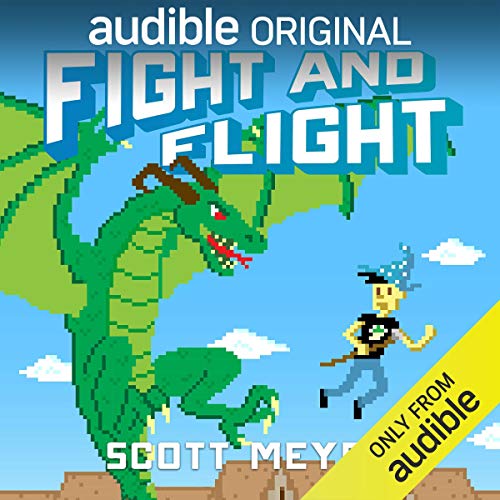 Martin and his friends discovered that their world is computer generated and that by altering the code, they could alter reality. They traveled back in time to Medieval England to live as wizards. Almost everything they've done since then has, in one way or another, blown up in their faces.

So of course they decide to make dragons. It does not go well.

But their biggest challenge may be a young girl who knows that the wizards created the dragons and is determined to make them pay. On her side she has powerful allies, a magical artifact, and a faithful if not particularly helpful dog.

Enjoy a free audiobook + more
Learn more about Membership
List Price: $34.95
You Save: $4.96 (14%)
By completing your purchase, you agree to Audible’s Conditions Of Use
Sold and delivered by Audible, an Amazon company
Share

4.1 out of 5 stars
4.1 out of 5
364 global ratings
How are ratings calculated?
To calculate the overall star rating and percentage breakdown by star, we don’t use a simple average. Instead, our system considers things like how recent a review is and if the reviewer bought the item on Amazon. It also analyzes reviews to verify trustworthiness.

Amazon Customer
2.0 out of 5 stars I feel like this book was written for no more reason than ...
Reviewed in the United States on January 11, 2018
Verified Purchase
I feel like this book was written for no more reason than to satisfy some contractual obligation to a publisher. It felt slapped together and uninspired. Scott Meyer is a much better author than this book would lead one to believe.
Also, I found at least 4 or 5 errors in the book. Some were grammatical (then instead of than), and some were characters names being used incorrectly (i.e. Martin having a conversation with Gary and it's basically "Martin said..., Gary said..., Martin said..." then out of nowhere it throws in a "Jeff said"....Jeff isn't even in the scene. I get it, people are human and nobody is perfect, but these were glaring errors.
In a nutshell, shoddy editing on a book that nobody seemed to care much about in the first place. If you've read the first 3, just leave it at that and spend your $5 somewhere else.
Read more
27 people found this helpful
Helpful
Report abuse

Kindle Customer
3.0 out of 5 stars Definitely a sample before you buy.
Reviewed in the United States on March 24, 2018
Verified Purchase
Definitely not as good as the previous books, probably because there is such a time lapse between books 3 and 4. The characters all feel dumber (and that is saying a lot for this group) and have not only learned nothing but have seemed to regress into even more idiotic forms.

This book could be skipped and nothing would be missed. It feels more like a side story or a filler arc rather than a continuation of the series.
Read more
9 people found this helpful
Helpful
Report abuse

nunyabidniss
3.0 out of 5 stars Meh-gic 2.0
Reviewed in the United States on December 31, 2017
Verified Purchase
Big fan of Magic 2.0. As I've said in at least one previous review it's nothing earth shattering but it (the first one especially) is a FUN read. Mr. Meyer created an interesting world for his characters to play in and for his readers to imagine themselves in. I've read and reread the first three books a couple times now. This latest outing though... is a little.... boring. Without trying to spoil anything, there's no great antagonist here. The quality of the writing is fine and there are some funny moments, but overall it's a bit of a slog because there's nothing really --happening--. It's like the entire plot and action of this book should have been a ten page montage between important events in another book. Or mentioned offhandedly between characters as they're sitting around Phillip's house discussing the funny things they got up to last week.

Nonetheless, if you're a fan of Magic 2.0 then it's tough not to recommend it. Keep expectations reasonable.
Read more
12 people found this helpful
Helpful
Report abuse

Amazon Customer
4.0 out of 5 stars A good read, if not quite as great as others in the Magic 2.0 series
Reviewed in the United States on November 23, 2017
Verified Purchase
It's good to have another installment in this series to read. The banter between the characters and humor is there, and some ridiculous situations as in the previous books. But I'd have to agree with other reviewers that said this isn't quite up to par with the other books in the series. For me, I think this is because the plot just kind of wanders around as the crew tries to accomplish mostly a single task, a task that is kind of dull IMHO. (trying to not give any spoilers) And there are no new wizards, though this would be difficult I guess with the 'list' locked out. This just didn't have quite the "magic" of previous efforts, to use a corny pun.

All that said, while I like the other books in the series a bit better, this isn't a bad read at all, and I enjoyed it. I hope there are more forthcoming in the series.
Read more
4 people found this helpful
Helpful
Report abuse

DJ
2.0 out of 5 stars Not as inspired as the rest
Reviewed in the United States on December 25, 2018
Verified Purchase
Having completely loved books 1-3 I eagerly download this to my Kindle and dug right in. I am sorry to say that this series seems to have played itself out. The book lacks any real tension, and pretty much follows the "Sorcerer's Apprentice" formula of our hapless wizards using power beyond their real understanding or control. Any semblance of character development has been lost, and most of the wizards are pretty interchangeable anymore. The antagonist isn't nearly as compelling as his past villains (she isn't really a villain at all, but kind of determinedly misguided and fanatical). I have loved so many of his past books, I hope the spark uniqueness is recaptured, but I will pay closer attention to the reviews and probably sample from now on before plunking my money down.
Read more
3 people found this helpful
Helpful
Report abuse

Matt Stewart
3.0 out of 5 stars The books are fun to read
Reviewed in the United States on December 11, 2017
Verified Purchase
The books are fun to read, for sure, but as always, I'm torn between the decision to highlight the clear and simple solutions that programmers could easily come up with to solve most of these problems before they get out of hand, and the need for the scenarios to fall apart for plot purposes because the characters are just too lazy to do things properly. I'm not a highly qualified programmer by any means, but there are simple and obvious solutions to some of these problems that people with their skillset should be able to find in a very short time frame.
Read more
3 people found this helpful
Helpful
Report abuse

whoisjohngalt911
1.0 out of 5 stars Not as good as previous books...
Reviewed in the United States on February 16, 2018
Verified Purchase
I read the first book and looked it. There are so many different opportunities in this world to make quality adventures for Martin and Phil. Sad to say, this book did not take advantage of this. Each chapter is just filler. There is no real story line and the main problem could have been avoided by using their powers. The author even made reference to this in the book. I read the first three books and was pretty pleased but this book, sadly, does not live up to the expectations of the first three.
Read more
6 people found this helpful
Helpful
Report abuse
See all reviews

Paul Mercer
3.0 out of 5 stars Not as good as the previous books in the series.
Reviewed in the United Kingdom on February 17, 2019
Verified Purchase
If you liked the previous books in the series then there are a lot of familiar things, same characters, same sense of humour and the same locations. This isn't a bad thing but unfortunately this book is really lacking a decent plot and underlying story to bring the familiar characters to life and give them something useful to do.

Most of the plot is driven by the fact one of the Wizards created dragons as a means for the other wizards to challenge themselves and hone their fighting skills. As to be expected things go awry and the dragons become a problem that needs dealing with. Unfortunately most of the story revolves around the various characters fighting the dragons, it seemed like about 70%+ of the book was just a big dragon fight that wouldn't have warranted more than a couple of chapters (at most) in the previous books.

Still a fairly enjoyable read, just lacking in plot compared to the others and left me feeling a bit "meh" by the end.
Read more
2 people found this helpful
Report abuse

A. G. Williams
3.0 out of 5 stars Worth a read
Reviewed in the United Kingdom on May 17, 2019
Verified Purchase
Don't really know what to say... 2 stars is not bad.. but I'm catching up on the reviews... and to be honest I can't really remember much beyond it broke up a long flight.

It's not to say that I won't buy more books from the author.. but rather I just cannot form a strong opinion.

If you have a long train journey.. definitely buy... it will while away the time while you drink British Rail Hot Chocolate and some bizarre sandwich
Read more
Report abuse

MR David TW Hughes
5.0 out of 5 stars Always a pleasure
Reviewed in the United Kingdom on April 26, 2018
Verified Purchase
As usual, Scott has forged a gun tale of wizards, dragons and social ineptness as only he can. The core story is a simple one that he manages to draw out into a whole book worth of engaging dialogue. Loved it.
Read more
One person found this helpful
Report abuse

Cliente de Amazon
2.0 out of 5 stars Disappointing
Reviewed in the United Kingdom on July 30, 2019
Verified Purchase
Having thoroughly enjoyed the other three books I was looking forward to this.... Which I reckon is a short story made long. Other reviews have touched on the why's. Basically a long conflict with the dragons... Saved by the authors humorous dialogue and not much else. I'm actually surprised the author felt it was ready for publishing and that someone published it, I suspect if the first of the series was of this standard, there wouldn't presently by 5 books. Here's hoping the next one is better.
Read more
Report abuse

Smoke me a kipper
4.0 out of 5 stars Excellent continuation
Reviewed in the United Kingdom on November 13, 2017
Verified Purchase
Excellent continuation of the magic 2.0 series, perhaps not as strong as the predecessors more of the same but that really is no bad thing! A solid entry and a joy to read, numerous chuckles and chortles while reading.

I look forward to book 5!
Read more
One person found this helpful
Report abuse
See all reviews
Back to top
Get to Know Us
Make Money with Us
Amazon Payment Products
Let Us Help You
EnglishChoose a language for shopping. United StatesChoose a country/region for shopping.
© 1996-2022, Amazon.com, Inc. or its affiliates