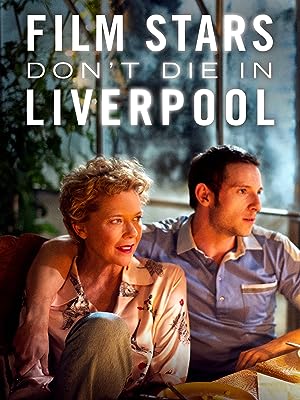 (543)6.71 h 45 min2018R
Hollywood actress Gloria Grahame finds romance and happiness with a younger man, but her life changes forever when she is diagnosed with breast cancer in the 1970s.

Grady HarpReviewed in the United States on May 3, 2018
5.0 out of 5 stars
A Love Story
Verified purchase
One of the most overlooked, exquisitely sensitive films of 2017 somehow slipped past all attention to awards. Based on a true story – published by Peter Turner in 1986 – of a late in life affair between screen icon Gloria Grahame and young actor Peter Turner – this film is radiantly beautiful. The screenplay adaptation is by Matt Greenhalgh and the sensitive direction is the work of Paul McGuigan.

The story covers the years 1979 – 1981. In 1979 Gloria Grahame (Annette Bening) is in England starring on stage in The Glass Menagerie and flirts with young actor Peter Turner (Jamie Bell), a bisexual young actor who falls under the spell of the femme fatale and despite the significant age difference they fall in love and begin and affair that is real, tender, and meaningful to both. As their mismatched romance waxes and wanes over time, events conspire to keep them in each other's lives even when it proves difficult and demanding. Ultimately, they find that they must each come to terms with whatever fate they face in the future whether they are together or apart. Grahame has breast cancer, a fact she conceals from Peter, and as she becomes close to Peter’s family – mother Bella (Julie Walters), father Joe SR (Kenneth Cranham), and brother Joe Jr. (Stephen Graham) – she reveals her illness. On a trip to Los Angeles Gloria and Peter live together in Gloria’s house trailer by the Pacific ocean, and are visited by Gloria’s mother (Vanessa Redgrave) and sister Joy (Frances Barber) before they return to Peter’s home in Liverpool. Gloria grows weaker and ultimately decides to return to her American physician for chemotherapy, escorted by one of her real sons Tim (Tom Brittney) from one of her four marriages, leaving Peter with love and concern that he care for his own family. The story is an affectionate, moving, and wryly humorous memoir of friendship, love, and stardom.

Oscar worthy performances by Bening, Bell, Walters and the entire cast make this film luminous – one that needs to be seen more than once to fully appreciate all the fine qualities – acting, photography, musical score, and direction. Highly recommended. Grady Harp, May 18

DianeReviewed in the United States on June 12, 2018
5.0 out of 5 stars
If you like movies based on a True Story you will LOVE this one!
Verified purchase
I remember her story and was given a totally different perspective on Gloria Grahame. I found myself rooting for her instead of loathing what she had done earlier in her life. The Special Features have a remarkable interview with the real Peter Turner who was fascinating to listen to. Also..the performances of Annette Bening and Jamie Bell are MESMERIZING!
14 people found this helpful
Report abuse

LynneReviewed in the United States on November 18, 2019
5.0 out of 5 stars
outstanding
Verified purchase
Based on their real relationship, this movie about Gloria Grahame and Peter Turner lovingly expresses the many levels of their time together. With a stellar supporting cast to match the flawless and seamless performances of the two leads, one gets the feeling of having shared these pivotal moments in their lives. Bell and Benning seem so true, it is hard to imagine that they are acting....they invite us in to be close witnesses to their very personal story of happiness and pain; they allow us to experience the warmth of the Turner family and their own brief but very touching relationship. Five stars do not do this film justice....how about 10?
4 people found this helpful
Report abuse

Russell SReviewed in the United States on January 24, 2019
5.0 out of 5 stars
the last few years of Gloria Grahame
Verified purchase
For those who have not heard of Gloria Grahame, she was an actress big in the 40's and 50's and some of the 60's. This movie is about her last few years and her love affair with a 28 year old Peter while she was in her late 60's. She had been married 4 times prior to Peter and I will guess she liked them young. This is the story of their affair which ended and then she calls Peter and wants to come to his house with his family and stay for a while only they learn just how sick she is. The cast is wonderful Esp. Mom and then let me say Annette Bening was wonderful but all the credit for this moving movie goes to Jamie Bell. He was magnificent, he truly was. He gave such an exquisite performance that he moved me to tears very easily.
4 people found this helpful
Report abuse

errin spellingReviewed in the United States on April 14, 2021
5.0 out of 5 stars
you never see her 4 children or x husbands
Verified purchase
she was a talented actress , who went to the doctor, when she became ill and appeared to be dumb. it was matter of fact. i didn't get treated for cancer, because i can't lose my hair. no one would hire me. and i have to work. did they not have wigs back then. of course they did. you know , when she tells the doctor this, she is going to die. then the movie, becomes depressing. you feel sad for her boyfriend. he will be alone in the bedroom, crying. but, they make this so very unemotional. they just give you the facts and not the feelings,which would break your heart. he has very nice parents, who try to help him and take care of his girlfriend.toward the end of the movie , you see 1 son, but no idea, why she never visits them.
Report abuse

John PiersonReviewed in the United States on May 22, 2018
5.0 out of 5 stars
Two brilliant performances and a great story
Verified purchase
Incredible performances by Annette Benning and Jamie Bell. Excellent chemistry between the two. Told in flashback and “present day” intermittently, it is emotionaly packed and the dance scene alone is one that runs the gamut and makes you feel the inevitable connection between the two, immediately.
8 people found this helpful
Report abuse

Rita WasleyReviewed in the United States on May 7, 2021
3.0 out of 5 stars
Not Exactly a Love Story
Verified purchase
This was a peek into how a bright star finally burns out and dies. After reading the book, I was happy to see they made a much better story out of it. It's clear that Gloria had many issues and was using the guy during their affair. We don't learn much about her as a person, but she was very enigmatic. It's interesting that she chose to turn to him as a friend when she was at the end of her life; not out of love for him but because she had no one else. Great acting that really brought the book's story to life.
Report abuse

Movies R UsReviewed in the United States on December 31, 2020
3.0 out of 5 stars
FLAWED, TOUCHING STORY OF THE FINAL YEARS OF A FILM ICON
Verified purchase
GREAT CASTING AND SUPPORTIVE MUSIC.
THIS MOVIE IS A MIXED BAG. IT IS A GLIMPSE INTO THE LIVES OF 2
PEOPLE WHO INTERSECT AT THE POINT OF 1 OF THEM AGING AND
SEEKING RELEVANCE.

FLAWED IN THE WAY THE MOVIE WAS CONSTRUCTED {IT SKIPS AROUND
TOO MUCH, THE SEQUENCES ARE DISJOINTED}. GREAT CASTING AND
SUPPORTIVE MUSIC.

GRAHAM HAD A LATE IN LIFE CONNECTION WITH A YOUNGER MAN WHO,
ALONG WITH HIS FAMILY, SHOWED HER GENUINE AFFECTION AND CARING
IN THE FINAL STAGES OF HER LIFE. UNFORTUNATELY SHE DIED AT THE
YOUNG AGE OF 57.

Report abuse
See all reviews
Back to top
Get to Know Us
Make Money with Us
Amazon Payment Products
Let Us Help You
EnglishChoose a language for shopping. United StatesChoose a country/region for shopping.
© 1996-2021, Amazon.com, Inc. or its affiliates