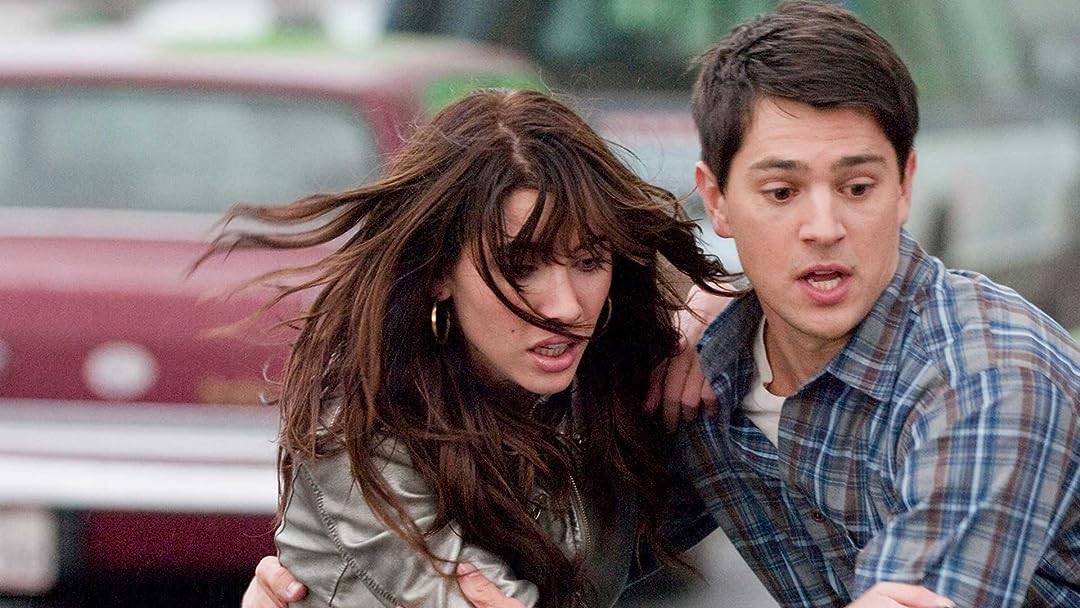 BLACK Disc Only
- No special features
- Seems they are RW/burned copies of the original films. They have generic names/numbers as the title in the DVD rom. You are asked which film you'd like to watch and if you want sub-titles. That's it.

RED Disc Only
- Includes Special Features
- Seems to be the actual Disc (ie menu, etc..); everything looks as it would if you purchased the film on it's own.
- There are A TON of commercials and previews at the beginning

One photo from the first film, so you can see the quality of them; two from the menu of the black discs and one from the red disc.

Brittany DReviewed in the United States on May 18, 2016
5.0 out of 5 stars
Nice Collection
Verified purchase
This set has all five films on separate discs, stacked up in a standard DVD case. It's not too generous with special features, but there are a few. I had a minor problem with the last disc. It was fixed by cleaning so I would hesitate to say it was caused by the packaging, but I will say the packaging is annoying as you try to work your way down through the discs.

As for the films themselves, they all follow a pretty standard formula: Protagonist gets vision, escapes disaster with a few friends in tow, and then he/she and said friends are stalked by Death, who hates to be cheated. While this can get monotonous if you watch them one after another, taken individually it's like watching a puzzle come together. There are some good effects in place, most of the protagonists are likeable, and some creep factor comes from the (mostly) invisible antagonist (Death). The death scenes can be pretty gruesome, but they're rarely drawn out. Tony Todd shows up in three of the five (briefly) to be mysterious and spooky, which is a real plus.

So, overall, this is a good set.
29 people found this helpful

md2965Reviewed in the United States on June 18, 2019
1.0 out of 5 stars
DVDs won't play
Verified purchase
This is a 5 movie, 3 disc set. I bought this for my collection and just put it on the shelf when I got it. I just opened it this past weekend, hoping for a Final Destination binge. I could only watch 1&2. The 3&4 disc wouldn't play and neither would the 5 disc. Neither disc would play in my DVD player, PS4 or my Xbox and I tried them all. Way too late to return wish I had tried them when I got them. Waste of money.
7 people found this helpful

RaelReviewed in the United States on November 22, 2021
4.0 out of 5 stars
The last not always the best saved.
Verified purchase
This final 5th film of the series, had to be purchased seperately, as it was not included on the 4 film Blu-Ray Edition I reviewed prior. Final Destination 5 like it's predecessors, does not fail to give tense jolts in the ways the survivors mishaps occur, the highlight for me being the opening bridge scenerio.

Enjoyed as a whole (all 5), I have to admit the whole excitement for me is a bit lessoned with this final outing. It may be that the Actors are not quite as good as the earlier ones in the series or maybe by 5, it feels more reliance on cheaper shock thrills (bridge scenes excluded) than overall performance, thus less empathy for characters, despite their horrible outcomes.

It's is a good film, don't get me wrong, but I am glad that this one is the finale, I don't know how more creative they can be and best to leave good bodies of work behind than continue on with "played out".

If you have not seen or see this one, it's ok, the other 4 films before, do not leave you in the dark of incompleteness, ALTHOUGH the final scene of this movie totally ties it in with the very 1st film and that was quite a clever twist admitingly.

Amanda S.Reviewed in the United States on February 4, 2019
3.0 out of 5 stars
Good movies bad packaging
Verified purchase
Well I love these movies and my sister had mentioned that she had not seen all of them and I did not have all the single DVD so I decided to get the set. Well when I got it before I even open the shrink wrap it was already rattling inside. They have all of the disks stacked right on top of each other in one DVD spot. There is no separation there’s no nothing there just all stacked on top of each other. This means they don’t normally stay in the hole so they start falling around and shaking. So as a result the first DVD had fallen off in the mail and got scratched. It’s still plays OK but it’s not the best packaging
6 people found this helpful

Sherry🦉Reviewed in the United States on January 12, 2020
3.0 out of 5 stars
😑 😕 😒
Verified purchase
It shows how it all began. I gave ⭐️ ⭐️⭐️ Because none of the movies have a happy end. Everyone always dies. Not one person in all the movies beat deaths game. Death always wins in the end. I guess that’s the the purpose of the story. Still I’m disappointed ☹️ that no one lived.
3 people found this helpful

HuntressReviewed in the United States on October 24, 2021
4.0 out of 5 stars
October Date night pick
Verified purchase
I just opened the “collection” ready to start movie date night as I have never seen The Final Destination movies before. It says discs 2, 4 & 5. On the case it shows details for all five movies. So don’t be alarmed as I originally was. After I opened the box I noticed it doesn’t have it written one the discs that in disc 2 there is movie one and two. Disc 4 has movie three and four. Disc 5 has movie five.
One person found this helpful
See all reviews
Back to top
Get to Know Us
Make Money with Us
Amazon Payment Products
Let Us Help You
EnglishChoose a language for shopping. United StatesChoose a country/region for shopping.
© 1996-2021, Amazon.com, Inc. or its affiliates