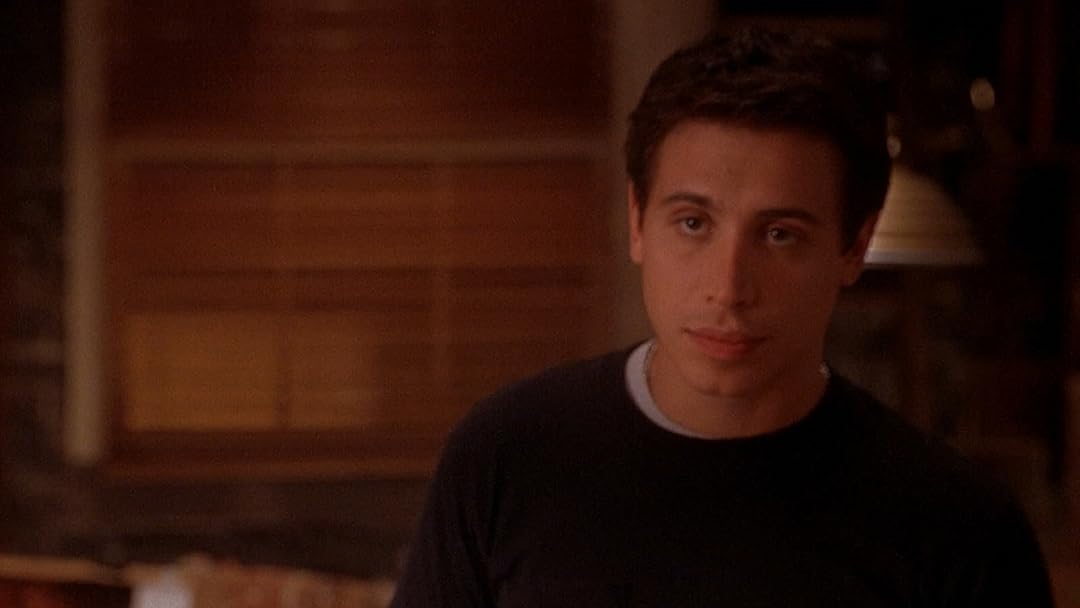 Silver Screen VideosReviewed in the United States on January 30, 2020
3.0 out of 5 stars
An Imperfect, but Worthwhile Find
Verified purchase
When you think of great writer/directors, the name of Jeff Probst probably never comes to mind. Yet, somehow, shortly after Probst began hosting “Survivor,” he wrote and directed a low-budget independent film called “Finder’s Fee.” What is a bit surprising is that, despite a cast of 20-something, at-the-time macho up-and-comers that included Ryan Reynolds, the movie wasn’t another version of “Van Wilder.” (Reynolds actually made this film before his breakthrough in “Van Wilder.”) Instead, it’s an attempt at a serious, albeit twisty, morality tale. Probst tries to juggle too many balls at one time, but, despite several script missteps, “Finder’s Fee” is a decent movie.

“Finder’s Fee” is set at a weekly poker game at which four longtime friends play for unusual stakes. In addition to Reynolds, the other three players are all familiar TV faces, if not names. Top-billed Erik Palladino hosts the game, while steady family man Dash Mihok and loudmouth jerk Matthew Lillard also participate. The gimmick of the game is that each player buys a ticket for that night’s state lottery (with a $6 million jackpot) but doesn’t watch the drawing. Then for the game’s final hand, they put their tickets into the pot with the winner taking all. What the others don’t know is that Palladino found a wallet that had a lottery ticket inside in a gutter earlier that evening. Naturally, that found ticket turns out to be the jackpot winner. Complicating matters is the fact that Palladino left a message for the wallet’s owner (without mentioning the ticket). As soon as the guys start play, James Earl Jones shows up to claim the wallet and then winds up joining the poker game, unaware of just what the night’s big prize will be.

All movies of this nature require a certain suspension of disbelief, but “Finder’s Fee” has one of the most improbable sets of plot coincidences I’ve ever seen. The biggest of those coincidences, and one that is never satisfactorily explained in the script, is just how the other players become aware that there’s a jackpot-winning ticket in the game. Of course, once they do (but never admit it), the film turns into an exploration of the greed and morality of the various players. To strain credibility (and ratchet up the tension) even further, Palladino’s apartment building winds up lockdown shortly after Jones arrives due to a report of an at-large fugitive who might be hiding there. The cop (Robert Forster) in charge of the manhunt calls on the players several times before the film is over.

Doubtless, Jeff Probst could have made a simpler, more straightforward movie than “Finder’s Fee,” either as a comedy or a thriller. But he chose an extremely complex storyline and then imposed additional restrictions on his story. The movie takes place almost entirely inside Palladino’s apartment (which seems to have only one large room), and it takes place in real-time, so that everything from finding the wallet to the movie’s surprise ending transpires in 100 minutes or so. That use of real-time framing isn’t just a gimmick. It actually boosts tension in the film and makes some of the more haphazard character actions more credible (when you’re in a hurry, you sometimes cut corners and make mistakes). Although I had a hard time buying a couple of the characters, especially Lillard (who seems like the sort of jerk no one would want at their poker game), I bought into the story.

“Finder’s Fee” does boast a solid cast, but what really sells the film is James Earl Jones. He slips effortlessly into this role with a folksy demeanor and ability to manufacture sympathy for himself at the drop of a hat, making viewers wonder just how on-the-level he actually is. Also, any time that Robert Forster has a couple of opportunities to chew some scenery, the result is a better movie.

I appreciate filmmakers who take chances, and Probst was really flexing his creative muscles here, with the result being a very ambitious movie. “Finder’s Fee” doesn’t always work, and the scenes that don’t work can be somewhat awkward to watch. Yet, overall, I was entertained and, more importantly, I stayed interested in seeing just how the film would play out. For those interested in somewhat of a change of pace to pass the time on a stay-at-home Saturday night, “Finder’s Fee” is a good find.

SusanneReviewed in the United States on May 30, 2016
4.0 out of 5 stars
3.5 stars
Verified purchase
This movie is more like a play, only it wouldn't work on the stage because of the need for close-ups of details (injuries, cards). The dialogue is a bit chatty--maybe too realistic to be interesting the whole time, but I'm sure that's how stressed-out, hyper young guys act on boys' night. Pretty good acting. No sex, very little cursing, minor violence, and a whole lot of ethical dilemma. Fun "OMG!" twist at the end. If you like less action and more philosophy, this is a movie for you. Could some things be improved? Sure, but that doesn't make it not worthwhile as it is. I'd be interested to see what other story ideas Probst has. Oh, and I thought some of his camera shots and other directorial decisions were interesting.

***VAGUE SPOILER: People are knocking this movie because they say "The ending isn't possible," when in fact it is. The film was made in 2001. Many people were still using answering machines instead of voicemail. (Cell phones were just starting to become mainstream.) The main character leaves a detailed message. It is quite possible that the person with that phone number does not live alone.***
11 people found this helpful

Do GoodReviewed in the United States on June 22, 2016
4.0 out of 5 stars
Don't always believe what you're told
Verified purchase
One of those rare, low-budget, unknown films that is not a "Hollywood blockbuster" but deserves your attention. "Finder's Fee" reminds me of "Reservoir Dogs" with 90% less gore/blood but with a moral behind the story. Like everybody who actually sat through this entire, drawn-out film said, the ending was quite surprising and unexpected. The question is, is it possible? Yes, like an astute reviewer noted and without giving away the ending of this film, it is possible that James Earl Jones' character lives with the brother-in-law. I must admit, Jeff Probst does a good job going back and forth between who is supposedly right and wrong as well as what are the right moral actions. However, using Logic 101 here, wouldn't it make sense to ask for the photo ID of Avery Phillips when the main character first meets him? Anybody can say they are Avery Phillips but unless you have proof (what judges always want), then how can you tell? Are you Avery Phillips?
One person found this helpful

PeachyPatReviewed in the United States on April 20, 2018
5.0 out of 5 stars
What do you do when you hit it lucky?
Verified purchase
I loved this movie. All the actors were great because they had wonderful characters to portray. A very interesting scenario with many complications along the way, I'm a sucker for "what would I do in this situation.' This movie really puts you to the test. Each one of the characters has to make choices and a simple get together for a card game turns very dramatic very quickly. There will be long term consequences for the friends as a group and individually.

This would be a great movie to watch with some friends and see if you can figure out the ending as it goes along.
3 people found this helpful

LauraReviewed in the United States on April 19, 2018
5.0 out of 5 stars
Worth staying up to watch
Verified purchase
Ending shocked me and left me laughing. Actually, I was shocked once before that. I had been wondering why guys who didn't have any reason to be nervous were acting shifty. Beyond that, it reminded me of Who's Afraid of Virginia Wolfe - drunk people, sitting around talking (these guys were playing cards), uninhibited and a tiny bit grueling. A character study, maybe.

It was a good cast - actors I like. The plot got out of kilter for lack of a smooth way to bring police into the apartment. I don't really understand the purpose for police. I enjoyed it anyway.
3 people found this helpful

Ryan HutchisonReviewed in the United States on November 27, 2020
4.0 out of 5 stars
So much better than I expected
Verified purchase
I thought this was going to be a low budget indie flick starring a bunch of actors I love from before they were stars. I didn't expect much, but figured it was worth a watch. I'm SO happy I watched it. Ryan Reynolds and Matthew Lillard (and the rest of the cast) were superb. The writing was good, and the story was intense.

It was in fact a lower budget indie flick, and it is filmed on a single set - almost like a stage play, and absolutely worth the watch.

John W. SpaldingReviewed in the United States on May 30, 2016
5.0 out of 5 stars
Excellent performances by an old pro and all the rest of an excellent cast
Verified purchase
The critics all complained that this was too confined by the conventions of the theatre - a one-act one set continuous run of time without cinematic flourishes. So what! It's got James Earl Jones in a delightful performance and Ryan Reynolds and 4 other Canadian hunks (filmed in Vancouver even though it takes place in NYC). With no cars to crash around corners in, the boys have to display acting chops, and they don't disappoint. The thing is mildly reminiscent of Odd Couple, but better. There's a severe moral crisis at the heart of the drama, and the young host of the poker game is as compassionate and honest as he is good looking. His girlfriend has a neat scene played via the apartment entrance intercom, and there's an ironic BIG twist at the end that the critics hated, but it makes it all worthwhile. Absolutely no regrets spending time with this.
3 people found this helpful

Victoria J. DennisonReviewed in the United States on June 16, 2016
5.0 out of 5 stars
Finder's Fee
Verified purchase
This is an excellent film. Extremely good acting all the way around. This movie is a taunt psychological low key thriller.There is a twist at the end, but it was not as dire as I had imagined. James Earl Jones usually is cast as a strong character and I really expected a more horrific ending. Anyway, I gave it five stars for its quality...This isn't a slash and gash movie, it's a moral movie really, about strength of character. Rather boring to some, I would imagine.
4 people found this helpful
See all reviews
Back to top
Get to Know Us
Make Money with Us
Amazon Payment Products
Let Us Help You
EnglishChoose a language for shopping. United StatesChoose a country/region for shopping.
© 1996-2022, Amazon.com, Inc. or its affiliates