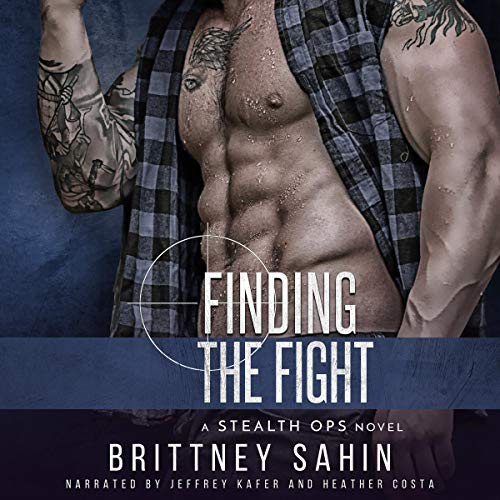 Their well-kept secrets are about to unravel.

Former CIA officer Jessica Scott and Navy SEAL Asher Hayes have worked together for years as part of a black-ops team for the president, but Jessica's close encounter with death is about to change everything between them....

As the team hunts down her abductor and tries to prevent an impending attack, Asher will stop at nothing to protect the woman he cares about. But will his actions push Jessica, aka the Ice Queen, further away; or will he knock down her impenetrable walls?

With their pasts coming back to haunt them, and their insatiable desire for one another pushing them to the brink, Asher and Jessica will find themselves faced with impossible choices--ones that could topple their very world.

In this high-stakes mission, will they be able to find the fight inside of them to win - or will this be one mission that hits far too close to home?

The Stealth Ops Team - Navy SEALS who handle covert ops for the president in the US and around the world - under the guise of an alias, Scott & Scott Securities.

Each book in this action-packed romantic suspense series can be listened to as a standalone and begins with the recruitment process for that particular SEAL.

Your audiobook is waiting!
Learn more about membership
List Price: $17.35
You Save: $3.36 (19%)
By completing your purchase, you agree to Audible’s Conditions Of Use
Sold and delivered by Audible, an Amazon company

Janice Stansell
5.0 out of 5 stars One of the best series
Reviewed in the United States 🇺🇸 on December 31, 2022
Verified Purchase
This is one of the best series, love all the stealth ops stories. Jessica sure was a tough cookie, good thing Asher has the stamina to keep up, in more ways than one! There are always bumps and hurdles to get over and through in each of these stories. And the steam never disappoints!
Read more
Helpful
Report abuse

Carla McDaniel
4.0 out of 5 stars Finding the Fight
Reviewed in the United States 🇺🇸 on December 6, 2022
Verified Purchase
Glad these two finally stopped fighting the sexual tension between them. Loving this series. Love everything about it from the mystery, action, and of course the HEA.
Read more
Helpful
Report abuse

MacNana
4.0 out of 5 stars Well Done
Reviewed in the United States 🇺🇸 on November 22, 2022
Verified Purchase
This is a rather realistic novel of romance and suspense. Stealthy agents dedicated to the cause of freedom is always a well played plot.
Read more
Helpful
Report abuse

nancy e smith
5.0 out of 5 stars Love overcomes all
Reviewed in the United States 🇺🇸 on October 24, 2022
Verified Purchase
Having read several of the other books in this series, I was not surprised with the story format. However, this story had a bit of a twist with both characters having such a history. The strength and vulnerability in Jessica was touching. Another good read
Read more
Helpful
Report abuse

Kindle Customer
4.0 out of 5 stars Finding the Fight...
Reviewed in the United States 🇺🇸 on May 11, 2022
Verified Purchase
Stealth Ops book 3. A really fascinating read. Asher and Jessica have history or a one night stand awhile back. So now that they are on the same team, they circle each other with some crazy chemistry connection. Neither wants to step forward but neither can stay away. Jessica gets kidnapped and tortured. The team rescues her. Asher helps her through her PTSD. And when his sister and life gets messy, Jessica helps him to grieve. The both at some part in the book must find the guts to fight for each other, their love, and the will to move on. This book is sexy, angsty, dramatic and gut wrenching .
Read more
One person found this helpful
Helpful
Report abuse

Di
5.0 out of 5 stars OH MAN !!!!
Reviewed in the United States 🇺🇸 on February 21, 2019
Verified Purchase
Oh man..holy smokes...this author does it again, delivering another read that I could not put down. The story of Jessica and Asher, who have a history and work togther, sparks flying off of them at every turn and both denying what they both want. Jesica has been trained to not let emotions get the best of her, keeping everything deep deep down, making her seem like an ultimate ice queen but she does feel and has helped others w/o anyone else knowing. That gets her in trouble when her past catches up with her, and has her team scrambling to find and save her.
Asher knows about the op that landed her in trouble and sends shock waves when he admits that yes, they have worked togther in the past but doesn’t let on that they have shared more than an op. He is struggling as well, his past catching up to him when his sister does something that shocks him and he goes back to his old ways to cope with what happened to Jessica and everything else that is spiraling out of control in his life. It’s one thing after another...can’t they catch a break?
WOW WOW WOW WOW what a read that had me on the edge of my seat and biting my nails while flipping the pages to see how it all ends. A read filled with suspense and action, lust/love, and amazing, did I state, AMAZING characters. The story flowed beautifully and the descriptions were spot on, making me feel like I was right there with them. The intensity and attraction between these two was hot hot hot hot, melt an iceberg hot and what I LOVED, did I mention LOVED, Asher was not a man wh*** and only had eyes for Jessica.
I have read all of this author’s books and each read keeps getting better and better, just when I think she can’t top the last book, BAM, she does it again. I can’t wait to see what comes next !!!!!
Read more
8 people found this helpful
Helpful
Report abuse

Toni Walker
4.0 out of 5 stars Romantic Suspense at its best!
Reviewed in the United States 🇺🇸 on August 2, 2019
Verified Purchase
4.5 Stars

This is the third book in the Stealth Ops series. I skipped over the book about Owen to read this one. I am sure I will get to that book soon but I was intrigued by Jessica and Asher. I kept picturing Jessica as a version of Jennifer Garner from Alias but then later realized the Alias lady would be another character named Emily. I am sure I will pick up her and Liam’s book after this one. Alias is one of my all time favorite series. Is it any wonder I am intrigued by this?

Sahin has the unique ability to get us into the mind set of both male and female lead. Sometimes that is hard to do if you are reading a series one book after another. The characters are very relatable. You get comfortable in their skin. You worry for them. You care about what they care about. You root for them. That is not a quality I see in all books of this type. I am invested in knowing what is going on with all the members of #BravoTeam but each new story drags me further into the drama. I liked learning the backstory of Jessica and Asher. They had both been struggling with the attraction for six long years. But when Luke went off on maternity leave it pushed Jessica and Asher to work more closely together.

This is not a story about people without issues. They have TONS of issues, each of them. How can they not doing what they do for a living. But they have learned to compartmentalize. Well, Jessica did. Asher’s way of coping was to either beat the crap out of someone or let them beat the crap out of him.

This entire series just intrigues me and make me want more. I am glad I have two more books in the #BravoTeam series. And I look forward to the #EchoTeam books when they come out.

Kindle Customer
5.0 out of 5 stars Read me please
Reviewed in the United Kingdom 🇬🇧 on March 9, 2022
Verified Purchase
When your trying to look forward in life sometimes the past comes back to haunt you. While trying to come to terms with the past and correct some of those mistakes to save lives, can Asher and Jessica learn to forgive so they can have a future together.

I've said it before, and I know I'll say it again, but Brittney has written another must read.
Read more
Report abuse

Karen Bee
5.0 out of 5 stars Good Mix of Action and Back Story
Reviewed in the United Kingdom 🇬🇧 on January 27, 2022
Verified Purchase
Jessica and Asher's story has been bubbling under the surface throughout the series and it was great to get to the reveal. I enjoyed the action and the more introspective elements of this story. The characters were well rounded and Jessica was tough, but with heart underneath, making her a great female lead character.
Read more
Report abuse

Doubledoodles
5.0 out of 5 stars Fabulous
Reviewed in the United Kingdom 🇬🇧 on February 21, 2019
Verified Purchase
Book 3 in the series, so read this with some high expectations r actions set by the first two books, was I disappointed - hell no! Incredible story of Asher and Jessica their feelings for each other which they tried really hard to fight, how their story highs and lows builds to so much tension of both the sexual and situation kind that the pages sizzle. Fab-u-lous, amazing, emotional and tantalising, a must read.
Read more
Report abuse

Angela Bailey
5.0 out of 5 stars Best one yet!
Reviewed in the United Kingdom 🇬🇧 on February 21, 2019
Verified Purchase
Having only just discovered Brittney as an author I'm playing catch up on her books. I started with the Stealth Ops series and I haven't been disappointed yet. Each book builds on the last so you never leave your favourite behind.

Asher and Jessica are my favourite to date. There's so much will they won't they, and a bindle full of tension to go along with it. I got so wrapped uo in the story and the characters that I feel like I know them and I was shouting advice to them, much to my husband's displeasure (he was trying to watch football) but it all worked out in the end. I've got withdrawl symptoms already and have to wait for the next book.

Thanks Brittney for an amazing read!!!
Read more
Report abuse

Dreamer2207
3.0 out of 5 stars Very much enjoyed
Reviewed in the United Kingdom 🇬🇧 on March 29, 2019
Verified Purchase
Did enjoy this book. There was the right amount of action, sexual tension and intimacy.
I did feel though that toward the end once all the drama with Samir was over that the rest was just a filler to the end. That’s the only negative I have.
Read more
Report abuse
See all reviews