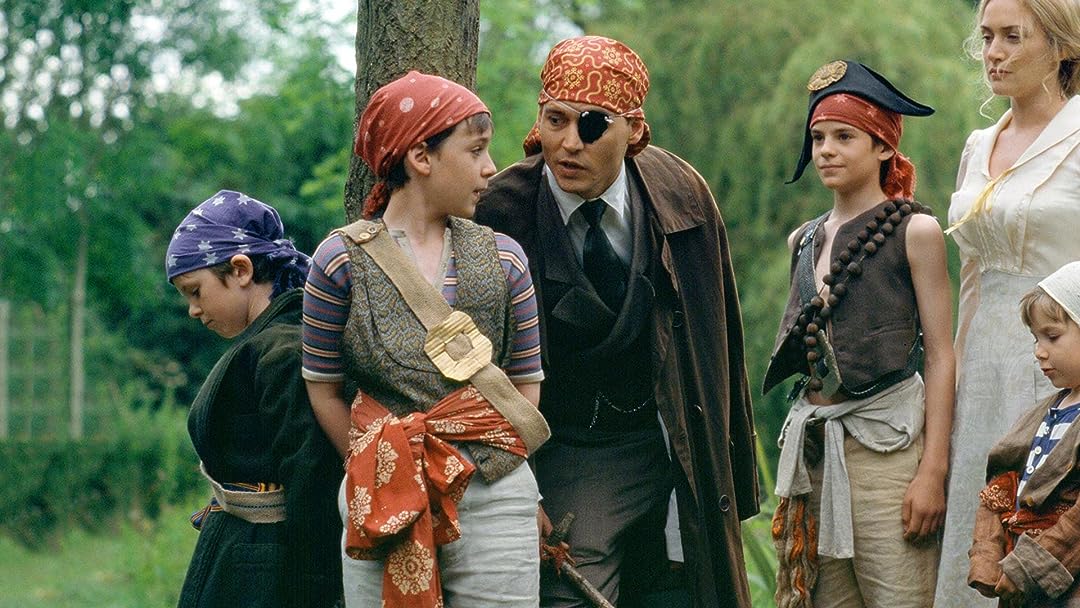 (3,628)
7.71 h 41 min2004X-RayPG
Award winners Johnny Depp (PIRATES OF THE CARIBBEAN: THE CURSE OF THE BLACK PEARL), Kate Winslet (ETERNAL SUNSHINE OF THE SPOTLESS MIND), Dustin Hoffman, and Julie Christie (TROY, HAMLET) star in this magical tale about one of the world's greatest storytellers and the people who inspired his masterwork Peter Pan.

PJCDarkLink92Reviewed in the United States on January 3, 2019
3.0 out of 5 stars
Good for a kids movie, but...
Verified purchase
The true story was much darker than this. And since the movie was only about how he thought of Peter Pan, they made it like that's all wrote. It wasn't really that accurate from a true story documentary stand point. A lot of his life story was censored and simplified for children's appeal. In his actual life story wrote about a baby named flying called "The Little White Bird" sometime before "Peter Pan". This movie skipped and cut out that book and had him write Peter Pan much sooner in his life then he actually did in real life. The movie basically had him write Peter Pan even before when he was supposed to be write The Little White Bird.

Also, in real life, JM Barrie's favorite Davies child was Michael not Peter. But because the focus of the movie was on how he made Peter Pan, the writers made Peter be his favorite, when that's not how it was in real life.

Anyways, that's about all I can say about this movie. There's more I want to say, but I don't know how it say such without drawing up controversy. It's good for kids, but not for anything historical as it's not even accurate to the true story (25% at most maybe, but no more than that). That's all.

N. RobertsReviewed in the United States on September 19, 2016
5.0 out of 5 stars
The story behind Peter Pan
Verified purchase
This movie captured my interest from the first. Johnny Deep excels at playing complex characters. The wife had a difficult role and played it well. Kate Winslet is always a pleasure to watch and Julie Christie was a surprise as her mother. She made her role believable. The children were adorable as only good children can be.

It was a glimpse into a world that is now gone. It also shows how the creative mind takes bits and pieces of experiences and turns it into something as enchanting and unique as Peter Pan. The inspiration to bring in 25 orphans and scatter them in the audience was sheer genius.

This is a lovely movie. I will watch it again to pick up nuances I missed the first time.

CustomerReviewed in the United States on June 8, 2017
5.0 out of 5 stars
Enjoyable when it came out and enjoyable still!
Verified purchase
Enjoyable when it came out and enjoyable still! I really liked all the actors, and everyone seemed very realistic to me. Dustin Hoffman's small role was hilarious. Johnny Depp and Kate Winslet are always amazing. Everyone did a fantastic job, and I loved this movie. As for characters, real life people though they may be, I didn't like his wife, at least not how she was depicted in this film. She was not only selfish, but extra terrible to try and act like her actions were justified! He wasn't perfect, but that does not warrant another to do something wrong. Anyway, I think if you love Peter Pan, or simply would like to know a small history about the writer/playwright behind the story, then I recommend this one wholeheartedly.
3 people found this helpful

Kindle CustomerReviewed in the United States on May 19, 2019
5.0 out of 5 stars
Finest movie Depp ever made.
Verified purchase
This is a shining example of what can be done in the telling of a story. It is a story of the writing, by J. M. Barrie, of Peter Pan. We see the external causes - the people and the situations and the events - that shape the timeless of story of the boy who never grew up. And we share the growth, the thought, and the feelings of those directly involved. Add to the story and the excellent acting (watch the little boy, Peter, especially - formidable in one so very young), the most touching and serene musical score. Be prepared to be lifted out of this world into one not so long ago. And be ready to find Neverland.
One person found this helpful

cheryl fitchReviewed in the United States on July 18, 2015
5.0 out of 5 stars
" is one of my favorite movie lines
Verified purchase
"Dying issn awfully big adventure!" is one of my favorite movie lines. This movie has an unexpected death of the mother,Kate Winslet,r of four boys so the grief is lightened when she goes to lighthearted Neverland,a place that Sir James Barrie played by Johnny Depp,wrote in his Peter Pan strory about the" lo,st boys. This famous story incorporated Mr.Barrie's observance of the Davies Family during the time he spent with them during the time before Syliva Luellen Davies died of lung cancer and the learning adventures they had together. Mr. Barrie wife left him as a result of daily time spent with the boys" & their mother,the so called muse. Julie Christy played the part of the boys grandmother & played an important part of needing to help the Davies family survive thru the confusing time of wanting to help her daughter's family after the recent death of the boy's father. This movie filled in many unknown facts about the famous story of Peter Pan!
3 people found this helpful

Purple VioletsReviewed in the United States on August 20, 2016
4.0 out of 5 stars
Finding Neverland
Verified purchase
The movie tells the story behind the idea and creative birth pangs of Neverland as it was developed into the hit play "Peter Pan." I was expecting a light-hearted movie, but this movie involves emotional heartache, betrayal and struggle; as well as discovering love, finding inspiration, and never giving up. As an actor, Johnny Depp knows how to portray his character to the fullest, and he did it again in this movie. Not a fast-paced movie, yet it was a good movie that kept my interest right to the end!
7 people found this helpful

ferdReviewed in the United States on March 18, 2015
5.0 out of 5 stars
This older child loved it
Verified purchase
This was a modified telling of the true story of Sir James Matthew Barrie, author of Peter Pan and other works. The historical facts were changed ad rearranged but the spirit of the story was true. I found it fascinating that a man who should have grown up very flawed, considering his childhood being raised by a severely depressed mother, turned out so well. He was very child-like in his approach to life but went on to create lasting stories and left a great legacy in an adult world. The players in this movie were all first rate and the story engaging. The message - If we should only "believe". Great for children who want to believe in fairies and a fairy world and adults who seek and find Something or Someone greater to believe in.
4 people found this helpful

Patricia H. ParkerReviewed in the United States on January 14, 2006
5.0 out of 5 stars
This is a lovely film
Verified purchase
Some here have spoken against Johnny Depp, and how some of the facts in the film were wrong. I am a long time fan of both Depp and "Peter Pan". Also, the characters are real, and the play is real and the story is, in the majority, true. I'm not sure which facts the other reviewer thinks were fudged. However, the play, Peter Pan, is wonderful. Although I knew that the inspiration for Peter Pan was a "real boy", I didn't know he was one of the talented DuMaurier family. Besides showing the story of how Peter Pan was written, the film gives a quick history lesson on the life of women at the turn of the 20th century. Kate Winslett's character is left penniless with four young boys to raise. Still she resists the demands of the mother, who helps support her family, by allowing James Barrie to become part of their circle. She realizes that he will contribute the male presence that her children need. She also sees that her grieving children seem happier when they are with Barrie. Barrie has his own problems with a career which started with a blaze of glory, a recent play which flopped and a wife who is more interested in the reflected glory she thought he would give her than trying to understand her husband. The quixotic Depp, as the Scots playwright, includes the sparkle that he has shown in such films as "Chocolat" and "Pirates". You may not like him, but you have to allow that he is extremely talented. Dustin Hoffman is his usual wonderful self as the theatre producer who doesn't understand the new play, but goes along with it on the strength of Barrie's past inate theatre sense, as exasperating as it is. Julie Christie, aging with grace and beauty, also gives a marvelous performance as Winslett's mother. The boys are wonderful, and let's not forget Kelly MacDonald in her cameo role as "Peter Pan". She makes me wish that she would become involved in a real stage production of Peter Pan and take her place alongside such as Maude Adams and Mary Martin in the pantheon of actresses who have played the boy who would not grow up.

I can't find anything not to like about this film. It is a true story about the writing of a fantasy. If you don't believe in fairy tales or fairies, simply don't clap when asked to and go find something more realistic to watch.
3 people found this helpful
See all reviews
Back to top
Get to Know Us
Make Money with Us
Amazon Payment Products
Let Us Help You
EnglishChoose a language for shopping. United StatesChoose a country/region for shopping.
© 1996-2022, Amazon.com, Inc. or its affiliates