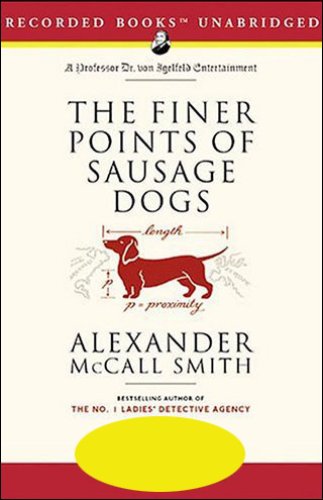 The Finer Points of Sausage Dogs

Alexander McCall Smith (Author), Paul Hecht (Narrator), Recorded Books (Publisher) & 0 more
4.3 out of 5 stars 240 ratings
See all formats and editions
Sorry, there was a problem loading this page. Try again.
With millions of copies of his New York Times best-selling No. 1 Ladies' Detective Agency mysteries in print across the globe, Alexander McCall Smith is one of the most popular novelists and humorists in the world. Starring the brilliant but bumbling Professor Doctor Moritz-Maria von Igelfeld, The Finer Points of Sausage Dogs is a wonderfully entertaining showcase for Smith's award-winning wit.

Invited to lecture in America, von Igelfeld envisions a visit to California or New York. Instead, he finds himself at the University of Arkansas. Still, in von Igelfeld's view, one American state is very like another. An expert philologist, von Igelfeld prepares to deliver a talk on verbs, until he makes a grim discovery: he has been mistaken for a German master of veterinary science who has recently passed away. One man at the reception is quick to point this out. But von Igelfeld explains that since Germans are so efficient, they sometimes publish obituaries before a person's demise. Before long, he takes the podium and faces an attentive crowd expecting to hear some fine points on the nature of sausage dogs.

Your audiobook is waiting!
Learn more about Membership
List Price: $16.09
You Save: $1.14 (7%)
By completing your purchase, you agree to Audible’s Conditions Of Use
Sold and delivered by Audible, an Amazon company

Avid Reader
5.0 out of 5 stars Clueless professor stumbling his way through life
Reviewed in the United States on January 17, 2013
Verified Purchase
I have not read the other books in this series. I purchased this one first as it got the best reviews from Amazon readers. I loved this absurd take on a clueless, selfcentered German academic who bumbles his way from the southern U.S., to Italy and a Mediterranean cruise, This is absurd satire at its best and reminded me a great deal of Nikolai Gogol's short story "The Nose."

It's nothing like Alexander McCall Smith's Corduroy Mansions and Isabel Dalhousie series (I haven't yet read the No. 1 Ladies Detective and 44 Scotland St. Series). His other works can sport dry humor and irony, but this series is off the Richter scale when it comes to dry humor and absurd coincidence.. I loved it and had to share the stories. I have more than a dozen other AMSmith books on my bookshelf to read from his other series that I've collected over the past year, but I will eventually be looking for the other volumes in this series because the doctor and his colleagues, no matter the predictability of their relationship, are great reading.
Read more
9 people found this helpful
Helpful
Report abuse

Jon Linden
4.0 out of 5 stars Academia Meets Life!
Reviewed in the United States on January 30, 2005
Verified Purchase
In his most recent book, Alexander McCall Smith reveals some of the intrinsic characteristics of collegiate academic life. He highlights the pomposity, arrogance and constant quest for self-recognition that characterizes the avocation. With tremendous aplomb, McCall Smith relates the misadventures of Herr Professor Dr. Moritz-Maria von Igelfeld, a professor of "Romance Philology." His great work of academic achievement in his lifetime is a respected book called "Portuguese Irregular Verbs."

While his specialty and achievement are surely somewhat esoteric and of interest mostly to academicians, rather than regular people, the book presents multiple situations in which Dr. von Igelfeld presents his specialty to regular people. As per the title of the book; the good `Doktor' presents a lecture on "Sausage Dogs" or as we know them better, "Dachshunds," in an attempt to get American recognition. Interestingly, he thought he was to speak on "Portuguese Irregular Verbs" but with a little last minute adjustment, the Professor does in fact give a lecture on "Sausage Dogs."

In the book, it is the interrelation of this "Ivory Tower" mindset and the more mundane mindset of people outside this environment that McCall Smith concentrates on illustrating. He keenly shows the reader the almost `back-biting' environment internal to academic life, and then, more specifically and graphically, shows us the way in which one of these academics relates, or fails to relate, to normal people in a world outside of academia. As can be expected, this combination results in some extremely amusing outcomes.

Smith is in good form in this book, although it is not one of his best. Nonetheless, devotees of the Alexander McCall Smith multiple scenarios and other works, will find this book quite in line with the McCall Smith they have grown to know and love.
Read more
14 people found this helpful
Helpful
Report abuse

Wolf Finkbeiner
5.0 out of 5 stars Witty, Dark humor, superbly done!
Reviewed in the United States on December 21, 2005
Verified Purchase
Very, very few books make me laugh out loud. This book did. Professor von Igelfield is a great character who isn't above misrepresenting himself in tight situations.

Through one such situation he ends up operating on a colleague's Dachsund sausage dog. Tragically, through a series of errors, three of the poor dog's legs end up amputated: "An elaborate harness was secured round the dog's body and attached to this were three small wheels. By using its remaining leg as a paddle, the dog could propel itself on its wheels and get anywhere it wished to get. Only very occasionally did the system not work, as had happened once or twice on a hill, when the dog had got out of control and careered down the pavement on its tiny wheels, unable to stop itself, and had ended up on a lawn or in a bush." Thus a feud starts between Dr. von Igelfield and his colleague over the unfortunate state of the dog. A great and fun book that I highly recommend.
Read more
6 people found this helpful
Helpful
Report abuse

Judith A. Lemmon
4.0 out of 5 stars Professor Dr. Moritz-Maria von Igelfeld world is insane and funny.
Reviewed in the United States on November 22, 2019
Verified Purchase
I love Alexander McCall Smith's books and the professor in this book does not disappoint the reader. He ends up operating on a friend's dachshund without a license and he goes on a cruise to lecture, is put in a cramped cabin and nobody comes to his lecture. Dr. Igelfeld and his friends, Professor Dr.Dr. Florianus Prinzel and Dr. Underholzer are always getting themselves in predicaments as they follow their life's work at the Institute of Romance Philology. I look forward to reading "At the Villa of Reduced Circumstances."
Read more
One person found this helpful
Helpful
Report abuse

John A. Buehrens
1.0 out of 5 stars Dog Crap
Reviewed in the United States on June 8, 2021
Verified Purchase
This is dog crap. AMS has a well-deserved rep for characterization, humor and humanity. But he has now turned into a sausage factory with no quality control. He, his editor, and his publisher should be ashamed.
Read more
Helpful
Report abuse

Barbara
5.0 out of 5 stars Another recommendable McCall Smith novel
Reviewed in the United States on May 30, 2013
Verified Purchase
I have never read an Alexander McCall novel I did not like, and this book of his is no exception. It is entertaining, even funny, and well written. Having been born German I enjoyed the references to German character and quirks. The effect it had on me is that I will continue to purchase more McCall Smith novels. This novel is not a suspenseful adventure type novel, but I was not looking for that. As always the author proves to be good in developing a story and providing us with an interesting protagonist.
Read more
2 people found this helpful
Helpful
Report abuse
See all reviews

Bonny Scot
5.0 out of 5 stars especially the wonderful names, he gives his characters
Reviewed in the United Kingdom on August 28, 2016
Verified Purchase
This novel was McCall Smith at his most whimsical. It is delightful to read,,especially the wonderful names,he gives his characters. I have really enjoyed all of the books that I have read of his prodigious output
Read more
Report abuse

Babs
5.0 out of 5 stars An excellent read
Reviewed in the United Kingdom on January 28, 2016
Verified Purchase
Another excellent story from Alexander McCall Smith about Moritz-Maria con Igelfeld, one of three.
Read more
Report abuse

Cheryl Barrow
3.0 out of 5 stars Misleading
Reviewed in the United Kingdom on August 31, 2019
Verified Purchase
Not what I was expecting
Read more
Report abuse