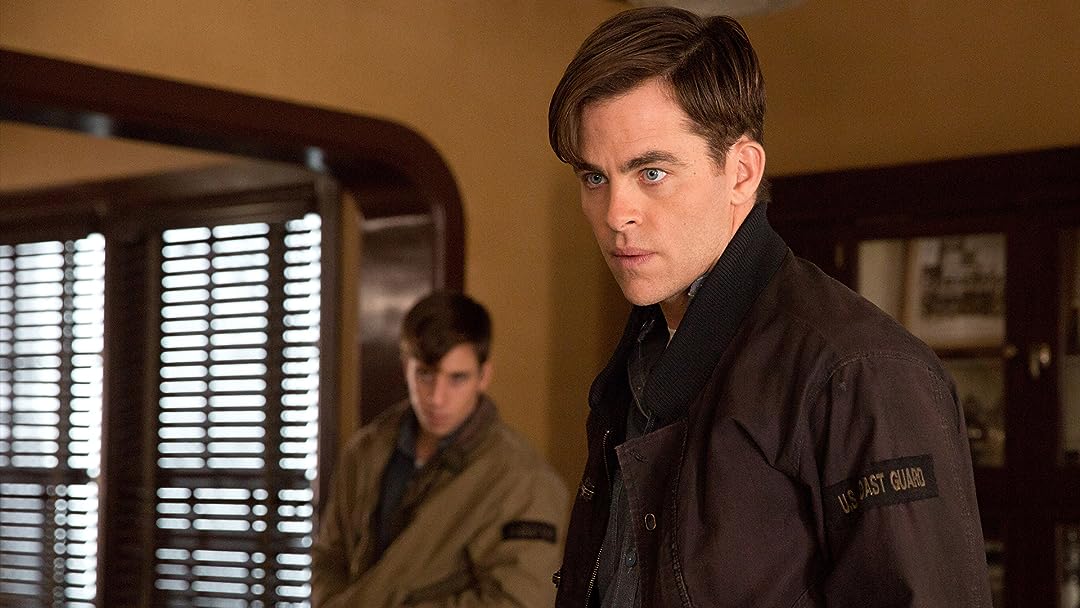 (4,674)
6.81 h 57 min2016X-RayPG-13
When a massive winter storm traps more than 30 sailors on a fast-sinking ship, four U.S. Coast Guard members set out to rescue them in a 12-seat boat, braving 60-foot waves and hurricane-force winds, in a heroic action-thriller based on a true story.

Max CReviewed in the United States on May 28, 2016
5.0 out of 5 stars
That Others May Live
Verified purchase
I served in the US Coast Guard; and my last year was at two Surf Rescue Stations. We had newer and better boats than the old 36's. But I saw worse weather than in the movie. I don't remember being afraid; but this movie reminded me how terrifying surf rescue is. The uniforms were not perfect. The correct phraseology and terminology were not always used. I presume that is to make the movie understandable to those that didn't serve in the CG. But the dedication and courage required to risk dyeing so "That Others May Live" was well portrayed. Thank you Disney, for telling our story. Now I'd like them to make a movie about Douglas Monroe. Semper Paratus!
117 people found this helpful

Stone DogReviewed in the United States on April 27, 2017
4.0 out of 5 stars
Man versus nature.
Verified purchase
At last! An action/adventure film without a single gunshot! Not that I have anything against a good shoot-em-up, but a man vs. nature tale is just what the doctor ordered.

This is the story of Coast Guardsmen at their best, risking their own lives to save others. The story takes place in the winter of 1952 when two aging WWII tankers break in half off the Massachusetts coast in a storm. The story focuses on the rescue of the SS Pendleton in which a small boat must brave towering waves and gale-force winds just to get to the stricken tanker...or, rather, the aft part of the ship since it broke in half and the bow section sank.

There are two related stories in this film. The first is the Coast Guard crew of Bernard C. Webber, Andrew J. Fitzgerald, Richard P. Livese and Ervin E. Mask. These men must risk everything just to get over the bar, a task likely to get them killed even before the rescue even begins. The second story is of the crew of the Pendleton who must overcome their disunity to keep the aft section of the ship afloat long enough for help to reach them.

It's an engrossing film...once it gets moving. The reason it lost a star with me is the rather clumsy romance between Chris Pine and Holliday Grainger which is the focus of the first 15 minutes of the film. None the less, the rest of the film is worth it.

A great action/adventure film and definitely worth four stars.

Robert I. HedgesReviewed in the United States on September 11, 2016
5.0 out of 5 stars
The Finest Traditions Of The United States Coast Guard
Verified purchase
I had read "The Finest Hours" by Michael J. Tougias and Casey Sherman and recommend it highly. I had high hopes for this movie adaptation of the book, and have to say that Disney did not disappoint. This movie is a film about the courage of seemingly ordinary people under great stress, and is faithful to the spirit of the rescue and the traditions of valor that run deep in the US Coast Guard. On February 18, 1952 two World War Two era T-2 tanker ships, the "Pendleton" and the "Fort Mercer" split in half within 40 miles of each other in a terrible storm off the northeast United States. Amazingly, portions of each ship remained afloat and the rescue effort was extremely confused at the outset as nobody was sure where the pieces were or what was still floating.

The book details the travails of both ships, but the film focuses almost exclusively on the "Pendleton". A crew of four was sent from the USCG station at Chatham, Massachusetts on the 36-foot rescue boat CG-36500 (which, by the way, is now preserved in a museum) under the command of Bernie Webber, here played to perfection by Chris Pine. The act of going out in that weather was heroic enough, but the rescue itself became legendary in USCG circles, and the onscreen depiction here is nearly perfect. Water is very hard to digitally model, but effects have gotten much better since "The Perfect Storm" was made, and here they look great. The "Pendleton" sets are amazingly realistic and the digital compositing of the stern of the ship against the frothing backdrop of the ocean is superb. Throughout the acting is first rate, though I'm unsure that the character of Ray Sybert (Casey Affleck) would have actually been so shy and retiring at the outset of the drama.

"The Finest Hours" is a great movie that I highly recommend for all adults and mature children. It's clean enough for all kids, though very young kids may be scared by some of the very realistic and frankly terrifying images of foundering ships. Disney did a great job with this one, and director Craig Gillespie ("Million Dollar Arm") shines through as one of the most versatile and capable in Hollywood. The DVD includes two very short extras, both of which were promotional shorts, one on the mission and people of the US Coast Guard, and one a behind the scenes look at the cast and production.
29 people found this helpful

Rhonda MReviewed in the United States on January 23, 2019
4.0 out of 5 stars
Based on a real life Coast Guard hero
Verified purchase
Spoilers

I watched the movie because of Chris Pine. I usually like his performances but not always his choice of rolls. I really liked this movie. Pine plays Bernie Webber (based on a real life Coast Guard hero) who, along with 3 other men, on a 36-foot lifeboat built for a safety maximum of 12 rescues 32 men whose tanker had been cut in half by a massive storm. The odds were stacked against them as they fight the storm, lose their compass, and battle crossing the treacherous Chatham sandbar.

The cast was great, with additional terrific performances by Casey Affleck, Ben Foster, Josh Stewart, and Kyle Galiner (to name a few). The only one who I thought did not add much to the movie was Bernie's love interest played by Holliday Grainger. I couldn't tell if it was her performance or the writing that made her arc of the movie a drag on the rest of it. Regardless of the amount of time spent on that plot line, I still enjoyed the movie and seeing Pine playing a shy, reserved and cautious character, as opposed to the bravado many of his characters have had.
6 people found this helpful

Annie DavenportReviewed in the United States on October 4, 2020
4.0 out of 5 stars
Powerful Corruption by a Powerful Company Culminating in Employee Deaths
Verified purchase
Finest Hours is based on the actual Deepwater Horizon tragedy off the Gulf Coast. Corruption is exposed in all of its ugliness and evilness. The top execs ultimately responsible for making the final call to begin drilling were on the rig at the time of the fiery explosion, but true to their cowardice, they were on the first of the life boats to evacuate even though there were critically injured employees in desperate need of immediate medical care. Eleven deaths, families forever torn apart, life-long emotional torment suffered by the survivors and their families, and untold destruction to the environment all driven by monetary greed.
This movie is gripping, well written. Kurt Russel becomes Mr. Jimmy, the offshore installation manager and top-ranking on-board employee of the rig owner, Transocean. The portrayal of where Mr. Jimmy was at the time of the explosion and the injuries he suffered are factual. The real life Mr. Jimmy has essentially pulled back into the shadows of life since 2010. His whereabouts and how he's been spending his time are unknown.
Some of the facts of that horrible day were abbreviated by Hollywood, but all in all, this movie walks close to the line.
An interesting pairing within this movie is Kurt Russel as Mr. Jimmy, and also his real-life step-daughter, Kate Hudson as Mrs. Felicia Williams, wife to Mike Williams, (played by Mark Wahlberg) Chief Electronics Technician onboard Deepwater Horizon rig and was caught in the explosion. Kate Hudson and Mark Wahlberg resemble Felicia and Mike Williams respectively.

Grandpa MReviewed in the United States on June 6, 2016
4.0 out of 5 stars
USCG Worthy?
Verified purchase
Having served in the Coast Guard in the '50s and been through several storms, especially one as bad if not worse than this one, I feel that the film makers did a fine job in capturing the realism of the sea in the midst of a terrible storm, catching both the surging force, shape, and power of the overly wildly turbulent waters. Yes, there were activities on board the ships that were not at all plausible, that could not and cannot really take place, getting around on deck for instance, but some of the realism had to give way for the story and for the finally impossible to put by seductive power of Hollywood conventions. For example, I did not like the changes made from the original circumstances as captured in the book from which the film was derived, the at times cutesy wife (changed to fiancé) story, for example. However the film adhered convincingly to what truly happened, with the film convention additions enforcing the focus and spirit of the great struggle to survive despite nature's implacable will and mankind's conflict with its own turbulent struggle brought on by an errant mind and imperfect heart.
4 people found this helpful

Robert DemickReviewed in the United States on January 4, 2022
4.0 out of 5 stars
Good movie, mostly accurate
Verified purchase
This is a good movie telling the true story of one of the US Coast Guard's greatest rescues! The movie is mostly accurate, but I would like to point out a few inaccuracies in it. The movie shows that Bernie Webber and his fiancee had recently gotten engaged and that she stormed into the Coast Guard station and accused the commanding officer of being incompetent and sending her fiance on a suicide mission. Not true at all! They had been married for about a year at that time and was at home with the flu and unaware that her husband had even gone out on the rescue mission until sometime after he got back. Second, the movie indicates that some of the enlisted men at the CG station voiced the opinion that their commanding officer, played by Eric Bana, was somewhat incompetent and too inexperienced to be in charge of the station and rescue attempt. Not true at all! Otherwise, the movie is very good and accurate. Incredible rescue! SEMPER PARATUS
See all reviews
Back to top
Get to Know Us
Make Money with Us
Amazon Payment Products
Let Us Help You
EnglishChoose a language for shopping. United StatesChoose a country/region for shopping.
© 1996-2022, Amazon.com, Inc. or its affiliates