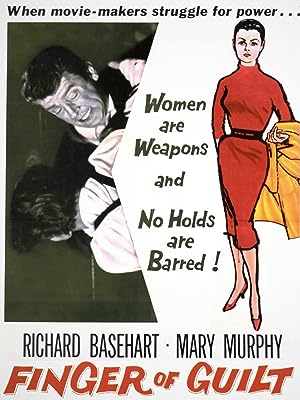 (9)
6.21 h 24 min195613+
A married movie studio executive's life starts to unravel when he is stalked by a seductively beautiful woman he claims he does not know.

joel wingReviewed in the United States on December 29, 2021
3.0 out of 5 stars
A story about manipulation
Verified purchase
Finger of Guilt is about manipulation. Richard Basehart is a successful British movie executive who starts getting letters from Mary Murphy claiming a previous affair. He claims it’s blackmail but it may be part of his controversial past. It’s a good drama that drew me in to see what was behind Murphy’s story and what Basehart was willing to do about it. The end has some great shadowing and Murphy gives Basehart a look that is to die for.
3 people found this helpful

SociologyReaderReviewed in the United States on July 8, 2022
3.0 out of 5 stars
Good acting from Richard Basehart
Verified purchase
This film has an interesting story line, in that it leaves viewers looking for clues as to why a woman claims a studio ex had been her lover -- and she knew so many details about him, but he has no idea who she is. The film is a bit slow moving, but I wanted to find out how it resolved! Richard Basehart does a fine job as the main character -- in expressing his anger and his confusion, as well as his resolve to not go down a wrong path and lose the trust of his wife.

This is directed by Joseph Losey who had a very long career in the U.S. and then the U.K. I love two of his other films from the 1960s starring Dirk Bogarde: "Accident" and "The Servant." "Finger of Guilt" pales in comparison, but it's still a good story and worth 90 minutes of one's time!

Todd M.Reviewed in the United States on November 13, 2021
4.0 out of 5 stars
It’s a tidy little 50’s British Pulp Fiction.
Verified purchase
It has some flaws like a poor film copy and a tiny picture format but the plot is simple, it works and the viewer is left in the dark to guess until the end. Though it plays like a TV movie and there’s not much to it but what you see is just enough to make a low budget movie work.
2 people found this helpful

M. LawrenceReviewed in the United States on April 20, 2022
3.0 out of 5 stars
No Alfred Hitchcock, but not bad
Verified purchase
A little cheesy, and it wasn't Hitchcock, but then again, who is?! I recommend it, though.
2 people found this helpful

BeeReviewed in the United States on November 29, 2021
4.0 out of 5 stars
Good Movie
Verified purchase
The movie was interesting and had an intriguing storyline.
2 people found this helpful
See all reviews
Back to top
Get to Know Us
Make Money with Us
Amazon Payment Products
Let Us Help You
EnglishChoose a language for shopping. United StatesChoose a country/region for shopping.
© 1996-2022, Amazon.com, Inc. or its affiliates