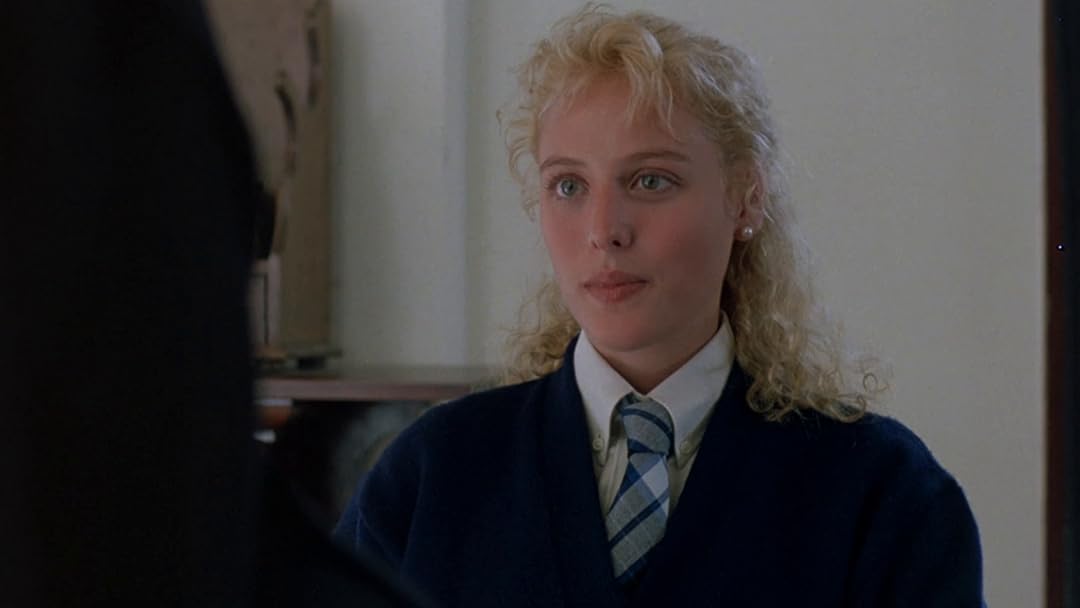 Michael CheckReviewed in the United States on April 24, 2021
4.0 out of 5 stars
Good DVD
Verified purchase
I'm glad the movie arrived in playable condition so I could revisit an old favorite. However, the sellers were damn lucky that it did. For future offerings, I would suggest that you charge a few more pennies for shipping and at least have a minimum of a padded envelope to protect the product. It arrived with a cracked case. And it was a miracle that it was not damaged. Or that it didn't fall off of the center spindle in shipping. When this happens, 9 times out of ten the disc gets scratched and damaged and does not play correctly. Save everyone time and effort by eliminating returns for damaged goods. Protect your product better in shipping. Otherwise, a great experience and a great DVD !
2 people found this helpful

Having grown up in the 80s I have a definite appreciation for the cheesy music and movies of that era. However, I truly don't place this move in the "cheesy" category simply because IT'S NOT. It is a beautiful love story between an unlikely pair of individuals. Sure, the "good" girl falling for the "bad" boy is not an original concept but these two have such amazing chemistry that you can overlook this flaw. Joe Fisk's character played by Craig Sheffer is really not a bad kid per se just slightly misunderstood who obviously came from a less than stellar upbringing. His Mom says she's going to marry her boyfriend who treats her poorly and this angers Joe. This being the reason he drove the car into a shop window hence the reason he's in prison camp. Lisa's character, played by Victoria Madsen, is a Catholic school girl who is deprived of love by uninvolved parents. The two have a chance encounter and even with a slight glance you can feel the immediate chemistry between these two. Then they have another chance encounter at the local theater where they again steal glances. But that's not enough so Lisa devices a way to meet Joe by organizing a school dance with the prison camp juveniles. As one would expect, the two meet at the dance and boy do sparks fly. The dance scene is mesmerizing and Madsen and Sheffer give a fantastic performance full of immense chemistry visible simply by the way they look at each other. It really has you believe they are falling in love with each other and would do anything to be together. It really is a great teen love story. I absolutely recommend you give it a chance.

While I love the ending I kind of wish it had been longer or had a sequel only to find out what happens to these two lovers. I know it's a movie and one shouldn't look to deeply, especially with a movie from the 80s, but I can never be fully satisfied because I'm left thinking of the practicality of their situation. Like what happens when they realize they now have nowhere to live, have no education or money etc. It's a nice thought but you can't live on love alone.

Aside from that it's still a great movie and absolutely one of my favorites! It's a surprise Madsen and Sheffer never went on to major stardom because I do think they had the makings for it. I'm guessing they fell victim to poor role choices and being popular in that strange time frame of late 80s early 90s which provided a lot of bad movies. In any case, I really like the both of these actors and LOVE this movie!

💗 Christina 💗Reviewed in the United States on November 8, 2019
5.0 out of 5 stars
One of the BEST movies I’ve ever seen!!!! I can’t stop watching it!! LOVE IT!! &lt;3
Verified purchase
Haven’t seen this since I was in my teens, in the 80’s!! I’m so in love with this movie, keep watching it over & over!! My favorite is the last dance scene, and of course the first " HI ". Craig & Virginia are exceptionally brilliant, especially for being young when they did this movie, although appeared younger then their actual ages. I think they were both in their early to mid 20’s. The passion & romance between them is superb, convincing, & electrifying!! Makes you want to fall in love all over again!! Love getting lost in this movie and the story line!! Would’ve loved to have seen another passionate love scene the 1st night they spent in the cabin!! I’m a hopeless romantic!!!! Loved the 2 songs, " I’m in it For Love " &
" Fire with Fire ". I was able to find them!! <3
One person found this helpful

ClaireReviewed in the United States on August 17, 2012
5.0 out of 5 stars
Finally on dvd!!!
Verified purchase
I admit this is a corny love story that is so totally 80's one would have to have grown up in that time to appreciate it. I think I was about 12 when it came out and don't think it even played in movie theatres here in Charleston, S.C. The only reason I knew about it was because the video for the theme song "Fire With Fire" played a lot on MTV back in 1986 and I remember watching it and wondering why all we saw in the video was clips of the movie- we did not even see any footage of the band playing the song. Not sure why that was but I wasn't complaining since the scenes they showed from the movie (and they showed a LOT of them since there was nothing else to show!) had me mesmerized- Craig Sheffer was quite the eye candy back then. He had the David Boreanaz ("Angel") look... I'm not sure why he never really went on to A-list status since he's a decent actor. He did do "Some Kind Of Wonderful" after this but since then I pretty much only see him on Lifetime movies. Virginia Madsen is also a great actress who always seemed pretty underrated until "Sideways."

Anyway, later in 1992, I remember "Fire With Fire" coming on HBO a lot and I finally got to see it in it's entirety and fell absolutely in love with it. I love movies where the young lovers run away without a care in the world leaving us not wanting to wonder realistically what happens to them when they realize they have no money, no education and presumably no where to go. Another 80's movie I love with the same scenario is "Reckless" (1984) with Aidan Quinn and Daryl Hannah who also run away to what they must hope are bigger and better things. I like to think this trend might have been influenced by Rod Stewart's video for "Young Turks" back in 1981.

I'm assuming if you are buying this movie it can only be because you are a fan and maybe owned it on video waiting eagerly as I did for it to be released on dvd. I'm so thankful to Olive films for releasing it. As for the dvd itself, not surprisingly, there are NO extras, not even subtitles. But I didn't expect any miracles- it is miracle enough to just have this awesome movie on dvd. The picture looks great and the songs have remained intact- something that seems to not happen sometimes when movies are transferred to dvd- for some reason different songs are used in places. (The movie "Shag" (1988) comes to mind in this case.)

This is a great little movie so I'm glad it's finally out on dvd since my VHS copy was starting to get worn out. Another movie I wish they would release on dvd is the 1988 Donovan Leitch movie called "The In Crowd" with a similar theme of young lovers running away. As for "Fire With Fire" I think the story is exciting, of course the script is flawed and the characters do dumb things like leave bacon burning on the stove catching the house on fire. But the scenery is beautiful and the songs are good. I love both lead actors as well as the supporting cast. I think it was a great little movie and worth the price but only if you are a real fan. I would never pay this much for a movie unless it was one I love and I do love this movie!
14 people found this helpful

Christina Reviewed in the United States on August 10, 2018
5.0 out of 5 stars
Great 80s movie, classic!
Verified purchase
I hadn't watched this since I was a kid but it had stuck with me to wear i have always been looking for it. When I found it here I was excited to say the least, and hoping my memory of it was correct still. So I sat down to watch and all the same feelings came back! It was such a great classic 80s movie! I was so happy and highly recommend this movie!
3 people found this helpful

Barack ObeagleReviewed in the United States on July 13, 2018
5.0 out of 5 stars
Virginia Madsen should have been a major star in her youth
Verified purchase
A great little gem from the 80's that show, along with "slamdance" and the HBO movie "Long Gone", why Virginia should have been a major star in the 80's. She eventually got her due in "Sideways" two decades later, but she should have been competing with Julia Roberts fro parts in this era. "Fire With Fire" is a great update on the eternal "Star Crossed Young Lovers" theme that has been around since "Romeo and Juliet". Hugely entertaining.
One person found this helpful

Dirk-David ToddReviewed in the United States on October 27, 2021
5.0 out of 5 stars
It’s a great movie from the 90s if you love movies from the genre, you’ll like this one
Verified purchase
I loved all of the movie; it’s funny and I love all the character actors and Craig Sheffer is the one who gets in trouble with beautiful blonde bombshell. He escapes from the farm prison. The they find the couple together and there is a fight scene. It’s a cool innocent movie yet had a lot of action!

PyewacketReviewed in the United States on November 21, 2015
5.0 out of 5 stars
Teenage romantic nostalgia at its best
Verified purchase
I first saw this film when I was in high school back in the 80's and it so closely paralled my own life at the time that I never forgot it. No film in the past 30 years has ever so correctly captured the feeling of two, virginal teenagers in love who share their first time in gorgeous, romantic perfection--despite protestations of external forces against them. It was a story written for those who have experienced mutually true love, and never forgotten the beauty of youth and innocent exhilaration of falling in love for the first (and maybe last) time.
4 people found this helpful
See all reviews
Back to top
Get to Know Us
Make Money with Us
Amazon Payment Products
Let Us Help You
EnglishChoose a language for shopping. United StatesChoose a country/region for shopping.
© 1996-2021, Amazon.com, Inc. or its affiliates