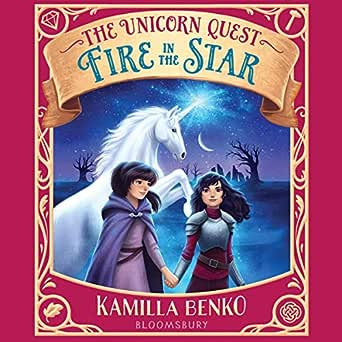 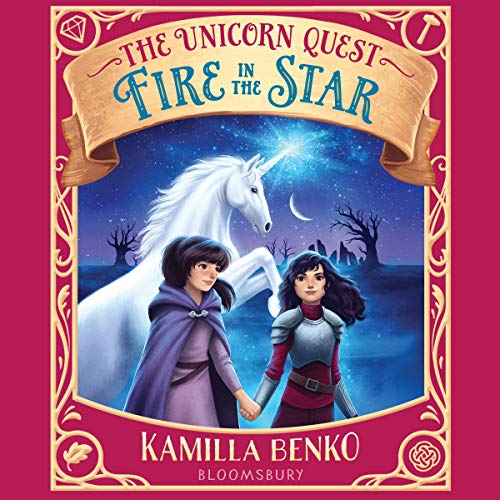 Fire in the Star: The Unicorn Quest, Book 3

4.7 out of 5 stars
4.7 out of 5
18 customer ratings
How does Amazon calculate star ratings?
Amazon calculates a product’s star ratings based on a machine learned model instead of a raw data average. The model takes into account factors including the age of a rating, whether the ratings are from verified purchasers, and factors that establish reviewer trustworthiness.
Top Reviews

Eabmrr
5.0 out of 5 stars Loved it
Reviewed in the United States on February 27, 2020
Verified Purchase
One of the best books I have ever read! I've been waiting forever for this book to come out.
Read more
3 people found this helpful
Helpful
Comment Report abuse

T.C
5.0 out of 5 stars All 3 books in series are good
Reviewed in the United States on March 28, 2020
Verified Purchase
My 12 yr old daughter loves it
Read more
Helpful
Comment Report abuse

I Am Blessed
5.0 out of 5 stars Great story
Reviewed in the United States on April 25, 2020
Verified Purchase
My daughter loves all of these books.
Read more
Helpful
Comment Report abuse

Heidi Grange
5.0 out of 5 stars A fabulous conclusion to an adventurous magical series.
Reviewed in the United States on May 1, 2020
This intense final book in The Unicorn Quest trilogy does not disappoint. As the story opens, Claire has left her sister, Sophie, and friends behind in Woven Root in an effort to find a way to stop her sister's transformation into a unicorn. But facing off with a deadly Spyden is only the beginning of her troubles as she also seeks the Crown of Arden in an effort to crown a queen to take on Estelle who threatens to become queen again and wipe out the last unicorn. But the Crown is in four pieces and Claire only has three days to get her hands on all four pieces. Complicating matters is the fact that the first piece she finds is a fake. With the help of her friends and allies, can Claire find a way to defeat Estelle and her wraiths and return unicorns to the land?

Benko concludes her series with a bang. The book contains plenty of excitement. I also found the twists and turns to be interesting as Claire and Sophie try to defeat the former queen and save each other. I also enjoyed the twist of Sophie turning into a unicorn, it made for an intriguing story line. I also enjoyed Claire and Sophie and their friends.They made great characters. The series as a whole does a fine job creating a fantastic and interesting world for the girls to visit. With plenty of ethical dilemmas and challenges facing the characters the books move along at a brisk clip making for an entertaining, yet thoughtful read. The themes revolve around difficult choices, friendship, family, and unity in the face of great threats. All in all, a wonderfully enjoyable series about light vs. dark, friends vs. foes, and love vs. sacrifice.

Kasey at Story Sanctuary
5.0 out of 5 stars Great for fans of Jessica Day George!
Reviewed in the United States on March 29, 2020
What a finale! I love sister books, so this series has been lots of fun to read. I love that it’s the little sister who’s the star of the books, too. I really enjoyed watching Claire find her gifts and her confidence and her place in the world.

FIRE IN THE STAR brings together a lot of characters from the earlier books, but it’s pretty easy to keep track of everyone as the story kind of refreshes you on who’s who as you read.

I also really loved that in the story, Claire and her allies all need each other, need to work together to save Arden. It meant learning to value one another, trust each other, put aside past grievances, and find a way to work together. Definitely a feel-good story in that sense.

This has been one of my favorite middle grade series, and I really can’t wait to see what Kamilla Benko writes next. She’s an author I wouldn’t hesitate to recommend to any middle or late elementary school-aged readers.

If you like books by Jessica Day George, you really need to check out The Unicorn Quest series.

Note: I received a free copy of this book in exchange for my honest review.

FantasyGirl
4.0 out of 5 stars Great Conclusion to a Magical Adventure
Reviewed in the United States on March 20, 2020
2020 is finally here and we have come to the end of Claire and Sophie's journey...at least, what is written down of their journey!

I did not remember a lot from the previous two books, but most of it gradually came back to me as I progressed through the book. Magic, unicorns, wyverns - need I go on? This trilogy is replete with the elements that make an exciting magical adventure. Currently, I am in a state of denial over the ending; in time, I know I will get over it. I recommend for middle school readers as it is a great fantasy read that displays the power of friendship and sibling love.
Read more
Helpful
Comment Report abuse

AMK
5.0 out of 5 stars My 2nd and 4th graders both loved these books
Reviewed in the United States on March 28, 2020
Great characters and a wonderful action story full of love, sisterhood, adventure and bravery. The two main characters are great role models for sisters. The books are fun and entertaining and appropriate.
Read more
Helpful
Comment Report abuse

Amanda
5.0 out of 5 stars My daughter and I loved it!
Reviewed in the United States on May 21, 2020
I like to read books that I can enjoy with my 10 year-old daughter, and this series is a gem! Her name is Claire and she has curly hair and loves to draw, just like Claire in the story. This one was perfect for her!
Read more
Helpful
Comment Report abuse
See all reviews from the United States

sophie
4.0 out of 5 stars Great book.
Reviewed in the United Kingdom on March 22, 2020
Verified Purchase
Bought this for my daughter who had read the other two books, she was so excited when it arrived and started reading it straight away. She's really enjoying it so far. Arrived in good time and in good condition so happy mum too.
Read more
Helpful
Sending feedback...
Thank you for your feedback.
Sorry, we failed to record your vote. Please try again
Report abuse

ADellaide
5.0 out of 5 stars It's Incredible!
Reviewed in the United Kingdom on February 23, 2020
Verified Purchase
This book was one of the best books I ever read. It has all the things a good book needs; adventure, suspense and magic. I also recommend the other books in the series, book 1 and 2, though this one is probably the best. I loved it, it's Incredible!
Read more
Helpful
Sending feedback...
Thank you for your feedback.
Sorry, we failed to record your vote. Please try again
Report abuse