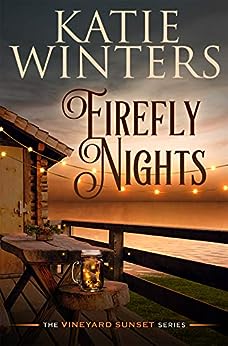 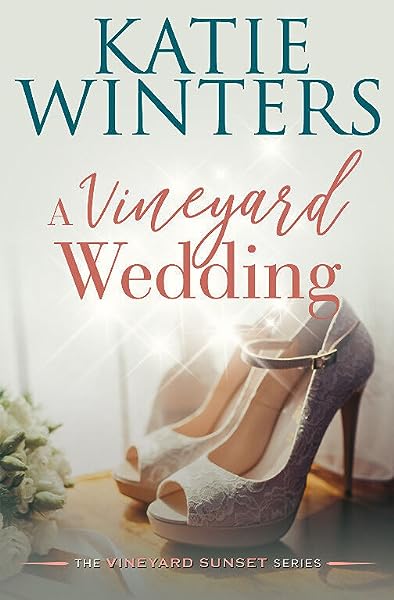 by Katie Winters (Author) Format: Kindle Edition
Book 2 of 12: The Vineyard Sunset Series
See all formats and editions
Sorry, there was a problem loading this page. Try again.

A summer the Sheridan Sisters will never forget.

Christine Sheridan is the middle sister of the Sheridan clan: lost between her older sister, Susan, a successful criminal lawyer and her whip-smart little sister, Lola. After twenty years apart, she and her sisters have just learned the secret their dead mother kept from them. They've finally learned their mother's true fate. Now, Christine returns to New York City, to her boyfriend Frank, to a life she once loved. But the prestigious restaurant they own is no more, and Christine is left once again without solid ground.

At forty-one, unable to have children, and with nowhere to go—she knows only to return home to the Vineyard and her family.

Martha’s Vineyard is in full summer bloom. After over twenty years away, Christine falls in love again with the water, with boating, the people, and with carefree days that meander and pop with bright conversations with Lola and Susan and long afternoon swims through crystal waters. Unfortunately, her high school rival, the ever-handsome Zach Walters, seems to lurk everywhere she goes—even offering her a pastry chef position at the Sunrise Inn Bistro. Almost reluctantly, she takes it—and soon becomes the most championed pastry chef on the island. Zach doesn’t seem so bad, either, although he does seem to harbor his own secrets.

Still, the Sheridan clan is never far from heartbreak. As the Sheridan sisters grow closer, their father loses even more of his memory; their mother’s real killer remains on the loose, as does Scott’s brother, who stole an obscene amount of money from the Sunrise Cove Inn. Secrets swirl through the family—and drama escalates when Lola’s daughter, Audrey, calls with shocking news that sends ripples through the entire Sheridan family.

Every day, the Sheridan sisters find new ways to support, enrage, love, and surprise one another. At forty-one, Christine feels caught between her old life and her new one—poised on the brink of either collapse or the greatest love she’s ever known. Will she find happiness on the island? Come and find out!

Dive into book two of this new women’s fiction series: a backdrop of white sand and crystal blue waters, following the Sheridan sisters’ heartwarming journey of friendship, loss, and love.

4.5 out of 5 stars
4.5 out of 5
2,055 global ratings
How are ratings calculated?
To calculate the overall star rating and percentage breakdown by star, we don’t use a simple average. Instead, our system considers things like how recent a review is and if the reviewer bought the item on Amazon. It also analyzes reviews to verify trustworthiness.
Top reviews

P. Blevins
5.0 out of 5 stars great
Reviewed in the United States on April 12, 2021
Verified Purchase
Firefly Nights: The Vineyard Summer Series Book 2 is by Katie Williams. This book is about the Sheridan sisters on Martha’s Vineyard. Scott has taken over doing the Inn maintenance while doing whatever else he can for Susan. Only he knows Susan’s untold secret.
Christine returned to New York and Frank to finish closing Chez Frank. What she didn’t intend to do was to end it with Frank; but she did and she and Felix, her cat returned to Martha’s Vineyard. The sisters were thrilled as was Wes, their Father. On the way back to the island, she ran into her high school nemesis, Zach Wilson. Zach was now the chef of the Bistro at the Sunrise Inn. She had a run-in with him before she had returned to New York. Now, they meet again. She thinks he is going to harass her about Chez Frank; but he had no idea it was closing. They were still enemies when they got off the ferry.
When Zach found out she was making a cake for her twin cousins fifteenth birthday, he offered the kitchen at Sunrise. She arrived the day before to make the cake, he showed her where everything was and helped her get the ingredients from his pantry, then he left. She made the cakes and went home. The next morning, she went to put the cake together. It was a lemon/lavender cake and icing for which she had been noted in New York. It took a long time to put the cake together. It was two feet high and had beautiful flowers all over it. Zach came in while she was finishing and admired the cake. He picked it up to get a closer look when Ronnie, the busboy came barreling through the door and hit Zach in the back. He dropped the cake and it splattered everywhere, even over Christine. Horrified, she blamed him for doing it intentionally. However, he ended up helping her bake another cake and decorate it for her cousins. The next day, he sought her out and offered her a job as pastry chef at the bistro.
The supplies at the Inn were delivered by Frampton Freights, owned by Scott and his brother Chuck. They delivered to the Inn and various other establishments throughout the island. Scott and Chuck were nothing alike. Scott was gentle and wanted to help others while Chuck was harsh and thought Scott was nuts. However, the freight company was successful. That was until Susan finally figured out why they were not making any money at the Inn. They were being swindled by Frampton Freights. When she confronted Scott, it was obvious that he knew nothing of this; but quickly figured out that it was Chuck. Scott confronted him and Chuck admitted it and admitted he was embezzling from the other establishments too. Then, he grabbed a backpack and quickly left. By the time Scott managed to call the police, Chuck had made the ferry and was off the island. He had stolen a great deal of money and Scott told everyone he would make it good; but their insurances and Scott’s covered it. Scott sold the company and went to work for Sunrise Inn fulltime. Meanwhile, Chuck was on the run.
Crises just keep coming up with the family. Christine keeps getting her feelings hurt when Susan and Lola talk about their children, or the children come to visit. This is because she cannot have children and that was her dream. Things get worse when Lola gets a call from Audrey telling her that she is pregnant and the father wants nothing to do with her or the baby. It is one of Lola’s worse nightmares come to life. Audrey was on the verge of starting her career and now it would be sidelined because of the baby. Life was repeating itself. Susan reveals her secret and the family is crushed.
You should read the book as there is much more going on, I only told a very little of the story.
Read more
2 people found this helpful
Helpful
Report abuse

Kindle Customer
4.0 out of 5 stars Oh, well
Reviewed in the United States on July 15, 2021
Verified Purchase
There is nothing wrong with this book that a grammar editor couldn't fix. So many misspelled words! And then on top of that, there are words that are out of proper order. That drives me nuts, but I m sure some folks won't even notice. Continue on with the series anyway......
Read more
2 people found this helpful
Helpful
Report abuse

Kindle Customer
5.0 out of 5 stars Love this series
Reviewed in the United States on August 12, 2021
Verified Purchase
Love these series, the sisters & there families coming together, how they work out there problems, sisters finding out about there mother & what really happened, helping there dad with what he's going thru,
Great reading material. I'm enjoying these books,
Read more
One person found this helpful
Helpful
Report abuse

Kathy M
5.0 out of 5 stars Firefly Good Read
Reviewed in the United States on February 5, 2021
Verified Purchase
Good second book in series on the Sheridan family. Learning more of the secrets and lies from over 20 years apart. Enough intrigue to keep one hooked until end of book.
Read more
One person found this helpful
Helpful
Report abuse

Amazon Customer
4.0 out of 5 stars Nice little story of family
Reviewed in the United States on September 18, 2021
Verified Purchase
Family is just that family. You have differences but you know where your foundation is. Life in this book moves beyond to the blessings they have all found is some of life’s difficult times.
Read more
Helpful
Report abuse

manzanillogirl
4.0 out of 5 stars Fun book
Reviewed in the United States on July 12, 2021
Verified Purchase
A book about sisters mother’s, grandparents and friend supporting each other through the goodness sadness and illnesses and joy of being a family.
Read more
Helpful
Report abuse

Marsha R. West
5.0 out of 5 stars Great characters
Reviewed in the United States on August 21, 2021
Verified Purchase
This book has very complex characters with lots of depths. The reader feels each could have his/her own story. Can't wait to read the next one.
Read more
Helpful
Report abuse

maggie
5.0 out of 5 stars Katie Winters Firefly Nights
Reviewed in the United States on November 5, 2021
Verified Purchase
Loving this series, about the Sheridans. Keeps me reading about a lovely family, and their lives Looking forward to the next book
Read more
Helpful
Report abuse
See all reviews

maya poley
5.0 out of 5 stars Fantastic Summer time read
Reviewed in Canada on August 12, 2021
Verified Purchase
The women are strong and couragious , the plots well written and the stories are so easy to fall in love with
Read more
Report abuse
See all reviews