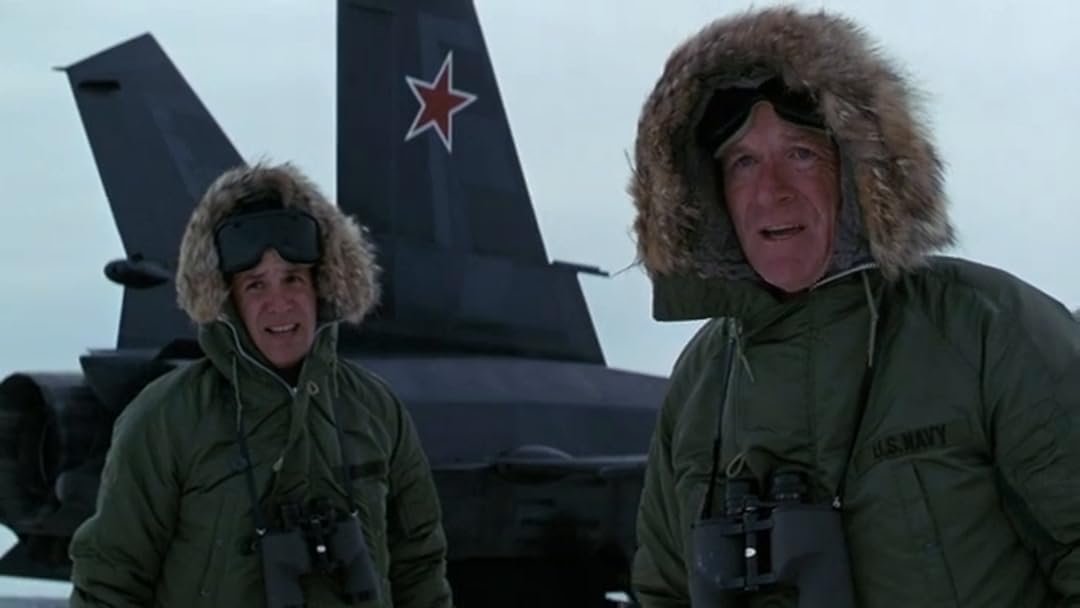 (3,433)
6.02 h 16 min1982PG
An ex flyer who is a distress victim from his Vietnam experience, isordered back into military duty to head a secret mission.

R. MillerReviewed in the United States on October 27, 2018
4.0 out of 5 stars
Not a movie about a web browser
Verified purchase
not a movie about a plucky web company putting out indie open source browsing software but instead about a plucky Alaska clean-livin wood-chopping veteran committing international grand theft aircraft. Clint makes like a blue collar James Bond. Doesn't do anything with bitcoin, election tampering, or track suits. But instead steals a plane. Gets chased by a safety inspector in an orange space suit. Daydreams about barbequeing an asian child. Stops off for drinks with some submarine guys under an iceberg. Flies past some bluescreen miniature terrain models. Does a barrel roll. Gets the girl.
Just kidding. There's no girl.
35 people found this helpful

TRVLRReviewed in the United States on December 9, 2019
3.0 out of 5 stars
It's about as good as I remember it from the 80's
Verified purchase
This is a role someone other than Clint Eastwood should have played. He's just not very effective as a fighter pilot or a spy. He of course has that gritty appeal that makes for a good soldier but as a fighter pilot...nah, not so much.

It was sort of a fun movie to watch with my son though who really had no idea what the Cold War was all about, this gave me the opportunity to explain a few things although I must admit this movie isn't really all that realistic...but then, what movies were in the 80's?

To Eastwood's credit this was one of his earlier ventures when he took on the three hats of Producer, Director, and Star and in many ways it was out of his normal wheelhouse of roles to play....but as for me, it's just not a role that fit him. Gritty detective? Yes! Loner Cowboy? Absolutely! Soldier? Sure.....but fighter pilot and spy? Meh, not so much.

Fortunately this is cheap to rent, so watch it...form your own opinion.

Veronica LakewoodReviewed in the United States on October 2, 2020
5.0 out of 5 stars
Dated but good ! Classic movie - way ahead of its time.
Verified purchase
When I was a kid , I read the novel , watched the movie and I wanted to fly the Firefox . Pilots recognize the Electronic flight information system that the plane seems to have way ahead of its time . But the thought controlled weapons system is an actual thing that is being researched . The movie is dated . The Soviet Union broke up in 91’ , everyone has a cell phone , we have a internet access in seconds instead of minutes - as opposed to the days when you maybe had one computer that wasn’t connected to the internet , nobody had a cell phone and we read books made of paper . It is therefore very dated . But in spited of that it is a fun movie which gives you a look into how things were in a previous era . The flying models are so so . We are spoiled by CG . Since this movie is pre Computer rendering technology , they used models and techniques like speeding up the film and then playing it back at normal speed and large matte paintings For backgrounds . In this movie they do excellent cranes and dollies .Its very easy to follow the action and know the story . The sub scene with the helicopters is primo ! It is still a very good movie .
2 people found this helpful

Paul S. PersonReviewed in the United States on April 9, 2020
3.0 out of 5 stars
Mediocre Eastwood
Verified purchase
This is one of those hyper-realistic spy thrillers, were "realistic" means "cynical".
Our Hero is recruited to penetrate a USSR air base and fly out with one of two Firefox prototypes because his parents came from the USSR, so he grew up speaking Russian really well.
Well, the /character/ may speak Russian really well, but /Eastwood/ does no such thing. Credibility: 0.
It also gets lost in the setup in Moscow, spending far too much time on that part of the film.
The trip from Moscow across the Urals to the Air Base is … abbreviated. There is no sense it is taking that long.
Still, the flight back is interesting, mostly when the Big Boss takes over and tries to run things. People don't actually get taken out and shot on camera, but who can say what happened after the cameras stopped rolling?
The actual climax doesn't take a whole lot of time. Oh, well, what can you expect when you spend /half the film/ trying to get out of Moscow?
So, unless you really /like/ the ultra-cynical approach to life, you might want to give this a pass.
One person found this helpful

JanetReviewed in the United States on July 1, 2019
5.0 out of 5 stars
One of my all-time favorites
Verified purchase
OK, so the special effects are a little old-school. Who doesn't get a thrill at seeing Clint pilot the Firefox over a forest, bending trees, and over the ocean, causing twin splashes? Man, I'd love to pilot that thing myself. I bought it because even though I've seen it over a dozen times, I still get a kick out of it.
5 people found this helpful

FredReviewed in the United States on November 5, 2018
5.0 out of 5 stars
One of Clint Eastwood's best roles
Verified purchase
I know, let's send a Vietnam vet pilot suffering from post-traumatic stress disorder on an undercover mission in which he has to impersonate one or more people and then steal an ultra-secret, supersonic aircraft that he must command by thought in Russian! No problem! Clint Eastwood showed layers of acting skill I was unaware he possessed. This is a winner.
6 people found this helpful

MadMacsReviewed in the United States on April 21, 2013
5.0 out of 5 stars
Deftly Avoids Over-Dramatization And Ridiculous Cold War Hyperbole
Verified purchase
From the get-go let me state that I was a huge fan of the novel that this film was based on, and was very stunned that the translation of that book into celluloid was equally as good. A freakish accomplishment given the notorious track record of such translations.

Also, let me preface that I'm a huge fan of Clint Eastwood. Long before he became the elder statesman of the film industry and winning several Academy Awards, these early directorial efforts proved that he was always much more than a rugged action star. In fact, I willingly suffered through films that I suspected I would dislike, simply to enjoy his performances.

Indications of his future brilliance were all on display in this 80's action/thriller.

Tells the story of Mitchell Gant, retired officer of the US Air Force. Having left the service due to what was then called Delayed Stress Syndrome, what we now call PTSD, Gant suffers intermittent and debilitating flashbacks when confronted with intense emotional situations; the illness grounding him into an early retirement. But a seminal breakthrough across the planet requires his very specific set of skills be employed once more.

Despite having access to thousands of current and former military pilots from across the free world, Gant is the lone aviator who fits a very specific profile needed for an emergency mission. In addition to being fluent in Russian and a former member of the Constant Peg Aggressor Squadron - US pilots trained in obtained Soviet aircraft and their combat styles - he's also a dead-ringer for a known heroine dealer.

As Gant is "volunteered" for the mission, it becomes clear that almost every intelligence and military officer involved in the secret project does not believe he'll succeed. With so many disparate parts and parties that have to synch perfectly, it's an unspoken but foregone conclusion that the effort is doomed. And any failure along the mission path equals tortuous death at the hands of the KGB -or- a lonely frozen death by drowning in the Arctic Sea.

For all intents, he knows this is a one-way suicide mission.

A very entertaining action/thriller with Eastwood guiding what could have easily wrecked with over-dramatization and collapsing into cold war hyperbole. His deft handing of the script emphasizing the thievery and thief - and less the geopolitical ramifications of a revolutionary combat airframe that threatens world peace.

- Firefox's author, Craig Thomas, wrote the novel based on his own air combat experience and strange rumors he had heard through the professional grapevine about a theoretical aircraft design that was said to be "invisible" to radar.

Though vehemently denied for a quarter of a century, in 1988, and nearly 12 years after Thomas' book was published in 1977, the United States announced that it had produced so-called stealth aircraft that were undetectable to radar detection systems of that period.

- The name Firefox is not the name associated with or given by the Soviet air force to their planes. Just as today with Russian aircraft, in the west we assign nicknames beginning with certain letters to help our forces quickly and easily identify opposition hardware. For example, the letters 'B' for bombers or 'C' for commercial. In the novel, an imagined MiG-31 advanced combat aircraft is given the NATO nickname of Firefox - 'F' for fighter.

- I'm a fan of character actor Freddie Jones, and absolutely love his typical presentation of character: The professional who speaks with emphatic pronunciation overlaid with a personality of smooth knowing guile. Thought his performance was superlative as the MI6 officer who authors the fantastical plan to steal Russia's most advanced aircraft.
11 people found this helpful

R. CarrilloReviewed in the United States on May 12, 2017
5.0 out of 5 stars
Gant but think in Russian and Love the People
Verified purchase
Can get enough of the lessons I learn from Mr. Eastwood and Mr. Gant but think in Russian and Love the People , " check your papers , and CHEK EM AGAIN '''' his show is a mix of Russian KGB and the secluded nation ready t5o break free and the Fire Fox is " WHAT A MACHINE "... MOTHER ONE , BOKOLS, CIA , UK INTELLEGANCE , EVERY PLAYER IS sport on , THE MUSIC , THE ARCHITECTURE , All of it is really greatly... . Call me up, I'll come over and I'll watch it with cha."

: OI
3 people found this helpful
See all reviews
Back to top
Get to Know Us
Make Money with Us
Amazon Payment Products
Let Us Help You
EnglishChoose a language for shopping. United StatesChoose a country/region for shopping.
© 1996-2021, Amazon.com, Inc. or its affiliates