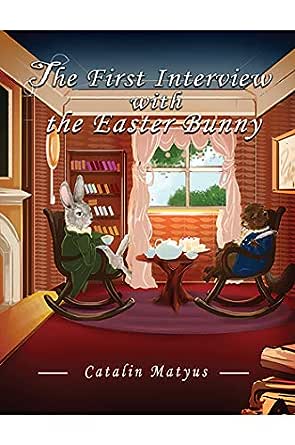 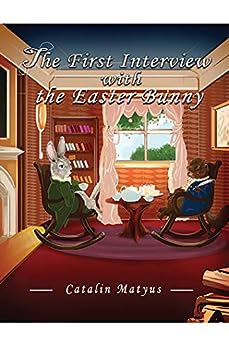 The First Interview with the Easter Bunny Kindle Edition

A Romanian native, Catalin Matyus has been a resident of Long Island, NY, since 2005.
Prior to settling in the United States, Catalin traveled to nearly every corner of the world working for Princess Cruises.
In 2008, he married Tricia, and together they have two children.
The interest for writing came together with the birth of his oldest son, and the wonder and joy in a child's eyes every time they hear a story about one of their magic heroes were the driving influence in starting and finishing the book before you.
Catalin believes that all of us have found ourselves, many times growing up, in the same situations as the great Easter Bunny, where we needed an extra dose of courage to overcome certain obstacles.
He hopes that everyone will enjoy this story while being inspired by the spirit of courage and goodwill our spring hero displayed from a young age. --This text refers to the hardcover edition.

5.0 out of 5 stars
5 out of 5
10 global ratings
How are ratings calculated?
To calculate the overall star rating and percentage breakdown by star, we don’t use a simple average. Instead, our system considers things like how recent a review is and if the reviewer bought the item on Amazon. It also analyzes reviews to verify trustworthiness.
Top reviews

michael
5.0 out of 5 stars Great story
Reviewed in the United States on September 4, 2020
Verified Purchase
Very inspirational book. You can tell the author took his time and wrote this book from his heart. Great story and great Illustrations. You can tell that Matyus put his touch thru out the story and pictures. This is our new go to before bed. Look forward to future books from Matyus. Great job.
Read more
Helpful
Comment Report abuse

Szakal
5.0 out of 5 stars Lovely story
Reviewed in the United States on September 9, 2020
Verified Purchase
The book will put you in another dimension. The kids will certainly enjoy the story and the beautiful art work throughout the book.
Read more
Helpful
Comment Report abuse

Richard Safran
5.0 out of 5 stars Fantastic
Reviewed in the United States on September 26, 2020
Verified Purchase
Absolutely loved this book!! We bought it and enjoyed it so much we bought a few more for the grandkids.
Read more
Helpful
Comment Report abuse

Kevin Moore
5.0 out of 5 stars Every Bunny has a beginning
Reviewed in the United States on September 19, 2020
Verified Purchase
Finally a story about the Easter Bunny! Constantly overlooked and forgotten but not anymore. Your kids will love learning a fun origin story for this under appreciated super-spreader of spring cheer.
Read more
Helpful
Comment Report abuse

Altide gabriel
5.0 out of 5 stars The First Interview with the Easter Bunny
Reviewed in the United States on September 16, 2020
Verified Purchase
I loved the illustrations and the writing, Perfect for kids of age 5-9.
Read more
Helpful
Comment Report abuse
See all reviews

Mihaela
5.0 out of 5 stars Beautiful illustrated
Reviewed in the United Kingdom on September 3, 2020
Verified Purchase
A beautiful story that I enjoy reading to my girls, definitely recommend.
Read more
Report abuse
See all reviews