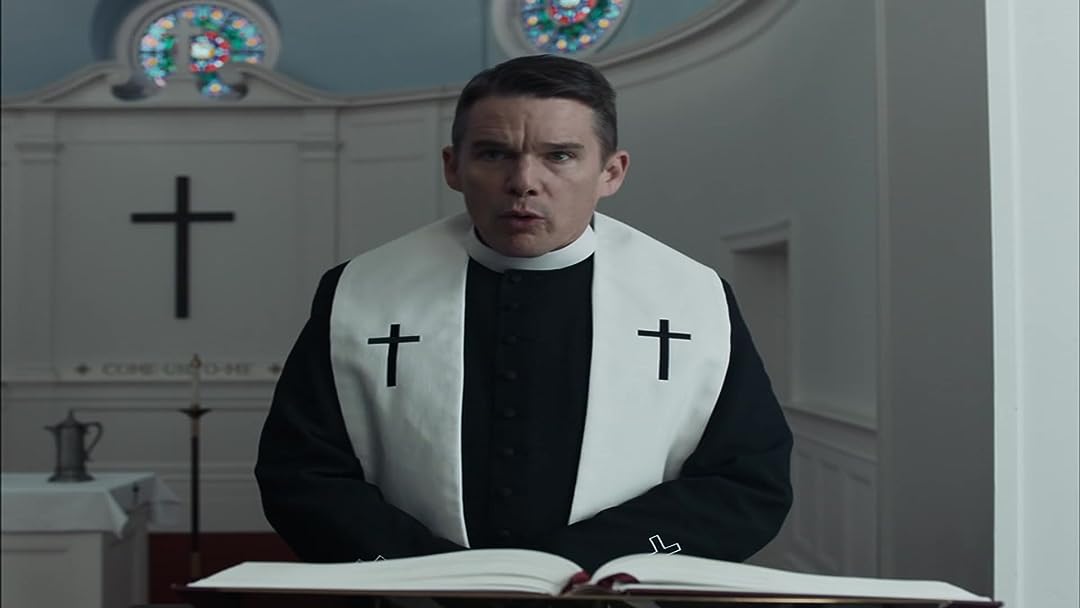 (1,278)
7.11 h 53 min2018X-RayHDRUHDR
The pastor (Ethan Hawke) of a small church in upstate New York spirals out of control after a soul-shaking encounter with an unstable environmental activist and his pregnant wife (Amanda Seyfried) in this taut, chilling thriller.

Daniel L. CookeReviewed in the United States on August 23, 2018
5.0 out of 5 stars
Awesome Film For Our Times
Verified purchase
This spare, minimalist film managed to pack so much into its running time and do in in balanced, effective and provocative way. The film addresses despair…despair over the condition of the world, despair over our personal life condition and the connection between the two. Can religion offer hope and guidance, or is it just another BS commercial enterprise?

This film addresses the issues of life and living far better than most religious institutions. If anyone is looking for a true film that deals with the realities of faith and life they would be far better served by this film than by the latest garbage from Pure Flix or any of the so-called "faith based" films of recent years.

J. McdanielsReviewed in the United States on September 8, 2018
5.0 out of 5 stars
What a great dark spiritual based film
Verified purchase
What an interesting spare spiritual film. We never see serious spiritual films that deal in real world issues, this is that film. Beautifully acted and very serious. This film and especially the ending will cause you to ponder, but it is well worth it. I'm an atheist who loved this film that dealt with serious issues of faith without blinking. Very special and unique.
121 people found this helpful

SheriLynnReviewed in the United States on November 19, 2018
1.0 out of 5 stars
Pee Yew
Verified purchase
Not taut, not chilling, not a thriller. Tagline should have said, flabby, tepid and a bonafide conduit of ennui. The untalented writer couldn't even come up with an ending, so he just let it spiral down the toilet and hoped viewers would think it was cerebral. Luckily, as soon as I finish writing this review, I will forget it. It may have taken 2 hours of my precious time, but it won't get another second.
86 people found this helpful

C. C. BlackReviewed in the United States on September 2, 2018
4.0 out of 5 stars
A Serious Film about Serious Matters
Verified purchase
A character study that draws deeply from writer/director Paul Schrader's personal experience, "First Reformed" is an updated, Americanized blending of Bresson's "Diary of a Country Priest" and Bergman's "Winter Light." All the performances, from large to small, are believably first-rate. The audio commentary by Schrader will interest those who want to know how the director made his casting and especially camera selections. For me, the movie lacks those moments by which I know I've seen a great film, but it's a very good one that I suspect will wear well in years to come. Caution about the Blu-Ray edition, which I purchased first and returned almost immediately after receipt: the chapters had somehow become scrambled in playback. I exchanged the Blu-Ray for a regular DVD, which performs without a hitch. Since the film was deliberately shot with a muted palette, you lose a crispness of image with the DVD, but little more.
65 people found this helpful

Books on tapeReviewed in the United States on November 26, 2018
1.0 out of 5 stars
A real yaaaaaawner.
Verified purchase
What a snooze fest this one was! A movie about a boring minister who narrates the film with intensely meaningless drivel. No wonder why this guy only has four people in his congregation. And what a brilliant ploy by the global warming alarmists... just fill the churches with ministers like this guy and half the congregants will eat lead happily, thus depopulating the world and no more warming, or something like that. I suppose if we read Thomas Merton, we'd get it though? No thank you.
58 people found this helpful

CharlesReviewed in the United States on May 22, 2018
5.0 out of 5 stars
Light 4.5 // A dark, memorable, and well-written examination of extremism
A dark and thought-provoking examination of the mind’s vulnerability to extremist thought. Writer-director Paul Schrader’s past screenplays include Scorsese classics Taxi Driver and Raging Bull, and First Reformed manages to live up to that high standard. This is a very smartly written film that manages to juggle a number of huge themes - environmentalism, climate change, mental illness, addiction, existentialism, conspiracy, martyrdom, religion and its intersection with capitalism - with finesse and confidence. Every character and plot development in the film work harmoniously together to thoroughly explore these ideas as it builds, increasingly unsettlingly, towards its memorable and potent conclusion. Though the film is dark and at times quite disturbing - which is very much thanks in part to the absolutely chilling score by dark ambient musician Lustmord - it also smartly throws quite a bit of dry, black comedy into the mix to play up the more absurd aspects of the story. Ethan Hawke gives an excellent, layered performance as well of a character whose outward composure conceals his swirling inner turmoil. Overall an accomplished and unsettling examination of some highly topical themes with a strong screenplay that’s likely to reveal more with repeat viewings.

Roy HobbsReviewed in the United States on August 29, 2018
5.0 out of 5 stars
Best Film of 2018
Verified purchase
Paul Schrader's best work in years, and possibly of his entire career (along with "Mishima"). This is a must see for serious film lovers. Ethan Hawke and the supporting cast all are great and the script/camerawork/music are superb.
51 people found this helpful

Esther ShinReviewed in the United States on August 23, 2018
4.0 out of 5 stars
i'm not sure
Verified purchase
i know i'll never watch this movie again, but it was an experience worth going through once. i'm still in a bit of pain. ethan hawke is deeply intense, spiritual, thoughtful. i like his quiet depth.
43 people found this helpful
See all reviews
Back to top
Get to Know Us
Make Money with Us
Amazon Payment Products
Let Us Help You
EnglishChoose a language for shopping. United StatesChoose a country/region for shopping.
© 1996-2022, Amazon.com, Inc. or its affiliates