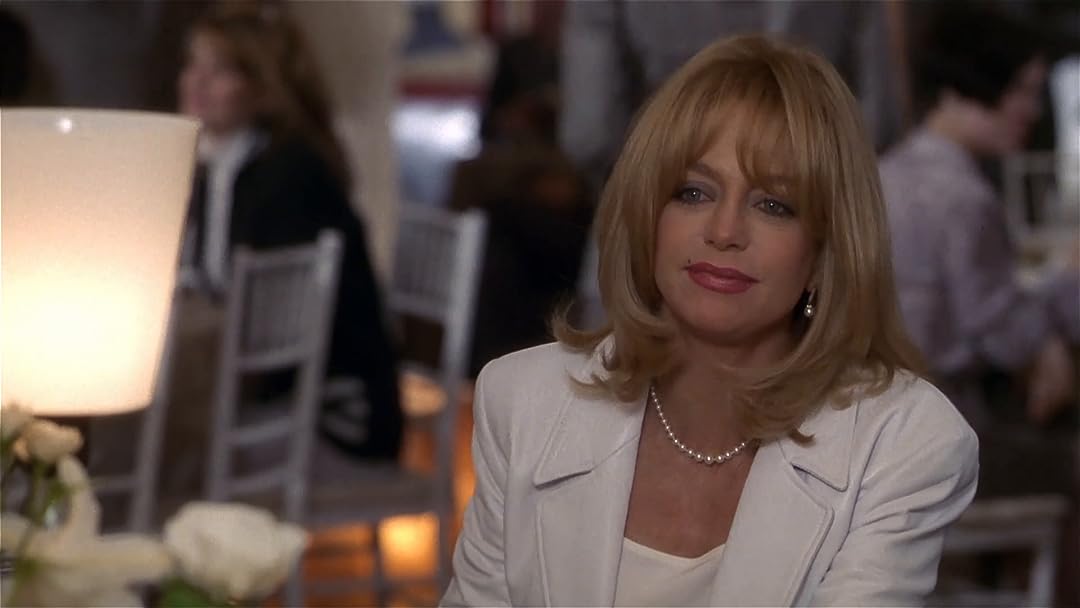 (7,077)
1 h 42 min1996X-RayPG
Bette Midler, Goldie Hawn and Diane Keaton are longtime friends. After years of helping their hubbies climb the ladder of success, each has been dumped for a newer, curvier model. But the trio is determined to turn their pain into gain.

Khristine JacksonReviewed in the United States on September 12, 2020
5.0 out of 5 stars
My... G.I.R.L.S ......
Verified purchase
I remember when this movie came out in the theater's... I never had a chance to see it then.. I did watch parts of it on cable television one afternoon.. Well it's a Friday the week after "Labor Day".. and what's a gal to do..? Well I decided to put it on my Laptop and watch it.. First of all let's get started on the beginning of the movie ..Stockard Channing most certainly has a memorable part ..brief as it was ..it was very sad. Can you imagine falling in love and getting married to a man.. That you would presume that you could spend the rest of your life with..? Only to become "Divorced" and then replaced with a beauty.. "Younger" girl ...?? I love this movie because the actresses such as "Goldie,Diane and Bette" were a perfect match.. The men playing their spouses did a wonderful job too.! Steven Collins,Dan Hedea and Victor Garber.. I even like the daughter who..over emphasize's ..the fact that she is a Lesbian... Let me tell you.. The 1990's was a terrific time for all women... especially the clubs... (Inside joke..) . Sarah Jessica Simpson ...(Pre- Carrie Bradshaw) days ...played the Gold digger GF to Bette's ex husband. Supporting cast was great as well.. Watch the last ...towards the end.. You will see the Original Mrs. Trump...
9 people found this helpful

Double HappinessReviewed in the United States on March 28, 2020
1.0 out of 5 stars
This movie could have been so much better
Verified purchase
I love Goldie Hawn. I watched this movie just to see her. I watched the whole thing, all the way to the end. If Goldie had not been in it, I would have turned it off after five minutes.

I also appreciate Diane Keaton - - she saved a lot of terrible scenes just by being there.

And, I love Stockard Channing, so, of course, I was very disappointed to see that she was only in the first few minutes of the movie. She should have had the role of Brenda.

This movie had an all-star cast, so I was very disappointed in the story. The story took so long to tell that, by the end, I didn't care anymore. It was full of meanness and anger and depressing to watch. The goal of the movie was revenge. We all know (or should know) that revenge takes so much out of you that, in the end, you are exhausted and more hurt than the person whom you set out to get revenge upon- - it isn't worth it - - "Living well is the best revenge," so just move on and be happy, and whomever has wronged you will see that you are the better person and will regret what they have done to you, and you can have a clear conscience in the end. And, of course, it is never right to put children in the middle.

I noticed something - - at the last scene, the three women are dancing. Goldie Hawn is wearing a gorgeous white outfit with white thin-multi-strapped heels - - and as they walk out together (still kind of dancing a stroll), Goldie's shoes have changed to white thicker-heeled mary-janes - - her shoes are very obviously different and, since they have been continually dancing, she couldn't have had a chance to change them. Anyway, I preferred the second pair of heels.

Mike TarraniReviewed in the United States on August 7, 2021
5.0 out of 5 stars
Timeless film, but showing its age in a societal context
Verified purchase
I won't give away plot details, but will say that I enjoy rewatching this film almost as much as when I first saw it when it was released twenty-five years ago. The writing, directing and casting all contribute to making the storyline magical (in my opinion.) The subject here is spouses who use their marriages to climb socially and/or financially. That is relevant to this day. Even with plot changes the subject at a high level will remain relevant because it's people using a relationship to gain something, then dispose of the relationship.

Personally, the acting is what keeps drawing me back to rewatch the movie. And the dynamics, of course. As an added bonus the cast of cameo characters, such as Ed Koch and Gloria Steinem, add familiarity to some scenes for folks in my generation who knew them as household names. Of course, there are more, but these two spring to mind because they were in a scene together. And the cast of supporting actors is mind boggling. I don't know what the budget of this film was, but when you add folks like Maggie Smith, Victor Garber, Marcia Gay Harden, Sarah Jessica Parker, J. K. Simmons (to name only a few), you just know that the budget was substantial. Of course twenty-five years ago some of those folks were not exactly household names, but supporting actors like Rob Reiner and Heather Locklear were. And all of the aforementioned, and the ones who I did not name added to the story telling in their own special ways using their distinctive talents.

It would be easy to assume that this is a fluff piece that is predictable. It isn't. It is supposed to be a comedy, but it touches on some painful and dark aspects, and the arcs of some of the main characters ended in (to me) surprising ways.

Still, it's foremost entertainment, and is a film that I thought highly enough of to replace my scratched copy with a brand new disc. Your mileage may vary.
6 people found this helpful

Madison T. EdwardsReviewed in the United States on July 3, 2017
5.0 out of 5 stars
Friends Forever
Verified purchase
I loved The First Wives Club years ago when it first came out and I still love it. I had some rare downtime over the weekend and decided to watch this movie again. I sat down and watched it like I'd never seen it before. This movie is still a delight and I loved it from beginning to end. This is one of those movies that will make you laugh, cry, get angry and be happy. I loved that the friendship between Bette, Goldie and Dianne re-kindled, even though it was due to a tragic reason. These three women are so different from each other, but they had a special bond that didn't diminish due to the time that had passed. I hate that Cynthia didn't reach out to her friends before doing the unthinkable - but it was sweet that she mailed each of them a letter before to prove that they were always on her mind. This definitely got me to thinking about my friendship than span over 40 years - Friends forever!

I especially loved the song and dance at the end of the movie - I watched them sashay all the way down that street. Awesome movie!
23 people found this helpful

Lina Moreno-GoldsteinReviewed in the United States on September 19, 2019
5.0 out of 5 stars
I remembered this was good, but not this good!
Verified purchase
Clever and witty script, with great comedic actors who sometimes can be caricaturesque, but it fits well in this movie. I remember enjoying First Wives Club when it was released, and I loved watching it now, when I'm at an age similar to the characters'; I loved the added perspective.

This is simply a well written, compelling subject matter, that will forever be current. I believe this to be completely classic material. It has an air similar to 1939's "The Women" which was remade in 2008. Both versions are fantastic. If you like this movie, I recommed you watch those films as well.
10 people found this helpful

Angela Adilyah MichelleReviewed in the United States on May 8, 2020
5.0 out of 5 stars
Abused Wives
Verified purchase
This picture speaks loudly about the secrets of wives who are abused and misused by their husbands and they feel so alone in a very evil and sad situation. I hate that a part 2 was not done on this very important movie. I believe that there may have been some that felt that this movie cut to the chase and spoke volumes about those things that are not revealed in some marriages and not just the poor families but the those who are middle class and rich as this one portrayed. There need to be a crisis center for women and children all over this world and especially in the USA!!! I pray that someone like the three sisters in this movie(Bette, Goldie, and Diane) who played their parts excellently and have touched many hearts but many are afraid to admit it. I am not! I AM ONE OF THOSE WIVES! GOD BLESS YOU THREE! PLEASE DO A SEQUEL. LOVE YOU. Please make the hard working wives, mothers, and single ones know that you are a mouth piece for us all. Look forward to your sequel I speak this in GOD JESUS NAME I PRAY AMEN
4 people found this helpful

AntidoteReviewed in the United States on September 24, 2022
3.0 out of 5 stars
Edited Version of the film
Verified purchase
I have seen this film several times and was really excited that it was finally getting a blu-ray release under the Paramount Presents line. Upon watching the film I noticed that the soundtrack which included a song "In The Game Of Love" by Brownstone has been replaced, I suspect maybe due to user rights. The track should be played when Diane Keaton's character meet up with her husband for dinner. I checked my old DVD and the track had been replaced back then as well. If I recall correctly it was on the Laserdisc release that had the song intact in the film. Hopefully one day it will be restored on a future release. While the film was great it would have been nice to have it the way it was and should be, in the meanwhile I am a little disappointed Paramount!
One person found this helpful

Nancy DockenReviewed in the United States on October 30, 2016
4.0 out of 5 stars
For those times when you need something to make you laugh
Verified purchase
Such a delightful cast! It had been a long time since my last viewing, and I remembered it wrong. I thought it was all about man bashing. But I really wanted to watch something where I knew I'd have a few laughs, and it turned out to be exactly the right decision. The laughs kept coming and they got louder as things went along. The scene where the girls' only escape is via the window washer's rig is absolutely hysterical. It may be true that "You Don't Know Me", but watching the girls become better women was worth every moment.
17 people found this helpful
See all reviews
Back to top
Get to Know Us
Make Money with Us
Amazon Payment Products
Let Us Help You
EnglishChoose a language for shopping. United StatesChoose a country/region for shopping.
© 1996-2022, Amazon.com, Inc. or its affiliates