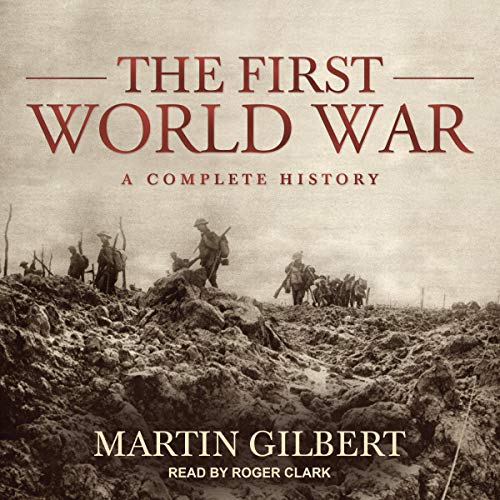 It was to be the war to end all wars, and it began at 11:15 on the morning of June 28, 1914, in an outpost of the Austro-Hungarian Empire called Sarajevo. It would officially end nearly five years later. Unofficially, however, it has never ended: Many of the horrors we live with today are rooted in the First World War.

The Great War left millions of civilians and soldiers maimed or dead. It also saw the creation of new technologies of destruction: tanks, planes, and submarines; machine guns and field artillery; poison gas and chemical warfare. It introduced U-boat packs and strategic bombing, unrestricted war on civilians and mistreatment of prisoners. But the war changed our world in far more fundamental ways than these.

In its wake, empires toppled, monarchies fell, and whole populations lost their national identities. As political systems and geographic boundaries were realigned, the social order shifted seismically. Manners and cultural norms; literature and the arts; education and class distinctions; all underwent a vast sea change.

Special invitation from Audible!
Learn more about Membership
List Price: $31.49
You Save: $3.94 (13%)
By completing your purchase, you agree to Audible’s Conditions Of Use
Sold and delivered by Audible, an Amazon company
Share

4.6 out of 5 stars
4.6 out of 5
565 global ratings
How are ratings calculated?
To calculate the overall star rating and percentage breakdown by star, we don’t use a simple average. Instead, our system considers things like how recent a review is and if the reviewer bought the item on Amazon. It also analyzes reviews to verify trustworthiness.

Mike PowersTop Contributor: Chess
5.0 out of 5 stars Martin Gilbert's "The First World War" provides readers with a good understanding of World War I and why it happened.
Reviewed in the United States on July 21, 2018
Verified Purchase
The year 2018 marks the 100th anniversary of the end of World War I, also known as “The Great War” and “The War to End All Wars.” It was one of the bloodiest and most violent wars in human history, and any understanding of our war-torn world since 1918 begins with an understanding of it – why it began, how it was fought, and what effect it has had on humanity since it ended.

One of the best books I’ve read about World War I is "The First World War: The Complete History” by Martin Gilbert. First published in 1994, this book provides a comprehensive look at the Great War from its beginning in 1914 until its end four years later. I think it is a superb work of history.

Martin Gilbert (1936-2015), a British historian and biographer is probably best known for his multi-volume official biography of Sir Winston Churchill. However, he also wrote many other excellent works of history, including “The Holocaust,” “The First World War,” and “The Second World War.” In all his works, Gilbert provides readers with a smooth, easy, and highly readable style.

In “The First World War,” Gilbert provides wide-ranging coverage of nearly every front in this genuinely world-wide war. Most people today associate World War I with mud-caked soldiers bleeding in the trenches of the western front in France; however, there were many other fronts as well. Gilbert takes readers to eastern Europe, along the border between Germany and Russia, where there were scenes of savage combat. In the Balkans, a bitter war raged between Austria, the Ottoman Empire (Turkey), and Bulgaria on one side, and Serbia, Italy, Greece, and Britain on the other. At Gallipoli, Gilbert describes Britain’s failed attempt to break the stalemate on the western by attacking the Central Powers in the east. And back on the western front, he takes his readers into a starkly barren, cratered "no-man's land," where poison gas, colossal artillery bombardments, and massed infantry assaults were the order of each day.

In every respect, “The First World War: The Complete History” is an outstanding book that will provide readers with a greater understanding of the causes, effects, and events World War I. Highly recommended.
Read more
56 people found this helpful
Helpful
Report abuse

Clyde Desmond Macalister
4.0 out of 5 stars A Good First Generic Book to Read on the Great War
Reviewed in the United States on March 19, 2019
Verified Purchase
As with many books I read, the value I placed on this book vacillated between a full five stars to three stars as I proceeded through it. This work has its pronounced strengths and weaknesses alike.

Among the strengths, I would include the fact that it was reasonably well written, though I did not care for Gilbert's periodic use of the phrase "wreak havoc" throughout the book. This sort of cliché is perhaps C+ quality writing in undergraduate courses, but it has no place in the work of a writer and historian who has been knighted, as has been Gilbert.

One moderate weakness of the book, I feel, involves Gilbert's inadequate devotion to the political machinations determining the course of events during the war. He sufficed in this regard both at the beginning and the end of the book -- that is, in the period directly before and directly after the war -- but failed to do so meaningfully throughout the war itself. He didn't dodge it wholly, but he could have bothered to discuss (for example) the British imperialist and Zionist agitators and lobbyists who hoodwinked Wilson and the Americans into the war. Speaking of Zionism, he barely even hints at the mere occurrence of the Balfour Declaration, and perhaps discusses Lord Balfour himself in a total of five lines throughout the entire book. I consider this a defect, given the pivotal influence of this man and his Declaration on the course of the war. If the book had advertised itself as a *military* history, these political omissions would make more sense, but the subtitle of the book, let us not forget, is _A Complete History_, which one would presuppose to include the political aspects of the war as much as those of the battlefield.

Sir Gilbert could also have more lengthily discussed some of the lesser contributors to the war -- Italy, Romania, Bulgaria, the Czechs, and especially Japan. I understand they were not as important, but they are important enough, in my view, to warrant a bit more attention than Gilbert afforded to them.

Returning to more of the book's strengths, I would note that Sir Gilbert excels at adding a human quality to the war by returning to the experiences specific, individual persons who suffered through it, from more famous individuals such as Albert Einstein, Adolf Hitler, Ludwig Wittgenstein, Douglas McCarther, and others, to everyday common soldiers. In this way, he aids himself with the poetry, letters, and other writings of those on the fronts, and all of this does a great deal to illustrate the horrors and inhumanity of the war. I found myself particularly fond of his recurrent reference to the experiences, writing, and so forth, of the English writer Vera Brittain, who lost many loved ones in the war and whose writings in the decades after the war both reflected and contributed to the collective memory and perception of the war.

On the whole, its follies notwithstanding -- and despite the sort of aimless meandering around about nothing in particular in the last chapter -- this book makes me eager to read Gilbert's book on the Second World War. I also assume his atlas book to the Great War makes for a good companion to this one, so I plan to read that one quite soon, as well.
Read more
37 people found this helpful
Helpful
Report abuse

The bulk of the book is devoted to detailed accounts of what must appear to the reader to cover each and every battle in the war. A great deal of coverage is devoted to describing named individuals who had been involved (many of whom had sacrificed their lives), quoting from their poetry, letters and diaries. Included also are a great deal of gory details. The author must be complimented for his meticulous research.

In all, the book is a great tribute to the heroes who had made extreme sacrifices. But for a reader who is interested rather in an overall understanding of the war, I find it a bit too much.
Read more
13 people found this helpful
Helpful
Report abuse

ladysupermarket
5.0 out of 5 stars Im surely picking up the next one
Reviewed in the United States on September 19, 2018
Verified Purchase
We think we know things and of course most of the times it is not true. The Entente was always loosing. This is a big, hard, suffocating, sad, and anxious read, that clarifies so many things for me. The Great War was almost lost since the beginning. And there was never a point of place were the Allied were clearly superior. That is a very scary thing to realize, knowing what will come after.

This book is so well researched and edited, the work is superb. The maps are helpful but I find that sometimes I got lost in all the details, maybe because I am new at reading military history. One thing I could not make myself care more about was the poetry, I found myself skipping on it, even when I knew it was there to bring more emotion to all the facts. I am surely reading picking up The Second World War.
Read more
18 people found this helpful
Helpful
Report abuse
See all reviews

Mr F
5.0 out of 5 stars Five Stars
Reviewed in the United Kingdom on August 17, 2018
Verified Purchase
As described and arrived quick
Read more
One person found this helpful
Report abuse

Arnab Paul
5.0 out of 5 stars Five Stars
Reviewed in the United Kingdom on July 3, 2016
Verified Purchase
Informative and events are very clearly explained.
Read more
One person found this helpful
Report abuse
See all reviews
Back to top
Get to Know Us
Make Money with Us
Amazon Payment Products
Let Us Help You
EnglishChoose a language for shopping. United StatesChoose a country/region for shopping.
© 1996-2022, Amazon.com, Inc. or its affiliates