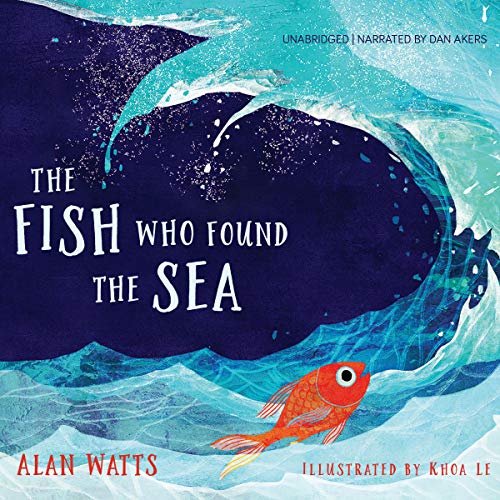 The Fish Who Found the Sea

A rediscovered treasure for a new generation: the first and only story for children ever written by Alan Watts.

Alan Watts, beloved for bringing a childlike wonder to the spiritual journey, once wrote a story for children. The Fish Who Found the Sea brings this delightful and wise parable to life for a new generation. Here is a story as timely as it is entertaining - sharing a key message about getting into harmony with the flow of life.

In this tale of a tail, we meet a fish with a curiously familiar problem - he’s gotten himself so mixed up that he spends all his time chasing himself in circles! Only the Great Sea knows how to help our poor fish get out of the mess he’s created with his own runaway thoughts. Here is a parable that perfectly captures the wit and wisdom that have made Alan Watts a timeless teacher we will never outgrow.

Your audiobook is waiting!
Learn more about Membership
List Price: $7.69
You Save: $0.70 (9%)
By completing your purchase, you agree to Audible’s Conditions Of Use
Sold and delivered by Audible, an Amazon company

Amazon Customer
5.0 out of 5 stars Beautiful
Reviewed in the United States on July 15, 2020
Wow. What beautiful art and story. Such a gift for this to be published newly. Thank you!
Images in this review

Amazon Customer
5.0 out of 5 stars After all these years...
Reviewed in the United States on September 27, 2020
Verified Purchase
I was delighted to read the only children's book written by Alan Watts. I purchased this book with the intention of giving it to a neighborhood girl age 5 who lives a few houses from mine on this street, but I may keep it. I am a fan of Alan Watts and his philosophy truly informed me for many years. Now, at 88, I have saved many of his books.
Read more
26 people found this helpful
Helpful
Report abuse

Historybuff
5.0 out of 5 stars Watts is a genius. I did not say that....yet.
Reviewed in the United States on April 23, 2021
Verified Purchase
Illustrations are perfect. Watts makes me want to go back and read every book ever written by anyone who has every written. In the end, we understand the routine is in cohoots, coersion with the randomness.
I did not ask for this deep thinking with a children's book that gave me elation and simultaniously feelings of COVID- as though my DNA was literally scrambling itself. My 26 six year old son told me I need to check Watt's out, and his latest great suggestion was to stop wearing coats that look like bathrobes so of course I had to check this Watts dude out. I wondered if as a kid, the peers Watts played baseball with and I am certain he played baseball because who's named Allen who didn't play baseball. Did the other players joke, "Hey, who's on first? Watts on second??!" If that never happened, I apologize. I work with a man named Dick Wadd - no joke. Short story long, I am engrossed in The Book, incredible writing. Still waiting for my signed copy. The only difference between waits and watts is the "I".

Truth be told, I haven't gotten past the dedication page, but as one writer to another, has that ever sounded right to you. I've spent more time thinking about the one sentence " dead"-ication page then the first and last lines of every book I've published.

I have confidence from my son so I gave you only five stars. I tried for 9 but don't want to be banned again. My son reassured me all the stars in the sky mean way more to you than any trolls and weirdos 'opinions on Amazon. No, he isn't stalking...umm, meant talking about me.

Back to the book, The Book, a bit cliched title but you are apparently alowed this sort of outlandsish obviousness because that is who you are. Beats The Bible - that just sounds like a baby titled it at 3 months old and maybe Jesus did, but that whole story is getting a bit old, don't you agree?

You need to be the new Gates, the new Shakespeare, Madonna, JLO, the author who wrote the pulitzer Prize winning documentary, "Watts his Name?" Run in 2024, Watts!/West! ticket. I will have to cover my face - perhaps a Burka but I will help you. I may actually vote if I get a stay by 2024.

Well, enough about me. My son, Matt, is your biggest fan, besides me. Seriously, Mr. Watts, you have a following in northern New Jersey, of all places! We don't even have full sets of teeth. In fact, you should do a pod or a show in every state -your name was made for it - Watt's in New Jersey, Watt's in Tennessee? etc. It's endless, and I can be your scribe- especially when we travel business class to Paris! Did I mention I'm a "writer" - as oposed to a lefter, but I can learn to give up the arm rest and the window seat - jeez. Let's take the book route first, Then the Oscars. Just change the cover.

NIce meeting you. My books are listed under Elizabeth Hoban (non-fiction) and LIz Hoban.(fiction) I'll give you some free advise (non-fiction) If I don't hear from you in the next ten years, there will be consequences. Yeah!! Watts in Burma? What's in the Arctic? I do want to know? Like the "click click" languge my son says is so wrong but when I say it - there is no question whom I'm referring to. You know the click click language? If not, we are no longer business partners. Let's sart with Watts in Walla Walla? I'll be your straight woman, or not. Personal Assistant pays better anyway. x

If you've read this far then the enire northern NJ fan base is shot to hell. My son may need to move out.

So all the best, you can call me Bette if I call you Al? No, okay,
Izzy Hoban

c
5.0 out of 5 stars Beautiful "children's" book for adults
Reviewed in the United States on December 8, 2020
Verified Purchase
I love Alan Watts! I love the illustrator. I bought this with the intention of possibly giving it away as a gift, (to justify the millionth book I bought this month) but the illustrations were so beautiful and the story so sweet, I decided to gift it to myself. Definitely a good reminder to be more in the moment and to have fun doing it.
Read more
8 people found this helpful
Helpful
Report abuse

Jason Bunting
4.0 out of 5 stars Nice Idea
Reviewed in the United States on December 28, 2021
Verified Purchase
Was expecting better, but wasn't surprised. I mean, Watts is Watts, after all, but a book geared towards kids shouldn't be this wordy. Instead of elegant metaphors, it feels clunky and better suited to a young teenager. Maybe children's books in Alan's day were like this, but... Oh well, still nice to have, as the illustrations are very well done.
Read more
Helpful
Report abuse

Dylan Ozmore
5.0 out of 5 stars Beautiful
Reviewed in the United States on July 15, 2020
Verified Purchase
Wow. What beautiful art and story. Such a gift for this to be published newly. Thank you!
Read more

Dylan Ozmore
5.0 out of 5 stars Beautiful
Reviewed in the United States on July 15, 2020
Wow. What beautiful art and story. Such a gift for this to be published newly. Thank you!
Images in this review

Brian Jacobson
5.0 out of 5 stars Great book, but language is a bit advanced.
Reviewed in the United States on April 23, 2022
Verified Purchase
I LOVE Alan Watts. I bought this book for 4 year old. He likes the book, however, I feel some of the words and phases are a bit over his skill set. Either way, he loves the story of the fish!
Read more
Helpful
Report abuse

Cathe Kiler
2.0 out of 5 stars Not a young child’s picture book.
Reviewed in the United States on September 24, 2020
Verified Purchase
Language too sophisticated.
Bought as gift for young child.

Figleaf
5.0 out of 5 stars A book for ALL ages
Reviewed in the United States on May 6, 2021
Verified Purchase
The tale informs, while the enchanting art entertains.
Read more
2 people found this helpful
Helpful
Report abuse
See all reviews

Gabriele Stutz
5.0 out of 5 stars Lovely picture book, deep as the sea!
Reviewed in the United Kingdom on February 7, 2021
Verified Purchase
I love the 'simple' story with so much depth, had to chuckle throughout at the wisdom revealed! Beautiful illustration as well. Perfection.
Read more
Report abuse

hendrix
5.0 out of 5 stars Love it
Reviewed in the United Kingdom on April 13, 2021
Verified Purchase
I know this is a children’s book. And I bought it Knowing full well it was. And at the age of 39 I can say that I have learnt so much from this little story that I am not ashamed to say I found such learning in a children’s book.
Read more
One person found this helpful
Report abuse

Amazon Customer
5.0 out of 5 stars What a Wonderful little book!!!
Reviewed in Canada on November 10, 2021
Verified Purchase
A great story, told by a great man. A wonderful, feel good book, to read to any child. The illustrations are fun and captivating. Nicely done!
Read more
Report abuse

Adam
5.0 out of 5 stars The legend
Reviewed in Canada on September 11, 2021
Verified Purchase
Get the kids started young in understanding self and environment
Read more
Report abuse

Amazon Customer
1.0 out of 5 stars Shipper could be a little more careful with quality assurance :)
Reviewed in Canada on December 18, 2020
Verified Purchase
Unfortunately arrived with a torn front cover, I usually wouldn’t mind but it’s a picture book and was meant as a gift. Other than that the delivery was prompt and great!
Read more
Report abuse
See all reviews