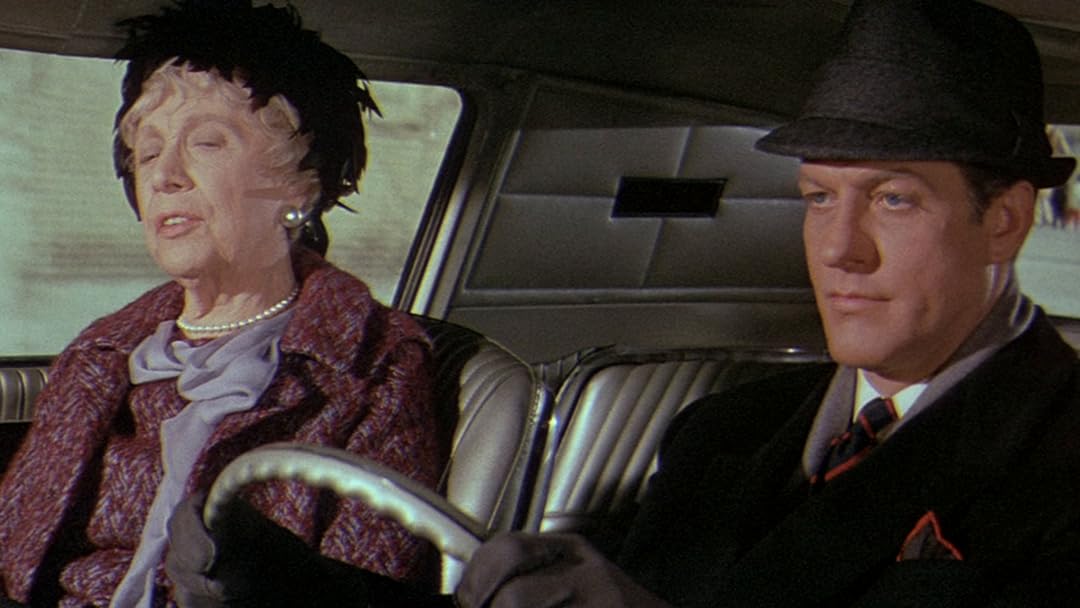 J LewisReviewed in the United States on May 30, 2021
4.0 out of 5 stars
Remember, this is a product of the time it was shown.
Verified purchase
Saw this first when it originally came out in the 60s at the local theater. It was a hoot as I remember it, a comedic 'caper' flick that had all the bells and whistles to have a no consequences ending for the characters. Seen with that 60s mindset, no worries, right?

Now it's the 21st century, and a lot of water flows under the bridge. Ideals and attitudes change as time and experience pile up.

NOW it's not so funny to defraud insurance companies and large retailers regardless of the motive. Sure isn't great fun to barricade the doors to a building, penning people in. Throwing down objects that cause falls and stampedes in the mob you've built up for your caper. A mob that HAD to have injuries from the violence of those falls.

It's shocking now to see Fitzwilly's group laughing and sipping champagne after their final robbery, without a care in the world.

too_old_to_be_so_indieReviewed in the United States on May 18, 2021
5.0 out of 5 stars
Barbara Feldon & Dick Van Dyke make for a fun movie
Verified purchase
I've read criticisms here about the theft-based premise of the movie, but it doesn't bother me... the movie feels very much of its era and it's light-hearted with fun performances from Dick Van Dyke and Barbara Feldon (in one of her few movie roles currently available online). Suspend your disbelief and just enjoy!
9 people found this helpful

TechnologistReviewed in the United States on February 26, 2020
1.0 out of 5 stars
What a disappointment
Verified purchase
I now understand Dick Van Dyke's portrayal in Night at the Museum. I did not care for him in that part but it grew on me where it was ok eventually. Here, he is so happy about his defrauding people to keep a rich lady happy since her husband left her nothing. I think the plot had some possibilities but it did not come off very well. If this was a comedy it failed. If it was a drama it failed. Nothing about the movie plot made any real impact one way or the other. I was wondering how I had missed this movie all these years and now I know why, it is dull. Then add to it that both Dick Van Dyke and Barbara Feldon are playing parts that are opposite of the kind of characters that made them famous, you have a disaster on your hands. The last half hour trys to build to a successful ending but doesnt make it. It too is weak and unsatisfying.
8 people found this helpful

John WernerReviewed in the United States on June 12, 2022
4.0 out of 5 stars
Dick Van Dyke's Charisma & Great Cast Elevates This Caper Comedy
Verified purchase
This comedy revolves around a lovable rogue butler played by Dick Van Dyke. I think I was about nine or so when I saw it in the sixties. I thought it was great though admittedly I was immature. I'm 62 now and I saw it was on Amazon Prime so why not revisit my childhood. Well, it's still great, although in a more modest way. Van Dyke is great as the central character and his would-be foil/romantic interest of Barbara Feldon provides a smart chemistry. You might say the secret weapon is the utterly fantastic supporting cast. It's admittedly by today's standards a bit of fluff, but what an entertaining fluff it is I say. The film is in fine form with some film grain and natural well-defined colors. It's definitely the type of film that simply isn't done anymore and as such a sweeter side of the sixties though I'm sure some would point out it makes light of swindling and such (I'll leave it at that). It's just a decent spoof comedy with a great performances by all.

Mike SuchcickiReviewed in the United States on December 19, 2016
5.0 out of 5 stars
Still a favorite after many years
Verified purchase
This has been a favorite movie of mine since childhood. I was a Navy brat and often I would be sent, with my brothers and sisters, to the base movie theater just to get me out of my parents' hair. The movie one Saturday was "Fitzwilly." I had no idea what it was about, only that it starred Dick Van Dyke and Barbara Feldon, who I knew from their TV shows. The movie captured my heart from the opening scenes. As movies at the base theater were only a dime in those days, I dug into my piggy bank and went back to see it several more times. (I used to do that sort of thing as a kid.)

I rediscovered the movie in adulthood and have added it to my holiday movie lineup. It's still so much fun to watch, as Van Dyke leads his happy-and-willing staff of butlers, footmen, housekeepers and cooks through various capers as con men and thieves.
17 people found this helpful

Bobbi DazzleReviewed in the United States on April 25, 2021
3.0 out of 5 stars
Great actors with a weak script
Verified purchase
***Spoiler Alert!!!**
I absolutely love Dick Van Dyke; our family grew up watching the Dick Van Dyke Show religiously (I was born in 1990!) It's a little hard to believe his character in this movie as he generally plays "the good guy." I love Barbara Feldon too, she is so beautiful and is a wonderful actress. The movie was entertaining and amusing up until about 3/4ths of the way through, when Barbara's character discovered the secret stealing, and she wasn't even upset, just hugging and kissing him and asking him to stop stealing for when they get married and have kids. Ummm, that TOTALLY lost me...it really didn't seem to fit her character and I had to turn it off because I just couldn't take the story seriously anymore!!! So, wonderful actors with a weak script. Still, I enjoyed the ambiance and style of the movie!
2 people found this helpful

Barbara Feldon is adorably sexy, Dick Van Dyke is an understated suave, and Dame Edith and the other character actors employed in the movie all do a professional job propping up an absurd storyline. John McGiver is notably quirky even though the role seems as if another actor would have been better suited for its requirements.

All in all, it's a light comedy in the 60's style. Nothing remarkable, but it's pleasant entertainment.
11 people found this helpful

worstfilmsReviewed in the United States on October 25, 2015
4.0 out of 5 stars
Picture quality and packaging are good
Verified purchase
This is an absolutely delightful film. Don't be scared off by the "DVD-R media" thing. The picture quality is good and the DVD comes in a real case with real artwork and a professional, though rather generic looking label. What it DOESN'T have is an on-screen DVD menu, subtitles (much needed), specific chapter stops at key scenes, or special features of any kind. Instead, the chapter stops are set every 5 minutes. For what's missing in usual DVD perks I would think the price would be lower, but you will be delighted that this otherwise out of print film is finally being made available and should get it while you can. You should not let the DVD-R media thing scare you away from buying this movie. If you loved this movie as a kid (like me) it holds up very well all of these decades later. The film is in beautiful widescreen with vibrant colors and I didn't notice any scratches or splices in the presentation. The sound is mono. But be forewarned: DVD–R discs are fragile and not as durable as regular DVD discs. They seem to attract scratches and fingerprints from out of nowhere. The disc should be in its case at all times when it is not in the DVD player. Don't leave the DVD-R disc out or put things on top of it or it will become scratched or scuffed up.
16 people found this helpful
See all reviews
Back to top
Get to Know Us
Make Money with Us
Amazon Payment Products
Let Us Help You
EnglishChoose a language for shopping. United StatesChoose a country/region for shopping.
© 1996-2022, Amazon.com, Inc. or its affiliates