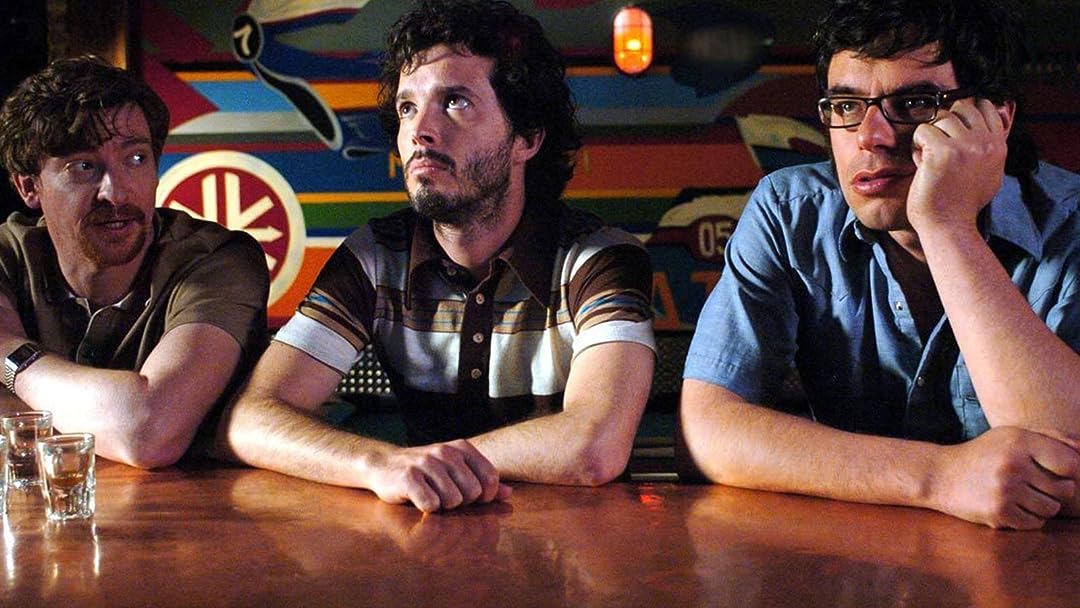 Flight of the Conchords

MarisaReviewed in the United States on September 23, 2016
5.0 out of 5 stars
Bret McKenzie is my spirit animal...
Verified purchase
This is by and large, one of the greatest shows to ever grace humanity. For me, it ranks in my interchangeable Top 3 Greatest Shows of All Time, along with the original Twilight Zone series and Game of Thrones. These fellas are comedic and musical geniuses. I have seen them live as well, and they are even better in person. Whenever I'm feeling down or my heart seems to be in a bad place, I watch Flight of the Conchords and my spirits are instantly lifted. Never fails. The comedy is different than what most Americans are used to, I suppose. Nothing very in-your-face or over-the-top. Just mainly dry, absurdist humor. It's crazy silly, but at the same time intelligent. I love everything about it. Except for Mel's Dreams song. Song was good, her performance, not so much. It's the only part I ever fast forward past.

I love these guys (and Murray). I wish they would have continued the series, but I understand why they decided to call it quits, and I love them for that, too. They are still doing great things, both together and as individuals. I suggest you check out what they've been up to; you won't be disappointed. I can watch any episode a million times and it never gets stale. The Bowie episode is easily my favorite. There is no reason this show should be rated anything below 5 stars...

Scott TurnerReviewed in the United States on August 14, 2013
5.0 out of 5 stars
Great series, ended too soon after two seasons, but definitely worth a binge viewing session
Verified purchase
Flight of the Conchords was completely unexpected. The series tells the story of Bret and Jemaine, two musicians from New Zealand trying to make it in New York. They are not very successful.

Unlike the case in most sitcoms, they live in an apartment that appears socioeconomically appropriate for two struggling musicians. They are (poorly) managed by a fellow Kiwi whose day job is at the New Zealand embassy.

The series mixes in magical realism and musical interludes, with Bret, Jemaine, and other characters breaking out into plot-related songs and scenarios. The songs all have a humorous bent, and are exquisitely well-done.

To say that we love this show would be an understatement. To put it into perspective, I typically do not like musicals, and my favorite musical is 'The Blues Brothers'. However, I love Flight of the Conchords. The two leads are engaging and believable, the writing is razor sharp, and the show hit the ground running, and is enjoyable from the first episode of the first season to the last episode of the second season.

Bret and Jemaine pulled the plug on any remaining seasons, and given the amount of creativity poured into the first two I can understand them wanting to take a break before they ran out of steam. I hope they find a way to come back for more, but in the interim I highly recommend this series.

KateReviewed in the United States on March 18, 2016
5.0 out of 5 stars
Hilarious show
Verified purchase
I just discovered 'Flight of the Concords' in January 2016 (almost a decade after it first aired). It is seriously one of the funniest shows I have ever seen. Bret and Jemaine act like clueless 15 year old boys trying to navigate their way through the big bad city. Despite being on HBO, the show has a sort of innocence about it. They rarely (if ever) swear, and they basically act like teenagers in their quests to get girlfriends and grow their fan base (which consists of one person). It's really funny! I wish I discovered them so much sooner. If you like self-deprecating humor, I highly recommend Flight of the Concords.
7 people found this helpful

Robert I. HedgesReviewed in the United States on November 25, 2008
4.0 out of 5 stars
"She's Got Two Jobs...She's A Pastry Chef And A Sniper."
Verified purchase
"Flight of the Conchords" is a quirky, deadpan HBO series about a pair of New Zealanders, Bret McKenzie and Jemaine Clement, trying to break into the New York music scene. The duo is more funky than any folk singers have ever been, and find themselves in a variety of Spinal Tap-esque situations involving the band, their one fan, Mel, and their incompetent manager, Murray.

The humor here is very dry and delivered in an extremely deadpan manner, so fans of broadbrush or slapstick comedy may not find this to their tastes. People who like wry and intelligent humor will love it. I was especially amused by the episode where the guys were discriminated against by a fruit cart owner because they are New Zealanders ("I don't want our customers complaining that our fruit tastes like New Zealanders.") It couldn't have been resolved better than when the vendor discovers that he was confusing Australians and New Zealanders, ultimately befriending the guys in a horrible case of mistaken identity. Another favorite was the episode where Bret was haunted by visions of David Bowie in his sleep with hilarious results, and the final episode featuring a guest spot by the wonderful Demetri Martin.

Each episode features a couple of short music videos, all of which are over-the-top funny, and are the antithesis of conventional musical productions (thank goodness). The DVD set is well worth owning, but a major complaint is the total absence of extras in a series this recent. If you like offbeat, bizarre comedy, "Flight of the Conchords" is well worth checking out.
4 people found this helpful

L. MurrayReviewed in the United States on December 29, 2012
5.0 out of 5 stars
One of the most clever, hilarious television shows ever made!
Verified purchase
I am so glad I happened to hear the NPR interview with these guys about the show before it debuted on HBO. Although the first episode was a little iffy, I stuck with it, and it was SO worth it! This is tears-in-your-eyes, pee-in-your-pants funny. The second season wasn't quite as great, though it too has some really funny moments.

If you love Season 1, you might want to get "Eagle Vs. Shark" before you order Season 2. Jemaine Clement is perfect in it. You can see his potential to become an actor of the calibre of Jim Carrey or Steve Carell -- someone who can move from doing quality humor to taking on heartbreakingly dramatic roles. I hope we get to see more of him.
2 people found this helpful

WMD55Reviewed in the United States on April 20, 2015
5.0 out of 5 stars
Fly Air New Zealand!
Verified purchase
Purely hilarious, offbeat and sly. I love the series, but realized I hadn't seen the first set yet, so I'm delving into that one. The NZ accents alone are worth it--I think they could recite recipes and still be funny. The subtle and not so subtle digs at Australia ("Did she steal your wallet") are also funny. This is very dry humor that doesn't always have an obvious punchline, so if you like your comedy broad, this is not the series for you. But if you enjoy dry humor, references to all kinds of pop culture heights and follies, plus a big dose of self-deprecation, I highly recommend Conchords.
3 people found this helpful

jungleboyReviewed in the United States on February 26, 2008
4.0 out of 5 stars
Amazing
Verified purchase
Like Arrested Development, this simply a great show that is grossly underrated. The show takes place in NYC with them playing dumbed downed versions of themselves and the adventures they have in NYC trying to break into the music scene with their inept manager, Murray, and their one obsessive fan, Mel. Flight of the Conchords however, are more of, you either love it to death, or you don't get it. As the former I think this is one of the most funny shows on last year, and while I hear they are signed to do a second season I sure hope it happens, though sadly I can't see the show lasting longer than three seasons. However, if you have seen any of their act, via, YouTube, or whatever, the show is like that, but 10x better. All of the episodes are written with the songs in mind and every episode they will leave a situation related to a song and break into the song, which is even more funny in a visual context. The downside of this two disk set is the complete lack of bonus materials of any kind, including their songs as just audio files, or any commentary or interviews, which in my opinion would have made this a 5 star product. Most people buying this I assume would already be fans of the show, and would probably like the additional bonus of extra features, however this is an amazing show, and all 12 episodes over two disks are excellent. I strongly recommend this to anyone with an open mind and a love of the absurd.
One person found this helpful

R. BerteigReviewed in the United States on May 23, 2008
5.0 out of 5 stars
Wonderful show but where's the extras?
Verified purchase
My wife and I came across this strangely addicting show by happenstance sometime after the series ended and before the DVD became available. We eagerly awaited delivery of the DVD set with interest piqued by the abundant clips of their videos to be found in the wild, and boosted further by locating CDs of the guys from abroad.

When it finally arrived, the show was everything we hoped for, and more.

However, this DVD set contains only the show, presumably cut just about as it originally aired. What it is missing is any sort of bonus or extra material. Even a gallery of production stills would be welcome. Nearly every other TV series set I've come across has at least one episode with an interesting commentary track, or a blooper reel, or at least one behind the scenes documentary.

Despite that urge to see more, I still can't bring myself to rate the set at anything other than all five stars.
2 people found this helpful
See all reviews
Back to top
Get to Know Us
Make Money with Us
Amazon Payment Products
Let Us Help You
EnglishChoose a language for shopping. United StatesChoose a country/region for shopping.
© 1996-2022, Amazon.com, Inc. or its affiliates