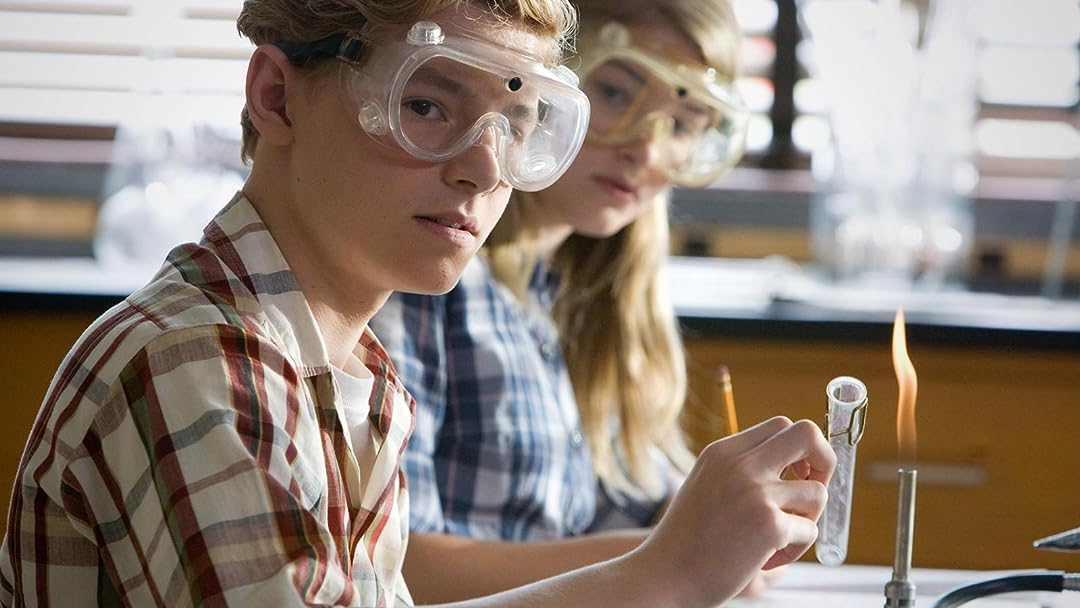 (4,124)
1 h 29 min2010X-RayPG
When Juli meets Bryce in the second grade, she knows it's true love. After spending six years trying to convince Bryce the same, she's ready to give up - until he starts to reconsider.

maureen coelhoReviewed in the United States on July 1, 2020
5.0 out of 5 stars
fall in love again
Verified purchase
The book and movie are very similar. The book has more details especially at the neighborhood dinner. I liked the book better than the movie. The movie is set back in the 1950's. I didn't take note to that when I read the book. I read the book first. The DVD has so many subtle signs that it takes place over 70 years ago. The female character is a strong, independent woman.
Are you passionate about a sport? Sometimes your desire to compete in one sport can lead you into enjoying another sport. This Young Adult fictional story is overflowing with action, friendship, bullying, family dynamics, positive role models, character traits, and natural talent in a sport.

Ghost, Sunny, Lu, and Patina are four young, diverse teenagers with natural talent and a desire to improve on the track. Ghost a.k.a. Castle Cranshaw, the main character in this fast paced story is passionate about knowing specific World Records and possibly setting one himself. He enjoys watching and playing basketball. As a typical teen, he is not eager to go home, and hangs out around town and at the track. One day, he walks up to the starting line and runs with the track team. The coach is impressed and encourages Ghost to try out for the team. Ghost thinks running might help him get better at basketball so he sticks with it. He runs in his old, no name sneakers and hopes to have new, shiny track shoes like his teammates.

Ghost is a likable character even though his life is in chaos and he cannot see a way out of constant punishment. He makes several irresponsible mistakes that become life lessons. Will these numerous mistakes prevent him from running in the big race at school? He hopes to run in the important race with an audience including his mother, aunt and cousin. He has not seen his father in years because he is in jail for domestic abuse. Ghost and his Mother ran from the abuse and into the life of Mr. Charles, a store owner and neighbor who teaches Ghost about being a hardworking citizen. Ghost is running at school from his many fights and mishaps with the school bully. He is running around town, running from his problems, avoiding going home. Luckily for Ghost, he has two strong, positive, male role models in his life who help teach him how to become a respectful young man, and how he can make better choices for his future. The first role model is Mr. Charles who helps hid Ghost and his mother from the abusive father. The second is his track coach, Coach Brody who helps him learn life lessons so he can become a respectful person. Coach Brody shares with Ghost that he too grew up in an impoverished neighborhood but he didn’t let it define him. He worked hard and made a good life for himself and his family. Coach Brody encourages Ghost to make good choices so he can be proud of himself.

This encouraging story is appropriate for young children ages 9 and up. I give this book 4 out of 4 stars. The part I liked the most was the positive role models that entered Ghost’s life and helped teach him to make better decisions. I liked the part when the coach took the new track members to dinner for team bonding. I look forward to reading the other three books in the series including Sunny, Patina, and Lu.

OneTasteReviewed in the United States on April 30, 2018
4.0 out of 5 stars
Touching!
Verified purchase
After searching through the vast Amazon Video selection, watching various trailers, for almost half an hour, one reviewer's words sealed the deal for me. I decided on this movie because I absolutely loved "The Wonder Years." The reviewer said, "if you liked The Wonder Years, you will love this movie, because it's even better." Sold! I clicked on the purchase button. I am so glad I did!

I don't know why, but the little girl really touched my heart and I felt my eyes start to burn and well up. Her acting was amazing! There was this scene where her mom and dad began to argue at the kitchen table. The little girl's facial expressions, the way she would look back and forth. The tone of her voice. It made it all so genuine! The mirror neurons in my brain bought it! It was as if she was really feeling the tension. Was really sorry for igniting the argument.

The only one who, in my view, didn't do such a good acting job, was the little boy's father. Not just because he was a royal jerk, but there was just something that didn't flow naturally in the way he played his part. Another reviewer was also critical of this personage, but for different reasons. That other reviewer had read the book version. Apparently the actor wasn't a match to the book depicted character. My push-back was more with his acting. And that is the reason that I didn't give the movie a perfect rating.

Everything else about this movie was perfect. The little girl was so easy to like. And I was forced to think of all the times when I downplayed a wonderful human being, simply because she wasn't cool, the most beautiful, or because of what others might think if I took her seriously. Fortunately, age matures us, and we learn to see, as the little girl's father said, "the entire scene." Not just a ray of the sun, alone. Not just a tree, alone. But the whole scene. In other words, not just one part of the person, but the whole person, is what matters.

This is a feel good movie that tugs powerfully at the heart. The plot is one that any human, by virtue of being human, will be able to easily identify with. Therefore you cannot go wrong with renting it.
23 people found this helpful

Todd SmithReviewed in the United States on April 3, 2020
1.0 out of 5 stars
The Ultimate Movie Review! - (...) - @tss5078
Verified purchase
Critics have called Flipped, "A true gem", & "an instant classic", so I have to ask, what were they smoking when they watched this movie? The story follows Bryce Loski (Callan McAuliffe) who has just moved to a new neighborhood with his family. Before he's even gone into the house his new neighbor, Juli Baker (Madeline Carroll) has come over to say hi, and for her it's love at first sight. Bryce, being all of eight years old, finds Juli annoying, but that doesn't stop her from stalking him all the way to high school. Will Bryce always find her annoying or will he eventually feel the same way about her? Well, I think the title of the film is a huge spoiler in and of itself, but that's besides the point. The entire film follows their interactions together, first told from his point of view, and then again from her point of view, making the whole thing very repetitive. The film offers nothing else besides the interactions of these two kids, no side stories, no friends, and even limited family interactions, it's literally just one meeting between Bryce and Juli after another. This is a film by Rob Reiner, the Director of Stand By Me, The Princess Bride, Spinal Tap, and countless other great films! I realize that not everything is going to be a home run, but couldn't he see how boring this movie was? Flipped is slow, repetitive, and even the damn title is a spoiler. This is most definitely one you can skip.
9 people found this helpful

YoMamaReviewed in the United States on August 22, 2021
5.0 out of 5 stars
Nostalgic with a great Soundtrack
Verified purchase
I first saw this movie when it was released in 2010 and then again tonight. As a child of the 50s and 60s, it was a welcome trip down memory lane, a sweet - and sometimes painful - reminder of growing up then. I loved the pop cultural references and music, as well as the nuanced commentary on income disparity, family dynamics, and the growing pains, first crushes, and strength of character exhibited, especially by Juli. It’s a great family film and a pleasant reminder of those times. If I see Rob Reiner’s name attached to a movie, I know I will not be disappointed.
One person found this helpful

SactoTKReviewed in the United States on December 14, 2017
5.0 out of 5 stars
Like Wonder Years, Only Better.
Verified purchase
The star of the movie is definitely the girl, not the boy. And it's not really about the flipped puppy love story. It's about the sassy girl and her spirit. Just listen to her monologue talking about Uncle Daniel or the Sycamore tree. If you liked Wonder Years, you'll like this twice as much.
16 people found this helpful

BebeReviewed in the United States on October 31, 2020
5.0 out of 5 stars
Just love this Movie.
Verified purchase
I am definitely a sappy female and I just love this movie. There is nothing better than seeing how females and males think and the truth about how both gender's think. I can watch this over and over. Just love it and even though you have watched it time and time again and know the ending it keeps you on your toes. It is a comical first love kind of movie.
4 people found this helpful

Girlie GirlReviewed in the United States on September 18, 2021
1.0 out of 5 stars
Not accurate for the time period
Verified purchase
I wanted to like this movie, but there were too many parts of this film that didn't match the reality of the era. It really bugged me, like the girl calling the grandpa by his first name and the teenage daughter inviting the boys up to her room in front of the whole family -- including grandpa -- not even batting an eyelid. That would have never happened back in those days. Then the fact that the father of the boy was made to look like some kind of bigot. It wasn't believable. Seem too contrived. Just didn't do it for me.

Albert L. NelmsReviewed in the United States on July 4, 2020
5.0 out of 5 stars
Fun Movie About Growing Up
Verified purchase
If you liked the TV show The Wonder Years, you will like this movie. Juli meets Bryce in second grade and thinks he is the love of her life. Bryce doesn’t feel the same and holds he off for 6 years. Juli finally realizes Bryce might not be the love of her life. This happens at the same time Bryce finally notices Juli. Will they become boyfriend and girlfriend? You’ll have watch the movie to find out.
3 people found this helpful
See all reviews
Back to top
Get to Know Us
Make Money with Us
Amazon Payment Products
Let Us Help You
EnglishChoose a language for shopping. United StatesChoose a country/region for shopping.
© 1996-2022, Amazon.com, Inc. or its affiliates