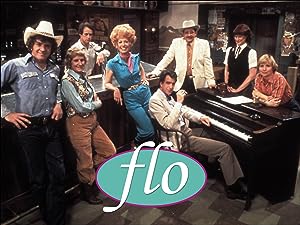 (111)
5.71980ALL
She's feisty, flirtatious and freewheeling. With a fun-loving heart bigger than the whole state of Texas--and a mouth to match--she's Florence Jean Castleberry, affectionately known to the world as Flo.

JGCReviewed in the United States on July 8, 2010
5.0 out of 5 stars
southern comfort
Verified purchase
This is a hugely underrated classic '80s sitcom that ran for 2 seasons, staring the most popular waitress in the entire history of Mel's Diner (sorry, Alice), Flo. I love Polly Holliday. Because she is hysterical and so dramatic and theatrical. She's also the type of actress that really makes others shine because she is able to light up the entire scene with her presence. In this series we really get to see her true acting talents because her character of Flo is much more developed and defined. Lucy Lee is a great foil to Polly's Flo because she is the complete and total antithesis of everything that Flo stands for. It's always so funny watching Flo tease her because she plays the perfect prude. A total of 6 eps are included in season 1. I purchased this on Amazon and watch it often through my blu-ray. These are the entire original episodes with the original theme music. With garbage on TV in twenty-ten being what it is I am surprised that more people have not recognized the ease of downloading classic TV from Amazon.
11 people found this helpful

Kindle CustomerReviewed in the United States on July 5, 2012
4.0 out of 5 stars
A nice sitcom from the early 1980's
Verified purchase
This is a nice little comedy spinoff of Alice about the former waitress Florence Jean Castleberry or "Flo". Flo moves back to Cowtown Texas where she buys an old Roadhouse bar & fixes it up. The show centers around Flo & the bar & does have its funny moments. Stars of the show are Polly Holliday, Geoffrey Lewis, Joyce Bulifant & Sudie Bond just to name a few. If you liked Flo on Alice then you'd probably enjoy seeing her on her own show.
3 people found this helpful

Debra ReynoldsReviewed in the United States on July 1, 2020
5.0 out of 5 stars
I like the old shows
Verified purchase
I just love all the old shows, I like this show but I like Alice better

Stefan HayesReviewed in the United States on April 11, 2014
4.0 out of 5 stars
Loses Something Without "Alice" Cast
Verified purchase
Although Polly Holliday is an excellent character actress: some of her appeal is lost without the cast of "Alice". Having said that, "FLO" has always been my favorite part of the "Alice" series. She does deliver great lines and her character is still intact in her own show. The characters, especially her mother, are an added plus, here, too. A great all-around sit-com that deserves a watch. Certainly beats anything on the air today.

Mark BramlettReviewed in the United States on April 24, 2008
5.0 out of 5 stars
Well, Kiss My Grits!
Verified purchase
I almost couldn't believe my eyes when I came across the short-lived series [[ASIN:B000S6DFNA Flo]] on Amazon's Unbox Videos. This series hasn't seen the light of day since it left CBS in 1981. OK, I think TV Land aired 1 episode many-a-Christmases-ago, but that doesn't really count.

After being the belle of the ball on [[ASIN:B000RVP4VC Alice]] for 5 years, Polly Holliday took the opportunity to spin her character off into her own show. The short first season was a ratings knock-out, finishing in the Nielsen Top 10 for that year. Also, airing after M*A*S*H didn't hurt.

Season Two came with a different (and competitive) time slot (Monday's at 8) and things starting sliding down hill from there. CBS didn't seem really invested enough to find "Flo" a better time slot, instead they flipped it around, back and forth. Even landing on Saturday night's for a short period of time. The death blow to any show searching for an audience, even back in the early 80's.

Cancellation came that spring for "Flo". Bringing with it an end to one of the most engaging sitcom characters to have ever existed, with her war cry "Kiss My Grits" being silenced forever.

I'm sure Holliday wanted nothing to do "Alice" again, even if an offer to return existed. It was widely rumored Linda Lavin was extremely jealous of the popularity of Holliday's "Flo" - and with good reason. Alice paled in Flo's shadow.

Holliday went on to other successes in theatre, TV and movies. But, she'll always be remembered best for playing that red-headed spitfire from Cowtown, Texas. The larger-than-life Florence Jean Castleberry.

Robert BaileyReviewed in the United States on July 21, 2013
5.0 out of 5 stars
Great funny show
Verified purchase
Never had seen the show before growing up, but I figured as good as "Flo" was in Alice, the show had to be worth watching. Finished season 1 last night and to me it's a winner.
4 people found this helpful

Renee TaylorReviewed in the United States on May 31, 2016
3.0 out of 5 stars
cute.
Verified purchase
What I expected.
See all reviews
Back to top
Get to Know Us
Make Money with Us
Amazon Payment Products
Let Us Help You
EnglishChoose a language for shopping. United StatesChoose a country/region for shopping.
© 1996-2022, Amazon.com, Inc. or its affiliates