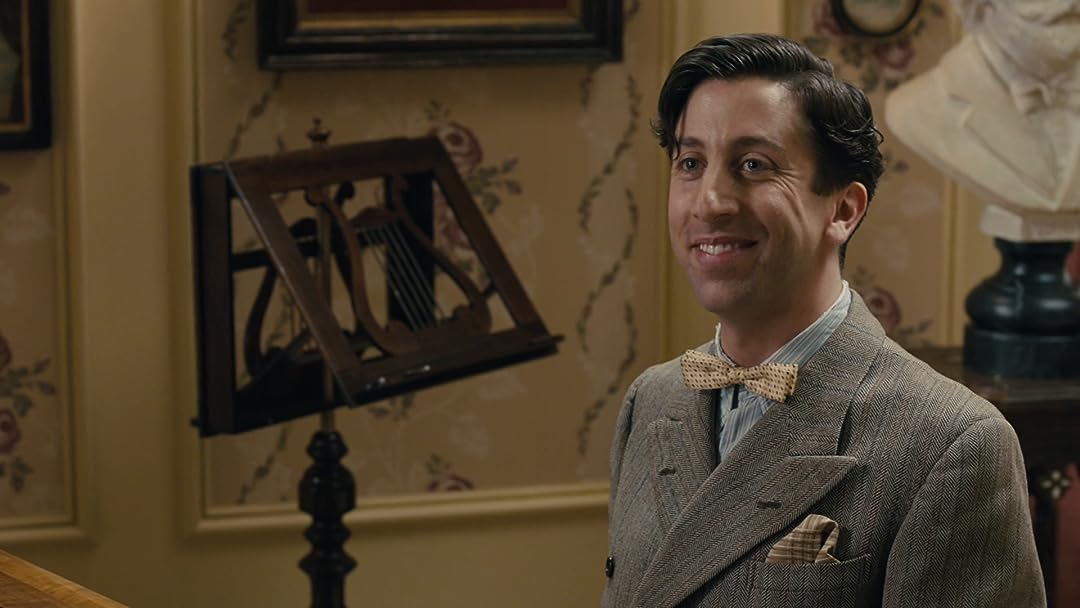 (2,852)6.81 h 50 min2016X-RayPG-13
Meryl Streep delivers a "hilarious and touching" performance as a New York socialite who dreams of becoming a great opera singer. While the voice she hears in her head is beautiful, to everyone else it's awful.

AustenparkerReviewed in the United States on September 15, 2017
5.0 out of 5 starsHeartfelt, well-acted biopic
Verified purchase
As a long time fan of opera, I'd heard a lot of buzz about this movie when it came out, but didn't get a chance to see it in theaters. How fortunate that it showed up in amazon prime! Due to the mixed reviews, I was a bit skeptical as to whether I would enjoy this or not. However, I needn't have worried - it was delightful from start to finish. It should be noted, this is not a straight-up comedy. There are comedic moments, but it's more accurately a drama, lightened by the comedic excellence of Simon Helberg. It's also not a cookie-cutter romance - there's a lot of nuance to Florence and St. Clair's relationship. Streep and Grant portray their characters with depth and emotion. I can't say enough about the chemistry between the two stars, which was intense, tender and yet also incredibly sweet and ultimately touching. I won't give away plot points, you have to watch it and judge for yourself. The film is gradually paced, it's a character study without a lot of action, which has caused some reviewers to criticize the pacing as slow. For my part, I didn't find my attention wandering at all. It's not fast-paced, sacrificing overt action for character study rarely seen in theaters. Even though Florence was self-indulgent and very cosseted by her peers and loved ones, Streep's portrayal is highly sympathetic. One reviewer compared her to Paris Hilton, which seems unfair given the struggles that the real Florence endured through her illness. As for Grant's St. Clair, he was phenomenal. Although his character could have been a one-dimensional cliche, Grant imbued his portrayal with a great deal of heart, clearly conveying St. Clair's genuine affection for Florence. A lovely, touching film without a weak performance in the lot.
47 people found this helpful
Report abuse

Eric RhinebaumReviewed in the United States on January 20, 2019
1.0 out of 5 starsSave Your 2 Hours and Read About Florence on Wiki!
Verified purchase
Instead of spending 2 hours watching a true and truly sad story, save your time and read up on Florence in Wikipedia.
Personally I find this story, of a wealthy woman who has a terrible singing voice and her husband who did everything to encourage her passion and dream to be very depressing and annoying. Hugh Grant's acting was about the only bright spot. Sorry a friend recommended this as a "beautiful love story" That kind of love, encouraging your loved one to bring themselves public humiliation is just gross! Sorry I watched the whole thing. I could have gotten a root canal.
17 people found this helpful
Report abuse

MaryReviewed in the United States on September 1, 2017
4.0 out of 5 starsI love a quirky true story
Verified purchase
It is amazing that this is a true story. It inspired me to look up the woman on which this is based and see her pics and hear her recording. The casting is great. So many subtle nuances that really make you feel for these people. They are quirky, gentile, eccentric, devoted, loyal and loving in their own way, in their own most unusual circumstances. It is actually a very pretty film in appearance with wonderful costumes and period piece decor. Was fun to see "Howard" from The Big Bang Theory in another role and he was wonderful. I didn't realize he was a musician and it's a nice perk that everyone does their own playing, 'singing' and dancing. Basically it is a different kind of movie that will keep your attention, not through action, just in it's quirkiness and in learning more about this unusual cast of characters. You come to like each one.
17 people found this helpful
Report abuse

BixReviewed in the United States on March 19, 2021
5.0 out of 5 starsShe Mattered
Verified purchase
I first learned of Florence Foster Jenkins over 50 years ago when a kindly, elderly librarian recommend the 1954 10" LP to me (She knew my sense of humour and pathos. ) I was too poor to buy records and was allowed to check them out of the local University City Public Library (c.1969). I was eleven and eager to discover everything about the world that came before.
Yes, I got a great kick out of the records and still enjoy them.
But, then I learned that Florence Foster Jenkins sold a LOT of war bonds, made and donated a LOT of money to worthy charities.
This wise librarian told me that she had seen Mme. Jenkins and was never again so entertained.
She also told me that Mme. Jenkins KNEW exactly what her audience thought, but continued the concerts because of the money she could raise for her charities.
I guess you will never know for sure.
However, I am but ONE degree of separation from Mme. Jenkins and I choose to believe that she knowingly discarded her dreams and gave her life for others.
Florence Foster Jenkins remains the highest example of courage, decency, generosity and true Christian spirit that I can describe.
When you can sell out a 2500 seat venue faster than Frank Sinatra in 1944, obtain 20 times the ticket price as Sinatra, and then give it all to worthy charities, you have become a Great Personage.
Florence Foster Jenkins was a Great Personage.
BTW: Florence Foster Jenkins was a FAR better singer than depicted in this ciné film. Her errors of pitch were a tad more subtle and far more brilliant in their humour..
Not withstanding, Ms. Streep afforded us a magic performance. Hugh Grant, blew me away with his transformation into the character.
I only wish the film spent more time describing the all the Good Florence Foster Jenkins accomplished through her rare talent.
Talent is not always what you want it to be. I suppose this is why clowns are known to cry whilst they make us laugh and feel better. —E.g., Jack Benny, off-stage, had to wear leg braces of the type that FDR wore because of the 50+ years of prat falls Mr. Benny suffered to amuse us. Mr. Benny was in constant pain. Lionel Barrymore had R.A. He eventually needed to perform in a real wheel chair, and suffered pain anguish unknown to mere mortals. Even today, steroids may initially seem to work better, but ultimately cause far more pain and a shorter life than morphia. So much for "Her Döktor" Trump.
I recommend the ciné film, "On Borrowed Time", starring Lionel Barrymore. Enjoy.
God Bless The Clowns.

Meredithe JulianoReviewed in the United States on September 24, 2017
5.0 out of 5 starsTalented Treasure
Verified purchase
I was completely bowled over by this thoroughly outstanding movie. It was both heart-warming and heart-wrenching at the same time. Totally fabulous performances by everyone. There were many scenes that had me literally roaring with laughter. Other scenes broke my heart. I never heard of this before but when I saw Meryl Streep was in it along with Hugh Grant, I just had to watch this. I recommend this to every artist who believes in their own talent. Everyone should follow their dreams as this lady did. Thank you Amazon Prime. So glad I did not miss this utter treasure.
15 people found this helpful
Report abuse

nycReviewed in the United States on November 13, 2017
4.0 out of 5 starsA Woman Who Dreamed to be a Talented Entertainer, Particularly an Opera Singer and Got Her Dream to Come True
Verified purchase
Based on a true story, Meryl Streep was fun in this movie. The character's essentric personality was such that you feel bad for her at the same time that you feel good for her. Florence Foster Jenkins was a woman with wealth inherited from her father, who has many dreams to be a talented entertainer. She has tried her hands in acting, but was inspired by opera singers to be an opera singer herself; her ultimate dream. On the one hand, her happiness of glorious reviews were always purchased by her husband without her knowledge, and on the other hand she is a genuine person who strives to reach her goals through practice and lessons. People lie to her in every way of their positive views of her talent because of her money and power, but she never really abused her money and power, so in a way you have to sympathize with her. It's not her fault that she is rich, and it's not her fault that she is gullible under the protection of her husband who has an affair behind her back. You really can't fault her for wanting to reach her dreams even though some might claim that she was able to get what she wanted because of the wealth she had, which is not available to regular folks who have dreams like hers. There was a certain charm in this movie that included humor, but also a certain sympathy for a woman who had an illness since she was 18 that doctors told her that she wouldn't live very long. Yet she lived as long as she could to carry out her dreams even though she was in a way bullied for her silliness, but protected by her loving husband and the people around her.
7 people found this helpful
Report abuse

Thinker3Reviewed in the United States on February 17, 2019
1.0 out of 5 starsJenkins' Friends Help Her Live in a Bubble--Unwatchable
Verified purchase
Only made it through 45 min of this one--and that was way too much. All the characters are horrible. Jenkins devotes her life to music even though she has not the least bit of talent for it. Because she is wealthy, her friends and assorted hangers-on perpetuate the illusion that she has talent. It is all revoltingly awful. Since Jenkins could not sing or act, it is hard to fault Streep for poor acting, but she manages to be so convincingly awful that the film is unwatchable.
8 people found this helpful
Report abuse

Jody JohnsenReviewed in the United States on March 28, 2021
1.0 out of 5 starsBad movie, poor critical review, sad story of a pathetic old woman
Verified purchase
An entire movie about a sad old woman who uses her money to live in a fantasy world is more than sad, it’s a tragedy. The movie isn’t funny. There are no interesting scenes. Some well known actors perform in it, like many other films. It’s a waste of your time. But there is one thing of value in this movie:

It shows us the clear divide between humans who live honest lives, work, support families and seek out diversion in sport and entertainment versus the artificial world of movie making and movie makers. Critics clearly see themselves as part of the movie making fantasy. They judge based on novelty and ability to lie convincingly. As this world has no basis in reality the real world principals like diversion, entertainment and amusement simply don’t matter.

In case you haven’t seen the reviews the critics loved this film. The hard working people who paid for the tickets didn’t. I have no use for the critics and this is why. How the people review a source of entertainment is far more valuable. This one is useless. Don’t waste your time.
2 people found this helpful
Report abuse
See all reviews
Back to top
Get to Know Us
Make Money with Us
Amazon Payment Products
Let Us Help You
EnglishChoose a language for shopping. United StatesChoose a country/region for shopping.
© 1996-2021, Amazon.com, Inc. or its affiliates