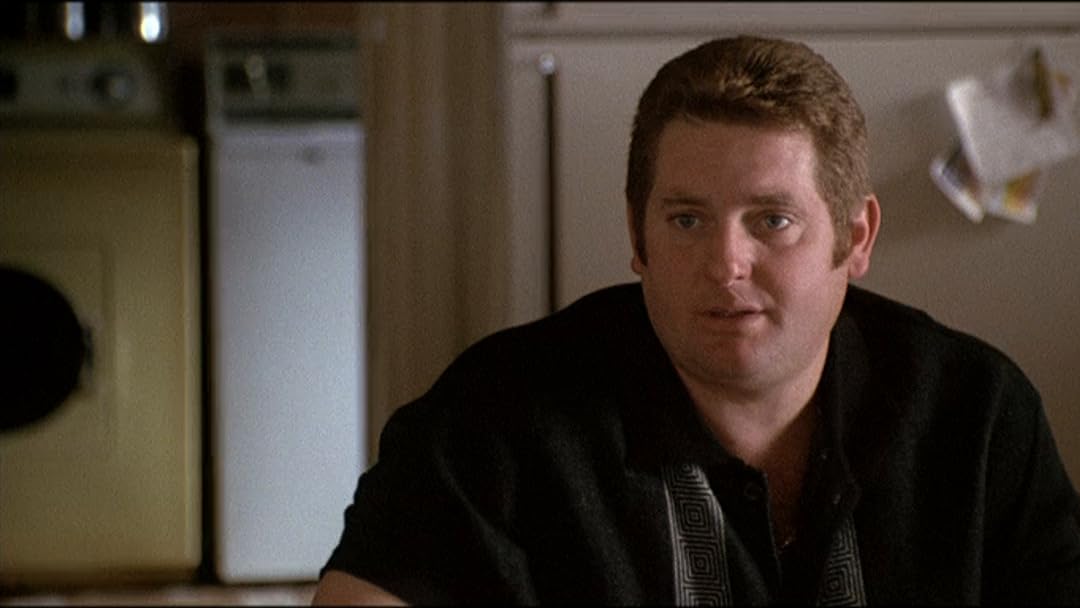 (34)1 h 44 min1999R
A seedy slice of life story of a bartender in a Pennsylvania steel town that finds his life full of characters struggling to find their own place in the world and happiness along the way.

D. LarsonReviewed in the United States on August 18, 2019
4.0 out of 5 stars
Life sliced very thin indeed
Verified purchase
A thousand or so years ago, there was a late night infomercial pitchman some of you may remember. On late-night television, he’d demonstrate the Ginsu miracle blade, a knife that could cut through a block of frozen peas like a hot knife through butter, hack a pop can in half, make razor sharp cuts through a ripe tomato, saw through a 2 X 4, and still “slice meat so thin your inlaws will never come back!” Only $9.99 and that includes a fork, a radish slicer, paring knife….

“The Florentine” is a slice of life drama that could display the Ginsu’s close carving ability. These slices of life are thin indeed, but still pretty tasty. It’s constructed of little slivers of dialog between blue collar types and neighborhood bar denizens. Small vignettes are followed by blackouts, jumping to another moment and another set of characters, and then another. Each little slice is related to the others in ways that only slowly become apparent to the viewer. It’s really quite a pretty conceit, and the subtlety is nicely brought out. It’s better than I’d expected.

Casting-wise, let’s see. We’ve got both Madsens, Michael and Virginia, playing brother and sister, appropriately enough. There’s the lesser Penn, who’s not bad as a petty criminal who's in over his head with both counterfeiting and marriage. And the surviving Belushi, who’s probably the most fun because he’s so obviously sleazy. Obvious to everyone except Luke Perry, another familiar face playing a guy who’s well-meaning but credulous to the point of stupefaction.

Jeremy Davies’ character, a man-child hilariously obtuse, is fun and a little sad. He’s a face you’ll remember from a surprisingly big filmography, everything from “Private Ryan” to “Twister”. I remember him as one of the Bennet brothers from “Justified”, where his hair-brained schemes never came to more than his hare-brained romance in “The Florentine”.

The cast is rounded out with Mary Stuart Masterson and old pro Hal Holbrook as the philosopher/barfly, a character his craggy feature work well for. A lot of talent in service of a small script, but there aren’t any bad performances. And isn’t that Tom Sizemore? Yes it is! Always good to see him. Hard to think of a movie he hasn’t been in; I remember him best for “Private Ryan” and “Blackhawk Down”. Here, he's rough but has a heart of gold, the only character who moves things along after we learn his Dark Secret.

This looks like a film of a play, and the barroom setting is indeed a little stagey. But the director did open it up with some exteriors and a nice church interior. I admit to being put off initially by the Working Class Hero opening narration, about how a dive bar is almost a holy space. I darn near bailed when the picture opened with Holbrook’s sententious maunderings about taverns and community and a place for lonely souls to….you get the idea. Sometimes a dive bar is just a dive bar, OK? No monolog required.

But the promise of all that talent kept me watching, and once I got into it, I came to appreciate the amount of craft involved. The plot is really thin; not much happens and what does happen is as much off-stage as on. But, it’s sweet and well-meaning, and even con-man Belushi is a small-time hustler who’s easily defeated. A wedding is planned, a wedding happens, money worries come and go, and at the end, things are pretty much the same as before. There’s a closing benediction from Holbrook I would as soon do without. If you haven’t got the point about the importance of the bar by now, you’re probably an unfeeling old cynic like me.

There’s almost no action, surprisingly little drinking, and characters don’t grow once defined. But, it’s a small, sweet movie with plenty of heart. If that sort of thing appeals, give “The Florentine” a try. It even warmed my crusty old heart a little. Four stars, just because I get mushy thinking about nights spent drinking at Polly's Lounge back in my home town.

MichaelGReviewed in the United States on March 31, 2021
4.0 out of 5 stars
Enjoyed it very much
Verified purchase
Really good cast, thin yet interesting plot. It looks like a play and apparently is adapted from an Off Broadway production.

There are some holes in the story (like what happened to Burt Young's mob guy and his threats of harm to a couple of the leads, they kind of disappear midway through the movie never to return) but it's still a charming slice-of-life in a dark, dreary Pennsylvania town (it was filmed in the Lehigh Valley around Allentown, Easton, and Bethlehem).

I haven't seen any mention of the musical score but it's first rate-Elvis Costello, Bob Dylan, Southside Johnny, Tom Waits, and, just when you started thinking that this would be a perfect kind of movie for a song from Bruce Springsteen, the credits are running with his 'My Beautiful Reward'
2 people found this helpful

Amazon CustomerReviewed in the United States on September 13, 2021
2.0 out of 5 stars
Good acting although because of CRAP directing/writing they are NOT PLAYING Lehigh Valley , Pa
Verified purchase
They are playing New York City, Brooklyn, maybe even Chicago ... NOT PLAYING Lehigh Valley , Pennsylvania Like or hate Rocky/Stallone He Nailed Philadelphia Italian...just NAILED IT
"Hay Yo Adrian" would only be said in Philly and it's area...I like Jim Belushi ...glad he likes to work BUT
he should have turned the role down....because he is the worst written character. Could have been a good flick.....like I said Good acting CRAP writing and directing.....If Francis Ford Coppola was not so ????erroneously celebrated.....movie would probably NEVER GOT MADE and all the awesome acting talent
would not have taken the parts....Francis Ford Coppola skateing by on past success....
DISSAPPOINTING......
I hope and assume Tom Benson and Damien Gray are mad/sad/hurt with what was done with their
writing.

mark Allen kaeppelReviewed in the United States on March 27, 2021
1.0 out of 5 stars
SLEEPY TIME
Verified purchase
Good actors gone bad, wow. Ten minutes in i wanted to stab my eyes with steak knifes, what the what..?
One person found this helpful

quietguy.Reviewed in the United States on April 9, 2021
4.0 out of 5 stars
I enjoyed this... very much
Verified purchase
Top flight actors, acting and story.

Well worth watching.
One person found this helpful

Hal OwenReviewed in the United States on May 29, 2009
4.0 out of 5 stars
Splendid cast elevates hopeful romance.
Verified purchase
Not that this film needs any help from me but allow me to say, "The Florentine" is a superb example of a movie containing at least eight character studies - all executed by splendid actors - that boggles the imagination. Take Tom Sizmore and James Belushi for example. I can't recall a film in which either actor displays more humanity, more core, more inner feelings. Sizemore's touching church scene with Michael Madsen, in which both characters must sort out some painful memories while agreeing to remain friends, is almost heartbreakingly poignant while Belushi's big swaggering sell of a character is nothing short of a tour de force. But then the whole cast simply nails scene after scene as if we are privy to a perfectly performed, (if dated,) stage play, which I understand is the origin of this film. And here is my major reservation, the all's well that ends well story line seasoned with so much salt of the earth brined away contemporary sensibilities leaving much of "The Florentine" playing as if from the 1930's complete with a Hal Holbrook stage manager-like character from Thorton Wilder's "Our Town." But neat and a bit too tidy story or otherwise, this is, (to me,) an actor's film from first to last and with that in mind, I say "The Florentine" remains a joy to watch.
3 people found this helpful

DLMReviewed in the United States on July 26, 2021
5.0 out of 5 stars
Throw back flick
Verified purchase
Was a Christmas gift for my hard to buy for husband. Over heard him talking about it and glad I found it on Amazon,

TBReviewed in the United States on April 24, 2010
5.0 out of 5 stars
Love this movie
Verified purchase
Such a great movie. It's true that this movie is not held together by a great story but more by the people that make up the story. Meaning, that it's about a small town (in PA - notice all the Yuenling) and how a group of friends remember the past, get stuck in the stuck, and in some instances move on from the past. Introduced to this movie by the sister of the director, it's been a favorite of mine for years. If you like this movie, a movie called Beautiful Girls is in the similar vein. Also had the chance to meet Matthew Ryan (through the director's sister) soon after this movie was made. Ryan's songs make up a good portion of the soundtrack. I become a big fan of his music through this movie soundtrack. His somewhat Dylanesque vocals accompany this movie perfectly.
One person found this helpful
See all reviews
Back to top
Get to Know Us
Make Money with Us
Amazon Payment Products
Let Us Help You
EnglishChoose a language for shopping. United StatesChoose a country/region for shopping.
© 1996-2021, Amazon.com, Inc. or its affiliates