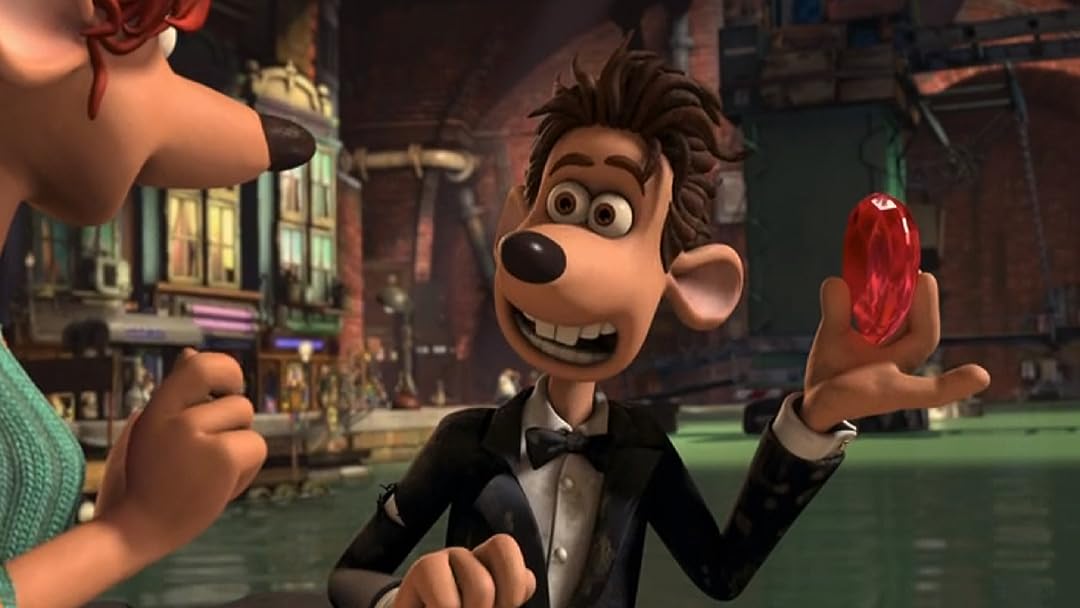 (9,860)
6.61 h 24 min2006X-RayPG
The story of an uptown rat that gets flushed down the toilet from his penthouse apartment, ending in the sewers of London, where he has to learn a whole new and different way of life.

Leah 💛Reviewed in the United States on May 31, 2018
5.0 out of 5 stars
Review based on Autistic kid watching it 2 million times
Verified purchase
If you can see this little movie as often as the parent of an Autistic, developmentally delayed child has seen it and still not hate it - it’s good. I still break into dance when Billy Idol starts playing in the background, I still laugh at Whitey & Spike & LeFrog’s ‘men’ & Rita’s family. I still find myself badly imitating the British accents while talking to my son after the movie because I know it will make him laugh. So, yeah, for those who won’t watch it every day for years, it is great!
35 people found this helpful

a.robertsReviewed in the United States on June 18, 2020
5.0 out of 5 stars
I lived this movie as a kid and still do
Verified purchase
I'm not a movie critic but I can't believe this movie "flopped", it was one of my favorite movies as a kid and it still holds up. I would have watched a part 2 back then and asked my grandma to buy it for me for Christmas on DVD and I would watch it in theaters now, my boyfriend would watch a part 2 in theaters. I would buy it I would watch it more than once. Critics who failed this movie have no taste
4 people found this helpful

Ethan AnaniaReviewed in the United States on May 7, 2020
5.0 out of 5 stars
One of my favorite Blu-Ray upgrades!
Verified purchase
When I was 7 years old in 2006, me and my mom went to see one of my childhood favorites, ‘Flushed Away’.

Now, I upgraded this film from regular DVD to high definition Blu-Ray.

This is one of the best Blu-Ray transfers that is a must-own for DreamWorks fans!

BernardReviewed in the United States on August 24, 2014
5.0 out of 5 stars
" I asked him if he liked the movie
Verified purchase
One day I heard my 5-year old grandson singing a tune called "Mr. Lonely." I was shocked because I believe that song was popular about fifty years ago. It was recorded by Bobby Vinton. When I asked him where he learned or heard that song, he told me that it was from an animated movie called "Flushed Away." I asked him if he liked the movie, and he told me that he did. And so I ordered it. I also had the song put on a CD and brought the song up on YouTube so that he could watch the entire song. I think he was surprised to see what the song was truly about. Anyway, my grandson loves the movie and it brought back memories for me as I served in Vietnam between 1965 and 1966.
18 people found this helpful

ThatSlutLondonReviewed in the United States on May 3, 2007
5.0 out of 5 stars
SURPISINGLY entertaining!
Verified purchase
While his family is away at Holiday, Roddy, the Pet Mouse, takes advantage of having the whole house to himself, taking in a movie, hanging out with the (Plastic) ladies, and enjoying his solitude. When an intruder comes in and Roddy gets Flushed down the potty, Roddy encounters what is a spitting image of Lodon, if it were built out of trash. He sets of on a journey to find his way home, and finds himself interwined in a plot to destroy this sewage London. He learns the importance of family, friednship, and must make some important choices.

I have to admit I WAS skeptical about this movie. I've never been fond of the previous Aardman efforts. The Lipless, wide mouthed toothy expressions really weirded me out, and I just nevet thought they were very funny. After seeing clips of this movie being demoed in a store, my interest grew and I rented it. and LOVED it!

As CGI films seem to go, it attempts to gear jokes to both parents and children, but unlike other movies, the adult jokes are clean enough that if the children DO get them, it won't destroy them, and even the silliest of childish jokes can get a chuckle out of a dirty minded adult (like myself). There was the occassional joke or gag that wasn't what I would call funny, but those were VERY few and VERY far between.

Funny, charming, and at times just plain silly, "Flushed Away" is a rarity nowadays]- especially amongst CGI films that seem to pop up EVERYWHERE. It's creative and EXTREMELY enjoyable! THe voice actors are TOP notch, and the characters are loveable and entertaining.

I also have to add that the slugs were DEFINITLEY the best part! Singing helium voiced versions of songs from modern to "classic" (more or less) and original songs here and there.

"D"Reviewed in the United States on January 12, 2021
1.0 out of 5 stars
False advertising!!!
Verified purchase
Everything was okay I guess. Except the one thing I needed the most wasn’t inside, and it said it was a new item. But I travel on business, so I really depend upon the digital codes. Can I exchange the 3 movies I purchased from Amazon Prime which were “Flushed Away”, “Bee Movie”and “MegaMind”? Or even get them free since it wasn’t specified? They were all DreamWorks Pictures so I know that they were supposed to have digital codes.

kristieReviewed in the United States on February 6, 2019
1.0 out of 5 stars
no sound
Verified purchase
my son was home from school sick and wanted to watch this particular movie so I rented it. there was no sound. I could not control with my controls so I assume it was an issue with the movie. I could not cancel it as it had been on for several minutes while I was trying to figure out the problem. I would like for this to be removed from my amazon card.
6 people found this helpful

Glen T. LukasikReviewed in the United States on January 7, 2016
5.0 out of 5 stars
3-year old loves it!
Verified purchase
Hard to get my son to watch new movies sometimes... All he wants to watch is Incredibles, and before that it was Cars, and before that it was Nemo. He likes a movie and will watch it until he memorizes it. And when I suggest trying a new one, he tells me that he doesn't want a new one. So I usually purchase one without telling him and just put it on... then he comes into the living room he will usually just sit down and start watching it. I will know if he likes it if when I let him pick the movie later, he picks one he watched before.... Flushed Away was one that he has picked on numerous occasions. I purchase Over the Hedge at about the same time, and he hasn't asked for that one...not even once.
5 people found this helpful
See all reviews
Back to top
Get to Know Us
Make Money with Us
Amazon Payment Products
Let Us Help You
EnglishChoose a language for shopping. United StatesChoose a country/region for shopping.
© 1996-2022, Amazon.com, Inc. or its affiliates