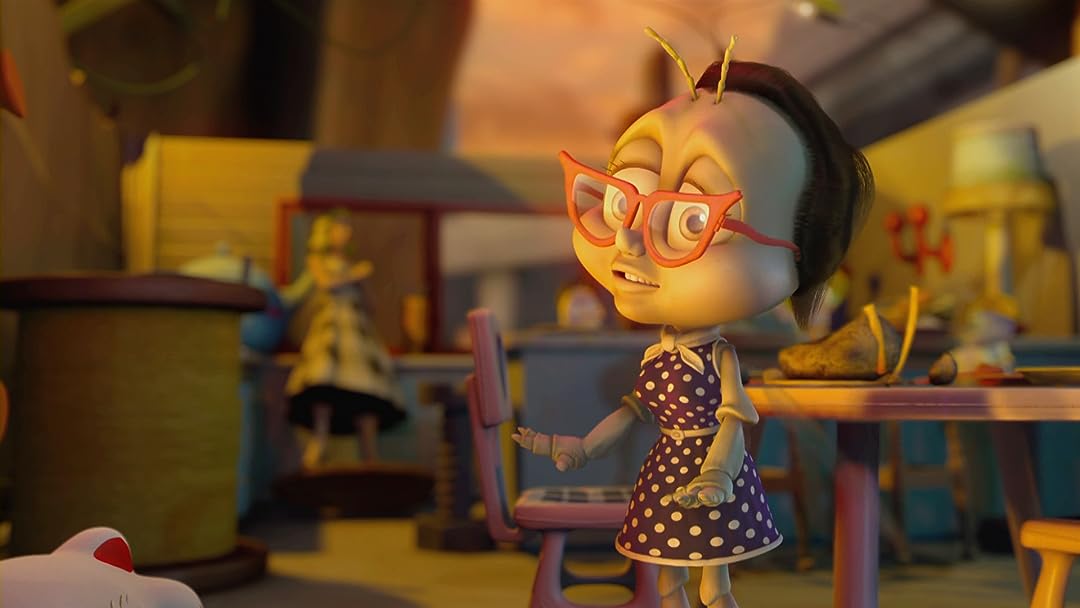 Fly Me To The Moon

(379)
4.51 h 24 min2008G
Three adventurous houseflies stow away on the Apollo 11 moon flight and are secret contributors to the mission's success. Animated fun voiced by Christopher Lloyd, Kelly Ripa and more.

Stephanie Alden BrooksReviewed in the United States on March 10, 2012
4.0 out of 5 stars
Fun DVD for kids but could have been better!
Verified purchase
I wanted to rate this funny introduction to Apollo 11 flight to the Moon DVD 5 stars. I only gave it 4 stars as I did not like the excessive amount of time to introduce the fire fly characters. The movie is educational in showing in a way that kids will understand what it is like without gravity. The animation with the blast off, astronauts and Houston Control Center and the landing on the Moon with Neal Armstrong's famous words, planting of the American Flag and the return to the beautiful blue Planet Earth were inspirational and the color was beautiful. I liked that Buzz Aldrin explained that this was fantasy. We will fast forward to skip some of this. However,I think kids will find the fire fly Mother always fainting (I thought it was silly). Kids will probably laugh at the Russian fire flies attempt to sabotage the return. I enjoyed the movie, but think it will be a little too long for my granddaughter who is 4. I do think she will like it as she likes rockets balasting off. She counted down to 10, "Blast Off" when she watched a recent launch.

Mathew PittsReviewed in the United States on November 4, 2012
4.0 out of 5 stars
Not Imax But Not That Bad
Verified purchase
I have had this movie in 2D for quite some time. I decided to buy it in 3d just to help increase my order total so I could get free shipping. I was surprised by the 3D effects. They were actually pretty good. I was a little disappointed with a bad ghosting image on some scenes, but for less than $4.00 I will not complain too much. I watched it on my 55 inch Sony, and the flies seemed to really come off the screen and hover midway between the TV and where I was sitting. This is not the latest hi tech 3D experience that you would have with a good pair of glasses, and a 3D TV, but I never expected that. It is a very good lesson for anyone who is too young to remember the mission of Apollo 11. I was pleased that I bought it. My only other complaint is that it is listed as a Blu Ray. There was a Blu Ray copy released in Europe, but not in the US. You have to read all of the descriptions of the video to see that it is a DVD. But overall I am pleased.
One person found this helpful

David D.Reviewed in the United States on February 3, 2016
5.0 out of 5 stars
My 6 yr old & I really liked the movie
Verified purchase
We watched this on Prime, so no 3d. My 6 yr old & I really liked the movie. I got caught up in it due to the movie doing an excellent job of portraying the Apollo 11 space mission. They played it through from launch to walking on the moon. The memories it brings back to those of us old enough to remember sitting in front of the 'ol b/w tv watching this. It is a great movie to teach kids about that great mission. My kid liked the flies & pretended to fly around after the movie.

Animation is good. Content is good for kids. Enjoy!

JasoncdeanReviewed in the United States on July 30, 2009
1.0 out of 5 stars
Horrible
Verified purchase
We got this movie for our little girl and hoped it would be good for adults. It was neither.

First off the animations would have been amazing had they come out 20 years ago. By today's standards they were terrible. The movement was clunky, stiff, and not fluid at all. The facial animations while a little better were not better by much.

Along with the animations, the lack of detail for the characters was just as bad and made the poor animations look that much worse. Unlike any other good cartoons like Pixar movies and Shrek, never once did I feel in awe of the picture.

To add insult to injury, the movie abused the 3D effects as much as they possibly could. It was as if each screen was intended not to tell the story or advance the plot but rather to freak out the audience using the 3D features. Not only is this lame but it absolutely ruins the movie when NOT watching it in 3D. It was almost like being on a cheap ride at a theme park at points.

Story was as bad as the rest. It was not interesting, believable, or entertaining. Now kids movies do not have to be believable but at the very least should have some shred of truth to it. Not this movie. Nor did the challenges really make sense or engage me as a viewer. I guess this movie was geared towards small children but then again my daughter hated it too.

Characters were bad too. None had any real depth and never gave you much of a reason to care about any of them.

Overall I wish I could have given it less stars. It was almost as if they said hey lets just make a movie about being 3D and then fill in the other details later. I would only recommend this movie to somebody that is in need for punishment.

BocReviewed in the United States on February 13, 2009
3.0 out of 5 stars
3-D could be better.....
Verified purchase
I found the 3-D to be good, but not *great. As one reviewer previously stated there is a problem with double imaging. There is a depth of the 3-D effect but there sre no extreme 3-d effects seen that extend beyond the tv screen. I think the home conversion was messed up because the 2 3-d images seem to be out of sync with each other. 2 films that I've seen recently with *great 3-d effects are Journey to the Center Of The Earth 3-D and Sharkboy and Lavagirl. Both dvds feature effects that extend outside the tv screen and right into the room with you, which are the hallmarks of a good 3-d viewing experience. The 3-d in Fly me to the Moon looks similar to the Polar Express 3-d dvd which seems to suffer from the same problems. Both conversions may have been done by the same company. As a story it wasn't too compelling. I don't care how cute you try to make flys, they're still nothing but maggots with wings. I found myself wishing the main charactors would get swatted or squashed, but no such luck. They survived to the end of the film, unfortunately. I give it 3 stars. The end............
2 people found this helpful

B1Reviewed in the United States on December 19, 2012
4.0 out of 5 stars
Basic Kid Flick
Verified purchase
The good:
* Background is real events - gives viewers an idea of history
* Very clean (worst language is "Oh my Lord of the Flies" and violence is really there in only two scenes)
* Very simple plot - good for young children (we watched this with a 3-year old and he understood it)
* Lovely and imaginative renderings of the flies' parallel world in the junkyard
* Buzz Aldrin makes an appearance at the end. (This was my favorite part of the movie.)

The bad:
* Sloppy production with obvious bloopers ("Authorized Personal Only" in big letters in the middle of the screen, Amelia Earhart lands in France, not Ireland)
* Very simple plot - boring for adults
* Very simple characters - calling them 2 dimensional is giving them too much credit. Every character (except maybe the astronauts) is a caricature.
* Scooter, one of the main characters, has a problem with compulsive eating. This problem comes up a lot and gets a lot of screen time. They try to play it for laughs and to make it one of the central conflicts in the movie. But the jokes are not funny and Scooter isn't struggling with the problem - it is just other people telling him he needs to eat less and focus on other things. So it is neither a good for laughs nor as a conflict.

I personally didn't enjoy the movie very much. Then, why, you ask, did I give it 4 stars? My son liked it and he is the intended audience. Additionally, there was no magic. A kid's movie with no magic and no "I think I can, I think I can" gets an automatic upgrade with me - realism requires extra work and imagination on the part of the writer. Finally the movie gives a view of an incredibly important historic event (when our species first set foot on another world) and treats it as important. I hope my son wants to grow up to be an astronaut and views the much coveted position of "rock star" as meaningless trash unworthy of his talents. This movie goes more in that direction than many others I've seen.

Richard M.Reviewed in the United States on January 12, 2022
3.0 out of 5 stars
A good 3D dvd
Verified purchase
This is apparently made to commemerate the first landing on the moon... there is high quality video here!
See all reviews
Back to top
Get to Know Us
Make Money with Us
Amazon Payment Products
Let Us Help You
EnglishChoose a language for shopping. United StatesChoose a country/region for shopping.
© 1996-2022, Amazon.com, Inc. or its affiliates