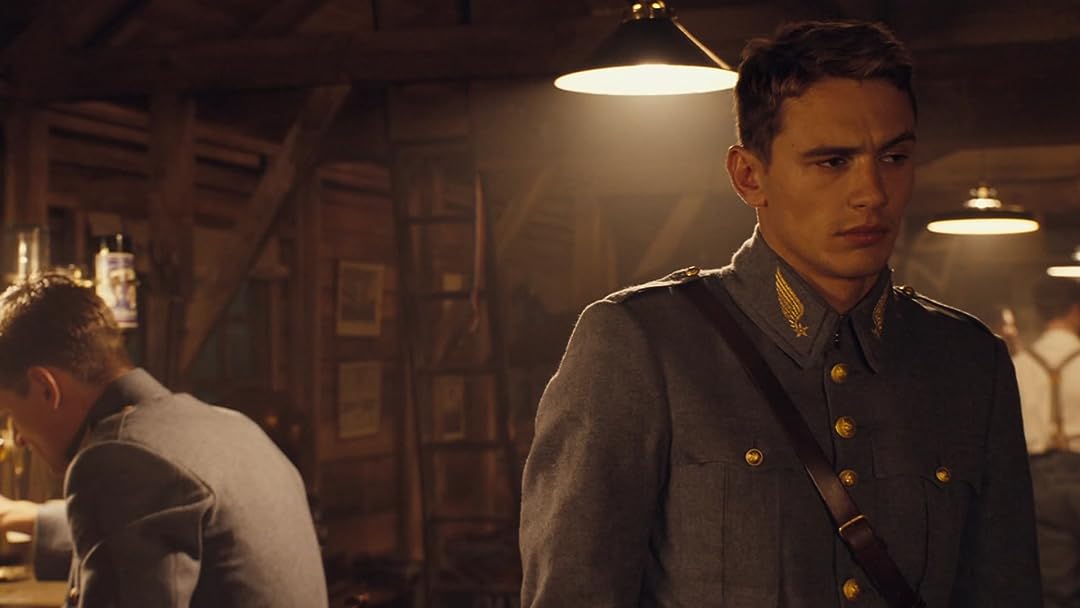 (2,867)
6.52 h 19 min2017X-RayPG-13
The adventures of the Lafayette Escadrille, young Americans who volunteered for the French military before the U.S. entered World War I, and became the country's first fighter pilots.

Book GnomeReviewed in the United States on April 17, 2021
4.0 out of 5 stars
Second Only to "The Red Baron" for Biplane Action
Verified purchase
This historical story follows the exploits of young English pilots during WWI. While the storyline is clearly fictionalized a bit and a little melodramatic, the biplane flying action is excellent, topped only (and not always) by that in "The Red Baron". In particular I found a couple circling battle scenes portrayed in "Flyboys" to be especially dramatic, highlighting an era when aces actually felt the wind on their faces.

If you are interested in this movie, then you will also want to check out:
-- The aforementioned The Red Baron, a mostly historical account of this pilot that includes the best biplane action to be found in moviedom.
-- The Blue Max, a purely fictional account that nevertheless offers great flying action (that is surprisingly good for a 1966 film) and a compelling story.
-- Aces High, the poorest of this bunch with downright bad flying action but notable in accurately capturing the despair of the short-lived German pilots at the end of WWI.

qajaqrReviewed in the United States on April 7, 2017
4.0 out of 5 stars
Like any good story..
Verified purchase
... this one has several things going on. Many of them have been detailed in these reviews, but while the technicals are important, the message is too.
The message here is the human cost of combat. What it costs to be a warrior. What they have to live with after the firefight, the battle, the war, is over. Those that have never been in a war, never seen a close brother-in-arms killed or watched one reduced to an incoherent, broken human in the fetal position that just hours ago was a fearless fighter, have no idea what war costs. How it feels to realize you've killed a human. How it feels to see a human killed. You know yourself and everyone else much better after days and weeks and months of killing and dying day and night; it grinds everyone down to who they really are. You realize things about yourself you didn't know, and if you survive, you have to live with what you've done, or didn't do. It finds the bravest, the weakest, the foolish, the most determined, the coolest under fire, the cowards, then exposes them. That's what this film is about. The brotherhood of those that have been in the fire and tempered by it, the loss of those same brothers, those that failed in the crucible of combat and how profoundly a warrior understands the price of war.
57 people found this helpful

Yee-Ron C.Reviewed in the United States on February 13, 2021
4.0 out of 5 stars
Always a diehard fan for this movie.
Verified purchase
This movie is total nostalgia! I know there are plenty of historical inaccuracies in it but it's still one film I enjoy having in the collection. Digital or not. It has action, bits of funny moments, seriousness, and romance too. Inspired from a true story kinda stretches the truth a little but it is based off of the real pilots who did volunteer to become the first pilots for America in the first World War. The story adds its own fair amount of drama to enhance the storyline but that's understandable. If you go into this film trying to pinpoint everything wrong with it, it won't be easy to enjoy. I still say it is a nice contribution to the film industry though, hands down.

ChazzReviewed in the United States on October 7, 2018
5.0 out of 5 stars
Love this movie.
Verified purchase
Ok forget about the "oh now that wasn't realistic...." nonsense. I doin't think many people watch a Jame Franco looking for it to be dead historically accurate. If you are looking for that watch a documentary on WW1 aircraft not Flyboys.
It is fun to watch. Make you laugh, makes you cry, makes you wish you owned an earlier model aircraft.... etc, etc,.
So grab some popcorn and watch away. You will enjoy it.
7 people found this helpful

RichReviewed in the United States on September 28, 2020
5.0 out of 5 stars
Flyboys--A Great Movie
Verified purchase
If you're interested in what the aerial combat was like during WWI, this movie will give you an excellent point of view. While the time line is a little off, the overall presentation is historically correct. While the characters in the movie portray some of the original pilots, the names have been changed. As in most war movies, the battle scenes are a little intense, so if you're squeamish about seeing blood, I wouldn't recommend watching this.

joeReviewed in the United States on November 1, 2018
2.0 out of 5 stars
For 9 year olds
Verified purchase
Kind of a cliche, derivative, predictable, anodyne, mess of sloppy editing. You know that moment in war movies where the maverick renegade finally grasps the importance of a higher purpose then gives somebody a stern faced, heavy eye contact, super exaggerated salute? Well imagine that for a whole movie....its been an honor serving with you.
One person found this helpful

Lana SimmsReviewed in the United States on January 6, 2022
5.0 out of 5 stars
Good movie
Verified purchase
My granddaughter was disappointed that she had watched half the movie at school and was to watch the other half the next day but was absent due to illness. So I got it for her for Christmas. We watched it and enjoyed it! Ordered another one for a friend who is interested in military history and it was much appreciated. Arrived in timely matter and packaged well!

das enigmaReviewed in the United States on February 18, 2019
5.0 out of 5 stars
This movie is amazing flat out great
Verified purchase
I watched it many years ago and recently watched it again here on prime. I am really surprised that when it was in theaters it did poorly. It does follow the typical hollywood movie story line practically like every other movie out there. For me, what makes this movie so likable is the character development that the film makers do throughout the movie. They give a glimpse into many of the character's lives and when they die off in the movie, it kind of leaves you disappointed that so and so dies.
One person found this helpful
See all reviews
Back to top
Get to Know Us
Make Money with Us
Amazon Payment Products
Let Us Help You
EnglishChoose a language for shopping. United StatesChoose a country/region for shopping.
© 1996-2022, Amazon.com, Inc. or its affiliates