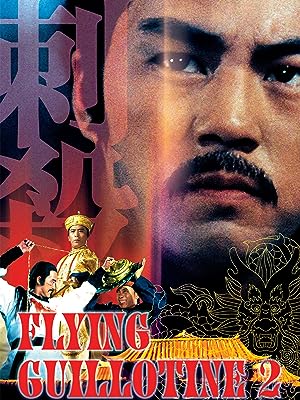 (105)6.31 h 28 min197816+
In 1975, Ho Meng-hua started an international sensation with The Flying Guillotine. Popular demand insisted upon a sequel to the original decapitator-on-a-chain, featuring a new, improved "Ring-Chain Flying Guillotine" and the only weapon that can stop it, the "Toothed Wheel".

Amazon CustomerReviewed in the United States on May 14, 2018
2.0 out of 5 stars
This is NOT the English Dub. It is in Mandarin with English subtitles.
Verified purchase
Great movie, but when I made the purchase I was expecting the English dub of the film. The product details on Amazon listed that the Audio was in English, but when I started watching the movie the language of the film was in Mandarin with English subtitles. Now that I've started watching the movie I can't get a refund per Amazon's order cancellation policy. Usually this wouldn't bother me because I watch a lot of Asian films with the subtitles, but since the product details on Amazon said that the audio was in English, that's really what I was expecting when I made the purchase. Now I'm stuck with this movie instead of another Shaw Brothers movie I could've watched that included the English dub.
One person found this helpful
Report abuse

DMDWriterReviewed in the United States on May 14, 2017
5.0 out of 5 stars
Invicible Weapon
Verified purchase
It's right after the events of the first film, where hero Ma has found a way to counter the devastating flying guillotines. But the evil emperor quickly upgrades them to counter Ma, and it's only with the help of a daughter of a court official that they might have a chance to finally end the tyrant once and for all.

This film is notable for its incredibly ruthless emperor, who manages to be both vicious and smart as the same time. You can feel the desperation of the forces against him, and for being a silly idea, the guillotines managed to be pretty impressive and not a little chilling. This one was a nailbiter to the end, and while the choreography isn't amazing, there's a sense of tension and menace found only in a few other films. Very enjoyable.

Keon B. BillingsReviewed in the United States on May 18, 2020
4.0 out of 5 stars
It's OK
Verified purchase
Simply because it's a martial art film I liked it, but I didn't love it it did not rank in my top 20. but if you've watched all of them out there and you're looking for something else to watch this qualifies.
Report abuse

MeMeReviewed in the United States on February 22, 2015
5.0 out of 5 stars
Another great Shaw brother production
Verified purchase
You have to get this movie; Ti Lung can never disappoint you with his martial arts skills. This movie featured women martial arts experts as well. The choreography of their martial arts was right on time. As usual the Shaw brothers put together another hit. You of course have to like this kind of movie. For me it's nostalgic as I grew up with these movies, so I love them all.
One person found this helpful
Report abuse

KlavaReviewed in the United States on August 17, 2014
1.0 out of 5 stars
Terrible Kung fu flick
Verified purchase
Terrible Kung fu flick. Bad story line plus ridiculous weapon made for waste of money and time. Not sure which one is worst original Flying Guillotine or 2nd one. Minus $10/$15 not as bad as waisting 3/4hrs of my life for these 2 Kung fu "classics." Save your time and money.
One person found this helpful
Report abuse

Mark Richard TubbsReviewed in the United States on April 27, 2018
5.0 out of 5 stars
Awesome classic movie
Verified purchase
Great follow up on the original. Great movie to watch for the choreography and plot.
Report abuse
See all reviews
Back to top
Get to Know Us
Make Money with Us
Amazon Payment Products
Let Us Help You
EnglishChoose a language for shopping. United StatesChoose a country/region for shopping.
© 1996-2021, Amazon.com, Inc. or its affiliates