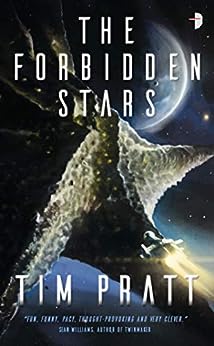 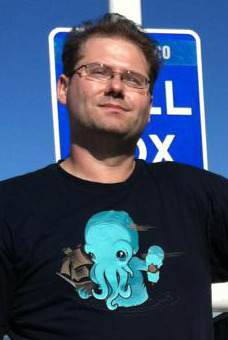 by Tim Pratt (Author) Format: Kindle Edition
Book 3 of 3: The Axiom
See all formats and editions
Sorry, there was a problem loading this page. Try again.
This “witty, heartfelt sci-fi romp” is the dazzling third installment in a diverse space opera series for fans of The Expanse and John Scalzi’s The Collapsing Empire—from a Hugo Award–winning author (Tor.com)

The ancient alien gods are waking up—and there’s only one spaceship crew ready to stop them . . .

Aliens known as the Liars gave humanity access to the stars through twenty-nine wormholes. They didn’t mention that other aliens, the ancient, tyrannical—but thankfully sleeping—Axiom occupied all the other systems. When the twenty-ninth fell silent, humanity chalked it up to radical separatists and moved on. But now, on board the White Raven, Captain Callie and her crew of Axiom-hunters receive word that the twenty-ninth colony may have met a very different fate.

With their bridge generator, they skip past the wormhole—and discover another Axiom project, fully awake, and poised to pour through the wormhole gate into all the worlds of humanity . . .
Read more
Previous page
Next page

All 3 for you in this series See full series

Praise for the Axiom series

“The engaging, inclusive, and entertaining Axiom series, may be his best work yet . . . witty, heartfelt sci-fi romp.”
—Tor.com

“Pratt’s high-tech universe of tangled alien half-truths and hidden motivations provides a fascinating setting for a gripping series that has plenty of room for future surprises.”
—Publishers Weekly

Tim Pratt is a Hugo Award-winning SF and fantasy author, and has been a finalist for World Fantasy, Sturgeon, Stoker, Mythopoeic, and Nebula Awards, among others. He is the author of over twenty novels, most recently The Deep Woods and Heirs of Grace, and scores of short stories. His work has been reprinted in The Best American Short Stories, The Year's Best Fantasy, The Mammoth Book of Best New Horror, and other nice places. Since 2001 he has worked for Locus, the magazine of the science fiction and fantasy field, where he currently serves as senior editor. He lives in Berkeley, CA with his wife and son.

timpratt.org
twitter.com/timpratt --This text refers to an alternate kindle_edition edition.

Tim Pratt was born in Goldsboro, NC, and grew up in various places in the American South. He relocated to Northern California in 2001. His fiction has won a Hugo Award, and he's been a finalist for Sturgeon, Stoker, World Fantasy, Mythopoeic, World Fantasy, Scribe, and Nebula Awards, among others. His other books include three short story collections; a volume of poems; contemporary fantasy novels The Strange Adventures of Rangergirl and Briarpatch; gonzo historical The Constantine Affliction under the name T. Aaron Payton; fantasy roleplaying game tie-ins; and, as T.A. Pratt, eight books (and counting) about sorcerer Marla Mason. He occasionally edits anthologies, including the Rags and Bones anthology co-edited with Melissa Marr. He works as a senior editor for Locus magazine, and lives in Berkeley, CA, with his wife Heather and their son River. Find him online at timpratt.org.

Jeffrie
5.0 out of 5 stars Please say Book 4 is coming?
Reviewed in the United States 🇺🇸 on September 20, 2022
Verified Purchase
I have been pleasantly surprised and very entertained with this series! I am now invested in the characters and their mission. Please write a book 4? Thank you for this story.
Read more
Helpful
Report abuse

Steven Kelber
4.0 out of 5 stars Fun But way to Easy
Reviewed in the United States 🇺🇸 on September 23, 2021
Verified Purchase
This was a very fun. Series but the end should have proven the toughest challenge not the easiest. If I could foresee the end crisis and more importantly it's solution then a combination of Shall and Callow would. Fun but less exciting than I thought it would be.
Read more
Helpful
Report abuse

Jarrett Woodrow
4.0 out of 5 stars Enjoyable but.....
Reviewed in the United States 🇺🇸 on September 13, 2020
Verified Purchase
First book was great, second was not as smooth of a story but it was worth reading. This one was also worth reading. Very creative ideas in this story. The biggest weakness was the prime character. The author developed the characters but then stops. Dilemmas in this story are not compelling as they were in the two previous stories. Good ideas that could have been a great story. I enjoyed it and hope to see more from this author.
Read more
Helpful
Report abuse

James Palmer
4.0 out of 5 stars Octopus Aliens, Space Fascists, and Starships Made Out of Meat
Reviewed in the United States 🇺🇸 on January 2, 2020
Verified Purchase
The Forbidden Stars, completing the story begun in the novels The Wrong Stars and The Forgotten Stars, is an action-packed romp through a distant solar system filled with octopus aliens, human-alien chimeras, and spaceships made out of meat. You won't get insights into the human condition, but you will get weird aliens, AI, and wisecracking characters that love to blow stuff up. I love that in a book. Captain Callie Machedo and her crew are like family, and after three books they feel like my family as well. There were some editing issues, but all in all a superb effort from Tim Pratt.
Read more
2 people found this helpful
Helpful
Report abuse

Tiny
5.0 out of 5 stars The Axiom Finish
Reviewed in the United States 🇺🇸 on June 30, 2020
Verified Purchase
The book ends oddly, the story was good, the pursuit was entertaining but the end seemed rushed. I can't tell where Mr. Pratt is going? Options exist for the story to continue but the other details almost seem as if the author is done with these characters. I guess only time will tell. Overall, an entertaining read and continued the story for many of the key characters.
Read more
2 people found this helpful
Helpful
Report abuse

Gvaz The First
4.0 out of 5 stars A good short scifi romp, and a good end to the series
Reviewed in the United States 🇺🇸 on October 21, 2019
Verified Purchase
I liked the trilogy, and was looking forward to this book since reading the first book. However, I am a bit disappointed in the fact it's over.

He wrapped things up nicely, but I still want to see what happens to the Axiom, I want to hear more about the Liars and Lantern and have Callie blow things up more.

Also there was at least 3 typos I found (her bot instead of her boot, as an example).

James
4.0 out of 5 stars Great fun
Reviewed in the United States 🇺🇸 on May 16, 2021
Verified Purchase
A trilogy so good y’all say “that’s it?” When it’s over. Good suspense that keeps u going back for more.
Read more
Helpful
Report abuse

H Patrick
3.0 out of 5 stars Good ideas - choppy execution
Reviewed in the United States 🇺🇸 on October 14, 2021
Verified Purchase
There are some good concepts here - future tech and a universe that could have underpinned a great story. Instead, its a trilogy that showcases the main character - a butch lesbian who acts like a James Bond character zipping here, zipping there arrogantly spouting disdain for her adversaries. The lesbian love isn't graphic - but the gooey dialog gets tiresome. If you are a teenage lesbian who likes sci-fi, I highly reccomend the series.
Read more
One person found this helpful
Helpful
Report abuse
See all reviews

Dm Allen
5.0 out of 5 stars Love this universe!
Reviewed in the United Kingdom 🇬🇧 on December 9, 2019
Verified Purchase
I have really enjoyed this series of books and this is the third, and it looks like, the last in the series (boo). It rounds it off nicely and ties up a fe loose ends. Enjoyable.
Read more
Report abuse

Hal5000
4.0 out of 5 stars Entertaining space opera
Reviewed in the United Kingdom 🇬🇧 on January 19, 2020
Verified Purchase
The third book of this series is full of action and revelations, but with a light-hearted atmosphere. Excellent escapist fantasy to while away a dull weekend.
Read more
Report abuse

PJHickybaby
4.0 out of 5 stars I need more
Reviewed in the United Kingdom 🇬🇧 on October 27, 2019
Verified Purchase
A great conclusion, but I want more!
Read more
Report abuse

L. Pope
5.0 out of 5 stars Aliens, gender fluid and not one mention of the US, whats not to love.?
Reviewed in Canada 🇨🇦 on December 21, 2019
Verified Purchase
As this big glorius trio of books wraps up, all i can say is bring it on Tim! Love every part of these books and as a long time sf reader i can confidently say you rank with the best!
Hoping to run into Ashok in his next life.....
Read more
Report abuse
See all reviews
Report an issue
Does this item contain inappropriate content?
Report
Do you believe that this item violates a copyright?
Report
Does this item contain quality or formatting issues?
Report