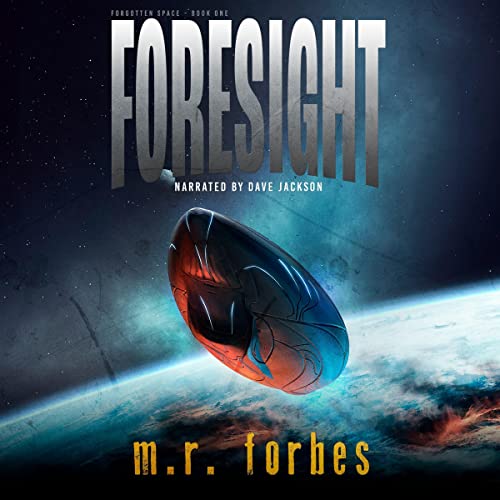 As a development platform for desperately needed advanced technology, the experimental starship Foresight is the greatest hope humankind has to flee the alien hordes. For test pilot Captain Nicholas Shepherd, the success of the program is even more personal. Successful completion means delivering his wife and son safely off-world and leaving the war behind for good. But when Foresight suffers a critical malfunction during her final scheduled flight, what should have been a minor setback becomes a major fight for survival.

With his family caught in the crossfire, Nicholas realizes that the flawed starship offers the best chance to escape. It isn’t long before even the frantic evacuation turns sideways, and he discovers that not only is the war harder to get away from than he thought, but Foresight is more than just a prototype.

Joined by an unintended crew of survivors, Nicholas is about to embark on an impossible mission that will take them far beyond the outer reaches of space. If he fails, humankind won’t just be lost.

Ric
1.0 out of 5 stars Had to stop at 12%
Reviewed in the United States on December 11, 2021
Verified Purchase
I am giving this one star for several reasons. The main reason is that the pilot is portrayed as very moody, unprofessional and combative with his own people. You see the earth has been invaded by bat people who have almost taken over the world. Why.. Who knows? Now the humans need to vacate earth and find a new planet where there are no mysterious bat people. They have to go for a 300 year flight but the only thing that will work is a ship with a neural network ( AI is what most authors call the concept). What compelled me to end the book was when we were introduced to the unstable, angry captains son. The lad was in jail with a chum and they had gotten cought breaking into some room. Keep in mind that this is the end of the world! Evil bat aliens have taken over all but a little bit of the world! This kid ignores that it's the end of the world and the few remaining marines and "robot defenders" are spread around the station.. On deaths door and Junior is doing B&E's?
I stopped reading this because I wanted them all to die at the hands of the alien bat people who I was rooting for because the humans were such idiots.
Read more
15 people found this helpful
Helpful
Report abuse

Kindle Customer
3.0 out of 5 stars Not very promising
Reviewed in the United States on August 18, 2021
Verified Purchase
Foresight is a series starter in a scifi series. Military, Earth / humanity under attack, space adventure, action.

I tried this on a whim as I sometimes try some unknown scifi author. It don't know if I'll pick up another. The 3 stars are for the action but I'm disappointed at how empty shell like the characters were so far, even the main character Nicholas. This kind of writing style in that respect doesn't lure a reader in. It doesn't hold you glued to the story. It doesn't make you care nor suck you in though it's imaginative.

The alien part at the end was pretty ridiculous and ruined the end part as well as the thing about Harry. Over the top. Not the kind of scifi I was looking for, no. Tastes vary.
Read more
17 people found this helpful
Helpful
Report abuse

London Marion
4.0 out of 5 stars Fast paced and intricate
Reviewed in the United States on September 2, 2021
Verified Purchase
This book started off fast and was really interesting all the way. As it approached the end however, it became apparent that it was not going to reach any satisfactory conclusion. I knew it was part of a series, but it needs at least a little closure in each segment. It also seems that the series is heading more into fantasy than science fiction which is a downer for me. It was well written and exciting for the most part and I thank the author.
Read more
7 people found this helpful
Helpful
Report abuse

Rusty
5.0 out of 5 stars Just when you thought you knew the score
Reviewed in the United States on September 1, 2021
Verified Purchase
M. R. Forbes' "forgotten" universe is broad and varied, but at the same time it's familiar. Different characters, different quests, but the same enemy
Until now.
Just when you think you know what's what, what you think you know is wrong. What?
Read more
6 people found this helpful
Helpful
Report abuse

Hendy
5.0 out of 5 stars Simply Outstanding!
Reviewed in the United States on July 30, 2021
Verified Purchase
Another start to a great new chapter in this series. Great characters and a little anticipated surprise. I can't wait for the next book. Keep em coming!
Read more
5 people found this helpful
Helpful
Report abuse

Jim B.
5.0 out of 5 stars First book in the series
Reviewed in the United States on August 15, 2021
Verified Purchase
The earth is being overrun by space alien organic killing machines while the Marines fight to protect a lab where the AI software is being developed that will guide the starships that are to be used to evacuate the people. Then things start to worse. A great read.
Read more
4 people found this helpful
Helpful
Report abuse

A. Rutter
3.0 out of 5 stars A most unlikely story.
Reviewed in the United States on December 8, 2021
Verified Purchase
It's interesting, but so fanciful that it's hard to get into the story. I truly doubt that we will have anti-gravity, plasma-based weapons, force fields, or space/air combined systems by 2050. That's the approximate time-frame of the story. It is definitely readable, but still, hard to swallow. Start with a dysfunctional family, a wimpy Space Force Captain, an argumentative nerd-wife, and a handful of JDs. Then another part of the cast sounds like they are galactic hitch-hikers. At times, I felt like I was dealing with a stoned Ford Prefect. Overall reaction, it's OK but not at all a favorite. Note: This is a 4-story series that's just a part of what the author calls a 'series-of-series'. The 1st 3 books do NOT end – the chop off mid-event. Book 4 sort of ends.
Read more
One person found this helpful
Helpful
Report abuse

Kindle Customer
3.0 out of 5 stars It was a good book
Reviewed in the United States on August 10, 2021
Verified Purchase
This was a good book. It was better than the previous ones I've read. I did Truly enjoyed the bantering in the latter part of the book. But this one seems to make a lot more sense than the previous books. So I going to read more. Thank you.
Read more
5 people found this helpful
Helpful
Report abuse
See all reviews

Andrew Thomas
4.0 out of 5 stars Nice story but a bit slow.
Reviewed in the United Kingdom on August 24, 2021
Verified Purchase
I enjoyed the writing as it flows very well and is well edited to remove annoying spelling and grammar mistakes. The characters are likeable too and well used. The story-line is a bit cliched though, as lots of other post apocalyptic books have queen-controlled killer-alien infestation plots. And why is it that science only comes up with anti-gravity and faster than light travel when most of the population (and so presumably most of the scientists) are dead and the aliens have almost won! Of course, that's what makes sci-fi fun, so I'm not complaining (and some aliens gave us the new technology anyway apparently, so that's OK). And this book looks like it could develop into a nice story in coming sequels. My only gripe is that it's a bit slow, mostly at the start. Honestly, I was almost 40% through before it got past ship testing and dysfunctional family background. After that there was more action though, and I started to think my purchase worthwhile when they got to London :-)
Read more
3 people found this helpful
Report abuse

Kindle Customer
4.0 out of 5 stars Interesting scenario
Reviewed in the United Kingdom on March 5, 2022
Verified Purchase
The apocalypse has arrived in the form of vicious aliens. With a huge number of human casualties world governments finally get their act together, and led by a huge consortium, to construct a fleet of Ark ships, to save part of the population.
However the head of the consortium has an alternative plan and he induces our hero to follow it.
The story has a slow start but the action soon hots up and has promise - so onto the next book.
Read more
Report abuse

Bob
2.0 out of 5 stars Tripe
Reviewed in the United Kingdom on August 22, 2021
Verified Purchase
Dreadful scenario of creatures invasion and last hope spaceship I just could not read past 30%. Childish nonsense at best
Read more
2 people found this helpful
Report abuse

PJ Online
2.0 out of 5 stars A "B movie" script...
Reviewed in the United Kingdom on September 30, 2021
Verified Purchase
... and a poor B movie script at that. Improbable story line with cardboard characters and cliched dialogue.

I did read it to the "end", but the "end" turned out to be in the middle of the story so you have to buy the next book to find out what is going on... but it was so bad I won't be finding out.
Read more
Report abuse

Nigel Frankcom
5.0 out of 5 stars Excellent series, highly recommended
Reviewed in the United Kingdom on January 30, 2022
Verified Purchase
An addictive series. Original, very well written and a real page turner. It’s quite a while since I’ve read anything this good, not saying what I’ve been reading is bad, just that this is very, very good.