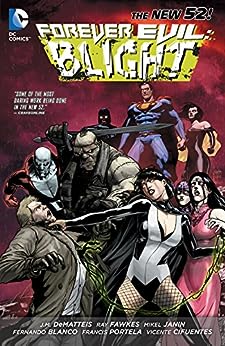 by Ray Fawkes (Author), Mikel Janin (Illustrator, Artist) Format: Kindle Edition
Book 2 of 2: Forever Evil (2013-2014)
See all formats and editions
Sorry, there was a problem loading this page. Try again.
Spinning out of the events of the massive crossover event FOREVER EVIL, comes FOREVER EVIL: BLIGHT! After a battle between the three Justice Leagues, the heroes of the DC Universe--including Superman, Batman and Wonder Woman--have all gone missing. With unspeakable evil called Blight unleashed on the world, it's up to the Justice League Dark, Swamp Thing, Pandora and the Phantom Stranger to try and stop them from destroying everything around them. 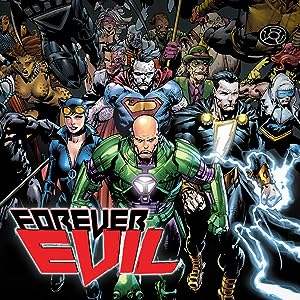 Ray Fawkes is a Toronto-based fine artist and writer of graphic novels, prose fiction, and games. Ray's work ranges in styles from introspective, dreamscape horror to bombastic slapstick. He is an Eisner Award nominee for his book One Soul, a two-time Shuster Award nominee in the "Outstanding Canadian Writer" category, and his book Possessions Vol. One: Unclean Getaway has won a YALSA award from the American Library Association. --This text refers to an out of print or unavailable edition of this title.

"This is how to do a crossover right."—NEWSARAMA --This text refers to an out of print or unavailable edition of this title.

4.5 out of 5 stars
4.5 out of 5
43 global ratings
How are ratings calculated?
To calculate the overall star rating and percentage breakdown by star, we don’t use a simple average. Instead, our system considers things like how recent a review is and if the reviewer bought the item on Amazon. It also analyzes reviews to verify trustworthiness.
Top reviews

R. H.
4.0 out of 5 stars Excellent and wacky adventure that keeps snowballing; full of supernatural fun 'n terror and makes you wanna keep reading!
Reviewed in the United States on December 25, 2014
Verified Purchase
First of all, disclaimer that these New-52 characters are quite different than the pre-52 ones, and the changes to those such as John Constantine, Zatanna, and Deadman might get to some readers, but if you accept the Justice League Dark as a team with new interpretations of these characters, you will enjoy this story. If you are not familiar with the characters previously, that's fine, too and ignore this disclaimer.

Overall the story is certainly worthy of the scale of the Forever Evil event (definitely read that tradeback, too, it is superbly excellent), but everything here is the occult, dark, and supernatural. If you like that kind of stuff, the adventure(s) here with Constantine and a new team he sets up is excellent--the action and cliffhangers truly make you wanna keep flipping the page. Furthermore, the scale of the problems and impending doom throughout keeps escalating...certainly suspenseful. Some readers might find the concluding issue to be upsetting; some may love the conclusion, but without spoiling anything, I found the twist appropriate considering the nature of the Justice League Dark and I am now a fan who'll check out the future JLD tradebacks!

Cons include a very wide breadth of artistic styles due to the many artists; sometimes this is a good thing. In this case, the huge variance from one issue to the next was a bit distracting for me, so heads-up if that bothers you, too!
Read more
2 people found this helpful
Helpful
Report abuse

alexi_m
3.0 out of 5 stars Blight is okay
Reviewed in the United States on March 6, 2015
Verified Purchase
As a whole this is a very okay book and you get a lot of story for your buck. You get a lot of issues for your money, which is always nice and you will spend a good amount time reading it. Unfortunately some of those times will feel like a chore and sometimes it will feel bogged down in details. But within this large stories is lot of potential side plot lines that can be very enjoyable.

The main plot line of Blight is basically two stories within this trade paperback that are in the background of Forever Evil event. The entire arc is based on Constantine's love of Zatana and his attempt to find her. Both stories are stretched way throughout a number of the Justice League Dark book and character series. One story includes a lot of connections to Christianity and the teachings of the Bible and the other story is a grand adventure against Magic Collaborators of the Crime Syndicate and the secret socitey. There is some really good moments with each of the characters including Constantine, The Phantom Stranger, and Deadman, however I expected some of my favorite characters to make more of an appearance like Frankenstein and Zatana. Furthermore Swamp Thing is used in some really weird ways and essentially feels very disconnected from the ongoing Swamp Thing series which is the one character series that is not included as part of the Blight storyline.

I feel that the Blight book could of been better if some of these issues had been edited down and if it had been split into books to make feel a lot less like a chore.
Read more
One person found this helpful
Helpful
Report abuse

Michael Faust
5.0 out of 5 stars Forever Evil is a Must Have. Tie ins included!
Reviewed in the United States on February 10, 2017
Verified Purchase
Love getting my graphic novels from Amazon. Speedy delivery and never have to worry about the condition of the book or price! Forever Evil is a must have. All the tie ins included. Anything with Forever Evil in the title, just get it. One of the best from the New 52 era. Highly recommended this graphic novel. Hope that this helps.
Read more
Helpful
Report abuse

E. Williams
5.0 out of 5 stars Occasionally DC does something right
Reviewed in the United States on January 19, 2018
Verified Purchase
One of the last decent books DC put out in recent years. The whole Forever Evil arc is worth reading.
Read more
One person found this helpful
Helpful
Report abuse

jessie
5.0 out of 5 stars Love it
Reviewed in the United States on April 18, 2021
Verified Purchase
Love it
Read more
Helpful
Report abuse

Dylan McGregor
5.0 out of 5 stars Awesome! The JLD is just what the doctor ordered (or nurse in this case)
Reviewed in the United States on December 11, 2014
Verified Purchase
I've read this book a couple times now. The first time I read it I promptly did what DC comics wanted me to and grabbed every other book even remotely attached to this one. I don't normally do that but this story was too good not to have all the pieces. I'm a fan of the Hellblazer days (a 90's comic title that didn't suck for a change) and to have John have his own book that includes reboots of some of my favorite characters as some screwed up makeshift team of supernatural heroes that is acknowledged as its own "Justice League" (stick that in your batarang Dark Knight) is more than I could have asked for. The DC universe has always been ripe with supernatural potential but it never got the attention it deserved beyond Dr. Fate and Wonder Woman's snooze-worthy loosely based Greek crap. Blight is awesome and I highly recommend it.
Read more
One person found this helpful
Helpful
Report abuse
See all reviews

Stranger
5.0 out of 5 stars All-Blight on the Night
Reviewed in the United Kingdom on October 16, 2014
Verified Purchase
This volume collects the full story of Forever Evil Blight and contains Justice League Dark 24-29, Constantine 9-12, Trintiy of Sin Pandora 6-9 and Trinity of Sin Phantom Stranger 14-17, even though there are four different titles involved luckly enough J.M DeMatteis and Ray Fawkes both write two of the titles each so there is a nice synergy in the storytelling, that apart from the odd case of seeing the effect before the cause, makes for a good continous story that apart from the odd lull really does a good job of showing off the magic side of the New 52.

Following the end of Trinity War all off the Justice Leagues are missing, John Constantine somehow has escaped and now he must form a new Justice league Dark to find Zatanna and the others but first they must deal with a new threat in the form of 'Blight' a creature formed off the darkest thoughts of the human race, the new team consists of Nightmare Nurse, Swamp Thing, Pandora and Phantom Stranger, not a team to inspire confidence especially when led by Constantine.

I won't go into two many story details but I will say the main strand of the story at least intially is about the darkness inside all off us and how to combat it and this does make for an interesting story especially considering how much dark some of the stories protaganists have on the inside, but it also is about love, redemption and forgiveness, there really is a good amount of character building included as well (apart from Swamp Thing who is a bit underused, but then he has his own seperate title, so that is understandable) with Constatine and Phantom Stranger especially really growing as characters throughout this whole story, really I could say more but I wan't to leave you to find out the rest yourselves.

If you have been reading Justice league Dark and wondering whether to get this or Volume 4 of that title, get this, it has the whole story and is only missing the two Trinity War tie-in issues, which it is worth getting in the Complete Trinity War collection anyway, there may be a few issues with storylines from Phantom Stranger especially that if you haven't been reading that that may confuse slightly, but enough explination is giving to at least get the gist of what is going on, it is just a well told and entertaining magical story that has some wonderful face offs, lots of supernatural cameos and even a talking dog (trust me it's not stupid), even if you haven't been reading much of the dark side of the New 52 and want to get all the Forever Evil titles this stands well enough on it's own to be enjoyed, but it is best enjoyed with a knowledge of what has gone before in at least Justice League Dark.
Read more
4 people found this helpful
Report abuse

Frazer Miller
5.0 out of 5 stars Five Stars
Reviewed in the United Kingdom on December 31, 2015
Verified Purchase
great crossover storylines, be sure to read forever evil in order ;)
Read more
One person found this helpful
Report abuse