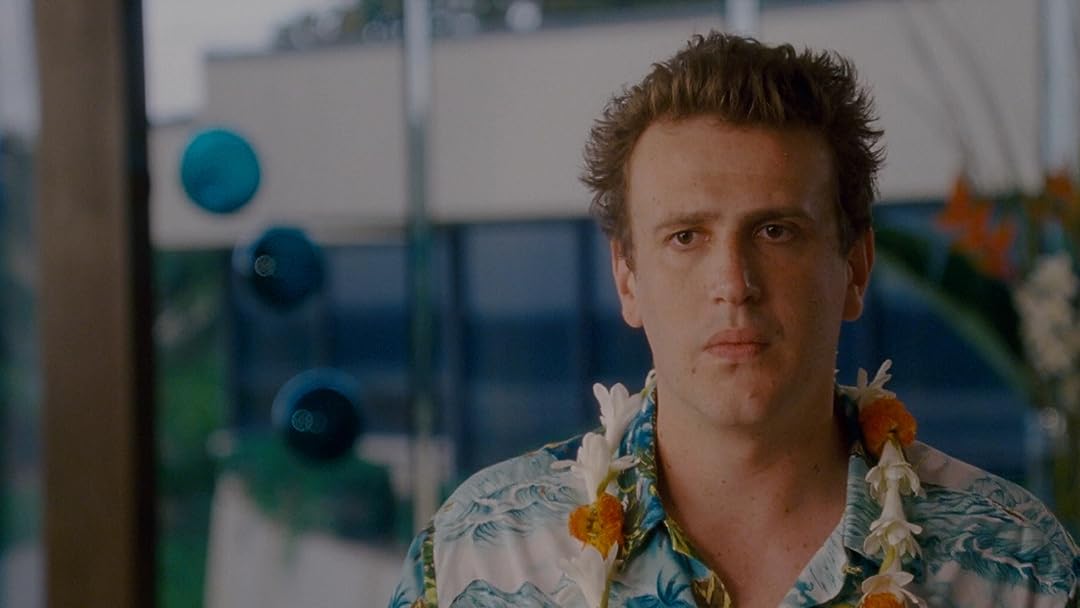 (6,468)
7.11 h 51 min2008X-RayR
Devastated from a recent break-up with his girlfriend, Peter takes a Hawaiian vacation. But little does he know that his ex is also traveling to the same resort with her new boyfriend.

Donut208Reviewed in the United States on September 27, 2019
5.0 out of 5 stars
ARDENTLY &lt;3 MOVIE HWVR THIS IS NOT UNRATED VERSION
Verified purchase
Purchased even though I own the hardcopy - Mr. Segel's penis should be heard slapping his thighs and SEEN, this digital copy has omitted a large appendage. SUPER WEAK! I am a 51 year old single straight female who, after a run of craptastic / unfulfilling relationships, has consciously been refraining from having any type of relations for over 5 years - As this movie has seemingly espoused - No longer will I get over by getting under nor atop some random. So yeah, my purchase was motivated by the expectations of laughs and seeing a decent size po. I laughed
18 people found this helpful

S. P.Reviewed in the United States on May 15, 2021
1.0 out of 5 stars
Worst Movie I Have Ever Watched
Verified purchase
This movie is the worst movie I have ever seen. The scrip seems to have been written by an immature 15 year old child high on pot or such. The "humor" was not clever or funny in the least but rather just a string of one crude one-liners meant to force a nervous laugh. The acting was the worst I have ever seen but to be fair to the actors, they had a terrible script and terrible story line. The story line was so juvenile and simple that everything was predictable. There was a lot of flashing of naked parts so I guess this is why teens might be entertained and give this movie more than one star. I thought the movie would never end (I was watching it with friends so was being polite to continue to watch with them until I threw my hands up and announced the I simply could not waste any more of my time). My friends also agreed that it was the worst movie they had ever seen.
4 people found this helpful

RDDReviewed in the United States on April 1, 2020
4.0 out of 5 stars
Funny, but Unrated Doesn't Add Much
Verified purchase
Nicholas Stoller’s 2008 film “Forgetting Sarah Marshall” follows a script from Jason Segal and was produced by Judd Apatow. It captures the late-2000s humor of Apatow and Segal while also examining the incestuous nature of Hollywood relationships, where everybody knows everyone else and may have at one point dated them.

The story begins with actress Sarah Marshall (Kristen Bell), who appears in a CSI-style show, breaking up with her composer boyfriend, Peter Bretter (Segal). Bretter begins a slow decline into depression until his step-brother, Brian (Bill Hader), convinces him to take a vacation. He goes to Hawaii where he runs into Sarah. Rachel Jansen (Mila Kunis), a hotel receptionist, takes pity on him after Peter discovers that Sarah has been seeing Aldous Snow (Russell Brand), a self-involved singer, since before they were technically broken up. Peter begins working on rediscovering a sense of joy, befriending Jansen and a waiter named Matthew Van Der Wyk (Jonah Hill), who’s a fan of Aldous, a bartender named Dwayne (Da’Vone McDonald), and Chuck/Kunu (Paul Rudd), a surf instructor. He also helps a newlywed couple (Jack McBrayer and Maria Theyer) who struggle through their intimacy issues.

The film epitomizes comedy from this era while Segel’s interest in muppets (his character wants to make a Dracula-themed rock opera with puppets called “A Taste for Love”) is a clear forerunner to his work on “The Muppets” (2011), even singing the Muppet theme at one point. This unrated version includes more of Peter’s efforts to move past Sarah by hooking up, an extended scene with Kristen Wiig as a yoga instructor, and more explicit language. Very little of the story itself is changed, however, so those who enjoy Segal’s humor will find this more of the same.

Joh N' OhReviewed in the United States on June 21, 2021
4.0 out of 5 stars
unforgettable underrated
Verified purchase
The movie isnt perfect " hence 4 stars" The cast is absolutely incredible and their roles are all memorable. This romantic comedy starring a seagull, a euro superstar comedian, and two polar opposite looking goddesses is just a fun if not mildly sad story. Cheaters be cheatin'. Seagul man is very underrated and i feel his starring role in this movie is a testament to that. His is charming in the a little too talented of an everyman kind of way, heartbroken and relatable. Kunis does what she does best. Show strong feminine personality of hers . She comes off as capable, stubborn, adventurous and confident in a realistic if not exaggerated way. Brand is what he always is. smooth, hilarious, and eccentric. hes just being a version of himself and i love it. Kristen bell.... i might be bias here as shes probably my favorite actress of the last 10 years regardless of her movies usually not being box office smashes and her roles typically being cliche. Something about her is intoxicating, even this role of a wannabe movie star who leaves her trusting and loving boyfriend for a super slick russel brand somehow doesnt come off that bad. She really is the bad guy here and i still love her. She garners empathy regardless of her actions.

Watch it, love it, rewatch it! also enjoy the supporting cast as they are all great!

joel wingReviewed in the United States on April 8, 2021
3.0 out of 5 stars
1 of a number of 2000s movies that puts male at center of Rom-Com
Verified purchase
Forgetting Sarah Marshall was similar to a number of movies that came out in the 2000s like I Love You Man, Knocked Up, and others that featured male characters dealing with relationships. This one featured Jason Segel who gets dumped by his TV star girlfriend Kristen Bell who starts seeing Rockstar Russell Brand and then meets Mila Kunis. The cast has some other familiar faces that were in these movies including Paul Rudd and Jonah Hill. The story focuses more on the romance rather than the comedy although there are funny parts like Segel crying like a baby in his hotel room or crying like a baby after he stabs a pig for a BBQ. There are other scenes that flopped with the laughs. Brand as a rock star actually shines the brightest in the cast. Overall, Forgetting Sarah Marshall good but not as good as some of its contemporaries.
One person found this helpful

John gReviewed in the United States on May 24, 2021
4.0 out of 5 stars
COULD be Step Brothers funny without Segal trying to sing/play constantly
Verified purchase
This would have been funny if Jason Segal wasn't trying too hard to convince us he's a talented musician. Likewise on HIMYM, he's constantly showing us he has a VERY cursory ability to play piano and drums while sing/talking. To make it worse...hottest female on the planet Mila Kunis has the WORST fake laugh of any voice/actress in hostory. You hear it in Ted when that vapid moron Marky Mark is on top of her and they find the Flash Gordon ray gun and she does that horrible fake giggle proving how little chemistry they had. She does is again while moron giant is playing his horrible song at that bar and she's the only one laughing. Ruins the movie, more Kristen Bell (2nd hottest female ever) and Russel Brand and especially Jonah Hill being so over eager and making everything he is in funnier. Should be better.....Jason Segal isn't very funny.....I Love You Man was 10x better even though Paul Rudd has the line delivery of a drunk Jimmy Fallon...or just...Jimmy Fallon

TBoneTheOriginalReviewed in the United States on June 22, 2019
5.0 out of 5 stars
Code expired!
Verified purchase
I love this movie, but the digital code that came with it exited in 2012. Here’s hoping Universal gets back with me and provides a new code. If they do, it’s an instant 5 stars.

Update 6/25/19: I reached out to Universal, and while they couldn't give me a code for this movie, they did offer me a code for one of dozens of other movies... and I got E.T. The Extra Terrestrial. So if you just contact them, you'll get something for it. In the meantime, I consider that to be good customer service and I've updated my review to 5 stars.
2 people found this helpful

JudyReviewed in the United States on March 21, 2019
2.0 out of 5 stars
Digital Copy Code Expired
Verified purchase
I love this movie! I thought I would buy the Bluray with the Digital Copy to download and watch through iTunes. I received the movie in the mail today and went to download the movie, however the website was not working. As I looked closer, the code expired in 2012 -- 7 years ago. Although this is an awesome movie and was reasonably priced, I am a little annoyed that it came with an expired code.
3 people found this helpful
See all reviews
Back to top
Get to Know Us
Make Money with Us
Amazon Payment Products
Let Us Help You
EnglishChoose a language for shopping. United StatesChoose a country/region for shopping.
© 1996-2022, Amazon.com, Inc. or its affiliates