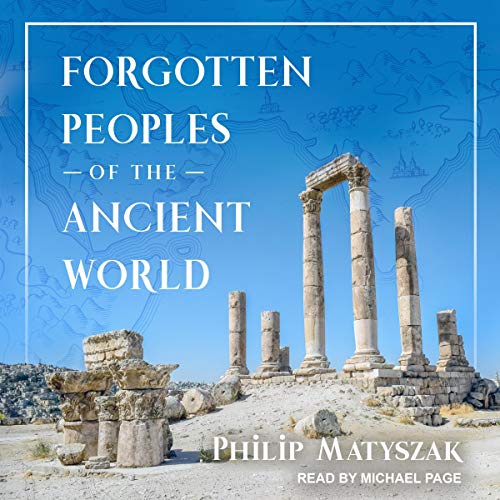 Forgotten Peoples of the Ancient World

4.7 out of 5 stars
4.7 out of 5
145 global ratings
How are ratings calculated?
To calculate the overall star rating and percentage breakdown by star, we don’t use a simple average. Instead, our system considers things like how recent a review is and if the reviewer bought the item on Amazon. It also analyzes reviews to verify trustworthiness.
Top reviews

Marty
5.0 out of 5 stars A Real Find!
Reviewed in the United States on January 30, 2021
Verified Purchase
I am a reasonably well read student of tribal migrations in the Ancient World. This new book was a delightful find. It has clarified what I already knew, and helped place it in historical and cultural context. And it has introduced me to tribal groups and events of which I had only vague notions. Dr Matyszak is incredibly well informed, and an excellent writer who has mastered the challenge of relating piecemeal scholarly findings in coherent and highly readable stories.
Read more
18 people found this helpful
Helpful
Report abuse

Assaph Mehr
5.0 out of 5 stars Interesting perspective about the edge of ancient civilisations
Reviewed in the United States on September 18, 2020
Matyszak is one of my favourite popular historians, and I loved previous books of his. This books offers a review of people and nations you've probably heard of in passing, and promises to give you a deeper understanding of those forgotten people and their impact on later generations.

The book is divided into 4 parts, from the first civilisations to rise, to the early iron age, through the rise and then the fall of Rome. As those great civilisations rose and fell, they came into contact with other people, and they are the focus of this book.

Each section follows a few of those lesser known people, from their first appearance in recorded history to their eventual disappearance. Many of them are only known from the records of the "big" civilisations that left records, but Matyszak carefully collects all the evidence - historical and archaeological to present a picture of what life was for them.

I love Matyszak flowing style, that brings dusty archaeological remains and obscure original references to life. He keeps you engaged and involved in those long forgotten people, while gently educating and expanding your understanding of historical processes at the same time.

This is not a history book. Each section follows a particular people, about their interactions with others. It can be a big disjointed if you try to follow overall events, as the aim is different. It will broaden and deepen your understanding of what happens at the edges of history.

Felix, who comes from one of the "main" cultures, has seen both those 'barbarian' waves crashing against the borders of his burgeoning empire and conquered people thoughtlessly integrated into his culture. He has a low opinion of the politicians leading his republic so he wasn't surprised to hear that their mismanagement has caused many allied or subjugated people to turn into intractable enemies. Still, for him, life is what it is and he plans to make the most of the ascendancy of his culture.

I love reading history, and this books offers a very unique perspective about subjects not often covered in depth. If you want to learn more than the beaten path, this is for you.
--
Assaph Mehr, author of  Murder In Absentia: Togas, Daggers, and Magic  - for lovers of Ancient Rome, Murder Mysteries, and Urban Fantasy.
Read more
35 people found this helpful
Helpful
Report abuse

Peter S. Bradley
TOP 500 REVIEWER
5.0 out of 5 stars A Cook's Tour of the Footnotes of History
Reviewed in the United States on April 17, 2021
Verified Purchase
Forgotten People of the Ancient World by Phillip Matyszak

This is a fun book. It is not a particularly deep book, but it's not intended to be deep. Instead, the author, Phillip Matyszak, seems to be going for a popular appeal by making it succinct, light, occasionally humorous, and broad.

The book covers four broad sweeps of time: (a) the First Civilizations, (b) from Akkad to Alexander; (c) the peoples wiped out by Rome, and (d) the people who brought down Rome. So, with that inventory, the book starts in the Mid-East and gradually makes it way west until the final entry returns us to the Persian-Indian border with the White Huns, aka the Hephthalites.

As a history lover, I've often read these names in passing without giving them more thought than I would a background character in Shakespeare. This was an interesting "backgrounder" to situate these people in their historical context as individuals.
Read more
4 people found this helpful
Helpful
Report abuse

C. Derick VarnTop Contributor: Graphic Novels
5.0 out of 5 stars A solid introduction
Reviewed in the United States on March 12, 2021
Verified Purchase
This is a solid introduction to the history of many more obscure ancient West Asian, North African, and European cultures. The book is a quick reading with Matyszak providing a summary of what is generally known about each culture.
Read more
5 people found this helpful
Helpful
Report abuse

Alice Riggs
5.0 out of 5 stars Fascinating Facts About Ancient Peoples
Reviewed in the United States on April 26, 2021
Verified Purchase
I’ve never known much more about certain ancient peoples than what I learned on the “Attila the Hun Show” sketch on Monty Python’s Flying Circus.

“Alaric the Visigoth, Galseric the Vandal and Theodoris the Ostrogoth....But none surpassed in power and cruelty the mighty Attila the Hun.”

This book includes not only detailed information about the Visigoths, Vandals and Ostrogoths, but many other lesser known groups such as the Amorites, Arameans, Dorians, Illyrians, Nabataeans, Galatians, and Alans, among about 40 others.

There isn’t a chapter on the Huns, but they aren’t really a “forgotten people.” They do turn up here and there, though.

I bought this book on the author’s name alone. That and the title was intriguing. I read Philip Matyszak’s “ The Greek and Roman Myths: A Guide to the Classical Stories” when it came out and loved it.

Interested in reading about some of the cultures written about in the Bible? They’re here.

Want to know where the Egyptians got their chariots from?

What happened to the Lost Tribes of Israel?

What is the Gordian Knot?

Care to speculate about the ancestors of the modern Kurds or Ossetians?

Who were the black men who ruled Egypt during its 25th dynasty?

Why were the Greeks and Bactrians disturbed by each other’s funeral rites?

Who was responsible for creating the carvings of Buddha (since destroyed by the Taliban) in Afghanistan?

Who were the red-haired, blue eyed warriors that thundered into Greece on horses around 1500 BC?

It’s all here and then some.

Brian Guy
5.0 out of 5 stars An Informative Source
Reviewed in the United States on April 19, 2021
Verified Purchase
This book provides a great introduction to many of the lesser known peoples of antiquity without being droll. Overall, it's both a great start for anyone looking to dive into the more obscure parts of history or a fun read for people with a casual interest in the past.
Read more
2 people found this helpful
Helpful
Report abuse

Harrison Boot
3.0 out of 5 stars Two-dimensional
Reviewed in the United Kingdom on February 22, 2021
Verified Purchase
A very disappointing book - not scholarly enough. The author only uses Latin and Greek sources and totally IGNORES the crucial Arabic texts and histories in other languages which are critically necessary for discussing ‘forgotten’ peoples in the Middle East. I had expected better from Thames & Hudson: are they too stuck in the 19th and 20th centuries?
Read more
3 people found this helpful
Report abuse

paulw
5.0 out of 5 stars A great gap filler
Reviewed in the United Kingdom on January 4, 2021
Verified Purchase
I really enjoyed this clearly written, well and relevantly illustrated outline of these peoples. I will certainly keep it as a reference. Early Mesopotamia and Late Antiquity make a lot more sense to me now.
Read more
2 people found this helpful
Report abuse
See all reviews
Back to top
Get to Know Us
Make Money with Us
Amazon Payment Products
Let Us Help You
EnglishChoose a language for shopping. United StatesChoose a country/region for shopping.
© 1996-2021, Amazon.com, Inc. or its affiliates