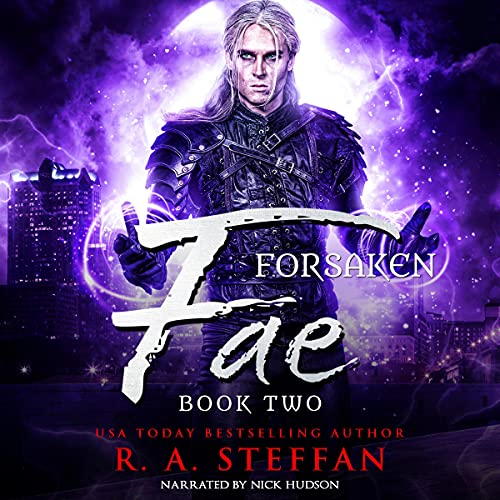 Len needs to track down a handbasket ASAP, because things are going straight to hell.

In the aftermath of the disastrous battle to close the rip between realms, he's stuck with a Fae who seems convinced that the only way to fix things is to leap directly into the maw of the Wild Hunt.

Len recognizes martyrdom when he sees it, and he's not about to let Albigard of the Unseelie sacrifice himself on the altar of his own guilty conscience.

After the events of the past few weeks, it's looking more and more like Len's ghosts may hold the key that can lock the Hunt back inside its box of horrors. But when circumstances trap him alone with Albigard in a dead pocket realm, it becomes increasingly clear that the Fae is every bit as damaged inside as Len is.

Before they can stop the Hunt and save the lost souls of their closest friends, they'll have to glue their broken edges together somehow. Only then will Len have a shot at undoing the damage that's already been done.

He just has to keep himself - and Albigard - alive long enough to get the chance.

Forsaken Fae is a slow-burn M/M urban fantasy trilogy. It's set in the same world as the best-selling series The Last Vampire and its other spinoff, Vampire Bound. Download Book Two today, and enter a world shared by humans, fae, demons, and vampires. It’s a place where the supernatural threatens the mundane, nothing is as it seems, and enemies must overcome their tangled pasts in order to save the future.

4.6 out of 5 stars
4.6 out of 5
279 global ratings
How are ratings calculated?
To calculate the overall star rating and percentage breakdown by star, we don’t use a simple average. Instead, our system considers things like how recent a review is and if the reviewer bought the item on Amazon. It also analyzes reviews to verify trustworthiness.
Top reviews

Kdb
VINE VOICE
5.0 out of 5 stars The beginning of the end
Reviewed in the United States on September 17, 2021
Verified Purchase
Len never saw this coming sure his gotten into some bad situation become envolved with things that go bump in the night and fought his addictions but never did he think for a moment that his need to protect others would make him his enemies champion.

Albiguard may have just run out of Fae luck betrayal everywhere and his only help is Len a Necromancer also half human and he will commit one of the Fae's greatest sins lying even to protect now he truly is Forsaken and the Hunt is just waiting to make its move. How do they save there friends souls and beat a monster that's slipped its chains. As for Len and Albiguard they're on a different path now and there boundaries are fading by the day Albiguards truth and Lens disgust with the Fae deepen the more he learns of there treatment of Fae who step out of line and love were they shouldn't.

This series gets better with ever book the snark between both Albiguard and Len is still there but it's developed into something more as Albiguard starts to loosen up and let Len see him and not just the person he shows to everyone else. The romantic aspect is slowly building with some more intense moments and the mystery behind the hunt and why it's becoming more powerful can't wait to find that out.
Read more
Helpful
Report abuse

Jan
5.0 out of 5 stars Loved it!
Reviewed in the United States on April 28, 2021
Verified Purchase
Len and Albigard are in the thick of the problem now. Trying to save their friends and the world, things go from bad to worse. It's a cliffhanger and I am dying to get the next book! I love this series. Steffan makes her characters believable and the story moves at a rapid pace. It was over too soon. Beware there are some steamy M/M sex scenes, but you can skip over those if you are so inclined.
Read more
One person found this helpful
Helpful
Report abuse

Jmills85
5.0 out of 5 stars Wow
Reviewed in the United States on April 27, 2021
Verified Purchase
To be something easily and quickly read so much happened !! This books picks up right where we left off with Len and Abi things turn dire quickly then heat up then turn dire again action packed it was a great addition to this series
Read more
Helpful
Report abuse

Len Evans Jr
5.0 out of 5 stars Wonderful second book of the series!
Reviewed in the United States on May 1, 2021
Verified Purchase
This second book of the series manages to take the suspense and drama up a notch with a wonderful result. The author also does a great job with Len's & Abilard's relationship into new territory.
Read more
Helpful
Report abuse

bren
5.0 out of 5 stars Another great one
Reviewed in the United States on May 6, 2021
Verified Purchase
Another great book, but a cliff hanger. Can not wait for the next book. I so hope all works out for them. Well done to the author.
Read more
Helpful
Report abuse

Walter Kallenback
5.0 out of 5 stars So happy I started this series
Reviewed in the United States on August 22, 2021
Verified Purchase
Can’t wait to read this next one in the series. So loving the characters and the plot. Do yourself a favor and read this series
Read more
Helpful
Report abuse

Melvena Asa
5.0 out of 5 stars Forsaken Fae
Reviewed in the United States on June 23, 2021
Verified Purchase
Absolutely Fantastic. This book is full of so much mystery and exciting twists from the beginning to the very last word.
Read more
Helpful
Report abuse
See all reviews

Supergran
4.0 out of 5 stars Who would have thought it, a gay fae
Reviewed in the United Kingdom on April 28, 2021
Verified Purchase
I missed the usual characters in this series, I missed the excitement we usually get, but albigard and Len are great, it was good to see albigard drop his grisly demeanor with Len, fighting for their lives together from the hunt brought them closer and the sexual tension was amazing. Can't wait to see if they get closer after their imprisonment, asumming they both escape, and can Albigard outwit his dispicable father, let's hope so
Read more
Report abuse

Janice Allen
5.0 out of 5 stars Excellent, excellent,, excellent!
Reviewed in the United Kingdom on May 21, 2021
Verified Purchase
As always this book does not disappoint, just like her other trilogies in this series, it's exciting, amusing, dark, sexy and non stop. I thought Rans was my favourite character now, Albigard has the edge. I can't wait for the conclusion.
Read more
Report abuse

Brianne O’Brien
5.0 out of 5 stars Addictive read
Reviewed in Canada on July 15, 2021
Verified Purchase
Couldn’t stop reading, LOVE IT! I highly recommend this book to everyone. Loved the whole series..can’t wait for more. Be prepared to get lost in this story.
Read more
Report abuse
See all reviews
Back to top
Get to Know Us
Make Money with Us
Amazon Payment Products
Let Us Help You
EnglishChoose a language for shopping. United StatesChoose a country/region for shopping.
© 1996-2021, Amazon.com, Inc. or its affiliates