Fossils Tell of Long Ago (Let's-Read-and-Find-Out Science 2) and millions of other books are available for Amazon Kindle. Learn more 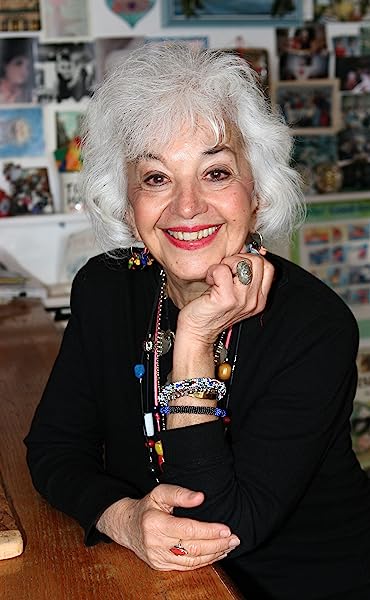 by Aliki (Author, Illustrator)
4.7 out of 5 stars 197 ratings
Part of: Let's-Read-and-Find-Out Science 2 (93 books)
See all formats and editions
Sorry, there was a problem loading this page. Try again.

Read and find out about fossils in this colorfully illustrated nonfiction picture book.

What is a fossil? Sometimes it's the imprint of an ancient leaf in a rock. Or it could be the skeleton of a dinosaur that has turned to stone. With clear prose and beautifully detailed illustrations, award-winning author and illustrator Aliki describes the different ways fossils are formed and what they tell us about life on Earth long ago.

This is a clear and appealing science book for early elementary age kids, both at home and in the classroom. It includes a find out more section with a glossary and activity guide so kids can create their own fossils for someone to find a million years from now.

Author/illustrator Aliki has penned four books listed as "exemplary" titles in the Common Core Standards and is a widely recognized name in nonfiction for children. Both text and artwork of this updated edition were reviewed for accuracy by paleontologist Dr. Kathryn Hoppe and by Dr. William F. Simpson of the Field Museum.

This is a Level 2 Let's-Read-and-Find-Out, which means the book explores more challenging concepts for children in the primary grades. The 100+ titles in this leading nonfiction series are:

Books in this series support the Common Core Learning Standards, Next Generation Science Standards, and the Science, Technology, Engineering, and Math (STEM) standards. Let's-Read-and-Find-Out is the winner of the American Association for the Advancement of Science/Subaru Science Books & Films Prize for Outstanding Science Series.

What is a fossil?

A fossil is anything that has been preserved, one way or another, that tells about life on Earth. But you can make a fossil, too—something to be discovered a million years from now—and this book will tell you how.

With more than 60 fiction and nonfiction titles for children to her credit, Aliki has been delighting her many fans since her first book was published in 1960. Born in New Jersey, she now lives in New York City.

Aliki's books for young readers include the Let's-Read-and-Find-Out titles Digging Up Dinosaurs, Fossils Tell of Long Ago, My Feet, and My Hands. Other nonfiction books by Aliki include How a Book Is Made, Mummies Made in Egypt, My Visit to the Aquarium, My Visit to the Dinosaurs, My Visit to the Zoo, Wild and Woolly Mammoths, and William Shakespeare & the Globe.

Start reading Fossils Tell of Long Ago (Let's-Read-and-Find-Out Science 2) on your Kindle in under a minute.

Aliki is the author and illustrator of more than fifty books for children that are treasured by readers all over the world. Her many well-loved titles include My Visit to the Zoo, My Visit to the Aquarium, My Visit to the Dinosaurs, Wild and Woolly Mammoths, Tabby, and Those Summers. Aliki lives near the Globe theater, in London, England.

In Her Own Words..."Aliki grew up in Philadelphia in a big Greek family where everyone was busy creating and sharing their activities. She knew from the time she was in kindergarten that she wanted to bean artist, although music was also a natural talent. She was encouraged throughout her early life by her parents and by teachers she will never forget."She graduated from the Philadelphia Collegeof Art and started a career in advertising art. After she married Franz Brandenberg, Aliki continued her career in his country, Switzerland, where they lived for three years. It was there that she wrote and illustrated her first book, The Story of William Tell, which was published in England. When they moved to New York, Aliki wrote and illustrated My Five Senses--the book that changed the direction of her career and her life.

Although she had never thought of being a writer, Aliki has been making books ever since. Children's books, she says, are a combination of two things I love: words and pictures. I also love the privacy of books--both reading them and making them. Aliki writes fiction, in which she can express her feelings, and nonfiction research books about subjects she's interested in and wants to know more about. Each book is a new challenge; each is different, she says. The subject directs the way I illustrate a book, the same way friends bring out different parts of us. The challenge is to get the words right and then to make pictures that expand and enhance their meaning.""Besides her own books, Aliki has illustrated many written by Franz Brandenberg and other authors. Her two children are also in the arts. Jason is a filmmaker and Alexa is a children's book author-illustrator. They appear in almost all of her books as cats, mice, or themselves.

Aliki loves music, theater, cinema, museums, children, her cat, Nefertiti, and working in her garden in London, where she lives. She travels frequently to the U.S., Greece, Switzerland, and other parts of the world, though most of the time she is alone in her studio with the books she is working on--and Mozart."

Amazon Customer
5.0 out of 5 stars A Great Teaching Tool
Reviewed in the United States on March 4, 2008
This is a great book for grades 1-4 as an introduction to fossils. It covers how they are made and where they are found in a very easy to understand way. It creates an interest in fossils and will probably send the children digging in the dirt! It even has simple instructions for how the children can create a "fossil" of their own hand.
Images in this review

J. Zepf
5.0 out of 5 stars Excellent introduction to fossils for children
Reviewed in the United States on May 10, 2019
Verified Purchase
I read this Fossil book to my five-year-old grandson and he enjoyed it. It gave an age-appropriate description of how fossils are made, and even included a section on how a child could make his/her own "fossil" for others to discover. Cute book for children.
Read more
One person found this helpful
Helpful
Report abuse

charles shelton
5.0 out of 5 stars Nice little book
Reviewed in the United States on August 6, 2021
Verified Purchase
We purchased this to go along with our homeschool history curriculum. While the boom is a pretty good resource, I would recommend just getting it from the library. It is short and a one and done type of book.
Read more
Helpful
Report abuse

bette
3.0 out of 5 stars Not a bad book.
Reviewed in the United States on December 17, 2013
Verified Purchase
This book is average in its explanation of fossils. Although described as appropriate for younger children, it is directed more toward older ones. Some of the material is explained in a way that is too complicated for four year olds which is the age for whom we purchased the book. We used it in a demonstration of fossils in a Montessori classroom lesson on fossils and had to improvise quite a bit.
Read more
8 people found this helpful
Helpful
Report abuse

Amazon Customer
5.0 out of 5 stars Quick & Accurate
Reviewed in the United States on January 11, 2021
Verified Purchase
I purchased this book to use in my 2nd grade classroom. It's a very good book full of important facts about fossils, written so that young children can understand.
Read more
Helpful
Report abuse

thekarat
5.0 out of 5 stars A good one to go with
Reviewed in the United States on December 27, 2020
Verified Purchase
4 year old loves and understands it. Been a great learning experience and subject for many conversations so far. Would recommend if looking for beginners fossil book for that age.
Read more
Helpful
Report abuse

jw
4.0 out of 5 stars he liked it
Reviewed in the United States on June 27, 2020
Verified Purchase
He liked it so much he wants another one
Read more
Helpful
Report abuse

Anggel
5.0 out of 5 stars Science: Ages 3-7: Intro to fossils basic concepts and types.
Reviewed in the United States on August 26, 2016
Verified Purchase
We enjoyed this so much, it was better than I expected it to be as far as demonstration and depth of concept.
I found it to be age appropriate for my daughters and nephews ranging in age from 3-7.

blackbearcabin
5.0 out of 5 stars My preschool class loved this book
Reviewed in the United States on May 15, 2015
Verified Purchase
My preschool class loved this book! It was perfect for dinosaur week before we went to the museum of nature and science for our field trip! I also brought in some fossils for them to look at! loved it!
Read more
One person found this helpful
Helpful
Report abuse
See all reviews

Ms. BMac
5.0 out of 5 stars great book for 6 year olds school project
Reviewed in the United Kingdom on July 12, 2016
Verified Purchase
I suggest you buy all her books they are brilliant, my 6 year old did it at school for a project and they are amazing, very clear and great knowledge and very serious and interesting, not dumbing down , which is important
Read more
One person found this helpful
Report abuse

Carolyn Rapolas
5.0 out of 5 stars educational
Reviewed in the United Kingdom on June 28, 2017
Verified Purchase
my grandson loves it...
Read more
One person found this helpful
Report abuse

Nam
2.0 out of 5 stars Size
Reviewed in Canada on December 21, 2019
Verified Purchase
The story is fine. I wish the book size is a little bit bigger for my children.
Read more
Report abuse
See all reviews