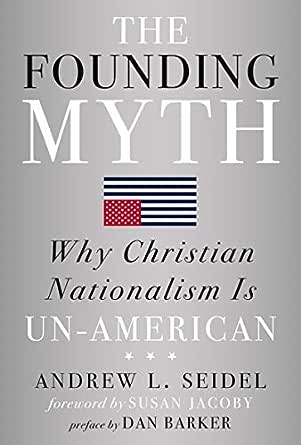 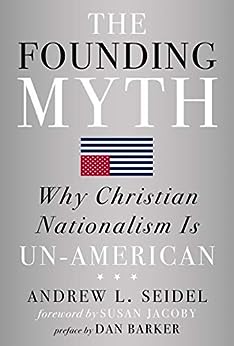 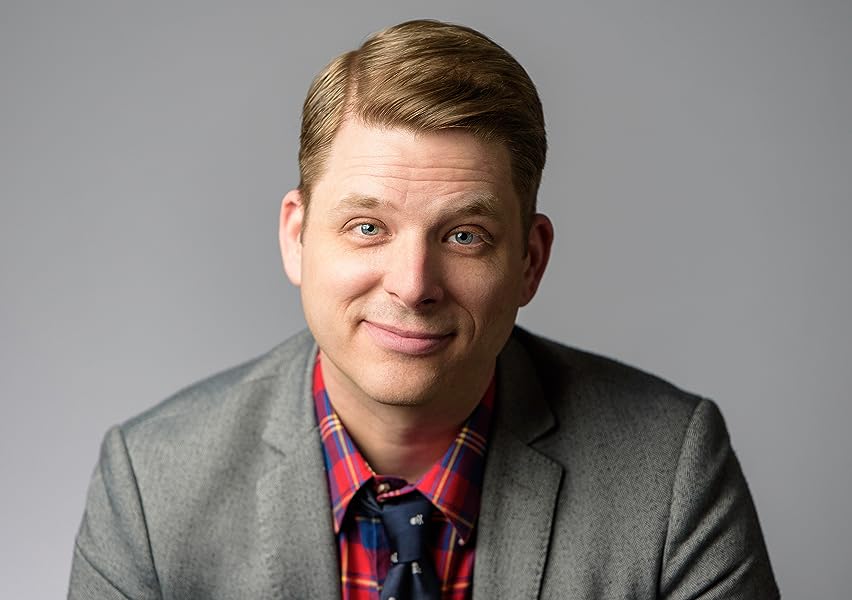 The Founding Myth: Why Christian Nationalism Is Un-American Kindle Edition

"Seidel, a constitutional attorney, provides a fervent takedown of Christian Nationalism in his furious debut. After support by far-right Christian nationalists helped Donald Trump win the U.S. presidency, Seidel worries that Evangelical political influence is increasing and dangerous. He argues that America was not founded as a Christian nation on Judeo-Christian principles, and thus Christian nationalists are inherently wrong. Judeo-Christian principles, he argues, are directly opposed to the Enlightenment principles on which the United States was founded: 'to put it bluntly, Christianity is un-American.' Seidel points out subtle but pervasive Christian theocratic arguments that aim to link patriotism with religion by looking at the history of the 1950s media blitz conducted by Christian organizations promoting religion in American life, the 1954 addition by Congress of 'under God' to the Pledge of Allegiance, and Richard Nixon and Ronald Reagan's use of 'God bless America' as a concluding remark for presidential addresses. According to Seidel, Christian nationalists see Christianity as the foundation of American exceptionalism; Seidel subverts this claim by arguing that democratic freedoms (such as freedom of religion and speech) are what make America exceptional. While many readers who don't agree with Seidel will dismiss his forceful tone, his well-conceived arguments will spark conversations for those willing to listen." --Publishers Weekly

"Andrew Seidel, a constitutional attorney who litigates cases for the Freedom of Religion Foundation, is a powerful muse on this subject. The Founding Myth is an invigorating double-shot espresso that reveals how the original Constitution and the version slathered in religious tomes to serve political purposes are not the same document."--New York Journal of Books

"Seidel is far from the first author to address the historical myths and confusions of political philosophy that sustain Christian nationalism. But no one has written a book quite like this before, because of its sweep, its depth, its viewpoint and its tone. 'The Founding Myth' goes far beyond debunking the false history that Christian nationalists advance to a detailed examination of how biblical principles are fundamentally at odds with our constitutional order." --Salon.com
"One of the best Nationalism books of all time" - BookAuthority

"That something as specious as Christian nationalism has and continues to influence public policy is the reason The Founding Myth, written by constitutional attorney Andrew Seidel, is so important. Ten years in the making, this phenomenal and deftly argued book comes at the perfect time, laying to rest the claim that America is in any way founded on Christianity." --The Crowded Bookcase (thecrowdedbookcase.com)

A conservative evangelical pastor in Tennessee burned The Founding Myth: Why Christian Nationalism is Un-American. Pastor Greg Locke posted a video of the book-burning all over social media. The book-burning made national news. bit.ly/burnTFM

"Andrew Seidel has written a wonderful book that explodes a frequently expressed myth: that the United States was created as a Christian nation. Seidel looks at the history before the ratification of the Constitution and refutes the view that the United States was meant to be Judeo-Christian. He also demolishes the myth that American law is based on scripture, such as the Ten Commandments. In this beautifully written book, Seidel powerfully shows that Christian nationalists are arguing for a vision that is at odds with the essential nature of the Constitution and American government."
--Erwin Chemerinsky, Dean and Jesse H. Choper Distinguished Professor of Law, University of California, Berkeley School of Law.

Andrew L. Seidel works as a constitutional attorney at the Freedom from Religion Foundation (ffrf.org), litigating cases involving religion and the Constitution. He has appeared on Fox and Friends, MSNBC, and TheO'Reilly Factor; numerous radio shows; speaks and writes extensively about religious freedom; and has been profiled on BBC News, BuzzFeed, International Business Times, and more. Learn more about Andrew at: @AndrewLSeidel on Facebook, Instagram, and Twitter.
--This text refers to the hardcover edition.
Read more