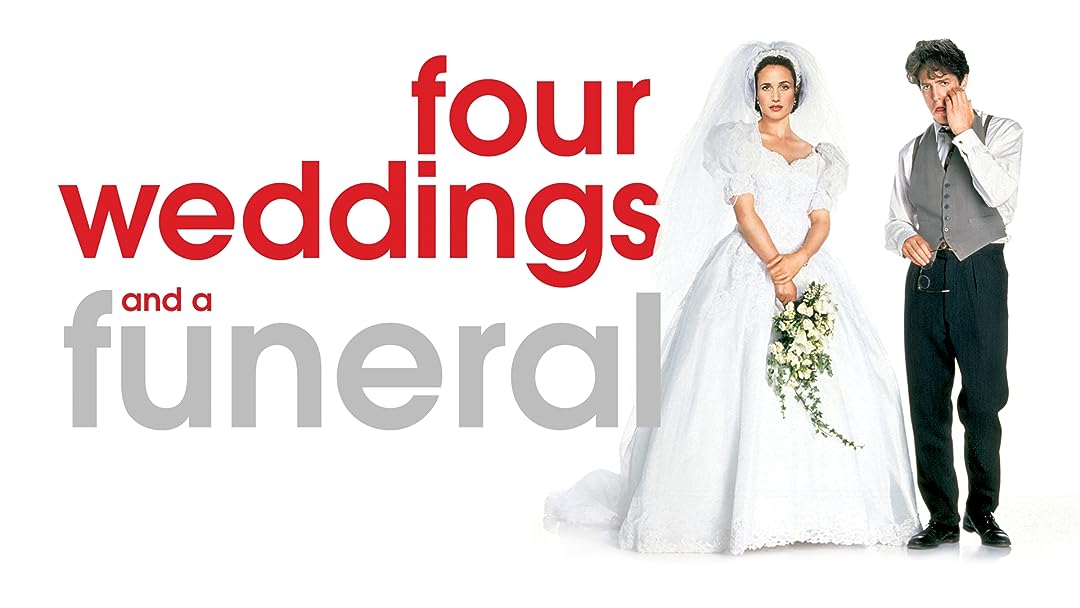 Four Weddings and a Funeral

(37)
1 h 57 min1994X-RayR
A reserved Englishman meets attractive American Carrie at a wedding and falls in love with her, but his inability to express his feelings seems to forestall any possibility of relationship - until they meet again and again.

EmReviewed in the United States on July 20, 2021
4.0 out of 5 stars
supporting cast is the best part
Verified purchase
I watched this when it first came to the theaters and laughed till I cried. The best part of the movie is the relationships between Charles' friends. I can so relate to both Fiona and her brother Tom. Fiona has this tremendous, years-long unrequited love for one of her best friends, and Tom is so terribly socially awkward while being genuinely kind and affable. The biggest negative factor in the movie is the character of Carrie, and the actress who plays her. Fiona's description of Carrie at the first wedding is completely accurate, and it's not an admirable quality. Andie MacDowell can't act her way out of a paper bag, and there's absolutely nothing likeable about her character. There is no chemistry whatsoever between her and Hugh Grant. Andie MacDowell's performance is the reason I'm only giving this movie 4 stars instead of 5. Everything else about this movie is hugely enjoyable. The humor is risque, so don't watch while children are in the room. The funeral scene makes me cry every time I watch it.
4 people found this helpful

Daniel ThomasReviewed in the United States on September 23, 2021
3.0 out of 5 stars
"That would be mice."
Verified purchase
Hugh Grant's character isn't particularly likable and the ending was poor. Carrie's attendance at the last wedding would be sure to wreck it and IMHO that was out of character.

Four Weddings and a Funeral has some amusing moments but overall the film is just all right.

Note- That isn't a typo in my headline.

JCDIReviewed in the United States on November 22, 2021
5.0 out of 5 stars
One of the best ensemble of actors performance(s)
Verified purchase
British people being brits, charming and funny, interesting twists, beautifully photographed. Deep rich acting by all the players, with a real enjoyment as if they all knew how popular this movie would become.
Ideas, love in all its variety, bittersweet moments, surprises.

bailey whiteReviewed in the United States on November 16, 2019
4.0 out of 5 stars
Four stars and a review
Verified purchase
So... You may be wondering: "is this a good movie?" Well, I can't answer that for you, you have to watch it!

But, here are my thoughts. It is predictable, but what do you expect? Hugh Grant's character is great, Carrie on the other hand has some clunky dialogue with off-putting responses to Charles' (Charlie's) (Hugh Grant's) romantic gestures. There could be more dogs in the movie, I only counted one. The true stars of the film are the Hugh's friends. They bring life, laughter, and love to an otherwise desolate hellscape of loneliness and mistake. I like the joke told at Carrie's wedding when Scarlett said her name (which is Scarlett) and the gentleman responded "Red" (indicating he was also named after a shade of color) AND SHE BELIEVED IT AT FIRST. Well his name wasn't red, and I forgot what his name is, but I think it's Robert.
4/5
2 people found this helpful

Quinnlan KingReviewed in the United States on August 19, 2021
3.0 out of 5 stars
"These Hands are, are, Something is missing here."
Verified purchase
So I'll be honest, I-, I'm a sap for these type of films but I must say I disagree with the films form of "form of love". Love is a technicality of a lonesome soul wanting another to cling, cling to something I don't I'm just a lonesome soul planning on dying in the solace of solitude. I do not expect to gain or lose anything or one from nothingness anyway, I'm rambling, I thought it was an alright film I guess I truly feel more sad due to the fil considering I will most likely die desolate, film was boring but okay

Nancy C.Reviewed in the United States on July 8, 2021
5.0 out of 5 stars
four Weddings and a Funeral
Verified purchase
This movie is so sweet. I love all the characters in it. A great watch.
One person found this helpful

M. PecorReviewed in the United States on November 27, 2021
1.0 out of 5 stars
Multiple F-bombs aren't funny
Verified purchase
Anyone who thinks the F-word is funny is juvenile. Quit watching after the 3rd one. Garbage.

10bac10Reviewed in the United States on September 22, 2019
1.0 out of 5 stars
Predictable
Verified purchase
The only scene I appreciated was the Funeral Blues poem by W.H. Auden. Other than that, I find this movie trite and boring. I am finally convinced that I don't care for any movies with Hugh Grant.
One person found this helpful
See all reviews
Back to top
Get to Know Us
Make Money with Us
Amazon Payment Products
Let Us Help You
EnglishChoose a language for shopping. United StatesChoose a country/region for shopping.
© 1996-2022, Amazon.com, Inc. or its affiliates