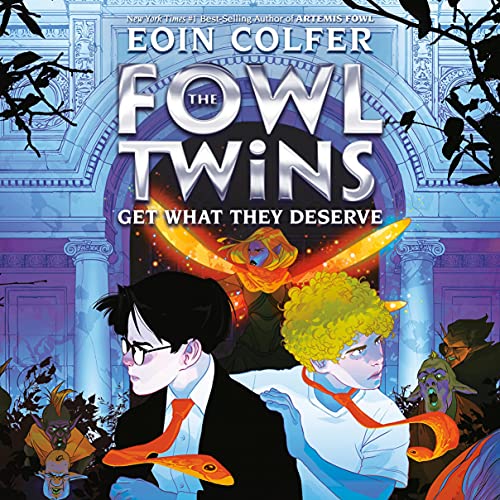 Irish twins Myles and Beckett, Artemis Fowl's younger brothers, return in their third and most bizarre adventure yet.

For almost two years, Lord Teddy Bleedham-Drye, the Duke of Scilly, has been plotting revenge against the Fowl Twins, who humiliated him in book one. Teddy plans to give them exactly what they deserve: permanent death.

He threatens Myles with his weaponized jet, and Beckett and specialist Lazuli succeed in disarming the aircraft and causing an accident that kills the duke. But does it really?

Ghosts, clones, and fairy magic come to play in this ultimate and ridiculous showdown between the twins and their worst enemy.

Complete your middle-grade fantasy collection with these best-selling fan favorites:

Special invitation from Audible!
Learn more about Membership
List Price: $35.00
You Save: $4.37 (12%)
By completing your purchase, you agree to Audible’s Conditions Of Use
Sold and delivered by Audible, an Amazon company
Share

4.6 out of 5 stars
4.6 out of 5
18 global ratings
How are ratings calculated?
To calculate the overall star rating and percentage breakdown by star, we don’t use a simple average. Instead, our system considers things like how recent a review is and if the reviewer bought the item on Amazon. It also analyzes reviews to verify trustworthiness.
Top reviews

bookreader
5.0 out of 5 stars Another Fowlscapade
Reviewed in the United States on November 29, 2021
The Fowl Twins and LEP Specialist Lazuli Heitz are back in another fast paced, action-packed adventure. Lord Teddy Bleedham-Drye is back with a vengeance, and Myles Fowl is the target of his fury. Archenemies are hard to get rid of, especially when magic is involved. In an exciting turn, Myles accidently invents his own fairy-magic-superpower, and it causes a domino effect of disaster. Taking charge, Lazuli, with the help of Beckett, work to lead them out of peril. Lazuli, learns a bit more about her magic and Beckett’s instinctive physicality are spectacular as ever, saving all of their lives on multiple occasions. But their luck is running out, and Lord Teddy is not finished with them. Without their normal resources can they solve this mystery before they fall into a deadly trap?

Eoin Colfer guarantees that there are plenty of surprises, including new characters and some old friends from the fairy world. Readers jump right into the action from page one, and culminates into an exciting end. Filled with the same humorous whit, scientific invention, and fascinating anecdotes as the previous two books. Yes, there is also plenty of toilet humor as well, and mentions of vomit. The science in this book may be a bit dubious, but it is a lot of fun. Myles and Beckett Fowl are their same ingenious selves throughout the book, but learn that they don’t always have the answers. Lazuli also has a bit of soul searching about her past, and the value of her own strength. Together they face their fears in order to ruin Lord Teddy’s evil plans. All ending in a hilarious and crazy mess. This is a great middle grade book filled with magic, intelligence, and unexpected adventure.
Read more
Helpful
Report abuse

Anne R. Marshall
4.0 out of 5 stars Those twins are pieces of work, aren't they?
Reviewed in the United States on November 23, 2021
The Fowl Twins Get What They Deserve by Eion Colfer is a manic book written primarily for young boys who need a lot of motion. It is supremely creative, with plenty of add characters including clones and faeries and such and much, much magic. There is also plenty of science and two twelve-years-olds who have self esteem problems. There is murder and mayhem and lots of shooting, albeit with guns not at all like our own. Myles and Becket are the younger brothers of Artemis and Myles, at least, is in constant competition with his older brother. The have a fairy ambassador/babysitter, Lazuli, who spends an inordinate amount of time chasing after them and rescuing them from themselves, sometimes at peril to herself.

This book is made up of a series of plots, all putting them at risk. This would be an excellent, one-chapter-a-night bedtime story as every chapter has a cliffhanger. Foaly is up to his old tricks, designing new and wonderful equipment for his fairy masters and it is up to Lazuli to test many of them. She is particularly good with testing for resilience and sturdiness. Quite the book for the appropriate audience. Colfer goes above and beyond in creating new and wonderful situations and solutions for his favorite twins. Quite the read!

I was invited to read a free e-ARC of The Fowl Twins Get What They Deserve by Hyperion, through Netgalley. All thoughts and opinions are mine. #netgalley #hyperion #eioncolfer #thefowltwinsgetwhattheydeserve
Read more
Helpful
Report abuse
See all reviews

Andrew B.
5.0 out of 5 stars Fowl twins
Reviewed in the United Kingdom on December 1, 2021
Verified Purchase
Another funny story with Myles and Beckett.
Read more
Report abuse

Karen Woody.
5.0 out of 5 stars Entertaining and fun
Reviewed in the United Kingdom on October 26, 2021
Verified Purchase
Brilliant as usual
Read more
Report abuse
See all reviews
Back to top
Get to Know Us
Make Money with Us
Amazon Payment Products
Let Us Help You
EnglishChoose a language for shopping. United StatesChoose a country/region for shopping.
© 1996-2021, Amazon.com, Inc. or its affiliates