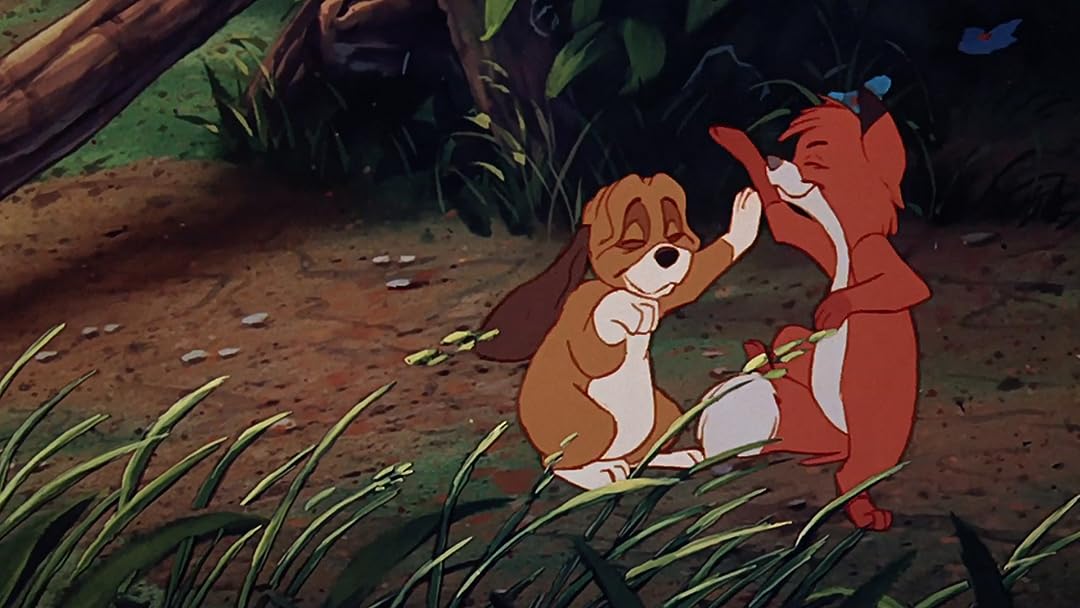 The Fox And The Hound

PhilipReviewed in the United States on January 15, 2019
5.0 out of 5 stars
Best quality version of this film out yet.
Verified purchase
This is my favorite Disney movie and seeing the artistry in this much detail is heartbreakingly beautiful. Most importantly, NO SH*TTY DIRECT-TO-VIDEO MID-QUEL!!!

There aren't any behind the scenes features, but Disney doesn't consider this film a success so there have never been any documentaries made about it. It had a troubled production back in the late 1970s when a majority of the animators that have been around since the 30s and 40s were retiring and young artists fresh out of college were put to work without any prior experience. Also Don Bluth and some other animators resigned from the studio and would go on to rival Disney in the 80s with An American Tail, The Land Before Time, and more. The young artists that worked on this would later contribute the films of the Disney Renaissance.

This blu-ray is essential for die hard fans like me for it's outstanding picture quality, but if you want behind the scenes footage, the closest you'll get is the Illusion of Life TV special from 1981 which can only be viewed on a VHS bootleg on Youtube.

I'm happy with the DVD, it works and is authentic, good seller. My problem is with Amazon, PLEASE stop putting Barcode Stickers or any other kind of stickers on the DVD packaging I ordered this like new or new and these stickers leave ugly sticky marks on the packaging it's not acceptable.

At least use higher quality stickers that don't leave marks on the cases don't be cheapskates!!

KateReviewed in the United States on July 3, 2017
5.0 out of 5 stars
Always a Tear-Jerker
Verified purchase
So, I hadn't seen this movie in a little while and yet I knew it was going to make me cry. I love the movie, don't get me wrong, but I cannot watch it all that often. Maybe (and that's a strong word there) once a year. Well, when I watched it recently I still wound up crying. I made me fiance watch it with me and he couldn't believe how quick the water-works started. Such a wonderful movie! The emotions I felt are well worth it!

If you need a good tear-jerker - This movie has you covered!
8 people found this helpful

Kimberly J. RichterReviewed in the United States on June 3, 2014
5.0 out of 5 stars
Wonderful animated film
Verified purchase
The Fox and The hound was one of Disney's most greatest classics ever. This is a disney flim you should see. The songs are simple,but easy to follow and the story is amazing.

Summery-The fox and the hound starts of when a female fox is trying to save her cub. She saves her son,but gets killed by a hunter. A owl named big mamma helps the cub and a kind old lady named widow tweed adopts the fox. She names him tod. A hunter named Amos slade got a puppy named copper. When Tod and Copper met,they become best friends. Their friendship is broken when copper leaves on a hunting trip. Tod is all alone. When copper returns,he is a hunting dog. Chief,Amos slades other dog attacks tod. Copper has no choice but to chase tod. Copper lets him go. But chief gets in a accident. Copper blames tod. Their friendship is gone. Tod is in a dangerous world because now coppers after him....

Message/Lesson-Friendship and love. You can be friends with anyone. No matter what,friendship lasts forever. Love is also important. Love starts when two eyes met. The same happen when tod met vixy. Once tod saw vixys eyes,he fell in love.

But this moive is awful sad. Killing and shooting is in it. But don't worry. There is no blood and there is no dead animals. It's off scean. Maybe ages 3 and up will be good. But I am WARING you. I have seen this moive plenty of times. This moive can make some cry. The touching moments make some cry. But the violence isn't to bad.

This moive has family fun and will be a good choice. If you are looking for a kids moive that teaches lessons and is appropriate this is a moive for you. This is a true masterpiece.
5 people found this helpful

Michael Patrick BoydReviewed in the United States on September 11, 2013
5.0 out of 5 stars
Great fight scene
Verified purchase
The Fox and the Hound is one hour and twenty - two minutes and was released in theaters on July 10, 1981. The story is a about a fox named Tod and a hound dog named Copper. As youngsters they start out as friends, but when they become adults their friendship is tested when Chief, another dog, falls from a railroad bridge and is injured. Copper vows to go after Tod and kills him because he blames him for Chief's broken leg. The main climax in this movie is when Amos Slade, Copper's owner, and Copper go hunting after Tod and run into a three hundred pound black bear. Just as the black bear is to kill Copper, Tod comes to rescue his friend. You can guest the rest of this movie. The Fox and the Hound have a few lasts in it. This would be the last movie to have all of the credits in the start of the movie and to have The End at the end of the movie. Also this would be the last time that Frank Thomas and Ollie Johnston (two of Walt Disney's Nine Old Men) would work together. The Fox and the Hound is an excellent movie and gets an AAA+++.

I. The Lion King
II. Return of Jafar
3 people found this helpful

Kirk ArizonaReviewed in the United States on March 17, 2016
5.0 out of 5 stars
Great movie if you can just get the kids to sit still.
Verified purchase
This is a classic Disney movie that all kids will love, at least my kids. We had some of the of the neighbor kids over and since it was not computer animation they did not sit still for long. We don't blame that the kids didn't sit still on the movie. We blame it on the world that creates kids that have loud graphics and music to get their attention. We don't mean to be harsh. We just wanted the kids sit still for a minute to watch this movie and enjoy the story.

Next time the neighbors are in the minivan, we are going to turn on the movie in the van and make them watch it on the way to school.
5 people found this helpful

SusanReviewed in the United States on May 31, 2020
3.0 out of 5 stars
cute story but..
Verified purchase
In trying to be PC and bring up our grandchildren that way, this was violent. We turned it off and did not watch after the first gun and shootings occured. Sorry, Disney...It seemed ok about 25 years ago, but not in our world today.
However, I gave it 3 stars for artistry, colors and music.

Jess GonzalezReviewed in the United States on September 6, 2021
4.0 out of 5 stars
Yup yup
Verified purchase
The Fox and the Hound never failed to make me cry this film is worth buying although it has the second movie which is terrible that’s why I gave this review 4 stars bc of the second movie that should have never been made but anyways it came with one disc and still glad to have it
See all reviews
Back to top
Get to Know Us
Make Money with Us
Amazon Payment Products
Let Us Help You
EnglishChoose a language for shopping. United StatesChoose a country/region for shopping.
© 1996-2022, Amazon.com, Inc. or its affiliates