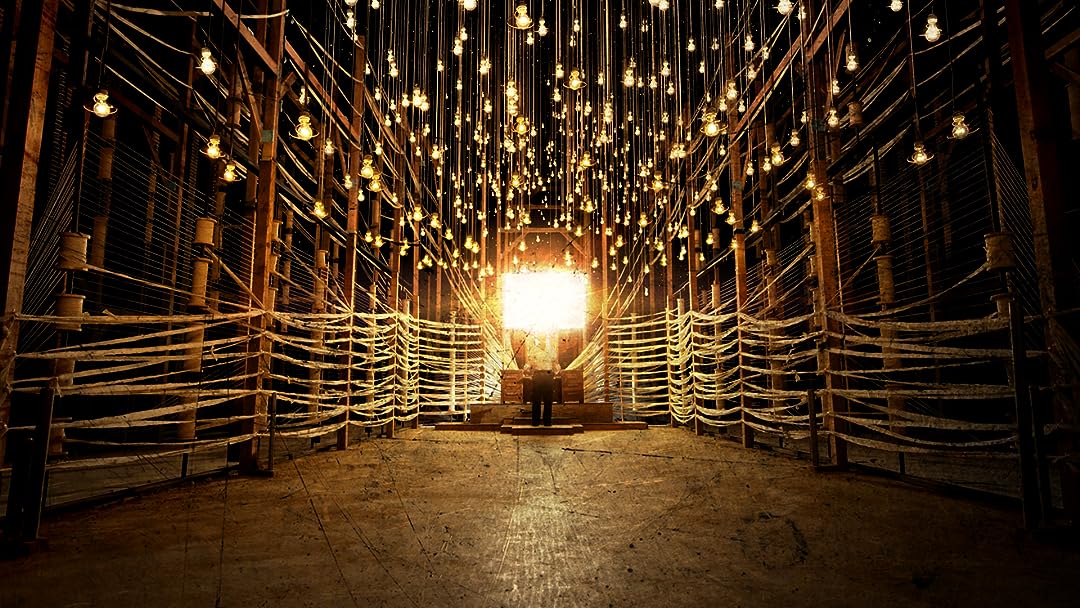 (1,199)
6.62 h 6 min201413+
From Jamin Winans, writer and director of the cult smash hit, INK, comes a mind-bending science fiction thriller about two strangers who find their lives colliding in an impossible way.

MarkReviewed in the United States on February 22, 2019
3.0 out of 5 stars
Should have been a short story.
Verified purchase
This would have made a great episode of The Outer Limits. But, for having 2 hours to get there, I feel the ending was Deus Ex Meta to an extreme degree. The last portion of the film was so drawn out, I couldn't help but laugh out loud as things got more and more absurdly contrived.

Some reviews are wildly interpreting this movie's meaning(s), which reminds me a lot of David Lynch, or Lars von Trier, which is to say--"There is no master plan, so please interpret my paint splatters on the wall." When someone says "a movie that makes you think", they don't mean: "So abstract that you have to make up the story yourself." Once the big reveal happened, the movie stalled on that point, and dwelled, over, and over. Anyway, ranting.

This movie held my interest until the last portion. Its entertaining enough. I suggest you watch, and if you find yourself scoffing at the last third, you can sit next to me.

Bianca BefanaReviewed in the United States on January 10, 2018
5.0 out of 5 stars
The Frame is Well Framed!
Verified purchase
This film requires a 'thinking/open' mind. Otherwise don't watch it. If you fall into the former category, this film is more than just science fiction. It's creatively compelling & poignant, giving you the opportunity to adjust your own life or reality by exploring it with a different outlook. Excellent performances by the actors & the director really timed each 'frame' significantly. Suggest you watch it more than once & you'll notice other subtleties in the movie. Really enjoyed this indie film. Predict it a 'cult classic' for people with questioning minds. Bravo!
33 people found this helpful

AVaussiReviewed in the United States on May 15, 2017
5.0 out of 5 stars
I am in love with the writing of Jamin Winans
Verified purchase
I am in love with the writing of Jamin Winans! I fell head-over-heals with Ink, and then again with the Frame! This writer truly has a gift. He captures the beauty of love and redemption with such emotion! I was brought to tears with the vulnerability of the characters in the stories. Never before have I ever watched artistic filmmaking like this. I absolutely cannot wait to see what he brings to his audience next! His films will challenge and inspire you! Have you ever watched an emotional story or read a book that stays with you? His artistic ability to capture the raw beauty of love and redemption will inspire hope to believe in second chances....in the ability to choose to just let go of the destruction we cause ourselves by allowing the hurts and shames of our past to enslave and cripple who we were created to be. It will brake the defenses of your heart and unravel your emotions if you give it the chance.
21 people found this helpful

Gary H SchultzReviewed in the United States on January 21, 2020
4.0 out of 5 stars
Wild Interpretations, or a more evolved imagination?
Verified purchase
I gave this Four Stars because they don't have a choice of 4.5 --- (Not that Four isn't great, bc it is, but IMO Five has got to be noticeably close to perfect).
So, yeah, I loved this film. Watched it twice and got substantially more out of it the second time. Which is why I'll watch it a third time, and based on the results, will decide if it's worth another viewing. It's a beautifully played chess game, piano concerto, chip shot, brush stroke --- for those who are blessed with highly imaginative minds. Not everyone is. Doesn't make you a bad person if you're not. In fact, you probably have other blessings that are more unique to you.
Everybody is different. That's a good thing.
IMO, Kudos all around: Acting, Writing, Direction, Music, Editing, and all around excellent best efforts under the circumstances by all the creative and supportive staff. Brain-Stretchingly Imaginative!
IMO some reviewers, who apparently are less versatile "imagination-wise" than others, didn't vibrate at the same frequency as the writer/director/cast "imagination-wise" and subsequently cried "jibberish," to which I cry "rubbish."
Even a cursory investigation of the facts will reveal that said reviewers' Opinions are mired in their own often false assumptions ("When you Ass U Me...") with Imaginations encased in a sarcophagus of Hubris that smothers their own Intuition and Tolerance. And I say that with love and compassion, bc no one should suffer.
But also seriously, why doesn't someone invent and profit from creating the basic technology to allow all of us (public/consumer reviewers)
to "Drag" the Color Into the Stars to the degree that they prefer
(from the pre-determined choices of: "Empty, one-third, two thirds, Full")?
Amazon can afford the IT & Bandwidth, right JB? And it would be a more gratifying experience for their customers (us).
just sayin'
One person found this helpful

Binky ChottorrhœhiaReviewed in the United States on May 12, 2015
5.0 out of 5 stars
Powerfully realized allegory of "Urban Hope" and despair
Verified purchase
To me, this is a fully realized piece of art. I went in knowing solely that it had a decent Amazon rating and was made by some of the same folks that made Ink, which blew me away at first, but whose apparent brilliance waned as I watched it a second time.

What I saw here is exactly what I wanted: some of the same themes, but not all; more risks, deeper exploration; something that got at that labyrinthine complexity that arises in movies where the border breaks down between fantasy and reality.

I honestly don't think it's much of a SPOILER to reveal that once you're done with this movie, you don't exactly feel like you've been proselytized to, but you will have got as big a dose of basically Christian religion as you would get from reading/watching The Lion, The Witch & The Wardrobe. While I'm not opposed to that, it's also not something I associate with films I enjoy. But for many reasons, I enjoyed this film and its take on the questions of religion and philosophy, it tackles with a nuanced blend of playfulness and seriousness which, maybe most of all, is what distinguishes this film as a genuine work of art, and at the same explores the subject of free will and creativity in a way that makes it exactly the sort of picture I love.
19 people found this helpful

If you can look at a blank canvas and consider it an art masterpiece, or if you enjoy the idea of a completely bad LSD trip then this is your movie. If however at some point you require something in the story to make some semblance of sense then AVOID THIS AT ALL COSTS.
4 people found this helpful

Frank BaranskyReviewed in the United States on September 27, 2019
5.0 out of 5 stars
TV As a Window on the Soul
Verified purchase
More cerebral than many would like if it's escapism and action you're expecting here. But definitely thoughtful and substantive parable of human guilt and redemption. From the get go we are invited not only into the activity of Alex and Samantha but also into their interior struggle as they ultimately deal with their past. Samantha religiously watches the weekly TV drama "Thieves and Saints" where Alex lives out on the one hand his life of crime and contrastingly devotion to his adoptive father, and Alex finds the themes of "Urban Hope" in which Samantha tries to make a positive difference in her work as an EMT a marked contrast to his own divided heart. It's this electronic connection that "Frame" explores----and the struggle to engage in face-to-face involvement rather than be content with keeping the uncomfortable truth at arm's length by wavelength and storybook. The marvelously abstract musical score enhances the dimension of the confusion and mystery that prompts us to consider that this film is meant to spark serious reflection on the human condition even as it proposes in the end that there is a price to be paid for happiness. Religion is not applied heavy-handedly as well it might be given the subject and, at the hands of a lesser writer, clumsily summoned. Instead it appears quietly and profoundly on the lips of Alex's dying adoptive father in one thought-provoking line that is once repeated toward the film's end. Again, another indication that this film was carefully wrought. With effort and imagination much can be mined in meaning in this film which is rich in symbol, but it can also be appreciated by just engaging the characters as they experience life. I believe the closing 15 minutes would benefit from some editing, but otherwise, a sterling film for those who would take the time to absorb it.

D. krusoReviewed in the United States on February 23, 2017
5.0 out of 5 stars
WHAT A motion PICTURE [ pun intended ]
Verified purchase
WOW !!! amazing follow up to INK. if you thought ink was interesting but got lost in the multiple layers give this a try. soundtrack is very similar to INKs. it lists itself as a science fiction flick. but it is more a fantasy with elements of FATE and DESTINY tossed into the mix. slow moving to begin with but once the strangeness sets itself up you will be glued to your set. CANNOT WAIT TO SEE WHAT HE DOES NEXT !!!
16 people found this helpful
See all reviews
Back to top
Get to Know Us
Make Money with Us
Amazon Payment Products
Let Us Help You
EnglishChoose a language for shopping. United StatesChoose a country/region for shopping.
© 1996-2022, Amazon.com, Inc. or its affiliates