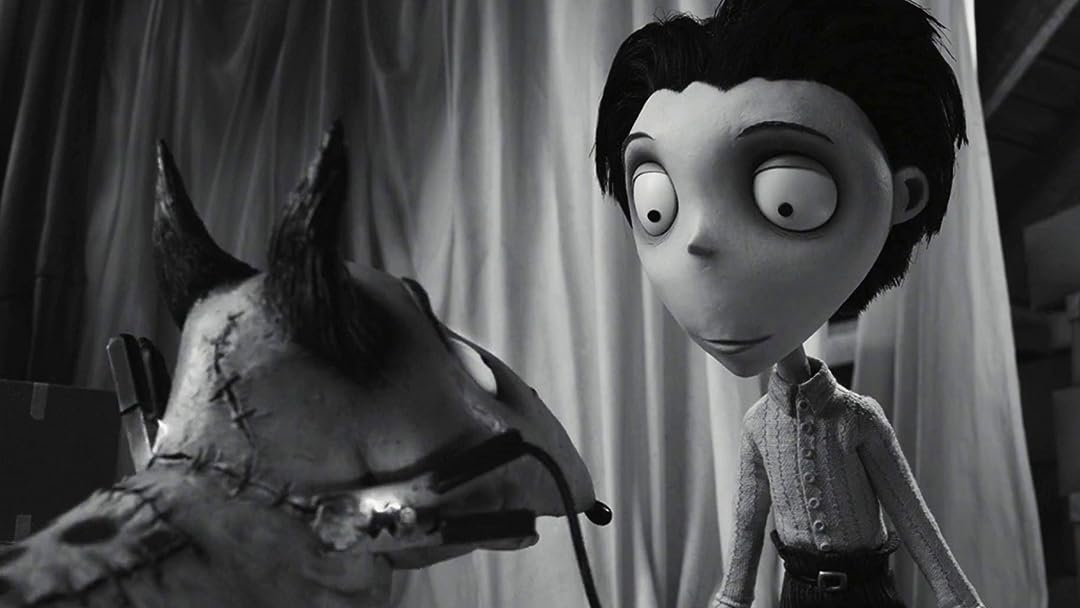 K SimpsonReviewed in the United States on September 17, 2022
5.0 out of 5 stars
Best family Halloween movie ever!
Verified purchase
We are showed this for a community movie night with the local police department here and it was a huge hit with all ages🎃

Robert A. DaltonReviewed in the United States on March 31, 2013
5.0 out of 5 stars
Tim Burton scores a home run with this film!
Verified purchase
When Tim Burton does something original, and not just a re-make of someone else's idea, it can make for a truly great and original film as is the case with Frankenweenie.

This wonderful film is a homage to the low budget horror and science fiction "B Films" of the 1950 and 1960s such as Dracula, Wolfman, the Mummy and Godzilla.

Tim often displays a macabre sense of humor and that can be seen here in this film as it was in Corpse Bride. If you love Corpse Bride, as I do, you will love this film for the same reasons. The characters here are engaging and the storyline for the most part is very well done, although there are a few missed opportunities for character development and interaction such as with Victor and the neighbor girl.

From a graphic and technical perspective this film will also not disappoint. The graphics are extremely clear and crisp in blue ray, even though they are in black and white or shade of grey, which is very appropriate to the feeling and atmosphere of this film. The sound is also excellent as well and Danny Elfman's score is darn good and very appropriate to the film as well.

The only negative point in this film for both my wife and I was the all too Disney style ending. I don't want to spoil it for you so will leave it up to you to see what I mean.

I for one hope Tim will continue to make animated films of this caliber and not re-trench back to doing re-makes of other peoples original films as he did with Planet of the Apes, Charlie and the Chocolate Factory and Alice in Wonderland. While they were interesting films they were not great as Frankenweenie is.

Highly recommended - especially to you Baby Boomers out there!

Underground RebornReviewed in the United States on September 6, 2013
5.0 out of 5 stars
A Tim Burton Classic
Verified purchase
Tim Burton is responsible for some of the most amazing films in history. His blend of spookiness and heart has given us some of the most amazing stories and memorable characters. Let's not forget one of the greatest actors of our time in Johnny Depp. Now after almost years of story telling Tim Burton is proud to finally give his fans a full length version of his cult classic short film 'Frankenweeie'

It is the simple story of a friendship between a boy and his dog and how far you would be willing to go to keep someone close to you for the rest of your life. While this film does take from many elements of classic Hollywood monster films the heart is over abundant in this film. I will say this, Sparky aka Frankenweenie is the greatest of all Disney dogs thanks to this film. The story is so heartfelt and everything in this film makes it so wonderful. The stop motion animation, the Danny Elfman score and the classic black and white make it all the most visually stunning and memorable. It has a great cast, some Tim Burton favorites including Winona Ryder & Catherine O'Hara and of course the menagerie of house pets that each have their own unique personality.

I will say that I was a little upset that this film didn't win best animated feature at the Oscars. Still, that won't prevent people from seeing this wonder of a film. I am so glad that after all these years this film has finally been made and they couldn't have picked a more perfect version than stop motion. If it wasn't for 'Edward Scissorhands' and 'Sweeney Todd', 'Frankenweenie' would probably be my all time favorite Tim Burton film to date.
One person found this helpful

I is shoppingReviewed in the United States on March 28, 2022
5.0 out of 5 stars
Small kid level spooky
Verified purchase
Just what I needed to segue into fall. Find the kid within to watch.

Pumpkin TossReviewed in the United States on August 8, 2014
3.0 out of 5 stars
What you should know about this film
Verified purchase
I can't say I love this movie, but I can't say I hate it either. It certainly is better then the original Frankenweenie Burton made back in the 1980's. Basically, the story is a spoof on the traditional Frankenstien story...and The Bride Of Frankenstien movie.
(1) The entire movie is black and white. Personally, I have no problem with this, but there are some people who can't watch black and white films. Most of Burton's movies have the black and white flavor, but with other colors included..where as this movie it's just black and white
(2) If you are fine with watching a movie about a re-animated dead dog, then you should not be shocked/surprised by much of anything in this film.
(3) SPOILER ALERT: One part about this film that I did love was the over all message about science being misunderstood, and that just because we use it (going against the cultural norms) in unusual ways, does not make it bad. Most monster style movies/ Frankenstien movies the overall message is usually that of "Oh, we should never have played God, because it is wrong" (referring to science distorting the world/ being evil). However, that is not the message in this film. In fact the message is about science being misunderstood. In the end the dog dies again, but the boy brings him back from the dead, again. However, this time the town people are fine with it, and there are no messages of science being the bad guy. HOWEVER, there is the message of be careful how you use science, for it can be destructive (I refer to how the other school children use it).
(4) The movie is not action packed, or adventurous. It can be a little slow moving at times, so don't watch it with expectations that it'll be wildly entertaining. It is not. It can be entertaining, but in a more subtle/ softer way.
(5) It is not a musical
(6) One scene that might be disturbing for some is at the end an evil bat cat creature is killed/impailed. It's not bloody, but I was a little surprised by it.
(7) My biggest concern throughout this entire film (because it can be sad at times) WAS that the re-animated dog was un-happy, and that the best thing for it would be letting it just die (tear jerking ending). However, this is not the case. SPOILER ALERT....In fact, the dog is fine, and happy by the end of the film. Personally, I was grateful about this. Usually in animal movies they kill the poor animal off. I am glade that this movie had a happy ending.
One person found this helpful

Amazon CustomerReviewed in the United States on February 9, 2022
5.0 out of 5 stars
Great video
Verified purchase
Very nice video loves the extras that tell about the making of the movie. High quality video.

HeavyMetalSushiReviewed in the United States on January 3, 2013
4.0 out of 5 stars
Classic Tim Burton
Verified purchase
In light of Tim Burton's reimagining of his classic Frankenweenie, I felt maybe I should come on here and rate the classic film. I have no idea yet whether or not the classic short will be on the DVD/Blu-Ray of the new Frankenweenie, but either way, even though I have no VHS player, I will likely hold onto this VHS anyway...if nothing other than for nostalgia, being a Tim Burton fan & all.

I have enjoyed Tim Burton films since I was just a kid, and this was among the first of his films I ever saw as a kid, aside from Beetlejuice and Edward Scissorhands. The rest is history. I own the general majority of his works, between DVD and Blu-Ray. The original Frankenweenie is likely the only VHS I own, other than my wife's many classic Disney VHS tapes.

I won't waste my time going into what this film is about, because undoubtedly you have an idea if you're familiar with the new one, or have likely read the description on this movie's page. It is only near half an hour long, but it's an entertaining and enjoyable half hour. An fun little homage to Frankenstein that all ages could enjoy. If you have never seen this before, pay the small amount to watch it here on Amazon, and then of course do see the latest reimagining of it afterwards as well, if you have not already.
One person found this helpful
See all reviews
Back to top
Get to Know Us
Make Money with Us
Amazon Payment Products
Let Us Help You
EnglishChoose a language for shopping. United StatesChoose a country/region for shopping.
© 1996-2022, Amazon.com, Inc. or its affiliates