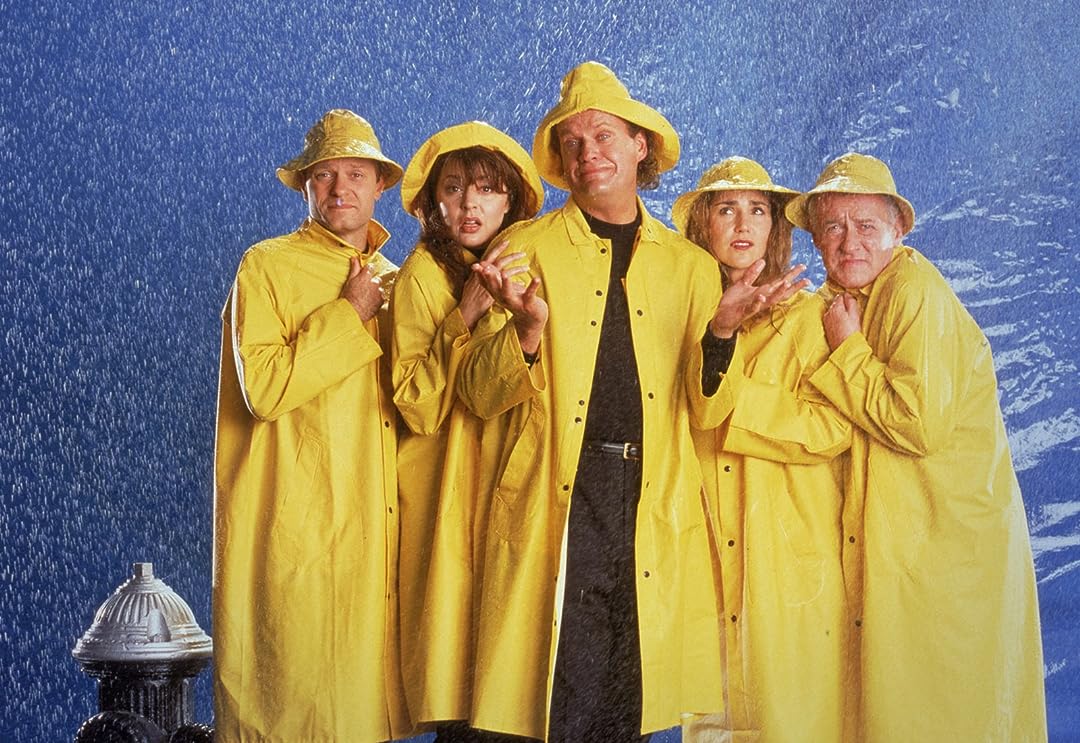 (3,086)8.11994X-RayTV-PG
This eponymous series begins with neurotic "Cheers" shrink Frasier Crane (Kelsey Grammer) leaving Boston and surfacing in Seattle as a radio host, with his retired dad (John Mahoney) as his roommate and his uptight brother, Niles (David Hyde Pierce), living nearby.

GoodEggReviewed in the United States on March 3, 2020
5.0 out of 5 stars
A 90's classic
Verified purchase
I was bummed when Netflix pulled this series, so I broke down and bought the first season though I know that eventually I will buy them all. If you're not familiar with Frasier, and even if you are, there's nothing much to say except that this was one of best of 90's situation comedy. Sophisticated yet funny despite the network television stereotyping. This applies all the way though the entire eleven years. Season 1 is only held back by the inevitability of new character development, but the comedic timing is still spot on.
16 people found this helpful

RayReviewed in the United States on November 20, 2012
5.0 out of 5 stars
One of the Most Consistently Hilarious Shows Ever Seen
Verified purchase
If you are looking at reviews here, you've already seen that there are currently over one hundred reviews for Season One of "Frasier," and you doubtless noticed that the overall summative rating for the show is nearly a perfect five stars. That's pretty rare, but it demonstrates what most people say about this show, and it's what I, too, have discovered myself as I've been reintroduced to the Frasier on these disks.

I can't add much "substantive" content than what others have already written, but I'll just pitch in a few of my own comments, for whatever they may be worth. "Frasier" is simply hilarious, so hilarious (a word frequently overused, but I assure you, correctly used in this case) that you will find yourself having to stop the disk because you're doubled over with laughter. It's an example of that rare combination of a unique set of actors, superb script writing, and a great story concept. I've seen a lot of shows in my life, and I was completely convinced that no one would ever "top" "The Dick van Dyke Show" because it set the bar so high), but I would have to say that this one is right up there with some of the very best ever made. As I write this, I'm thinking of some of the lines from Season One that simply had my CRYING with laughter, and I so wish I could share them here, but that would just spoil the experience of watching them yourself. Also, the humour does not come across in writing as powerfully as the production itself provides it.

Frasier is a psychologist in Seattle who has a call-in talk show for helping listeners with problems. His brother, also a psychologist, but with a more traditional practice, also lives in the city. Their father, a retired policeman, lives with Frasier in his somewhat upper-middle class ("The Elliot Bay Towers, on the Counterbalance") high rise apartment. They have a live-in physical therapist, Daphne Moon, who is there to help Frasier's dad with his hip problem (who was injured by a gunshot wound while on duty and retired as a result). Frazier has a producer, Roz, a young woman who is always trying to find "Mr. Right," but doesn't seem to be very successful in doing so.

Sound boring? Trivial? Of no interest? Unoriginal? Yes, that little description above might sound that way, but I can assure you, once you waded into the very first episode (one of those rare exceptions where the pilot is actually as good as the rest of the show: this thing starts right on Episode One), you'll see the reason why over 100 people rate Frazier with essentially a perfect five-star score. The fun starts on the first episode and doesn't let up from that point.

Frasier is one of those shows that requires you to think a little as you watch in order to catch all the jokes (it's a tad like "The Simpsons" in that aspect, although the two shows bear no similarity). And you have to listen "quick": the witty interjections that make up so much of the comedy can come at a blisteringly fast rate. Sometimes the interjections will catch you completely off guard, and it is some of these lines that will just knock you over with laughter.

"Frasier" is a show that indeed requires you to think, but it pays off in spades. The show does not "reach down" to a low common denominator, as we see in so many comedies. If you like witty dialog, strange situations, and enjoy seeing how humanity intersects with humor, this is the show for you. The show assumes an educated audience, and that is that.

An easy five stars, but you already know that.

ADDENDUM:
After re-watching all 11 seasons of this show with my wife numerous times, I can still say it. This show is hysterically funny. When you are new to it, you get "caught" by the verbal gags and you'll have to stop the disk or you'll miss then next three jokes. Witticisms abound. Obscure references are not uncommon. And the fact that they could hold this up for 11 years is remarkable. It is said that the only reason that it did not keep going is because of the cost involved due to the very, very high salaries of the cast, and Kelsey Grammer may or may not have been the longest playing single character in TV history (spanning three shows), but none of that matters. We may be sad that we missed out on what unquestionably would have been another hilarious Season, but I guess we'll have to be content with 263 episodes. And do you know what is even more miraculous? As incredibly good as this show is--and it truly is--the show does not even showcase Grammer's greatest acting achievement. That achievement doubtless lays in "Boss," a two-season show on Starz that anyone who grew up in Chicago will cleave to, and everyone else will be mesmerized by the performances ([[ASIN:B005S97ULU Boss - Season One]] and [[ASIN:B00B2TU1R0 Boss - Season 2 [DVD]]]).

Paul CarruthersReviewed in the United States on July 11, 2017
5.0 out of 5 stars
Seattle, we love you...
Verified purchase
I'm not sure why I procrastinated for so long about buying this show on DVD. I always enjoyed it during it's initial primetime run and afterwards watching many late night repeats. So, I finally bought the complete first season & I was not disappointed in the slightest. Just as funny now as it ever was. Great cast, brilliant writing, and it's hard to pick out any one or two episodes as a favorite--they were all funny.

Some more than others obviously, but the good doctor and his great supporting cast always bring a good time. Here's to Season 2 and a whole lot more...
5 people found this helpful

ZellaReviewed in the United States on September 11, 2017
5.0 out of 5 stars
One of the Best Comedys Ever
Verified purchase
Love every season of Frasier. It stands the test of time and is still just a great as it was when it first aired. David Hyde Pierce steals the show as Niles Crane, with his retorts to his pompous, know-it-all brother, Frasier.
4 people found this helpful

Epistem QuestReviewed in the United States on March 23, 2012
5.0 out of 5 stars
My Favorite Television Show
Verified purchase
I don't watch much television. I also tend to be a latecomer to a television series. I watched "Frasier" from time to time when it originally aired, but it wasn't until this past year that I really started to take a serious interest in the show. I have always enjoyed humor based on a psychological premise. I particularly like neurotic characters. For those reasons, shows like "The Bob Newhart Show," "Monk," and "Frasier" hold a special appeal for me. I thought I would start buying seasons of "Frasier," and I'm glad I did. What a great show!

I really admire Kelsey Grammer's comedic skills. His timing, his delivery of lines, his sensitivity, and even his diction, are truly exceptional. He brings the character of Frasier to life. I can't picture anyone else playing that part.

The actors are right in character from the first show. I think Martin Crane is a bit too gruff in the first couple of episodes. On the other hand, it was probably necessary to establish the underlying tension between Frasier and his father. Martin softens a bit after the first few episodes. I think the writers and John Mahoney found just the right amount of tension to present to the audience each week.

The episode "Author, Author" is a real gem. Niles and Frasier decide to write a book together. Their insecurities manifest themselves---the ones that go all the way back to Niles's crib. Another gem is entitled, "Frasier Crane's Day Off, "which is about Frasier being too sick to go to work. Of course, he comes to work with a fever, and, well, you can guess how he acts on air. Finally, I enjoyed the season finale entitled, "My Coffee with Niles." It is an episode that finds Frasier trying to decide if he is happy or not. Many emotional twists and turns occur in that episode, but in the end he has an answer to that question.

There are good interviews with the cast members included in season one. Also, there is an interesting segment dealing with the set of Frasier's apartment.

Princess LReviewed in the United States on June 14, 2016
5.0 out of 5 stars
A great comedy
Verified purchase
Even though this show is from the early 90s it still holds up really well. The entire cast is always on point and the humor is just hilarious. I had completely forgotten how much fun this show was to watch until I finally caught it on Prime. If you liked Frasier on Cheers then you'd definitely want to check out this spin-off. His humor is pretty much the same, except instead of a bar setting it predominantly takes place in either the recording booth for his show or his swanky apartment, and it revolves mostly around his interactions with his his father and brother.

PSReviewed in the United States on April 9, 2019
5.0 out of 5 stars
NEVER FAILS to PLEASE !
Verified purchase
After more than 20 yrs. I peeked into the first season of Frasier. OMG. The cast is brilliant and never fails to entertain. At the time of its original running, due to my own personal shortcomings, I was not a dog lover, much like Frasier. Luckily my life has turned and discovered why we call them "Our Best Friends". Eddie is adorable. Just like mine!
See all reviews
Back to top
Get to Know Us
Make Money with Us
Amazon Payment Products
Let Us Help You
EnglishChoose a language for shopping. United StatesChoose a country/region for shopping.
© 1996-2021, Amazon.com, Inc. or its affiliates