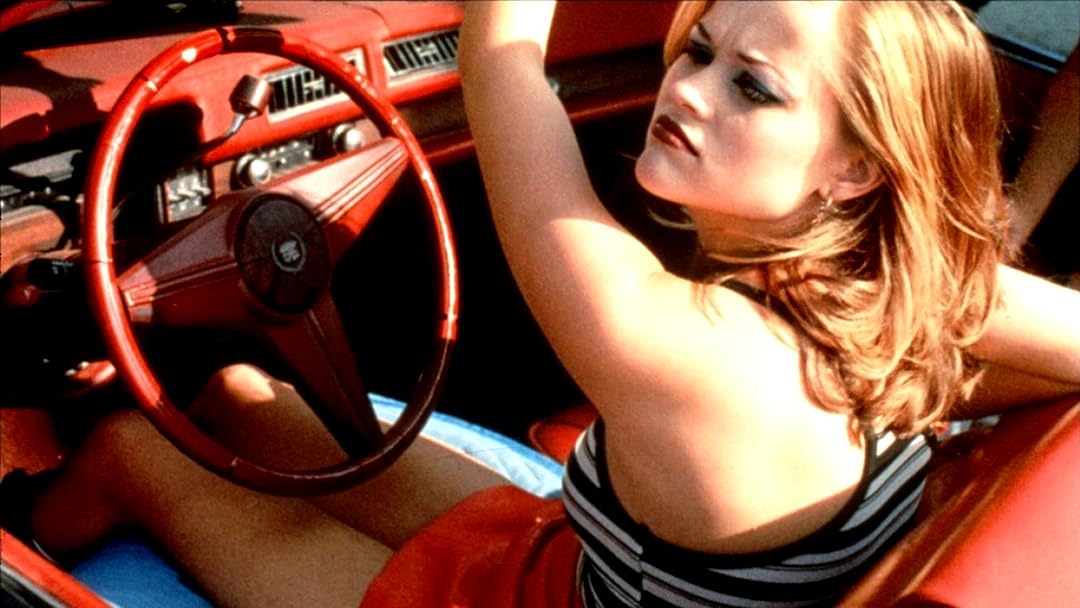 (1,189)6.81 h 41 min1996R
In this twisted take on 'Little Red Riding Hood,' a teenage juvenile delinquent (Reese Witherspoon) on the run from a social worker, travels to her grandmother's house while being hounded by a charming, but sadistic, serial killer (Kiefer Sutherland).

Sarah SiladiReviewed in the United States on September 6, 2017
5.0 out of 5 stars
Campy, Dark, Hilarious and Still a Feel-Good Film
Verified purchase
In 1996 Reese Witherspoon was not yet a household name (pre- Legally Blonde) and Keifer Sutherland hadn't had a decent role in years. Brooke Shields was underemployed and Brittany Murphy was still alive and not yet a walking skeleton. They are all in this film.

Yes, it is campy. No, it is not a rom-com that Reese has become nearly synonymous with but it is hilariously dark. I loved this movie back then and just watched it again for the first time in more than 15 years. The movie is nearly 20 years old but its awesomeness stands. The teenage me loved it so much I had my own VHS copy and the 20 years on me couldn't watch it without writing this review - As long as you don't click 'Play' expecting a "Reese Witherspoon movie" you will not be disappointed

Anony MouseReviewed in the United States on August 10, 2019
5.0 out of 5 stars
Reese’s (best) piece
Verified purchase
If this film taught me anything practical, it’d be that being bat shxt crazy can be a life saver if I ever got into a female detention center. ;)

I’ve had this dvd for 15 years. It is still on rotation. Reese in real life seems to share quite a bit of Vanessa (type A, feisty, straight shooter, talk first think later etc.). She was a teen at that time. It’d be difficult to play Vanessa if she was a polar opposite. Reese at times reminds me the character Scarlet O’Hara, both rely on animal instinct to function. I wish she’d have another worthy role to play that’d be more Vanessa Lutz than Legally Blonde.
7 people found this helpful

AdamReviewed in the United States on May 7, 2021
5.0 out of 5 stars
I liked it! A sure thing film for fans of female revenge movies!
Verified purchase
In Freeway Reese Witherspoon really shows us that she can play kickass white trash as well as a sweet girl who gets the guy. **Spolier** Reese plays Vanessa who after her mom and stepdad get arrested, plans to go see her paternal grandmother who she has never met. In a red mini skirt and with a picnic basket as a suitcase Vanessa heads to the trailer park. On the way her car breaks down and she hitchhikes. She is picked up by Bob (Keifer Sutherland) as the super creepy guy who we soon learn is the I-5 killer that had been on the news. Little does Bob know that Vanessa can fend for herself! When he tries to kill her she fights back and well....you just gotta watch and find out...trust me, you won't regret it.. Brilliant writing, it is funny and smart a great commentary for our reality-tv addicted times. This is not for everyone, there is a lot of violence, adult language and themes. But it is a great social satire that should be added to any serious collector's library. highly recommended and surely one of my favorite movies.
One person found this helpful

Barbara RoseReviewed in the United States on October 24, 2018
5.0 out of 5 stars
I got hooked on this crazy movie
Verified purchase
The first time I saw this, I thought "what did I just watch"? So I watched it again the next day, and really started picking up on it. What a crazy campy movie. So many of todays stars when they were much (over 20 years) younger. Reese as Vanessa was great in the part and at the time she was still a teenager. Kiefer nailed Bob Wolverton, and Brooke Shields was great as Mimi. I loved her. Dan Hedaya and Wolfgang Bodison came off good as partners in the police department. And I was surprised initially that Amanda Plummer took the part of Ramona (Vanessa's prostitute mother), but she nailed it too, and I think she was intrigued with crazy roles here and there. Anyhow, I've watched it - or parts of it - at least a half dozen times so far.....I'm a true fan.
5 people found this helpful

Roadie jimReviewed in the United States on April 30, 2020
1.0 out of 5 stars
Ugh.
Verified purchase
I only sat through this because I was assembling a desk from Harbor Freight during COVID-19 and I literally had nothing else to entertain me.
I don't know why Reese has this horrible southeast accent when the movie is set in California.
I thought the little red riding hood theme was awful.
This is basically unwatchable on the lines of 1970s BBC Shakespeare made for TV content but I've been trapped inside for 2 months so it was technically human voices in the background.
3 people found this helpful

MLTReviewed in the United States on July 20, 2019
5.0 out of 5 stars
This is the most gloriously &lt;fouled> up film I've ever seen.
Verified purchase
I'm not suggesting this is Oscar® material at all, but as "drive in theater" schlock, there isn't anything better out there.

Reese Witherspoon is . . . astonishing . . . in this thing. Foul-mouthed, in-control, and taking no prisoners from start to finish. She did a lot of touchy-feely stuff later, but here she's a true B-Movie queen.

If you enjoy seeing stars before they've settled into their comfort zones and you're a fan of Witherspoon, you'll definitely enjoy this.
4 people found this helpful

TerryReviewed in the United States on July 9, 2021
5.0 out of 5 stars
One crazy ride
Verified purchase
This movie really threw me for a loop. I really liked it but surprised by all the cussing and adult language going on; definitely keep this in mind if you have kids and even teens. When I saw Amanda Plummer at the start of the movie I knew it'd be zany. I like Kiefer Sutherland and Reese Witherspoon. I have to say, I was surprised by Reese's performance. I guess I always pictured her as the 'southern belle" but here she was a wisecracking, cussing street kid. This movie to me was a black comedy in that it made over-the-top funny jokes of very serious subject matter. I admit I didn't understand the Little Red Riding Hood theme until the very end, though there were clues along the way such as Kiefer's name in the movie and Reese was usually dressed in red.

AM/FMReviewed in the United States on July 30, 2020
1.0 out of 5 stars
Reese Withersoon Cannot Act !!! At least not in this film. Maybe she learned it from Brooke Shields
Verified purchase
Put this rating system on the negative side of zero and I'd go all the way to 5. This movie is a complete waste of time and proof that Reese Witherspoon cannot act. She has no concept of putting herself in place of the character. She repeatedly misrepresents the mood of the scene. Overacts the part and then underacts, then back to overacting agian. Her fake accent does nothing for the part. Speaking of overacting, Brooke Shields does her best at it too. I've seen better acting from grade school plays.
See all reviews
Back to top
Get to Know Us
Make Money with Us
Amazon Payment Products
Let Us Help You
EnglishChoose a language for shopping. United StatesChoose a country/region for shopping.
© 1996-2021, Amazon.com, Inc. or its affiliates