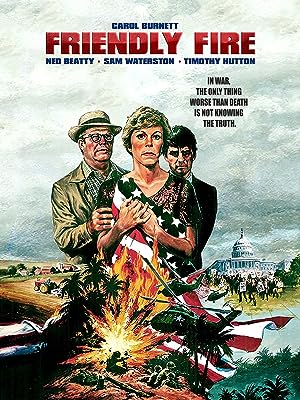 HJReviewed in the United States on May 16, 2015
5.0 out of 5 stars
FREINDLY FIRE - MEMORIES May 15 2015 by Howard V. C Co. 1/6 198 Bde. Americal Div.
Verified purchase
I purchased this movie because I was there that night 45 years ago. I watched it on TV in the early 80's.
Recently, 11 of us veterans from C Co. 1/6 198 Bde, met in D.C. for first time in 45 years. one of the vets
was severly wounded that night and wanted to find out what happened. We were able to talk about it
very easily.
Mistakes like this happen in all wars. It doesn't matter if it's small arms, artillery, or bombs, mistakes
happen. Rumors were going around that the guys who fired the round were drunk or on dope. Neither
were true. When we called a "cease fire", the guns were locked down. the guns were set correctly. It
seemed like it took forever to find the cause. It looked like a cover-up. I knew of Mike Mullen, had not
met him personally. He was in another platoon.
I don't fault Mrs. Mullen's anti-war actions, she wasn't getting any answers from the Army.
Carol Burnett and Ned Beatty did a great job in their dramatic roles. Good movie.

Don PasqualeReviewed in the United States on February 14, 2002
5.0 out of 5 stars
Carol Burnett is Superb in Distinguished Drama
Verified purchase
This is the TV movie that established Carol Burnett as an exceptionally fine dramatic actress. She gives a deeply moving portrayal of real life Iowa farmer Peg Mullen who went on a crusade to uncover the truth of her son's death in Vietnam. The scene when Peg first approaches her son's coffin is emotionally devastating. It breaks me up in tears every time I watch it. Carol received critical raves, an Emmy Award nomination as Best Actress and the People's Choice Award. Such is the power of Burnett's performance that she totally erases the image of the wonderful clown of her wildly popular 1967-1978 variety show. She gets outstanding support from Ned Beatty as Peg's husband, Timothy Hutton as their younger surviving son and Sam Waterston as the investigative journalist. The movie is among the most distinguished ever made for television. It won the 1979 Emmy Award for Best Drama.
28 people found this helpful

Heather T. Raymond (and Henry)Reviewed in the United States on January 31, 2014
5.0 out of 5 stars
Yes these things happened--zero exagguration
Verified purchase
I was a forward observer-and a radar operator-,I PERSONALLY DIRECTED artillery and I saw no errors in this movie, Near Hue, and Phu-Bai I operated an AN-Tps-25 artillery anti personnel radar...and I mean nightly, 100's of HE 105 rounds--per shift (2 hours).
They wanted us to work in 2 hour shifts--no other major duties--because the command wanted us to be "sharp as knives" while performing.
In spite of all this, there would be lapses in command and field communications in things like grid co-ordinates (map locations regarding friendlies--and foes).

I still cry. We (approximately 9 men) were on Hill 101 in The 101First Airborne, 1971 ,
I cant even imagine the unnecessary carnage in the Middle East as of this writing, Jan 31 2014.
WATCH this movie. PLEASE. And thanks for your time.
3 people found this helpful

Mark D. SmithReviewed in the United States on November 8, 2009
5.0 out of 5 stars
Friendly Fire
Verified purchase
Peg Mullen was a friend of mine and she died recently. She was 92 years old and had fought the good fight against military build up which result in young people around the globe dying in war. I was sad that I would not be able to see "Friendly Fire" about her life and the efforts she took to fully account for the war in Vietnam. I was able to purchase this German version on Amazon and as a result, play it on my computer. It brought back all the memories I have of Peg (Carol Burnett does an outstanding job of playing her), her fight, and the times we lived through. I highly recommend this DVD to anyone who is interested in the Vietnam War and its impact on ordinary American families.
9 people found this helpful

Donn UrbanReviewed in the United States on May 10, 2020
5.0 out of 5 stars
War is....
Verified purchase
Good acting I thought. Realistic story, unfortunately, in my opinion. Friendly fire happens in the confusion of war. Some is a failure to communicate. Some is ineptitude. Some is an accident. All are tragic when it ends in needless death. ...hell, most of war, especially Vietnam seems to have been needless.
3 people found this helpful

M. GeorgeReviewed in the United States on January 20, 2013
4.0 out of 5 stars
Well put together film Preachy liberal spin throughout.
Verified purchase
The movie itself is well done with a terrific cast.It was too preachy though.It reminded me of Cindy Sheehan who is nowhere to be found now that Barack Hussein Obama is running the wars in the Middle East and still in Afghanistan.Also where is the liberal media about killing with drones and killing supposedly Bin Laden?
4 people found this helpful

Amazon CustomerReviewed in the United States on July 8, 2019
5.0 out of 5 stars
Friendly Fire
Verified purchase
Never knew that Carol Burnett did a serious movie like this. Eager to see it. I have always loved watching her entertain, but it is usually comedy. So this will be a new experience for me.

Christine StephensReviewed in the United States on April 26, 2016
5.0 out of 5 stars
Friendly Fire--not so friendly
Verified purchase
Saw this movie years ago on CBS, was the first serious role that I saw Carol Burnett in. Showed what obstructionists the Department of Defense were to the Viet Nam era soldiers to the families who only wanted to know what happened. A lot of families never got a straight answer. Before your son or daughter enlist in the military, have them watch this movie.
5 people found this helpful
See all reviews
Back to top
Get to Know Us
Make Money with Us
Amazon Payment Products
Let Us Help You
EnglishChoose a language for shopping. United StatesChoose a country/region for shopping.
© 1996-2022, Amazon.com, Inc. or its affiliates