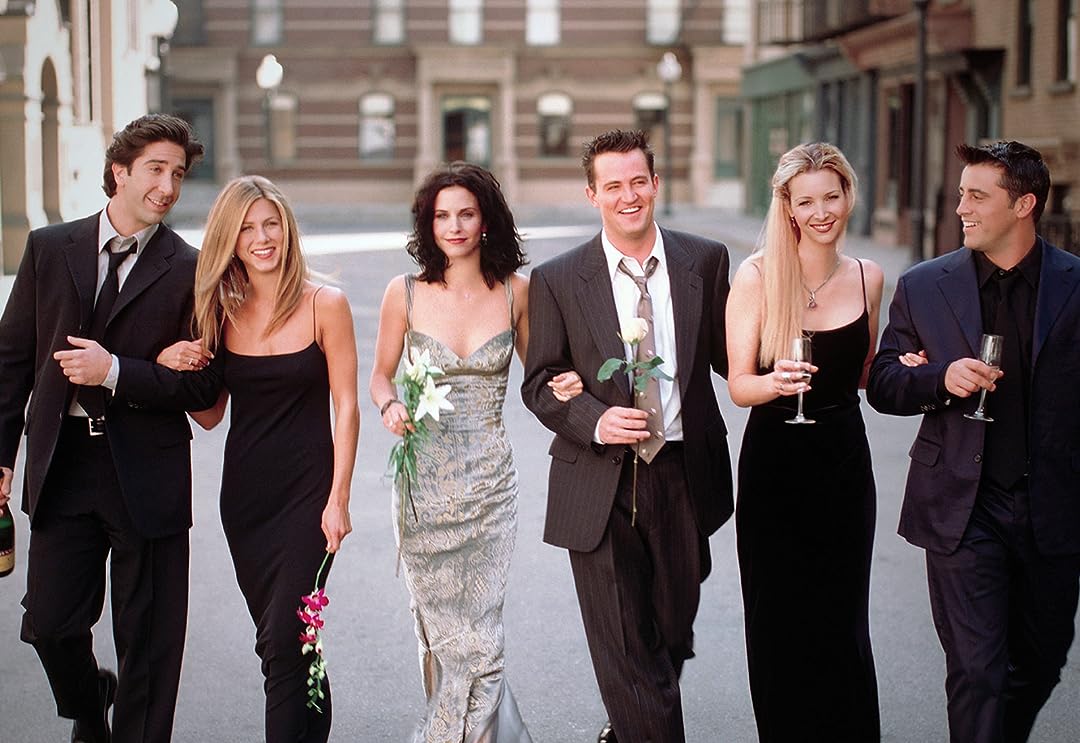 (5,868)
8.81996TV-PG
This hilarious, award-winning comedy from Bright/Kauffman/Crane Productions follows the lives, loves and careers of six young adults finding their way in the big city.

Verified purchase Reviewed in the United States on November 18, 2019
1.0 out of 5 stars
Full priced ripoff
Verified purchase
They charge you full price for this 25 year old show and they give you the over-edited, stripped down, syndicated version of the episodes. There were so many scenes cut from this season, I feel ripped off having paid full price for this show and they can't even give you the episodes that you get on the DVD's.
27 people found this helpful

NYCGal89Reviewed in the United States on January 7, 2015
4.0 out of 5 stars
Greatest show of all time, but these aren't the full length episodes
Verified purchase
To be clear, I ADORE Friends. It is the only show I can watch on repeat without ever getting tired of it! The reason I'm giving it 4 stars is that I was hoping that the episodes would include the full length time as the DVDs do (FYI: the show on TV doesn't actually play the entire episode. They cut out a few minutes worth of dialogue and plot to shrink it for TV. The full length episodes are on the DVDs.). I find myself really missing those extra couple of minutes, but I'm a hardcore fan. If that doesn't bother you, go for it! You can't ever go wrong with Friends.
24 people found this helpful

Photo Film ClubReviewed in the United States on June 9, 2021
5.0 out of 5 stars
I love this show
Verified purchase
I am a huge fan of Friends and have seen every episode multiple times, and continue to watch the entire series over and over again. Some shows just never get old no matter how many times you watch them, and Friends is one of them (Magnum P.I. and Miami Vice are my other all-time favorites).

Watching Friends is like cuddling up with your favorite pet. It helps you relax, makes you forget about your problems, and just makes you smile.

If this review was helpful, please leave a helpful vote. Thanks :)

Amazon CustomerReviewed in the United States on January 7, 2020
1.0 out of 5 stars
Question whether WB really authorized these "25" year videos
Verified purchase
I purchased so I could see the complete episodes and see some behind the scene options. The quality is okay but the format does not allow me to go to wide screen without distortion (and I have a newer TV and I played with all settings to see if I could fix the view), it does not have the options to "skip" the intro song like on the original DVDs (sadly, I purchased them when they first came out, and then gave them away 6 years ago, de de de). It does have the original long version of the episodes which I what I wanted but I'm going back to the original DVDs if I can find them. The behind the scenes stuff is lacking, as on each disk there is only one episode and its the commentary only. I'm returning what I purchased so far.
2 people found this helpful

M. ReynardReviewed in the United States on February 2, 2014
4.0 out of 5 stars
Friends: Season Two
Verified purchase
The magical thing about Friends is that it gets better and better with each season. Even if you hate their perfect lives and the way things happen with them, there's something in each episode that will make you laugh out loud.

Season Two has us starting off with Rachel knowing that Ross likes her and her eagerly awaiting his return from China. However, when he returns it's not alone, and Rachel has her hopes dashed. Meanwhile, Joey still struggles to find a job, but has some bright prospects ahead. Monica has job struggles too, but her dating life takes a different turn. Chandler is still Chandler and Phoebe is still Phoebe.

Chandler's my favorite character. He's funny, has a lot of flaws, but keeps the levity. Phoebe is probably my second favorite because she's quirky. Ross is my least favorite, just because I find him annoying. But really, the whole group is needed to make this show work. Remove any one of them and the dynamic just isn't there anymore. There are plenty of unique side characters as well. They all seem to have crazy families. The actors themselves always play the parts well. They land the lines right, are fun to watch because they're good looking people, and seem to have a real passion for the show.

Obviously this isn't a very realistic show. Sure stuff happens to them that happens in real life. But I can't say I've ever encountered a group dynamic like the one in this one. Of course most groups of friends don't have comedy writers scripting everything out for them either, so I'm sure that helps with the hilarity. But it is wildly entertaining and those comedy writers know their stuff. I really do laugh out loud (multiple times actually) for each episode. And I gladly have a night of no sleep if I'm in a particularly good season. It just has that power.

I enjoy Friends, and it's always a few week marathon of watching all the seasons over and over again. Which means I should get started on that 3rd season now!

H. BalaReviewed in the United States on June 13, 2006
5.0 out of 5 stars
Ross and Rachel rule Season 2
Verified purchase
Welcome to the sophomore season of Friends. This is where the show and its stars truly exploded onto the national consciousness. With the advent of season the second, the cast and crew had finally hit their full stride. Standouts were David Schwimmer and Jennifer Aniston as Ross and Rachel and Lisa Kudrow as Phoebe. The Ross and Rachel romance was the strong impetus of the season and had the fans very much invested in the goings-on of the star-crossed duo. But there was still ample room for the other four characters to shine. Kudrow was exceptional in episodes such as The One Where Heckles Dies and The One Where Old Yeller Dies. The best-friend relationship of Joey and Chandler is delved into in The One With the Prom Video and later in a three- episode arc (with a memorable guest star performance by Adam Goldberg). This season also introduced Monica's second greatest love and very good acting foil, Dr. Richard Burke (as superbly, intelligently played by Tom Selleck). Brooke Shields owes her resulting sitcom to her guest star turn in The One After the Super Bowl. But Jean-Claude Van Damme, Julia Roberts and Chris Isaak left fans with a tepid feeling. It goes to show that Friends is best when it's just about the six characters.

The One with Ross's New Girlfriend - the season 2 opener finds Ross and Julie an item, much to the chagrin of Rachel; Chandler goes to Joey's old tailor and is taken advantage of; Phoebe cuts Monica's hair ala Dudley Moore.

The One with Five Steaks and an Eggplant - the six are divided over money issues; Chandler picks up a wrong number on his phone and hooks up with a hot girl (the denouement to that storyline is gutbustingly funny).

The One Where Ross Finds Out - a drunken Rachel leaves a message on Ross's phone; Monica is Chandler's new trainer, a fact he soon regrets; Phoebe's date won't put out (but he is Joey's god).

The One With the Prom Video - an old video tape reveals a college-going Ross and high-schoolers Monica and Rachel (the debut of fat Monica and one of my favorite Chandler jokes "so how many cameras were actually on you?"); Phoebe states her lobster theory; Joey buys Chandler a friendship bracelet which Chandler doesn't want to wear; Monica is in need of a loan (check out the restaurant manager interviewing Monica right after the opening credits); this is truly a great episode.

The One Where Ross and Rachel...You Know - well, it's pretty self-explanatory; also, this is where Monica meets Richard (wherein Richard expounds on the intricacies of the head tilt and the head bob).

The One Where Old Yeller Dies - her mom had lied to naive Phoebe about the endings of sad films; Chandler and Joey bond with Richard; Ross freaks out Rachel with his long-term family plans.

The included special features here improve upon the first season's. This time, there are 2 episodes with producers commentary (The One With the List and The One With the Prom Video). The box set also contains an interactive map to Monica and Rachel's pad, a friends of Friends video guestbook, a trivia quiz and a dvd-exclusive, uncut version of the Smelly Cat music video. Not bad.

There's a reason this show was so well-loved and so much lauded by fans and critics alike. Come sit in for a fun chemistry lesson, as taught by Professors Aniston, Cox, Kudrow, LeBlanc, Perry and Schwimmer.

Some fun trivia facts about Friends:

The first person approached by the casting crew for Friends was David Schwimmer, the second was Lisa Kudrow.

When Matthew Perry auditioned for Friends, he had just shot a pilot for a sitcom about baggage handlers in the year 2020, which fortuitously fell thru.

The first cast member to star in a Hollywood movie is Marcel the Monkey.

The original concept of the show was to star Joey, Monica, Ross and Rachel. Chandler and Phoebe were only supposed to be supporting roles.

The record label wouldn't release the Rembrandts' album unless the band recorded a full-length version of "I'll Be There For You." The Rembrandts were reluctant to release the Friends' title tune because the band members felt the song didn't mesh with what they were doing musically.

The pilot is the only episode that shows in its entirety the opening credits sequence of the cast frolicking in the fountain. For the rest of the episodes, NBC insisted that scenes from various episodes be pulled into the opening credits, fearing that some viewers might not relate with hip, young folks splish-splashing in a fountain.
4 people found this helpful

Bria JReviewed in the United States on July 12, 2016
5.0 out of 5 stars
Five * For Friends!
Verified purchase
Some sitcoms just pass the test of time and Friends is one of those. No matter how many times you've seen the episodes, it's great to curl up and relive the stories. The box set makes it a nice gift for a Friends fan or yourself.

Like most people, I rely on honest product reviews to make purchase decisions. Because the experience of others has been so helpful to me, I try to provide honest, helpful reviews to assist other shoppers in selecting the right products for them. I hope my review has been helpful to you!
4 people found this helpful

Glama PussReviewed in the United States on June 16, 2020
5.0 out of 5 stars
Alway hilarious!
Verified purchase
Friends just never ages and is so funny! Produced by James Burrows who also directed some episodes and is known as well for Cheers and Taxi. Discs are in perfect shape, and this really helped my son and I thru lockdown over the mild flu. Highly recommend!
See all reviews
Back to top
Get to Know Us
Make Money with Us
Amazon Payment Products
Let Us Help You
EnglishChoose a language for shopping. United StatesChoose a country/region for shopping.
© 1996-2021, Amazon.com, Inc. or its affiliates