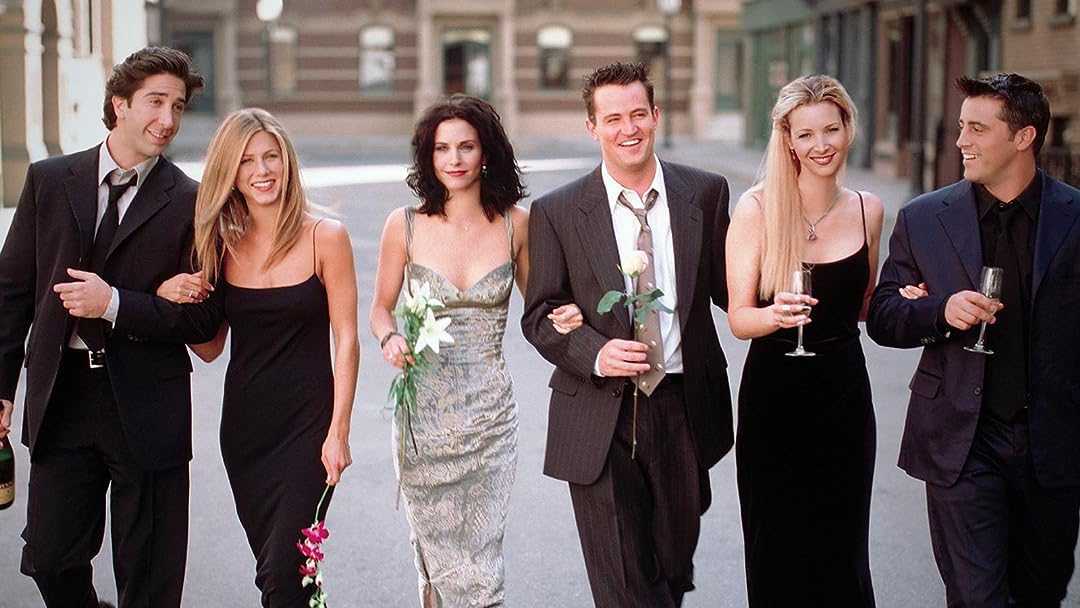 (5,182)
8.9200113+
This sophisticated, smash-hit comedy from Bright/Kauffman/Crane Productions offers a hilarious look at the anxieties and absurdities of friendship, careers and dating for six close friends living in New York City.

Craig MACKINNONReviewed in the United States on June 15, 2009
4.0 out of 5 stars
The Season with Monica and Changler's Wedding
Verified purchase
There are some sitcoms that required "growing up" before they became really good - and Friends is one of those. Early seasons had distracting gimmicks like monkeys and triplets. Later seasons relied on the performances and writing and were better as a result. Season 7 is a solid season all the way through, with the underlying theme of preparation for Monica and Chandler's wedding appearing in most of the episodes. Thus, the entire season has a narrative flow of sorts, but every episode is still stand-alone and watchable by itself.

Other reviews have listed the entire set of shows, so there is no need for me to repeat that. Some others have mentioned that the season is somewhat bland. Perhaps this is most true for those viewers invested primarily in the Rachel-Ross Axis, especially in the light of the upcoming Season 8 that re-introduces that entire storyline (through Rachel's pregnancy). I, for one, do not miss it. There are plenty of "soap-opera moments" in this season, but I prefer such moments to be centred on the soundstage where Joey is filming "Days of Our Lives".

All in all, it is a solid and very funny season. There are lots of guest stars - a personal favourite is Susan Sarandon as a soap opera queen. The box set is exactly what you'd expect if you've bought previous seasons of the show - there are a few commentaries (which often have a few neat tidbits but which also tend to cheerleading at times), there is a little quiz, and so on. However, the best part of having the show on DVD is to be able to watch it uncut and without advertisements. Friends is also one of those shows that improves when you see the episodes together - the underlying comraderie and warmth of the cast is emphasized, and it makes the inside runnning jokes funnier.

NYCGal89Reviewed in the United States on January 7, 2015
4.0 out of 5 stars
Greatest show of all time, but these aren't the full length episodes
Verified purchase
To be clear, I ADORE Friends. It is the only show I can watch on repeat without ever getting tired of it! The reason I'm giving it 4 stars is that I was hoping that the episodes would include the full length time as the DVDs do (FYI: the show on TV doesn't actually play the entire episode. They cut out a few minutes worth of dialogue and plot to shrink it for TV. The full length episodes are on the DVDs.). I find myself really missing those extra couple of minutes, but I'm a hardcore fan. If that doesn't bother you, go for it! You can't ever go wrong with Friends.
8 people found this helpful

Richard D. PearsonReviewed in the United States on July 25, 2021
5.0 out of 5 stars
Very Enjoyable
Verified purchase
I've become a big fan of Friends. One of the episodes has Monica doing a simulated experience similar to the classic Meg Ryan scene the deli in "When Harry Met Sally" and it is also well done. In addition, the DVD fit nicely in the drive and played well!

Lady AnnReviewed in the United States on November 7, 2014
3.0 out of 5 stars
not as funny, and all of the characters are becoming more ...
Verified purchase
This is one of the weakest seasons of the show. Not as tightly written, not as funny, and all of the characters are becoming more obnoxious and/or silly than charming. This is the first time I've watched "Friends" from Season 1, in order, all the way through, and it's provided me an opportunity to witness the show's slow decline over time. In contrast to the tight, bright, fresh and funny antics of the characters in the early seasons, now they just come off as tiresome. Perhaps this was inevitable as the characters aged: a perpetually dumb and clueless guy in his 30s isn't quite as winsome as that same dude in his early 20s. Rachel's constant worries about not finding a life partner just seem narcissistic, given her impossibly perfect good looks, enviable career, and movie star wardrobe. An entire episode built around Chandler's inability to smile in front of a camera? And, worse, in these later seasons, he is often portrayed as a loser, a bad joke, and as a mate Monica chose out of desperation. Ross, who has always been annoying with his nasal voice and doofus demeanor, is even more obnoxious as he apparently spends entire days guarding a section of the library where his dissertation is shelved in order to prevent coeds from becoming amorous in the presence of his words. What?! The only character who remains pretty consistently funny and refreshing is Phoebe, but even she is becoming more weirdo-strange than bohemian-quirky. There are three more seasons to go, and I honestly don't remember if the show starts to spiral up in quality once more before its swan song. I'll be there for them (like I've been there before), and I hope the writers will be there for me. Right now, however, they kind of seem stuck in second gear.

valreadsReviewed in the United States on November 20, 2018
5.0 out of 5 stars
IN LOVE WITH THIS DVD!
Verified purchase
I've been a huge fan of Friends for year but had a problem with my DVDs (Season 7 -10) so I hadn't been able to watch the COMPLETE EPISODES!!!! Now thanks to this purchase, I can watch the full episodes. So glad I was able to find this!

CalliReviewed in the United States on October 14, 2020
3.0 out of 5 stars
shortened episodes
Verified purchase
loved the price. was simply looking for one episode from this season and saw it was only a few more dollars to get the whole season. I was hoping these would be full versions of the episodes. Alas, no such luck. Lines are cut which is disappointing.
One person found this helpful
See all reviews
Back to top
Get to Know Us
Make Money with Us
Amazon Payment Products
Let Us Help You
EnglishChoose a language for shopping. United StatesChoose a country/region for shopping.
© 1996-2022, Amazon.com, Inc. or its affiliates