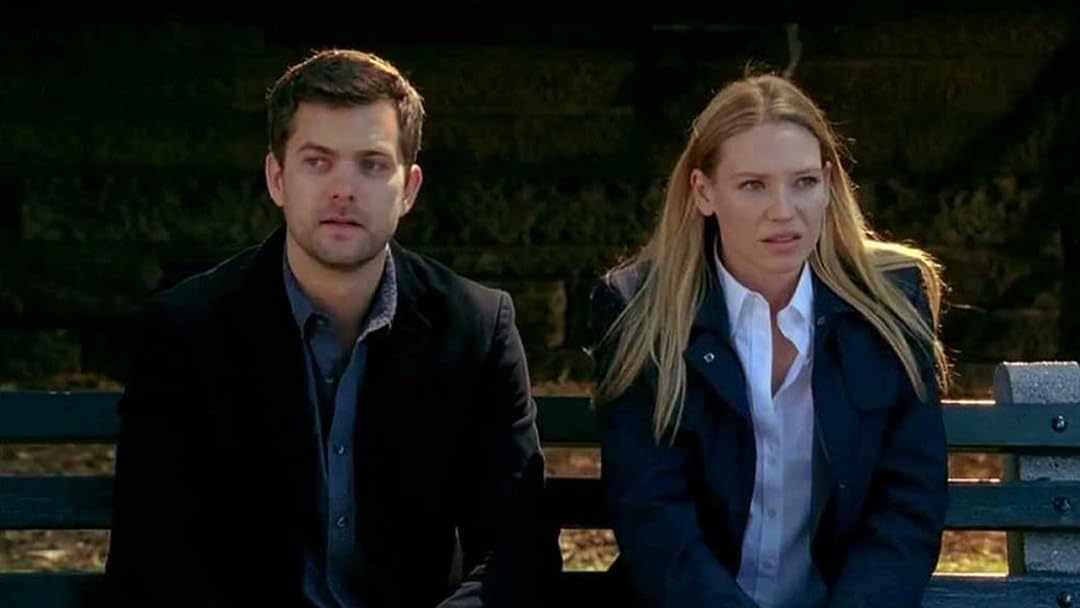 (6,851)
8.52009X-Ray13+
J.J. Abrams, the creator of Lost and Alias, teams up with Roberto Orci and Alex Kurtzman (Mission: Impossible 3, Transformers) to create this highly anticipated drama series. The first electrifying season of Fringe follows an unlikely trio who uncover a deadly mystery that may be part of a larger and more disturbing pattern that lives somewhere between science fiction and reality.

d1aneonlyReviewed in the United States on September 7, 2018
1.0 out of 5 stars
Don't Rent or Buy!
Verified purchase
My son sent me an Amazon gift card for $50 on Mother's Day to watch all 5 seasons of Fringe (he having a PhD in English:Film Studies and we both loving sci-fi). He researched the series and it was 9.99 each season, therefore equaling the $50 gift card. So I could ONLY rent, yes rent, the first season because it was on a 30-day rental period - or I would have bought or rented the ENTIRE five seasons at that time. I even went past the 30-day period because I was traveling so I individually purchased the last 2 episodes of Season 1. Then, lo and behold, I paid 9.99 for Season 2 and was informed on the SCREEN that I now "owned it." Okay, whatever - I just wanted to watch the series, which I adored. I finished it and when I went to buy or rent Season 3 - whoa! The price was now 29.99 and Season 4 and 5 the same. That is $90!! I just wanted to watch Fringe originally - was DENIED the right to purchase all at the beginning - and now I had to own and had to pay a huge amount to boot. I would call that a total SCAM since the entire series in May was listed at 9.99 per season. SCAM. I am still awaiting an answer from AMAZON on why they are letting the 3 content owners SCAM a good customer like that. I would like to be able to rent or purchase Season 3, 4 and 5 at the original price that was posted - 9.99 each! Shame on you 3 fellows for drawing a customer in and then sticking it to them. Signed, 70 year old Seattle native who watched the beginnings of Amazon in the old vet building and until now had believed they were a good thing.
128 people found this helpful

Shambhavi SarasvatiReviewed in the United States on June 21, 2016
5.0 out of 5 stars
Watch it for John Noble, and then watch it for him again
Verified purchase
Forget about worrying if the plot is plausible or implausible. You only need to focus on two words: John Noble. Before watching this show, I didn't know of John Noble, the Australian actor who plays the "mad" scientist, among other roles. He is simply a great, mesmerizing actor, full of wit, nuance, charm, heart and intelligence. He's also a very physical actor, able to "tell" his characters with wonderfully subtle gestures and expressions. I have watched the entire series through twice, and I don't think I will ever tire of his performance.

That being said, I also liked the rest of Fringe. The actors are all good, if not great. The story lines are generally good, with maybe a tad too heavy emphasis on icky skin eruptions during the first season. The arc story is fascinating. It does improve with age. I'm not a big fan of J.J. Abrams: the L.A.-style pretty people, the schmaltz, the xian savior themes that pop up out of nowhere, the obsession with broken father-son relationships. But here, it all feels a bit more real, and the obsessions are working for the show, not against it. One of my all-time faves, and for Orphan Black fans out there, definitely one of the precursors.

ravanwReviewed in the United States on September 13, 2016
5.0 out of 5 stars
Went from Prime to purchase overnight! That was so wrong!
Verified purchase
Started watching this series a couple weeks ago on Prime. I have been enjoying it and looking forward to watching the entire series. I watched Season 1 episode 14 on September 10th. I went to start episode 15 on September 11th and IT'S NO LONGER ON PRIME! It switched from PRIME to non-prime overnight with no warning. This really frustrates me. I will not buy the episodes, so hopefully this show will become Prime again soon. This is the first time I have been disappointed in Amazon. 5 stars for Fringe. 0 stars for Amazon.
98 people found this helpful

ALUMINUM RADIATOR SUPPLY LLCReviewed in the United States on October 3, 2017
5.0 out of 5 stars
If you're an X-Files fan this is for you
Verified purchase
For anybody who was watched this they will agree with this synopsis. I have a feeling that this was story boarded in a much different timeline. I would've had this start with the main character Olivia Dunham as a little girl for the first couple of episodes or maybe just one. It would have made several of the later season episodes unnecessary. Some of the back story flashback episodes took up too much storytelling time that would not have been needed to be used at the first season had these episodes in them. But executives at the network One-A-Day slamdunk action-packed episode for the pilot episode, and I'm sure that the producers were talked into this. This does not make this series unwatchable. Quite the contrary. This first season does not get to the need or the heart of the whole series premise so be patient the best will get to reveal itself in seasons two, three and four. Not an exact clone of the X-Files which dealt with aliens but awful darn close. If you're an X-Files fan this is definitely right up your alley. A must watch but be patient. Seasons two and three are by far the best.
24 people found this helpful

Mike S.Reviewed in the United States on March 22, 2022
5.0 out of 5 stars
A great first season
Verified purchase
Fringe was a very unique series that ran from 2008 to 2013. It was part police procedural and part supernatural thriller that involved a division of the FBI headed by Lance Reddick's character Phillip Broyles that investigated a series of strange phenomena that would come to be called "The Pattern". Anna Torv played FBI agent Olivia Dunham who investigated Pattern incidents with the help of a scientist who had been in a mental hospital for years named Walter Bishop (played by John Noble) who had studied similar incidents before he went crazy, and his son Peter (played by Joshua Jackson of Dawson's Creek fame) who was basically Walter's babysitter after he was checked out of the hospital. Of course, there was much more to the plot as the series unfolded with a lot of twists and turns. It was created by JJ Abrams, so it has a somewhat similar feel to the series Lost, although in a totally different context. If you take Lost and mix in a bit of X-files and even some Twin Peaks, that is kind of what Fringe gives you. That said, it is definitely its own show and was not derivative of anything else at the time. It is a cross between a case-of-the-week procedural series and a serial series with a long arc that stretches through the season. Events in one episode most definitely impact other episodes down the line, so you really have to watch it from the start to get what is going on. The season ends on a pretty big cliffhanger and teases the introduction of a character that is played by a Sci-Fi icon.

For those who get the Blu-Ray set, the show looks and sounds great in HD. It definitely had, and made use of, a health special effects budget, and it is definitely worth watching in the high-definition format. The extras include commentary tracks on select episodes, several making-of and behind-the-scenes featurettes, and deleted scenes for many of the episodes. About an hour and a half plus of material (not including the commentaries).

While I cannot say the series will appeal to everyone, if you are a fan of the sci-fi/fantasy genre, chances are you will like it. It is a unique series in that not everything is made up. It actually does include some actual scientific concepts and then mixes them with totally made-up sci-fi stuff. It does have some violence and some gross visuals, but not much in the way of sexual content. It is very well written and acted, and definitely worth checking out.

OleEngineerReviewed in the United States on July 7, 2019
2.0 out of 5 stars
Defective discs in set!
Verified purchase
Love the series, disc quality terrible-multiple episodes with random pixalation, (up to disc 5 so far) two episodes freeze and lock up. Am going to try contacting manufacturer and see if they can replace defective discs. I am getting gunshy about buying whole seasons, a as I don't have time to watch a whole season in time to return defects before return policy expires. VERY disappointed.
9 people found this helpful

TBI - Sisyphus The Lotus-EaterReviewed in the United States on March 31, 2021
1.0 out of 5 stars
I doubt I'll ever buy a used anything disc again from. This series however is 5 Star Fantastic!
Verified purchase
Fringe: Season 1 Fringe: The Complete First Season (DVD) from Decluttr Store. I watched a disc two discs and then found trouble. They pointed out that was the time to return had passed. They looked like new all refinished. A few disc didn't play they had scratches that went in grove harder to spot when they look so nice and polished. I bought these for my daughter she loved this series.
I have bought a music disc that was perfect. DVD and Blue Rays are nicely priced. I buy lots of used DVD's at stores were I can look at them first.
Buyer beware.
2 people found this helpful

B.MReviewed in the United States on August 29, 2016
4.0 out of 5 stars
"Fringe" TV Show
Verified purchase
I have watched the show in the past, but never got to see all episodes. The overall theme of secret experiments, types and idea of multiple universes is absolutely fascinating. It is very easy to imagine they could be real.

I enjoy the scientific explanations of the experiments; they lend the concepts more credibility. Viewers really have to pay attention to not miss hidden clues or a tiny moment.
The symbols they show, e.g. the hand, frog, etc. are actually a cypher. Pretty neat. You may find yourself getting sucked in because you want to know what's next.

Love Leonard Nimoy in the role of William Bell. Perfect actor for the character.

I would give it 5 stars, but a few episodes I find a bit cheesy; not really cohesive with the other episodes.
11 people found this helpful
See all reviews
Back to top
Get to Know Us
Make Money with Us
Amazon Payment Products
Let Us Help You
EnglishChoose a language for shopping. United StatesChoose a country/region for shopping.
© 1996-2022, Amazon.com, Inc. or its affiliates